So far, most people seem to be in agreement that Sideswipe was one of the best new designs of the movie. Perhaps this is why he is next in line for the Human Alliance subline. Paired with Sideswipe is Tech Sergeant Epps.

When Sideswipe arrived on Earth, he was a raw, untrained fighter, used to battling alone and outnumbered. He was teamed with Epps so the tech sergeant could whip him into shape as an effective member of the strike team led by Ironhide. The two have become good friends. In combat, Epps' combat-hardened instincts direct the speed and cunning of Sideswipe with devastating effectiveness. 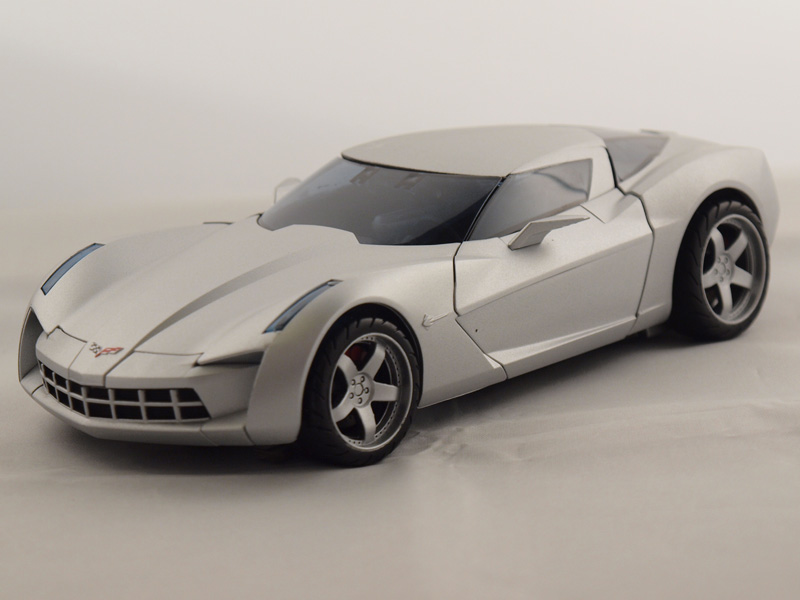 Sideswipe remains the Corvette Centennial Concept. The lines are much cleaner in this larger form, so it lets you appreciate the beauty of the design. You would think that with a larger scale would come better detail. Surprisingly, that's not the case here. The only enhancements are the colorized Corvette emblem on the hoof and the blue headlights. 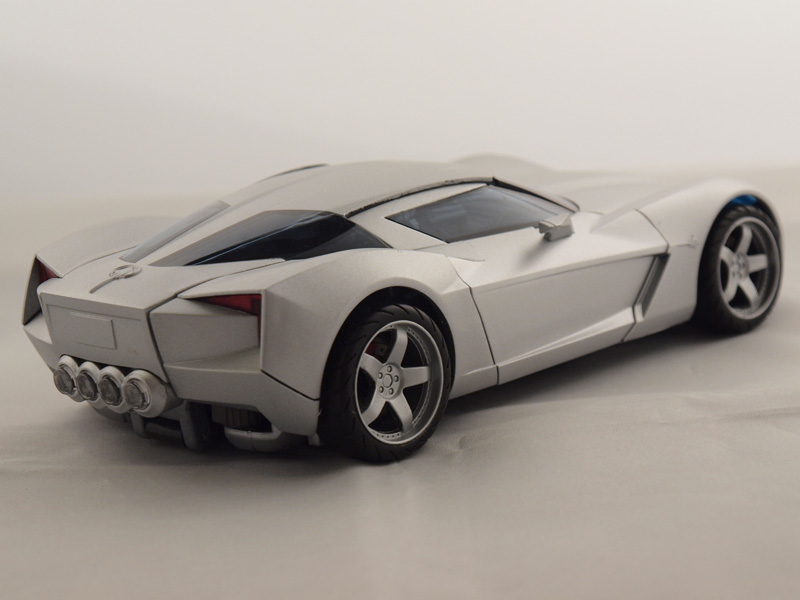 The doors are pretty simple to open and hinge on a scissor hinge. The interior is just as spartan as with Bumblebee. Just 2 bucket seats and a steering wheel. With Sideswipe, you're also treated to a partition between the two seats. The driver's seat in this case is reserved for Sgt Epps. 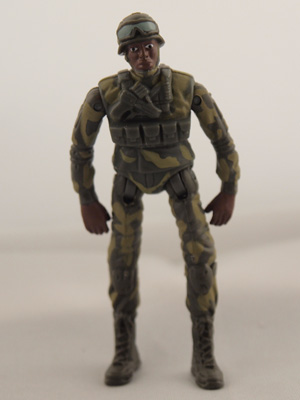 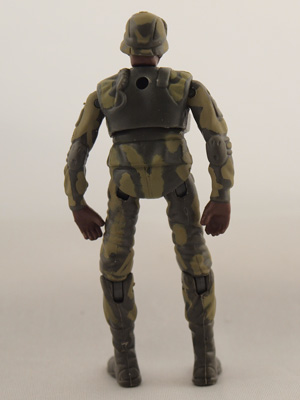 If you thought Sam had a dopey look, wait until you see the Sarge. The figure I had was even slightly crosseyed! However, Epps does gain waist articulation, even if it's at the ribline. Epps is dressed in full fatigues, including hand weapons strapped to his chest belt. Getting him to sit in the pilot's chair can be a bit of a squeeze, and the hands don't quite reach the wheel like they should.

To begin, lift up on the rear exhaust, pop up the roofline, and rotate it 180 degrees so it rest on the hood. I'll stop here for a rant. This is definitely going to scratch up the hood. What a horrible way to do this. I don't care houw careful you are, it will mar the hood up. It might be best to get a piece of thin rubber and mount it to the bottom of the rear bumper to minimize the effect. Continuing on, massage the rear wheels down at an angle. This will allow you to pull the arms out in a full wingspan. Take the fun that's resting along the back and pivot it so the barrel points to the rear. Remove the missile. Pull down on the front wheels to dislodge the legs from the hood.Dislodge the ground rails from the front doors via the front fenderline. Once you have that done, point the rear end down 90 degrees. Pull up the head. Pull the hood assembly back and away from the body.

Fold the rear end down so that the brown tab is completely hidden and the rear end connects to the Corvette insignia which makes up the chest. Pull down on the front wheels to form the lower legs. You will find a "claw" at the stub of the legs. Flip it out, then flip around the two "wheel halves" on each leg to interconnect, making sure to line up the gap in the rims to the tab on the inner faux wheel. On the inner faux wheel, you can flip the lower half of that wheel for better foot support. Position the two rear haunches accordingly. There are also 2 mini wings that are folded into the abdomen area. They serve no purpose, don't really add to the look, aren't in the instructions and are a pain to flip out. Your call on if you want to do it. Lay the hood kibble against the back as best you can, it doesn't lock in place. Fold the seats back and position the arms accordingly to finish. 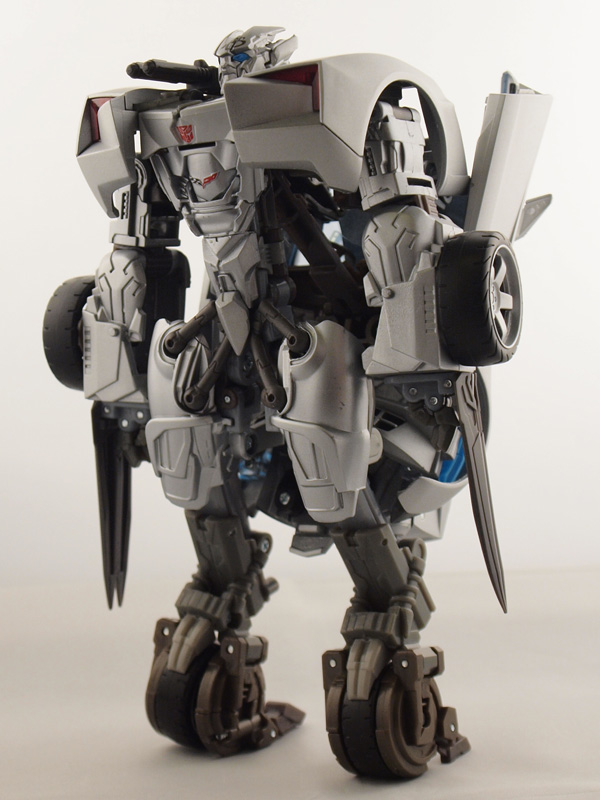 I have to admit that I'm disappointed by the end result. Granted, there are some positives. For one, the footprint is much more stable. He also has a bit more detail to him in robot mode than the Deluxe counterpart. The head is also very nicely done, complete with blue piping. That's where compliments stop. For one, the swords are now rubberized and are also shorter than they should be to be accurate. 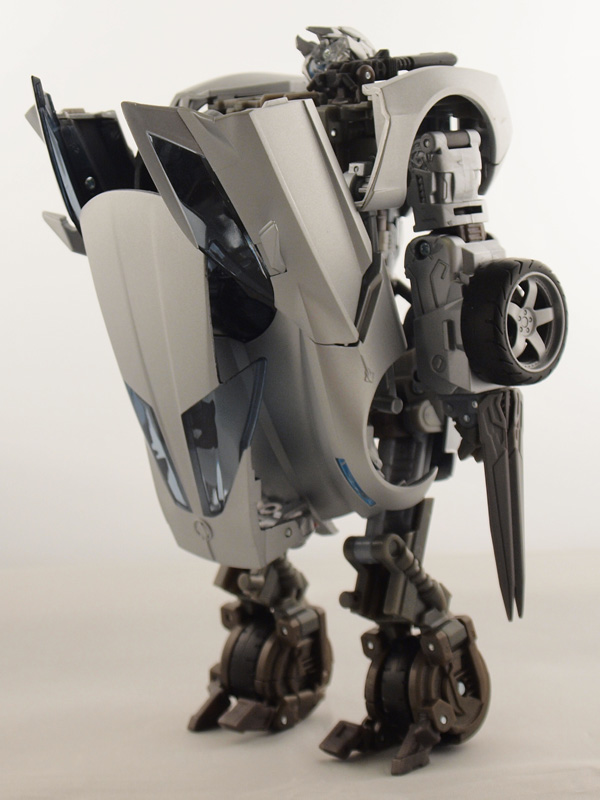 The chest area is also way too open and, if not for the ungainly back kibble, would look anorexic. The legs are also still limited by the hip strut design, which is still rubber. Finally, there is the "Human Alliance", which unlike Bumblebee is limited to one function: 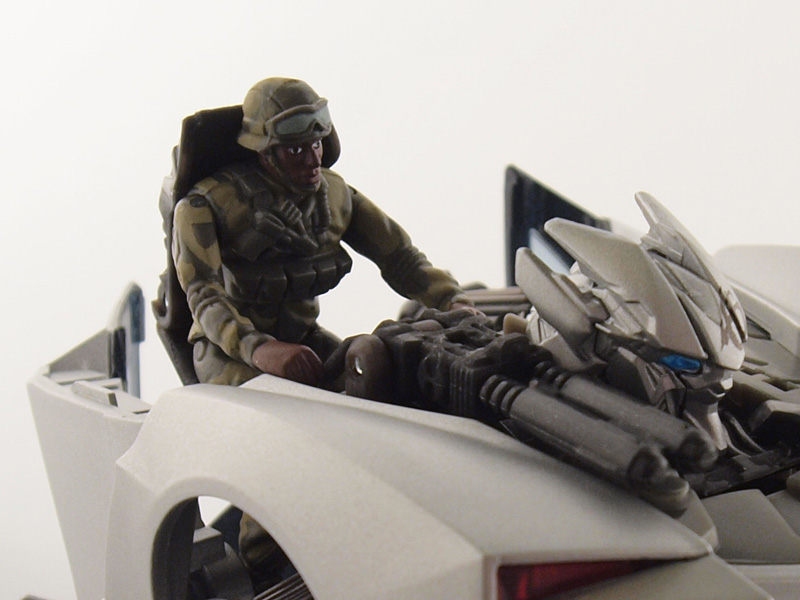 1)The driver's seat can be positioned so that Epps can ride on Sideswipe's left shoulder and operate the laser cannon.

Sideswipe has two more gimmicks. If you take the passenger seat and position it correctly, you can use a missile launcher. However, earlier images were wrong in that Epps has no way to interact with said launcher... at least, not by design. The other feature is built into his hands. By pushing them in slightly towards the wheels (which should follow with a "click") you can spin the tires and get the "spinning blade" gimmick. 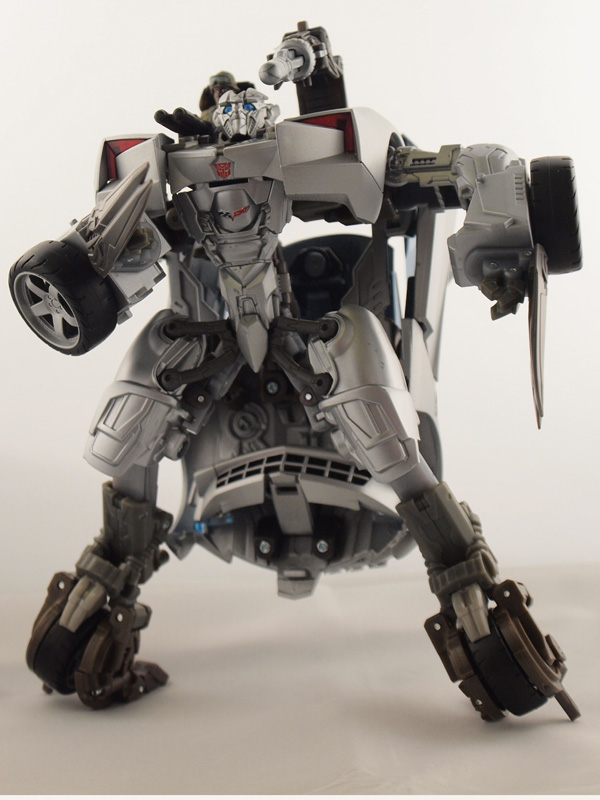 
Surprisingly, there is actually LESS articulation with this mold than the deluxe. The rubberized hip struts will hinder long term poseability.

Even better looking without all the seams of the deluxe.
Robot Mode:

Underwhelming for a Voyager class size, loses articulation and has excessive back kibble.
Overall:

A step back for the Human Alliance line, but still worth a buy just for the alt mode.