Previously, we looked at Chromia, the first of three bikebots. Now, we take a look at the second member, their leader Arcee.

Arcee jumped at the chance to join up with Ironhide and the other Decepticon hunters on Earth. She proved such an effective warrior that she was quickly given command of her own strike team, made up of robots similar to her in attitude and design. Together with the Autobots she leads, she stalks the Decepticons in silence, creeping close enough to look them in the optics before she strikes 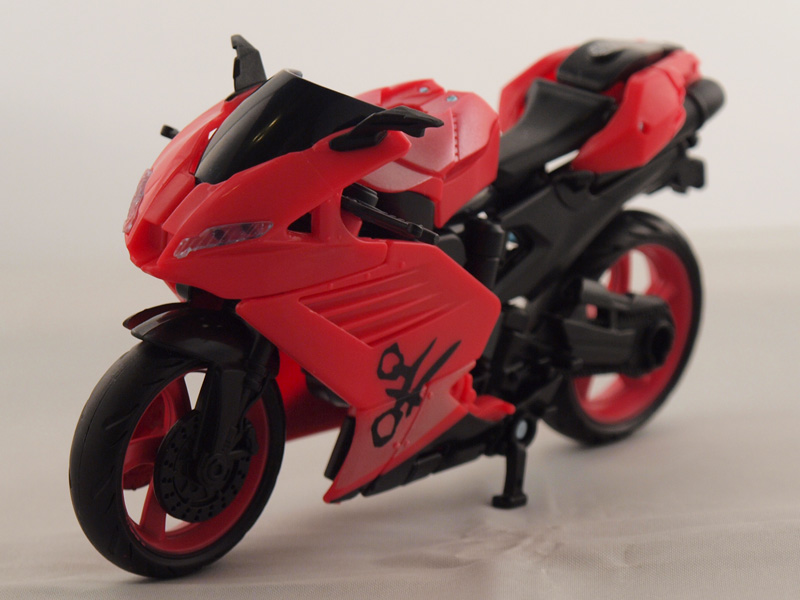 Arcee is based on the Ducti Superbike 1198S motorcycle. Color is a pastel pink with black ground effects. You'll also note what looks to be Cybertronian writing on the fender skirts. She has a sidecar that 'floats' on the left which is armed with 2 machines guns. This sidecar also doubles as a stand for her robot mode. 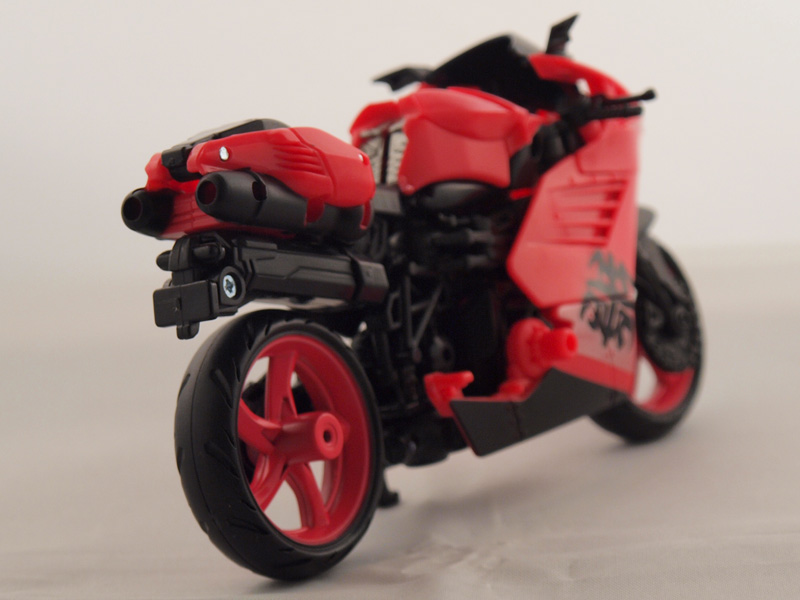 A welcome addition to Arcee is a kickstand that's usable, should you not want to display the sidecar. The details are mostly accurate to the real world bike. However, compared to the left side, the right side of the bike looks a bit barren due to the lack of a crossmember.

This one can be a doozy and make you wonder if you got it right. Start by pulling the right hand fenders skirt forward to reveal her right arm. The fender skirt collapses around the forearm a'la Jazz. Take the left fender skirt and flip it downward 180 degrees. Fold the wheels into each other so they are sideways from the body of the bike. The wheels do not peg together.

Flip out the crossmember on the left. Rotate the exhaust section 180 degrees to expose the blade. Flip the seat back until you pop open a hatch exposing her left hand. Flip that panel out, then finish with the seatback. Rotate the wheel section so that the left fender skirt faces the right side of the bike. Spread out the fuselage in a V motion then clip the right arm in place. Split the headlight assembly and two and rotate the parts to form the left arm. Pull forward and rotate the head to finish. 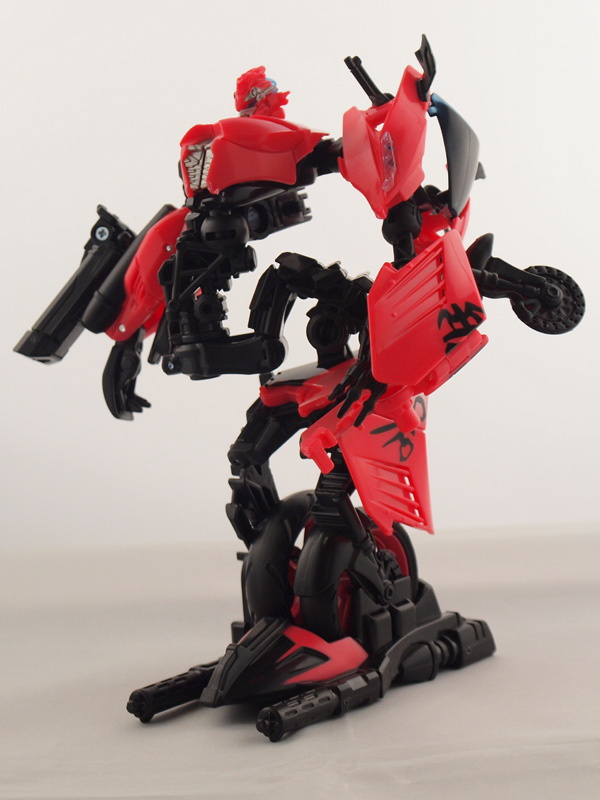 The end result is... well... a bit of a mess. It's known that I'm not much of a fan of asymmetrical designs, and this figure is the quintessence of antisymmetric. The left arm is gangly and too long, the midsection looks like it got welded by a drunkard and the overall design just does not work as a figure. At least they got the head right, including blue piping. 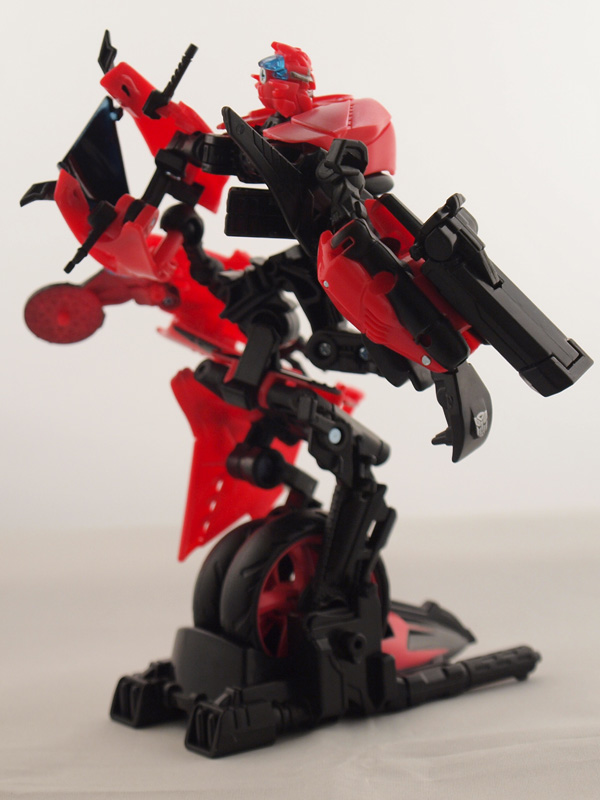 As previously mentioned, the sidecar doubles as a robot mode stand. For it to work, you need to make sure to snap the figure in place. However, I couldn't see leaving this in robot mode at all. I dare say I'd rather have Chromia in bot mode. Finally, the Mech Alive gimmick. Tilting her head forward and back shows moving gears. Weak. 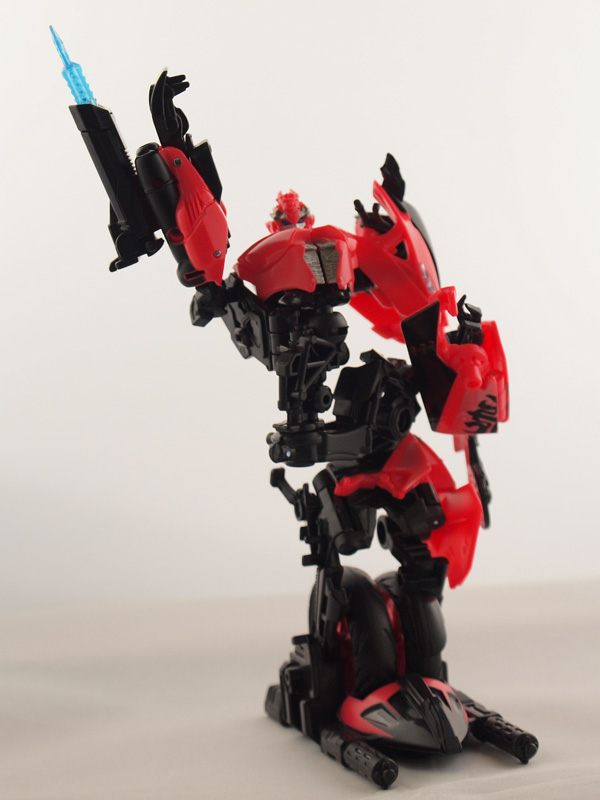 
Arms have decent ability, but the multi jointed midsection has none.

If you wanted to get this one for the bot mode, DON'T.