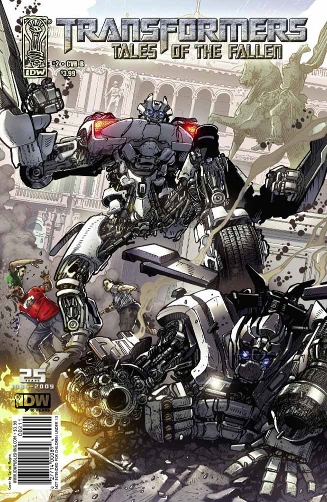 Sideswipe and Demolishor didn’t have many lines in Revenge of the Fallen, and this week, Tales of the Fallen #2 aims to show us why.

Though I think an argument could be made that Tales #2takes place during Alliance #4, it could not have happened after, and some panels seem to preclude the events of Tales #2 from happening at all.

Sadly this issue’s woes do not end with continuity gripes. Tales of the Fallen #2 is primarily concerned with Sideswipe, who shares with us an inner monologue that is meant to be an angsty and cool recollection of self discovery, but comes off more as the backpedaling of a self-centered unthinking jerk.

I suppose the targeted audience of newer movie-centric fans won’t notice, but this issues premise is a cut and paste of the relationship shared by Depthcharge and Rampage from the Beast Wars TV show, placed unevenly on Sideswipe and Demolishor. It doesn’t really suit them and runs contrary to their behavior in the film. Even Rampage’s violent goading of Depthcharge is reprised, via some surprising (and disappointingly) stilted dialog.

This issue is full of action from start to finish, as with so many of these one issue stories by necessity, by the time we arrive the fight has already begun. The trouble is that the whole comic never really rises and never really falls. The action/art never really draws you in. It feels flat.

All in all its a disappointing comic. I had to turn back to the front page to double check that I had read correctly that it was written by Simon Furman. Giving Mr. Furman (and all the writers of movie-verse comics) the benefit of the doubt, the constraints of writing compelling stories where the fates of all your characters is pre-determined or must be left at a state of status quo is palatable in all of the recent movie-verse comics. It’s just not a very ripe field for stories, or character.

Frequently with IDW’s Transformers comics, even lackluster issues will some day be part of greater trade paperbacks. This is both IDW’s genius and curse. However as this will be but one part of a collection of small stories, so far all of which, by necessity, go no where.

Tales of the Fallen, to date, seems to just be form following function. There had to be a quick post movie Revenge of the Fallen series and this is it. Maybe they should have named it “Coattails of the Fallen”.