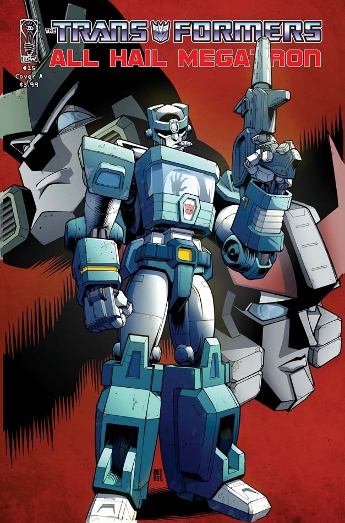 All Hail Megatron #15 is a must read for Transformers comics fans. Thus far the “Coda” series has not quite lived up to the promise of it’s namesake, the original 12 issue AHM story arc, but that’s all over. All Hail #15. Not only is it so well written and flawlessly illustrated you won’t be able to put it down, but it’s so chock full of All Hail Megatron exposition and revelation, it may make you read the original 12 in a new light.

Like all of the “Coda” series, issue 15 is divided into two stories intended to bridge the gap between All Hail Megatron and this November’s ongoing Transformers monthly. The intention being to make the beginning of the monthly a clean place for new readers to hop on. (Don’t wait new readers! Pick up the All Hail Megatron trades! Vol. 2 hits the shelves this week completing the 12 issue story arc.) Issue 15 fulfills this task beautifully, answering many of AHM under answered questions, but does it in such a fluid and fun way as to be a great read.

The first story Everything In It’s Right Place explains the rebirth of Kup, who left his Spotlight a radiation destroyed irreparable husk and entered All Hail Megatron as a cy-gar chompin, aft-kicking, commander of the Wreckers. This of course left readers with a lot of questions, all to be answered here. However this is not really a tale of Kup, it’s a tale of his unlikely benefactor, Prowl.

Nick Roche, (writer and artist of Spotlight: Kup)needs to write more comics. This story is perfectly structured, has fantastic dialog and narration, and unlike so many one issue or half issue stories, fits precisely into its 11 page allotment.

As if this wasn’t enough Mr. Roche drew this half-issue as well. Not only is his crisp style here a joy to behold, it’s evocative. There are some amazing moments of Kup’s trauma related flashbacks that change back to the style Roche used in Spotlight: Kup to show Kup’s madness. It’s so effective a visual tool to re-evoke the feeling of that book, it makes you wonder if Roche planned this in advance. Each frame is filled with visual information that informs the story and characters.

This is a character piece, straight up. No pretence of extraneous action or gimmick. It’s about who these characters are.

Everything In It’s Right Place is aptly named. It’s flawless. A solid 10.

The second entry of this issue, Lost & Found is great as well, but has a critical flaw.

Casey Coller’s art here is phenomenal, as always. Sometimes it seems the best thing about Coller’s style of G1 characters is that you hardly notice it. It’s consistent, flawless and so true to the characters you never have to question the portrayal, it’s as if he were drawing the real Transformers from personal visual reference. It’s simply what they look like, at least that’s how it feels.

The story, by IDW’s Transformer Editor, Denton J. Tipton, does it’s job amazingly. What’s most impressive about it is how much Mr. Tipton manages to cram into 11 pages.

We get answers to several burning questions from All Hail Megatron, principally, what’s the deal with Perceptor, and how the heck did Hot Rod end up with the Wreckers, and still has time for some needed subtle Drift inclusion, a space battle, and a fight with Bludgeon and Monstructor!

However, the story’s big problem is…how much Mr. Tipton has had to cram into 11 pages. The action scenes are totally shoe horned into the end, and seem only to be there to make sure this issue had some action in it. (A very responsible thing for and editor to do.) It’s impressive that with everything that’s happening and all the exposition (especially of the visual variety) that is skipped, the story is always clear. You never feel like you missed something important, but there are a few jumps in the story that are a little jarring.

The real suffering though is in Preceptor’s story. We needed more of his perspective. The choices he makes are explained, but not explored, and certainly not felt. Tipton did a great job of getting all this info into 11 pages, it’s just sad he had to do it. You could have easily had a whole issue just of Perceptor’s perspective.

I also don’t know how they managed to resist the punny title that leaps to mind for Perceptor’s shift from Scientist to Sniper, “Changing Focus”.

Overall, All Hail Megatron #15 is a great read from start to finish. It answers some of AHM’s big questions and re-informs the way you look at the whole series. Don’t wait for the monthly Transformers comic. Catch up on your All Hail Megatron.