OK, so the Twins are sort of a "love them/hate them" type of character. Looks like there's enough love to branch them out into the Human Alliance line. Skids gets first dibs at this treatment, and he is paired with both Mikaela AND Arcee.

Autobot Skids likes to think of himself as pretty capable, but the fact is Mikaela is a better driver than he is. With her behind the wheel, and him concentrating on squeezing every last bit of power out of his engine, even the fastest, most powerful Decepticons have trouble keeping up. 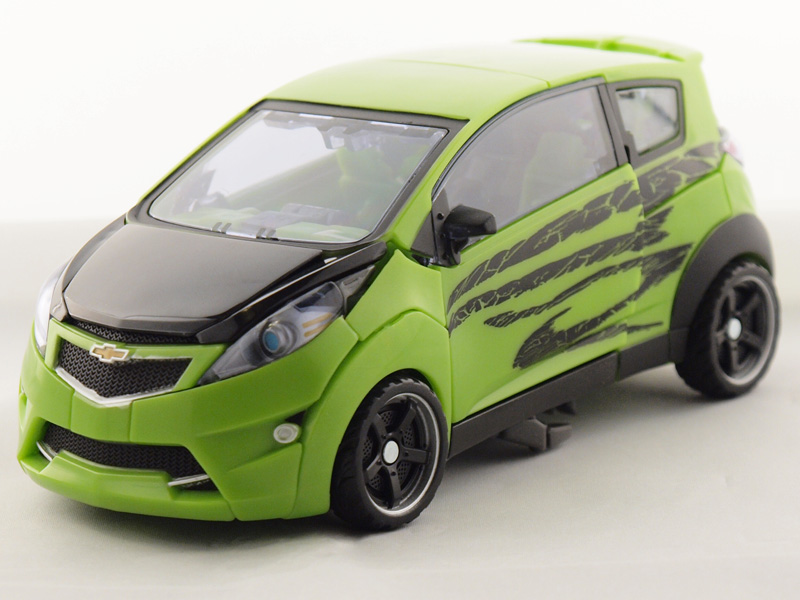 The funny thing is, there's not alot of size difference between the Deluxe model and the Human Alliance one. Scheme-wise, everything is the same. Lime green paint, black hood... even the side graphics are the same. Where the HA model excels in is detail, and the differences there are simply mindblowing. 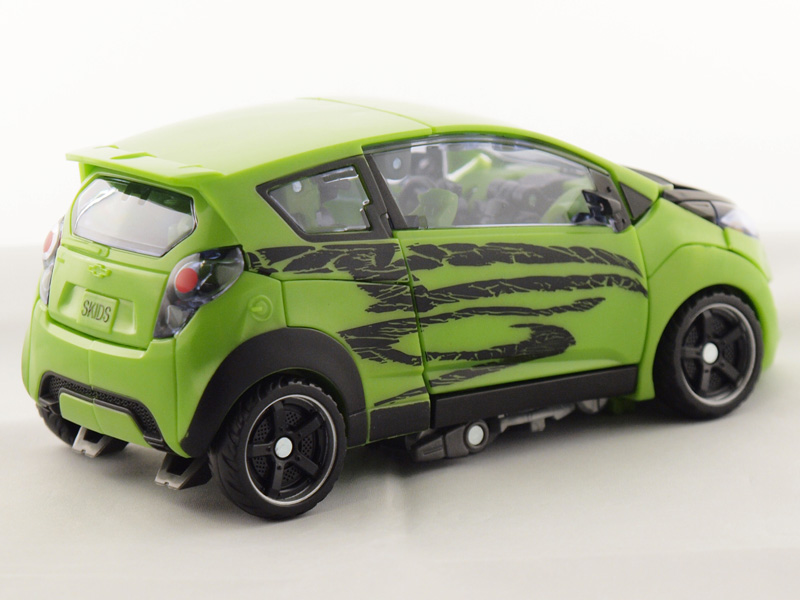 From the detailed headlights featuring Xenon bulbs to the chrome rimmed wheels to the clear taillights, the details were applied very liberally. You can even see the BEAT nameplate molded into the rear hatch. That's not to say this mold is absolutely perfect. The hands do protrude from the belly of the car slightly. Therefore, you might get some literal knuckle dragging while trying to roll him in alt mode. Now, let's take a look at his driver. 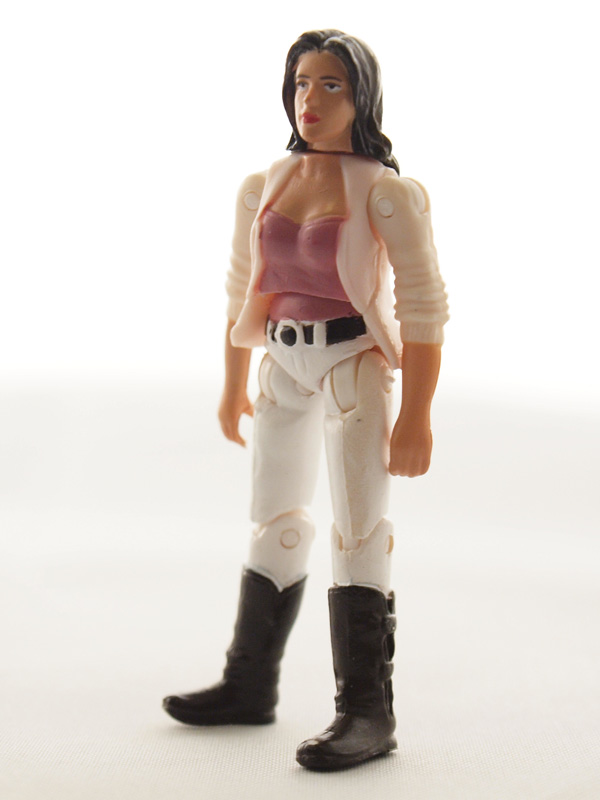 Mikaela is built like the other 2 human figures in the line, with like joint set up and peg placement. However, what sets Mikaela apart is she looks halfway decent compared to the other 2 figures. No dopey expression this time around. Oh, and in case Mikaela gets bored driving Skids around, she can also ride on Arcee. 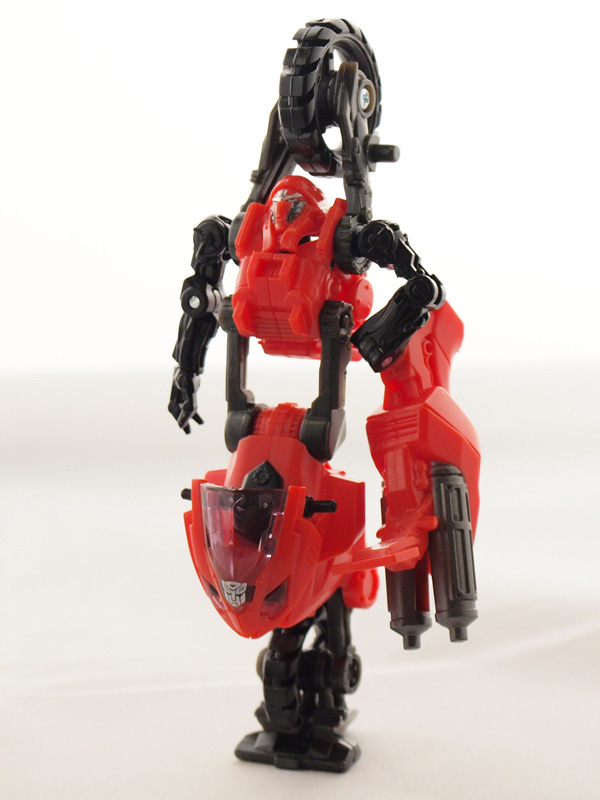 Arcee fits somewhere between a Legend and Deluxe class. Although simple in design, she actually looks better in this form than her Deluxe counterpart. The basic design is still the same, with the left gun arm and the rear wheel over the head, but maybe it's the simplicity that makes this mold more bearable.

To get her into bike mode, tuck the head into her back. Rotate her arms above her head, then cantilever the body until it snaps into the lower portion of the front end/waist. Flip the foot mount up and fold the front wheel forward slightly so the mount becomes the front mud flap. Fold in the left arm and attach it to a series of 2 pegs on the bike's body. A warning, they don't attach terribly well. Tuck the right arm under the left arm/seat to finish. 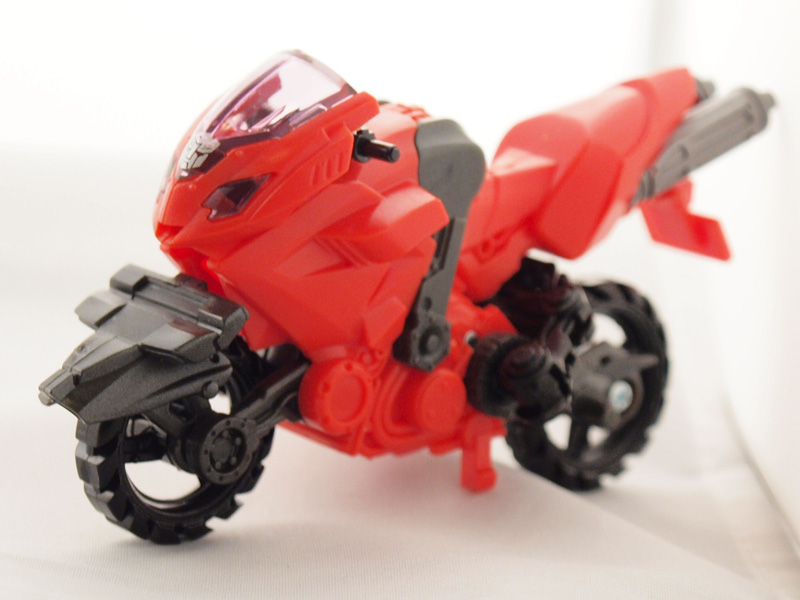 The bike mode is simple yet attractive. It'd be even more attractive if the left arm would stay attached to the bike's body. It has a tendency to pop out. This could make mounting Mikaela to the bike difficult, especially since Arcee has no pegs for Mikaela to mount on.

To start off, pull the arms down, then pull the rear quarterpanels down to expose the legs. Open both doors. In a 2 prong move, pull out then maneuver the arms in place besides the front fenders. Take care, as the joints for the shoulders are stiff. Fold the tabs above the wheel wells down into the wells. Once that's done, you'll see a tab under the front end. Pull it down. Unhook the front grille then pull the entire front end, with windshield, up and back just slightly. The windshield can pivot above the roof slightly. Once you expose that joint, rotate the front end assembly 180 degrees so it sits above the roof.

Cantilever the roof assembly forward slightly. This will give you room to pull back the legs to line up to the waist. Once that's done you can pull down the hood. The chest plate then tucks into the waist via a wide tab. On the back, take the "hook" on his front fascia and latch it under the rear tailgate. Pull the doors back and "close" them behind his back. Rotate both arms inward 90 degrees, rotate the seats 180 degrees and fold the seats down. Fold out his right hand. Fold out his feet, then pull both rear fascia halves down to form his heels. To finish up, fold both rear quarterpanels so they wrap around his ankles. 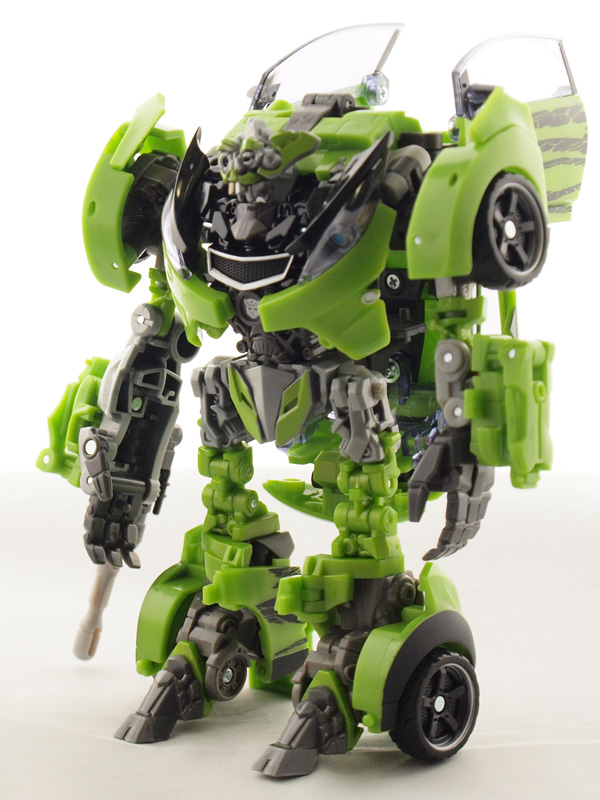 The difference in robot mode between the Deluxe and HA model is night and day. No more contrasting greens with the HA model, as the green is pretty uniform throughout. And although the head is still ugly by most standards, the AH head is a bit more true to the on screen character and is more palatable to look at besides. The clever latch that keeps the hood to the hatchlid also keeps the backpack very manageable. 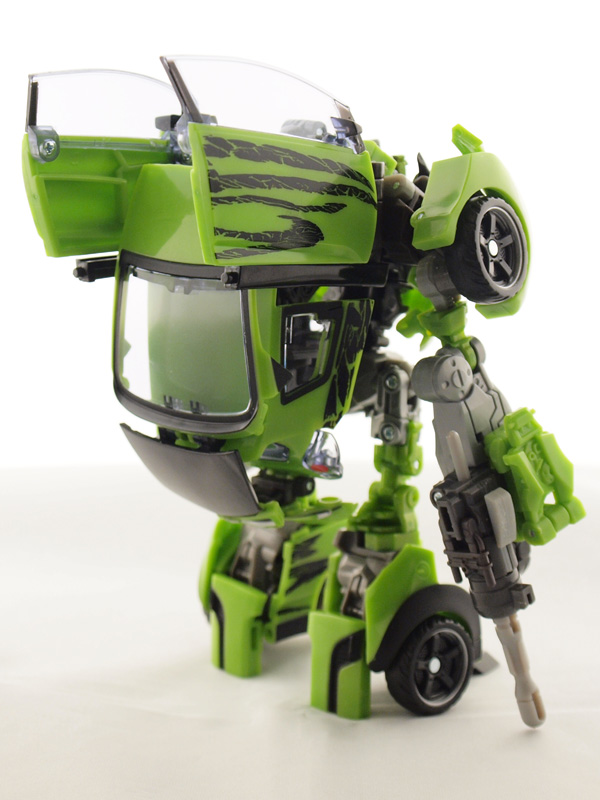 As with Bumblebee, Skids has three different ways for his human partner to interact with him. First, if you flip up the seat on his left arm, you can have Mikaela sit on his left arm. There are two more useful interactions: 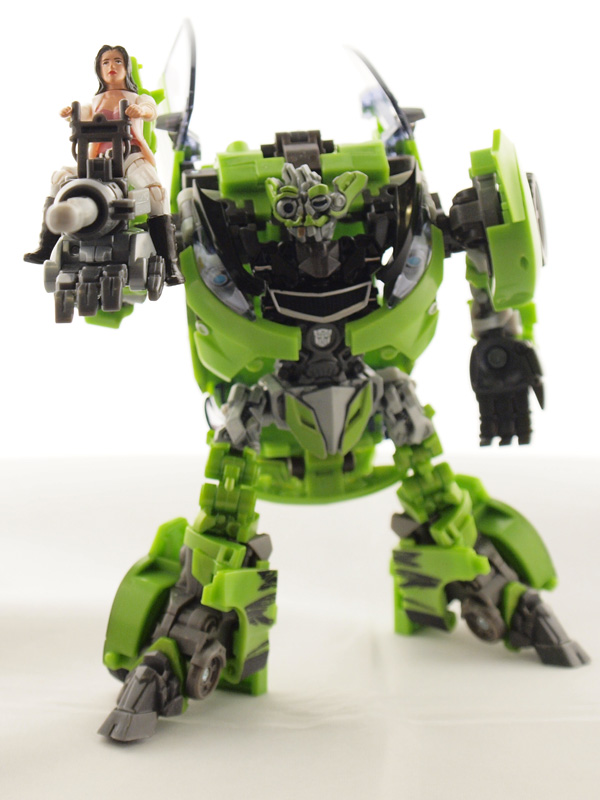 First, remove the missile from the blaster on his right arm. Flip up the seat then fold the blaster 90 degrees so it's level with the seat. Peg Mikaela in place, then raise the control stick so she can grasp it. Slide in the missle to complete the setup. This gives an all new meaning to "crotch rocket" (sorry, I couldn't resist. I get at least one joke like that, right>) as Mikaela can now "control" the blaster on his right arm. To launch, press back on the grey button to the side of the blaster. 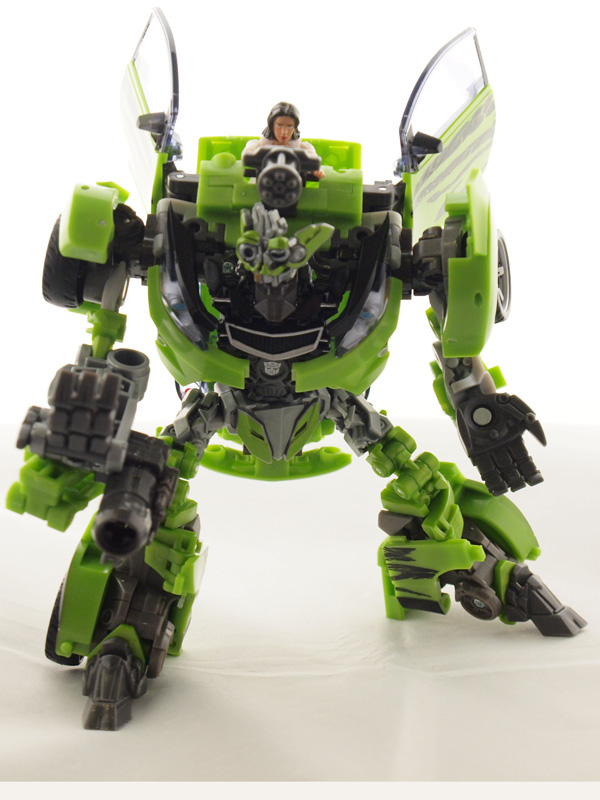 Flip the gatling cannon forward that sits behind Skids' head. Staring down his back, you will see 2 pegs that can be used to mount Mikaela's feet to. Once she's in place, graps her hands to the levers behind the cannon. Voila! Mikaela can now blast baddies with a gatling cannon.

One last trick. If you press down on the protrusion directly above his forehead, you can make his mouth move. It's simply amazing how just a slight increase in scale size can improve an already good figure even more. Once you work with this Human Alliance model, you'll forget you even have the deluxe model. It's just that good. And the fact that it comes packed in with 2 additional figures is just a bonus.


An exceptional amount of articulation with this piece. The waist is hampered by the backpack a bit, and the shoulder spread is precarious due to the tight joints. It might require fine tuning.

An improvement in detail over the deluxe model, plus Mikaela can bum a ride.
Robot Mode:

Worlds better than the Deluxe model in terms of looks and detail, plenty of playability and interaction for Mikaela
Overall:

If you didn't give Skids a chance with the deluxe model, you just HAVE to do it with the Human Alliance model. You also get Mikaela and a mini-Arcee with the deal, nothing but win here.