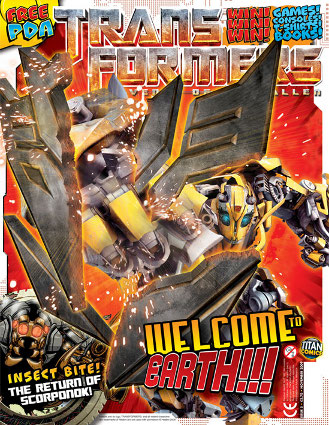 Titan Comics brings us another chapter in it’s Revenge of the Fallen prequel story, featuring Skids and Mudflap! Because we just can’t get enough of them!

This latest chapter, Reversal of Fortune, written by Simon Furman, brings us to a time just before Revenge of the Fallen as the newly arrived Skids and Mudflap try to bring vital intelligence to Optimus Prime. 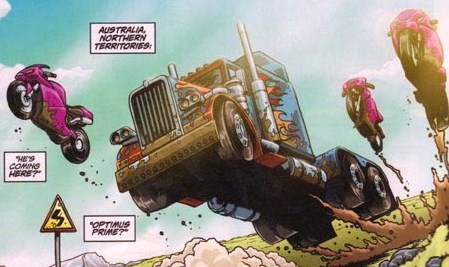 Ever notice how often Movie Prime is airborne?

It’s a good looking 11 pages with a fun chase. Prime even manages to subdue a Decepticon without removing his face or turning him into confetti.

The story however breaks down later on when Skids and Mudflap are accused of a very circumstantial bit of treason. This iteration of the twins is by far less annoying than the onscreen counter part, but these bots are clearly not the sharpest energy swords in the box. Accusations of Machiavellian scheming seem out of place. 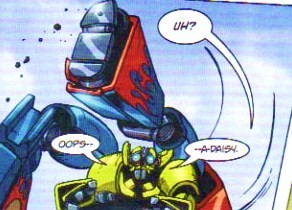 The art is sound and clear, but one can’t help but notice that this is before Shanghai and Skids and Mudflap are already in their car alternate modes.

Overall, a decent kids comic. Hopefully future chapters, featuring some of the underplayed Soundwave, will be more.

This issue also features a “PDA” with a lenticular picture of Optimus Prime, and what is a pretty spiffy poster of Bumblebee smashing a Decepticon insignia. 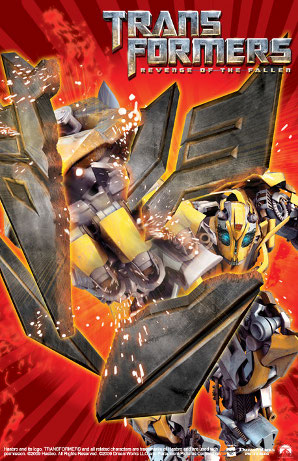