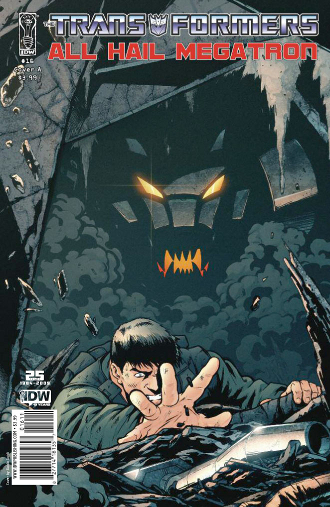 “I am the servant of the power behind the Nothing”

All Hail Megatron #16 is the end of the bridge IDW has been building between the end of the proper All Hail series and the beginning of the upcoming ongoing series starting next month. Sadly, this seems to be a bridge to somewhere we may not want to go.

The entire “Coda” series has been a little hit and miss, but this is the first really disappointing issue, which is unfortunate because it seems to grant the greatest insight into what is to come.

Like all the “Coda” issues AHM #16 is divided into two, eleven page stories. The first Man of Steel is a pile of exposition with a layer of story conservatively sprayed on top. The groan inducing full page spread of Spike being waited on by buxom supermodel nurses while he is in a full body cast looks like it belongs in a three stooges movie or the set up for a Benny Hill chase. 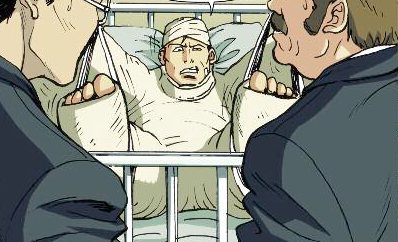 The artwork is good, good composition, and the humans are always distinct, which, lets face it is a chronic issue in Transformer comics. The story though is just light covering for placement of the Witwickys in the upcoming series. It seems after all the continuity complaints that sprang up about AHM, IDW really wanted to cover it’s bases for the Ongoing series, but frankly this base didn’t really need to be covered and the context for covering it was silly.

The second story Hidden focuses on Bumblebee, though it’s really more about the environment of Earth after the events All Hail Megatron it seems to be a few years hence, perhaps close to the “3 years later” mark the ongoing series is purported to start at. 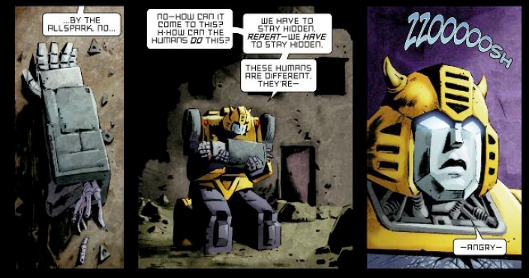 What seems to be going on is some kind of Transformer induced post apocalyptic nightmare. Some one has been watching (or at IDW reading/writing) too much Terminator, a refugee even goes so far as to refer to camps getting “hit” by “Machines”. 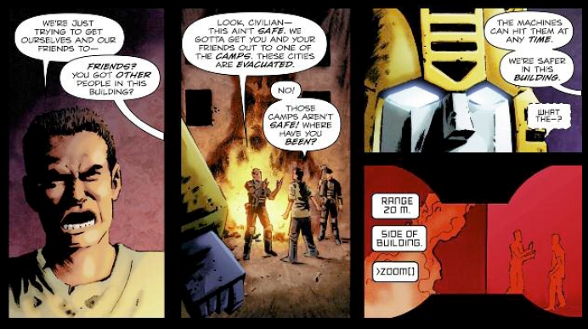 The look of this story is heavily stylized, its seem meant to be gritty. The mechanics of the story are fine, Bumblebee is in character and his fans will not be disappointed, however the setting is instant cliché. That brings us to a broader concern for the franchise, and my least favorite part of this book.

Humans with Transformer killing guns are the death knell of good Transformer storytelling. If 6 humans can kill a Transformer with hand held weapons then what the slag are the Autobots for? The Autobots whole deal is about protecting life that cant defend itself from the Decepticons. If every other jerkwater planet they come across can arm itself with hand weapons that can blast a Cybertronian, then the Autobots lose most of their (story) motivation.

It’s sad to see the underlying themes of the Transformers franchise, recently bolstered by Shane McCarthy, undercut like this in a tag on series still using his story’s title. All so we can turn Spike into the Decepticon’s answer to John Connor.

Too cool for a helmet.

This is all assuming that this issue is a good indicator of the what is to come, but I have this creeping fear of Prime getting melodramatically “killed” by human soldiers while saving someone’s kitten from a burning tree. My eyes would never stop rolling.

Overall, between the full body cast, the hooters nurses, thinly veiled yet useless exposition, Terminator rip-offs, and Transformers scared of humans with hand guns, this comic is a mess. This is All Fail Megatron.