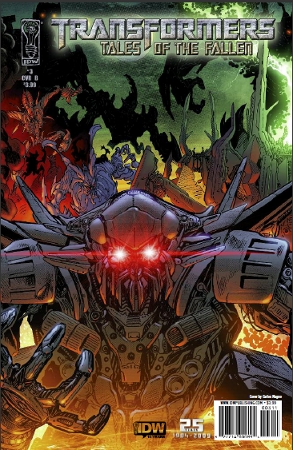 No “Coattails of the Fallen” this month. Issue 3 in the Tales of the Fallen series is a solid entry in to the movie-verse fiction, possibly because it has the wrecking balls to step away from it.

“Tales of the Fallen” is Pig Latin for “Movie-verse Spotlight” and this month’s focus is the cantankerous Jetfire. Now with character, not just caricature!

Tales of the Fallen #3 delivers on the promise of movie tie in comics. It’s a fun, relatively deep, and action packed prequel to the events of Revenge of the Fallen. Writer Chris Mowry does an admiral job trying to adhere to the continuity established in the summer blockbuster, but, to his great credit, fails to hit that mark.

Unlike so many of the recent comic tie in efforts, Tales of the Fallen #3 does more than merely play with Michael Bay’s toys. Branching out into the grey (and perhaps ill considered ) areas of RotFs back story, this issue dares to tell good story and show character, even if it doesn’t gel 100% with the film.

That being said Mowry keeps it about 90% in line. The primary difference is the establishment of Jetfire’s heroic past, a contradiction with his assertion of having done nothing worth while in life. In fact like his G1 cartoon counterpart, Jetfire’s allegiance to the Decepticons is more like a weekend long Las Vegas marriage than a life long commitment.

To my knowledge this is the first jaunt in to a time when the Primes ruled Cybertron, giving us a glimpse into “Pre-Historic” Cybertron. This issue also spends some good time exploring The Fallen’s motivations. Further emasculating Megatron, The Fallen is established as the founder of the Decepticons, and Jetfire’s brief membership seems to preclude him having known Megatron at all.

In spite, or perhaps because of, these breaks with the status quo Tales of the Fallen #3 is a solid book. Perhaps the most developed versions of either The Fallen or Jetfire that have been presented, with a dynamic character piece that does not skimp on the action.

Carlos Magno’s art, while suffering the usual movie-verse pitfalls does a good rendition of the best portrayed by ILM “Bay-formers”. Not even that can save the “primes” from looking goofy, and the pre-earth Constructicons look too much like their future incarnations, and the attempt to cybertronian their alt-modes just looks like the Master Minds from Jayce and the Wheeled Warriors. The color leaves something to be desired.

Overall, a surprisingly good comic. Good story, art, characters and dialog. Fan’s of the movie-verse are in for a treat. It gets extra kudos just for being an actual Tale of the Fallen, a novelty in this series.