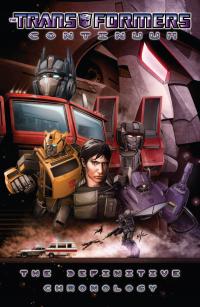 If you were looking for a good place to dive into the IDW Transformers universe, be warned, the waters of Transformers Continuum may prove too shallow. It was hoped this ad free 32 page “essential guide” would provide clarity in the some times convoluted IDW-verse, but fans hoping to catch/brush up will probably find them selves let down.

Renowned comic editor, Andy Schmidt, seems to be out of his element writing this issues prose narration of Transformers comics past. Opening with a clumsily worded forward, the “guide” devolves into a collection of captions. Schmidt can’t seem to decide how to push the information out. Strict chronological order? Issue to issue? Just important events? By story line? Past/Preset tense? Schmidt seems to think the answer is: Yes.

Jarring back and forth between broad coverage of huge arcs, to individual attention to functional minutia, Continuum reads like listening to some one tell a lengthy joke, who has to keep going back to add elements they know will affect the punch line.

The effect is that the narrative is disjointed and confusing, its hard for me, having read the comics being condensed, to evaluate how effectively Continuum will be as a guide for the uninitiated, but my feeling was one could read this issue and still feel quite lost.

Worse, unless I am mistaken, there are meaningful errors and omissions. The most glaring error is the continual confusion of Skywatch, and The Machination. Continuum seems to say they are the same organization. Skywatch plays a role in the new Ongoing Transformers series as well, it seems, in the new Bumblebee mini-series. Combining them with The Machination may leave many new readers deeply confused.

To add to that befuddlement, Continuum declares Megatron dead, though he was last shown to be on life support in All Hail Megatron #14.

There is no new art for this guide besides the cover, which sports Spike in one of the most horrendous portrayals of a human character in the history of the Transformers Comic franchise. Long time fans will know that this is something of an accomplishment in and of it self. The interior, however, is a collection of images from the comics being described. While this was not unexpected, it was disappointing.

Located at the back is the functional highlight of the book, a chronological order for all of IDW’s G1 Transformer comics to date.

Overall this book is a waste of time. IDW had an opportunity here to set the record straight on their continuity, Continuum makes one wonder if even they understand it. This was hyped as a definitive guide, but it’s just a lackluster stream of consciousness dropped on the reader’s plate like a pile of unwanted leftovers.

For Continuum to work it needed to be organized and referenceable. Where’s the timeline (by event, not issue)? A glossary? A little tech info? (Space bridges, gestalts. pretenders... Transformer killing handguns?) No such luck.

There is nothing here for those who have kept up with the story so far, and those hoping to catch up and jump in would probably be better served by asking a few questions in the forum, or a few quick searches on Wikipedia.