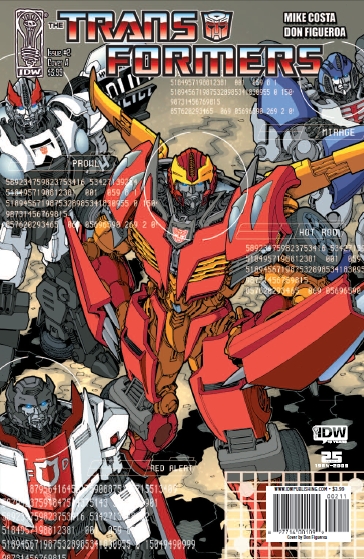 A marked improvement over the first issue, Transformers #2 offers less shocks and is all the better for it. A well formatted mix of solid story development, great dialog, and action, Transformers #2 feels more like an ongoing comic and less like an event. Not that it’s perfect, but the radiator teeth are fixed, and no one dies.

Mike Costa is really impressing me in terms of story structure and dialog. These comics are easy to read, exposition takes place in story organically. Hot Rod’s portrayal is particularly good. Costa stays true to his character, while still making him dynamic and motivated. Costa seems to understand that even reckless characters are reckless for a reason.

Apparently an upcoming issue will explain the drastic difference in the Prowl we see in this series versus his detailed portrayal in All Hail Megatron #14, but there is no evidence of it here. The only other deficency the issue has is Spike using Breakdown as his personal transport stretches suspension of disbelief. One can only hope this portrayal of an irresponsible, callous, womanizing Spike is the set up for some kind of redemption story. If Spike is supposed to actually be cool here, it’s pure fail. Right now, I hope Prime steps on him.

We also get our first taste of Decepticon interaction here. Arguably the ‘con’s are always more interesting than the Autobots. This is particularly true when the group of Decepticons is lead by Swindle.

The art takes a turn for the better this issue. The faces bear less resemblance to cadavers, mostly because the radiator style “teeth” are absent, replaced by a mostly white surface in their place. This makes all the difference and lets the brilliance of rest of Figuroa’s designs shine through. The faces are still the low point of the robots, however they are no longer distractingly unattractive.

Don Figuroa’s new take on the Decepticon cast is particularly interesting as is his portrayal of Omega Supreme. Each new character we see in this style is something to look forward to, assuming the heads continue on this trajectory.

Overall, this is a good comic. Solid story telling and solid art. Only a few (hopefully to be resolved) character issues muddle it up. If you’re planning on reading the upcoming Bumblebee mini-series, make sure you pick this one up.

This issue really feels like an ongoing, a comic that is fun to read on it’s own but that has enough loose ends and a cliffhanger to make sure when it ends, you want more when you turn the last page.