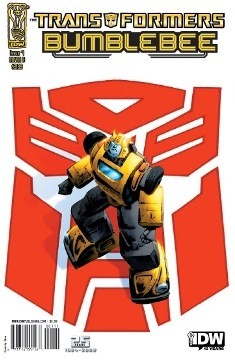 Bumblebee #1 picks up right after Transformers #2 ends. If you’re caught up on your IDW you’ll know the awkward position that leaves the 1980’s only non-annoying sidekick in. This series looks to be going some where interesting, but first we’re going to have to get through the metric ton of exposition contained in this issue. Who knew Bumblebee could talk so much? 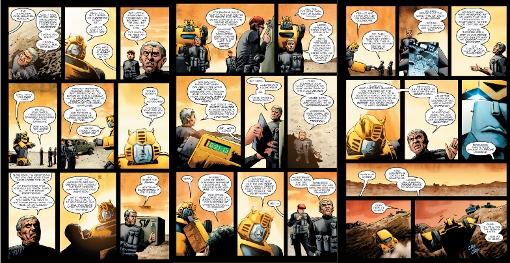 Bumblebee #1 nicely self contained, but even that comes at the price of a dump truck load of recap in the first half, only to be followed by a seemingly endless conversational set up. Zander Cannon seems to be trying to free the rest of the series from exposition by having it all here in this first issue. This will play exquisitely in the trade paperback, a big chunk of information in the first act is to be expected. Unfortunately it bogs this issue down interminably.

On the upside, it all comes together, and seems to be leading somewhere interesting. It’s just a shame the details of the story couldn’t work more organically into the structure of the comic. Hopefully future issues will benefit from this early discharge of info.

Bumblebee drives surprisingly little of the issues action, considering his name is on the cover. He seems carried along by events, perhaps as a set up later for when he begins to shape them? Hopefully we’ll see some more dynamic character development for him in the coming issues. 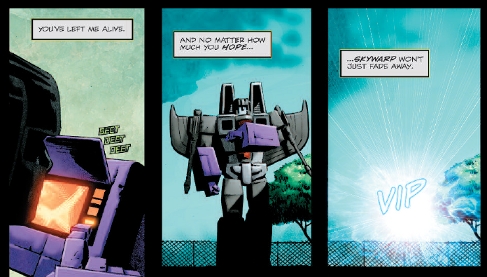 The artwork, provided by Chee, is, as always, highly stylized. So much so that it’s difficult to quantify it’s relative quality. Calling it anything but “different” seems disingenuous. It has a gritty washed out feel. Humans are distinctly lacking. However fans of more traditional designs that the ongoing series is currently showcasing will be delighted to see the cast return to it’s visual roots here.

This is not a continuity error. It is merely the differing styles of artists. IDW’s policy is to give artists mostly free reign with character design so we might as well all get used to the fact that our favorite characters may not look the same between series.

Over all this issue feels like a set up for a potentially good series, but it’s not much more than set up. It barely stands on its own as a full story. However, even if you were only planning on reading the ongoing series, you’ll probably need to pick this issue and it’s descendants up to really know what’s going on. This series looks to be interesting but it's off to a slow start. Not bad, just slow.