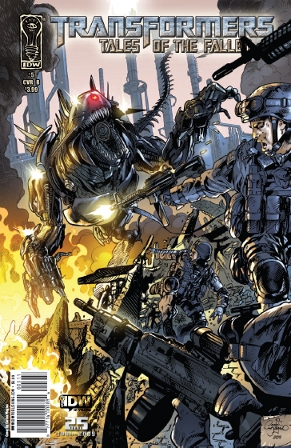 Ravage (outside of Beast Wars) has always been a Mech of few words. The same could be said of Tales of the Fallen #5, his movie-verse “Spotlight”. It works great actually, one almost wishes they’d skipped the limited verbiage in the book altogether and ran a silent issue.

This is the first IDW outing set post Revenge of the Fallen and as such is the first glimpse of the future of this section of the comic franchise, and so it follows that it’s been penned by the godfather of Transformer comics, Simon Furman, as he’s also behind the upcoming Transformers Nefarious. Mr. Furman previously mentioned that this issue would be the unofficial beginning of Nefarious in his (spoilerific) blog.

Now, some of you maybe saying to yourselves “Ravage? Post Movie? What about that whole spine rippy thing?” 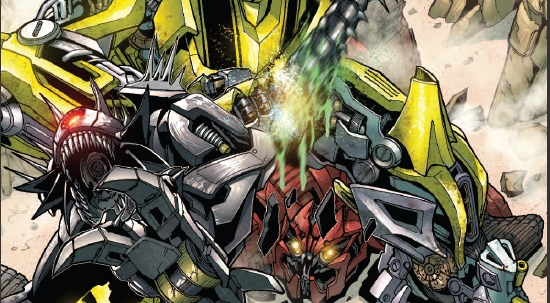 Well, that’s what this issue’s all about, Ravage’s resurrection and first mission at the behest of a mysterious “New Master”. Really, it’s all set up. This issue is here to wet your appetite for Nefarious, which it does a good job of. Readers familiar with Mr. Furman’s work on the Titan movie-verse comics know he has a unique take on how to handle the big screen bots, and a creative flair for filling in the blanks left by the films.

The art is truly exceptional in this book, which is not something said lightly in the usually visually unfulfilling world of movie-verse comics. Alex Milne has perfected the science/art of capturing the essence of the detail heavy three dimensional Movie-formers and refining it into a aesthetically appealing two dimensional medium. Also, props to colorist Josh Perez, the colors and textures really pop in this issue in a way that compliments the art, but never distracts from it.

The movie-verse has never looked better.

Overall, an excellent movie comic. A bit of a tease, but read as the lead-in it is, a lot of fun. Definitely pick this up if you’re planning on reading Nefarious.