Originally, Bludgeon was part of the Pretenders line up from the G1 Universe. While he has appeared a couple of times since, he hasn't really captured that original look. As part of the NEST subline, Bludgeon finally gets a throwback to his original G1 looks.

Decepticon Bludgeon was nearly destroyed by a fight with the Metallikato master Autobot Whirl. Forced to retreat and hide, he scanned a new vehicle mode and disappeared into the Southeast Asian jungle. He is desperate to prove himself against an Autobot, however, so he has caused just enough chaos locally to attract the attention of Ironhide. Now he lies in wait for the Autbot, ready to spring his trap and destroy his victim in an instant. 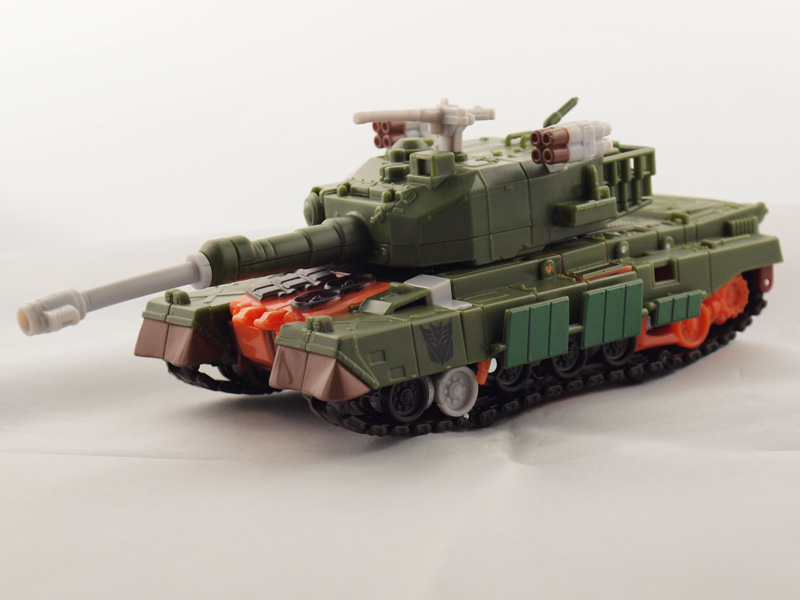 Bludgeon drops Wreckage's alt mode for that of a single barrel tank. The tank is almost entirely army green but has fluorescent orange on the front and in the treads. The main turret, roof mounted gun and missile batteries are done in PVC gray. You'll also note some bronze and black in the color scheme. The barrel is made of a soft plastic and is susceptible to warping, as the barrel of this figure was slightly warped out of the package. 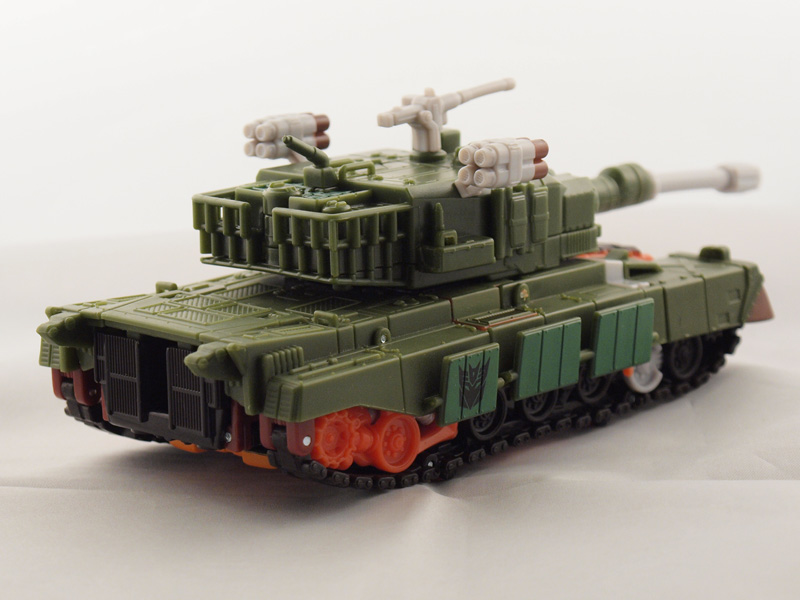 The front and rear of the treads are done in rubber, while the midsection is hard plastic. The treads are almost seamless in feel and look and is almost impossible to tell where the seams are. The turret can be rotated a full 360 degrees in 24 ratcheted steps. However, the main barrel is fixed so you can't adjust for angle. Same goes for the missile batteries, as they are also fixed. The roof mounted cannon can be rotated freely.

Bludgeon's transformation is fairly simple. Start by pulling out slightly on the rear quarterpanels of the body, then hinging the panels up and back. Pull down on the treads at the pinned wheels to separate them from the midsection. Pull on the midsection and spread both sides out and back. Spin the turret 90 degrees to the right, then lift the tail section of the tank up. Grab the midsections (legs) and flip the entire assembly 180 degrees. Fold the quarterpanels all the way back, then fold in the burgundy hip joints until they lock in place. Fold down the legs, then rotate them until the orange shins face forward. Fold up the green section behind each lower leg to flip out the feet. The upper half of that green section should be folded down to allow for knee articulation.

Pull the burgundy sections away from the orange plate on the front end. Rotate each of those sections (arms) outward. Finish folding the arms and shoulders down to the chest area. The orange top plates will then fold into the shoulders. Flip out the hands and position the arms accordingly. It may take some effort, but push down on the chest until it locks against the hips. This will expose the head. Rotate the turret 45 degree upward so the barrel lays diagonal along his left shoulder.

Depending on your taste, you can now activate one of the gimmicks. The "hidden scabbard" gimmick is activated by simply peeling the right side of the turret away from the left. This can be done at any time. 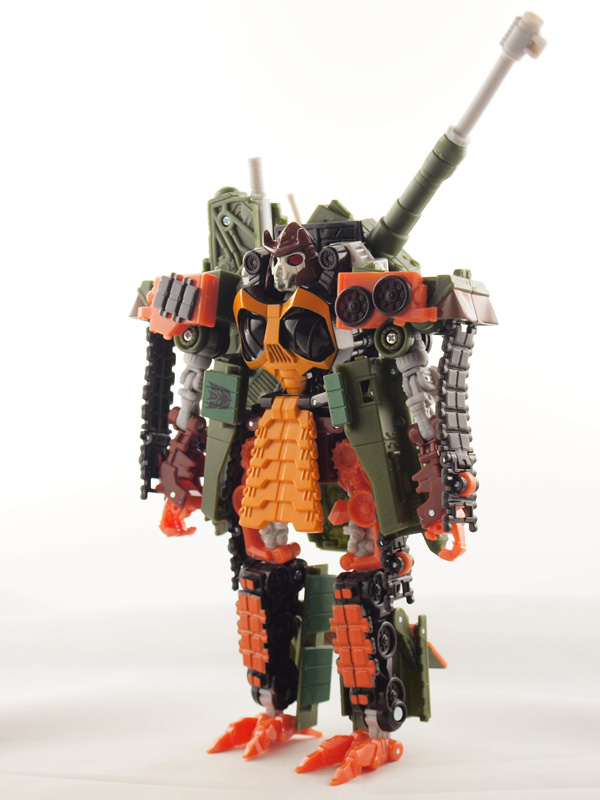 Bludgeon does recall alot of details that are a throwback to his G1 pretender shell. Most of the legs, chest and shoulders are in a bright fluorescent orange. The chest plate is very well done, inducing a skull look itself. The lower arms, as well as his cranial chamber, are done in burgundy. Many have complained about the head being too plain. From a distance, it looks that way but closer up you can note some intricate detail. Too bad the eyes are painted red with no piping. 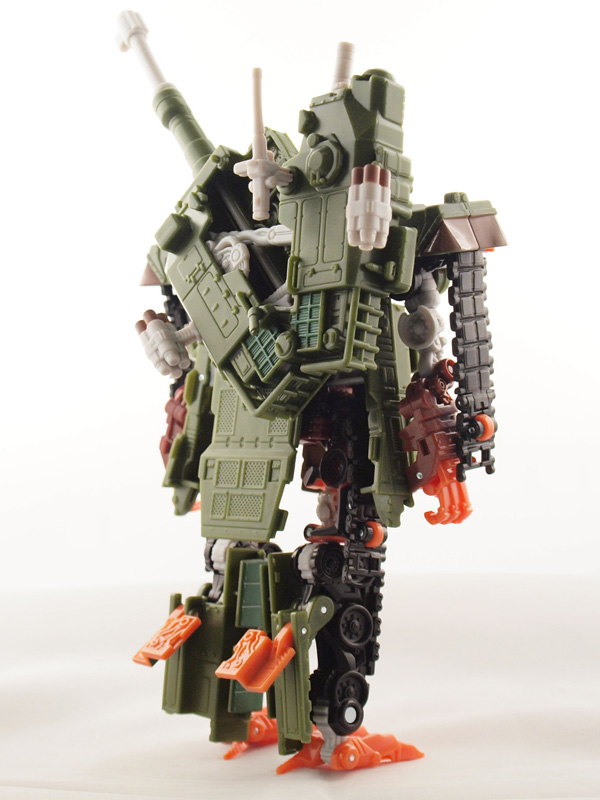 Bludgeon is definitely ready for a good sword fight. Pulling out the barrel from the turret will reveal a nice, long sword that can be position in either hand. Should that not be enough, you can also reveal a smaller sword from the scabbard, which also fits in either hand. As for firepower, he has none in robot mode. But who needs guns when your packing two swords anyways? 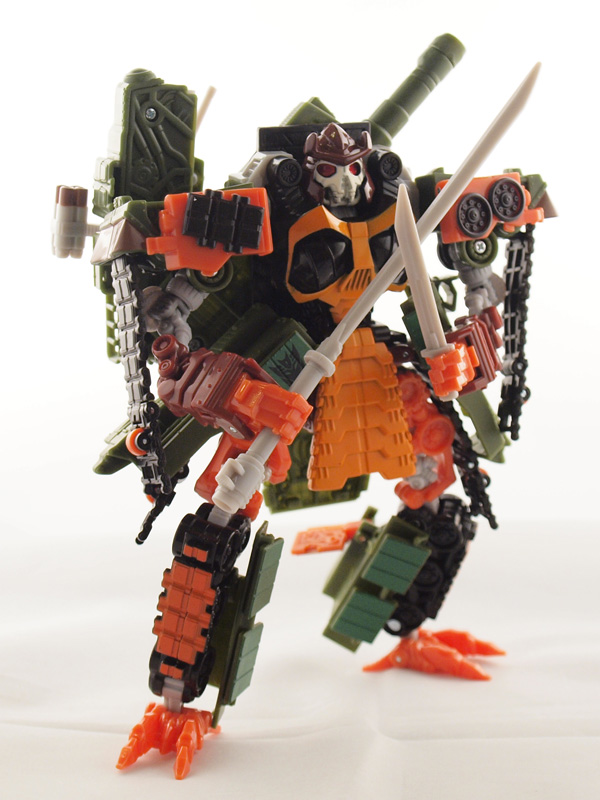 
Kibble will interfere slightly in posing, particularly in the hips and shoulders. Moving pieces around will free up some articulation

Some minor details would have made this tank one of the best
Robot Mode:

Arguably the best Bludgeon ever made.