Now that we've had a chance to look at the two new molds in the NEST subline, our next review will be on Tuner Mudflap, a repaint of the Deluxe Mudflap. It's unsurprising that a new wave of repaints is coming. I mean, Bumblebee is about to get repainted AGAIN.

There was a time when Mudflap would have been intimidated by a warrior as accomplished as Sideswipe. But now, with the final battle of the war in the past, and a hot new engine and paint job, he's ready to give the Autobot swordmaster a run for his money. Mudflap can't outfight Sideswipe, but there's no doubt in his mind he can out-drive the older Autobot. 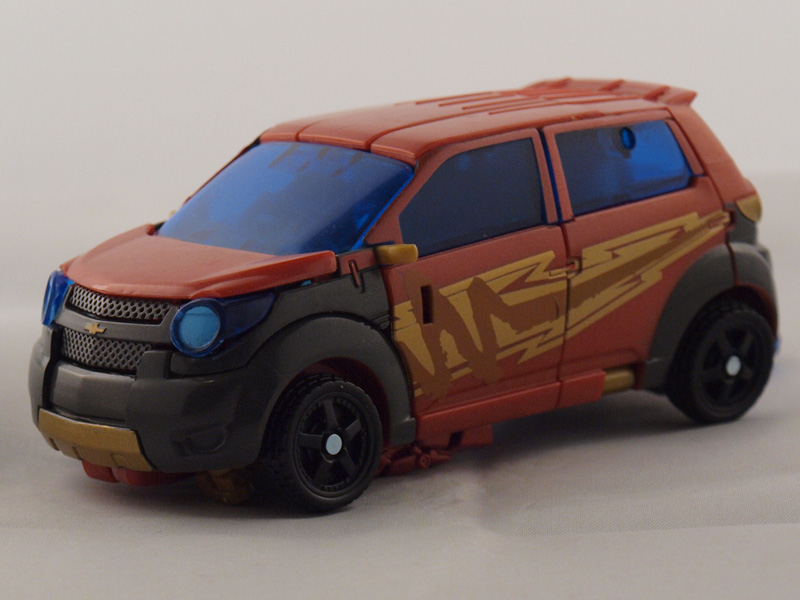 Mechanically, Mudflap remains the same with no mold changes. However, there are several cosmetic changes. The main change is with the paint job. You have to look close, but Tuner Mudflap sports a darker hue of copper than the original. Of course, the snazzy lightning appliques on the sides might not help you notice that as much. 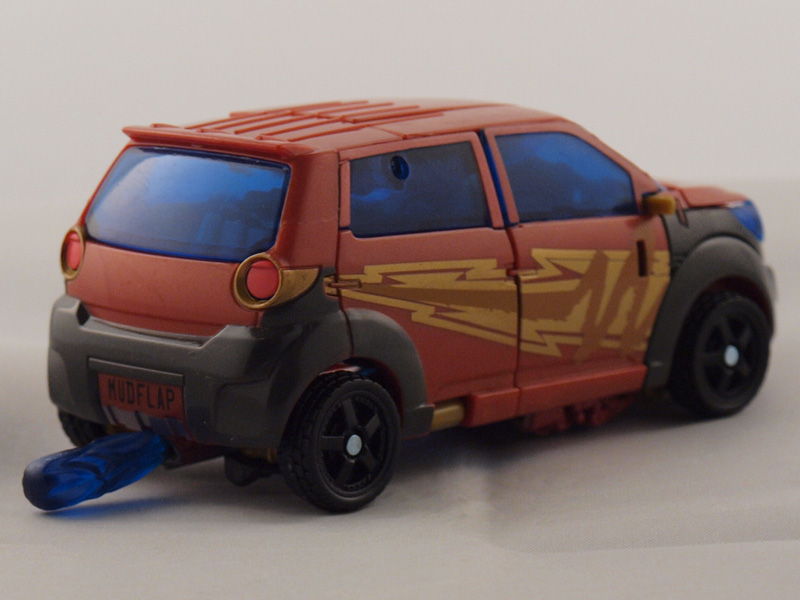 The glass on Tuner Mudflap has also been changed, to a blue tint. The blue theme is carried out to the headlights and headlight bezels. The lower airdam on the front, as well as the side view mirrors and tail light bezels, are done in gold. The rims lose their chrome trim, and instead of TRAX on the license, MUDFLAP now graces it. The last change is to the ground sill, which is now copper instead of black. 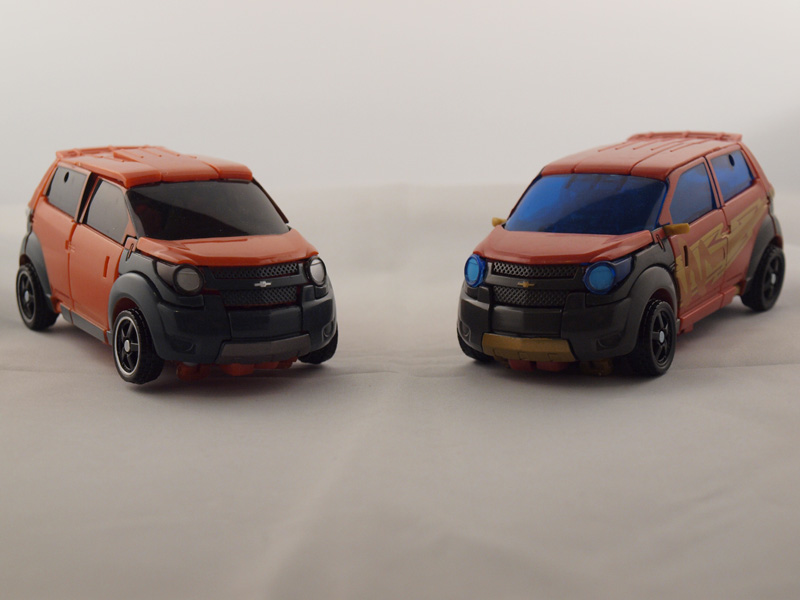 Identical to the original 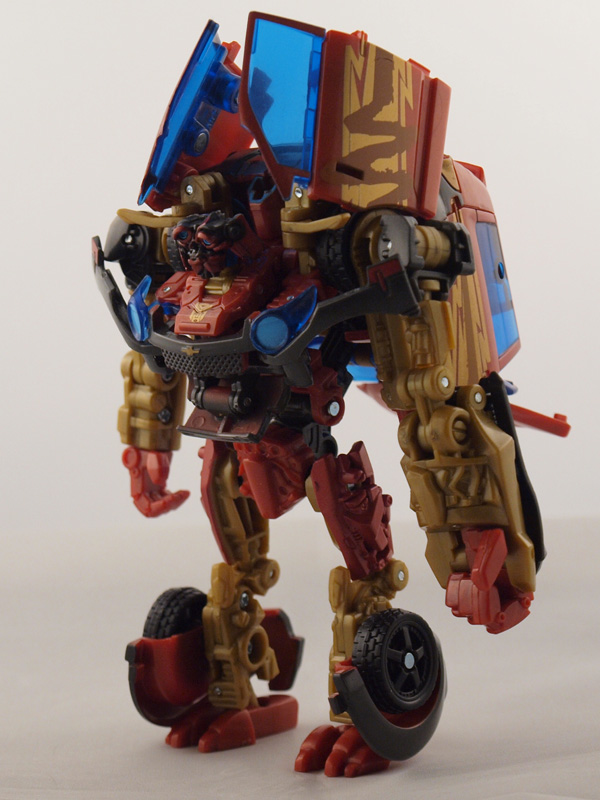 Whereas the original Mudflap came out looking rather drab in robot mode, Tuner Mudflap dresses up a bit. Most of the PVC gray areas have been replaced by gold, as well as some of the copper areas. The Autobot insignia has been moved from his waist to his upper chest area. For the most part, that's the only changes to the figure. The head, sadly, is just as ugly as ever. 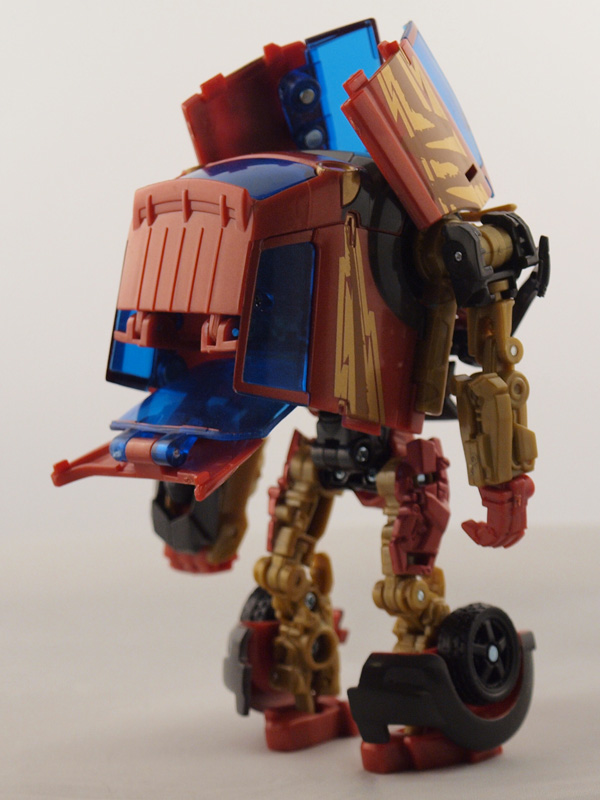 The same gimmicks apply to Tuner Mudflap. Moving his left hand in will expose the missile launcher. Pushing in the grille will nod the head and move in the headlights a bit. Already a good overall figure, Tuner Mudflap benefits from a more striking robot color scheme. For those who like the tuner look, the car mode gets an improvement as well. 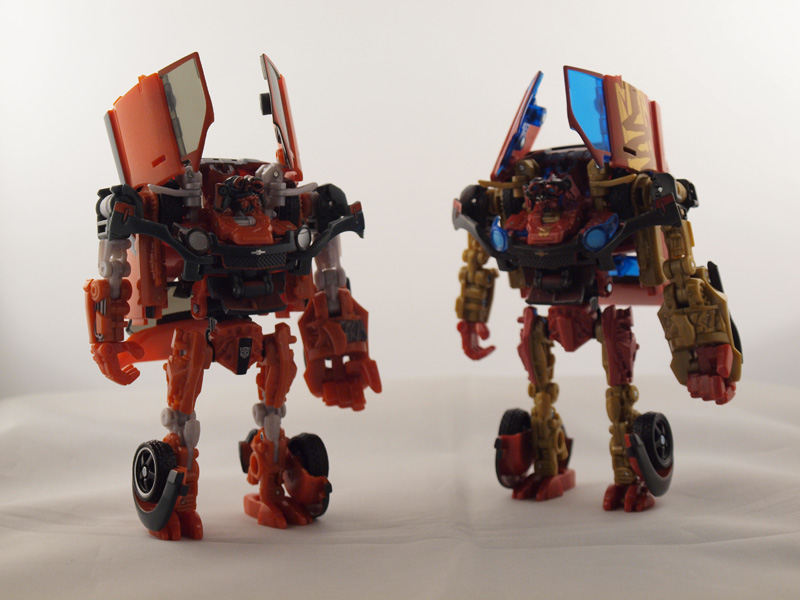 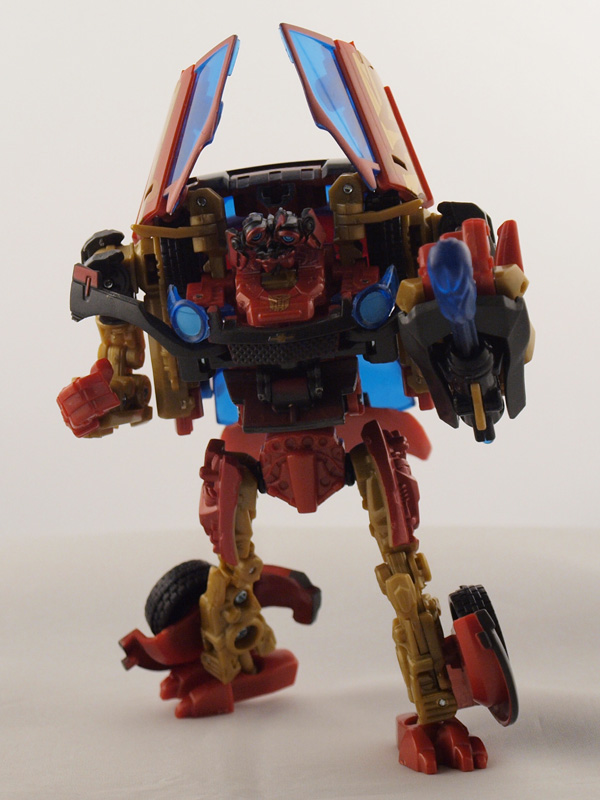 
Articulation is unchanged. That is to say, it's above par.

A little extra paint can improve a figure, as shown here.
Overall:

If you haven't bought the original, this is the Mudflap to get... unless you wait for the Human Alliance model.