Yep, more 2007 figures are coming with fancy new repaints. However, our review subject today gets more than paint add-ons. Recon Ironhide has been outfitted for almost any terrain.

Stalking through the jungles of Southeast Asia, Ironhide moves in absolute silence. The only sound is the dripping of the never ending rain from the broad leaves of immense trees. Yet he knows Decepticon Bludgeon is here somewhere, waiting for him. He has come to this verdant place to hunt the Decepticon martial artist and finish the job the other Autobots left undone. He has come to track and destroy a dangerous Decepticon warrior, once and for all. 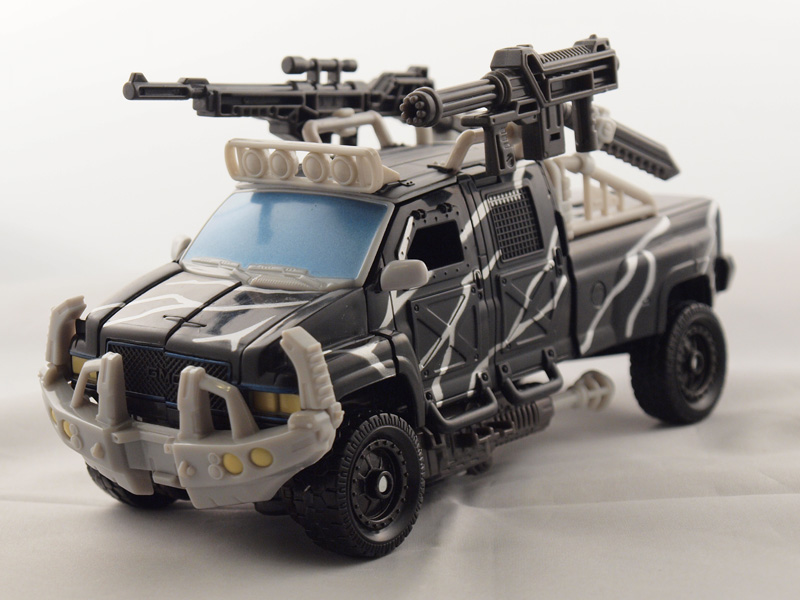 Ironhide's recon package adds alot of aftermarket goodies to his GMC Topkick alt mode. Included in the upgrade is a beefed up armored front bumper (complete with dual foglights), a roof mounted Hella lighting system, roof racks, and vertical bed rails. In case you thought he wasn't well armed before, he now also comes with 2 additional guns and two combat knives. These weapons attach to the bed rail when not in use. There are also changes to the mold itself. 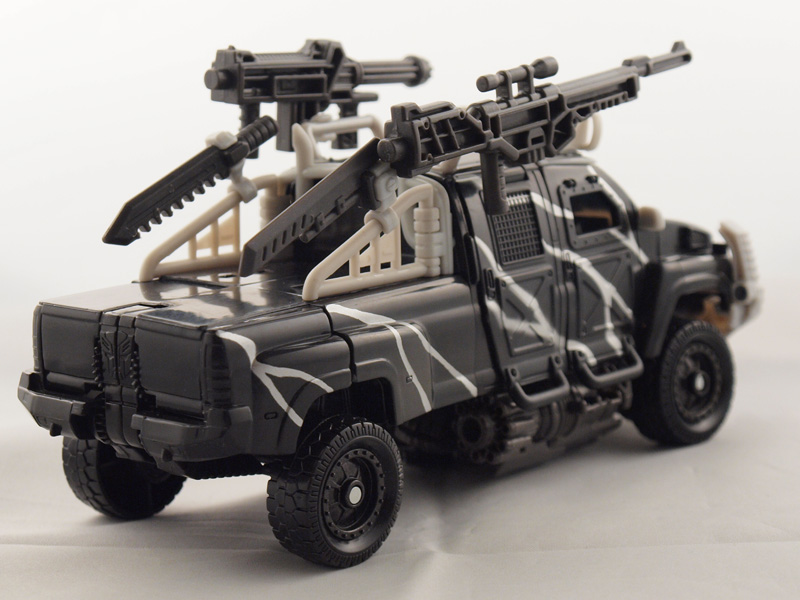 The doors are refortified with crossbars. The rear doors now have grated windows. For the final touch, he now has tubular step rails for entering the cabin. Yet for all these extra add-ons, the details were left sparse. He is almost entirely black sans the zebra like silver stripes. All the new add-ons are simple PVC gray. Much of the detail that the 2007 model had (painted tail lights, corner lamps, etc) is all but gone now. I suppose that's what's meant by a compromise. 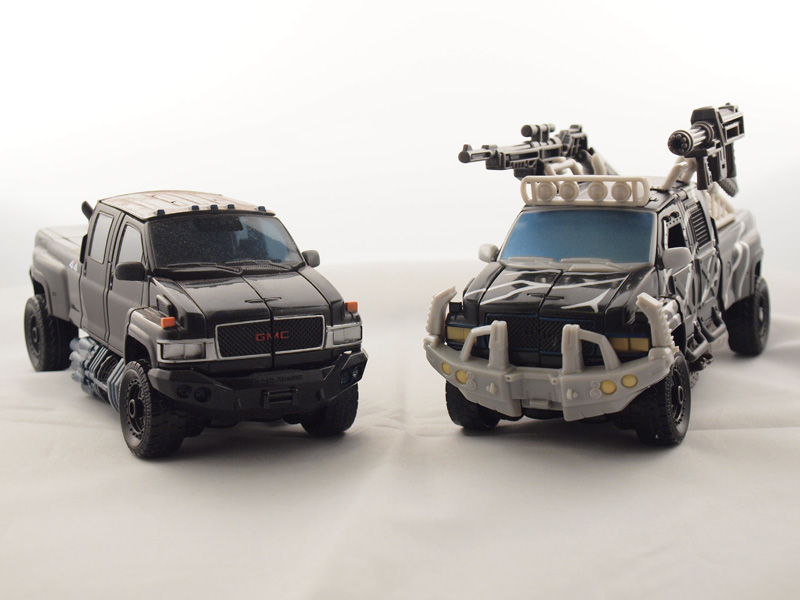 For the most part, Recon Ironhide shares the same transform sequence as the 2007 figure. There are 2 differences. Whereas the rear doors used to fold into the front doors in 2007, Recon's doors lift up like gullwings. The rear kibble also situates differently, rotating and laying against his back instead of simply tucking in. All other aspects of the transformation, including the automorph feature in his legs, remains intact. 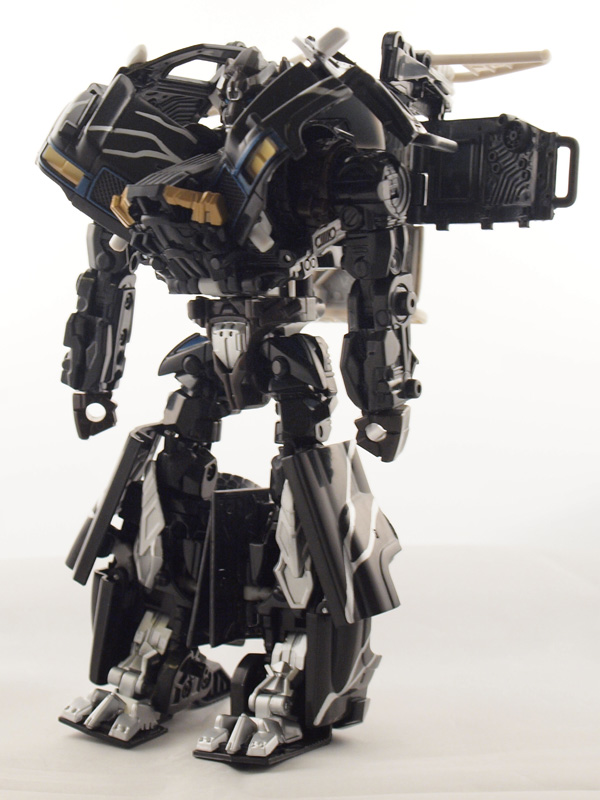 The core robot mode changes little from the 2007 model besides the paint scheme. Recon mostly makes do with black paint and silver apps. One area of improvement is with the head, which sports more paint detail this time around. 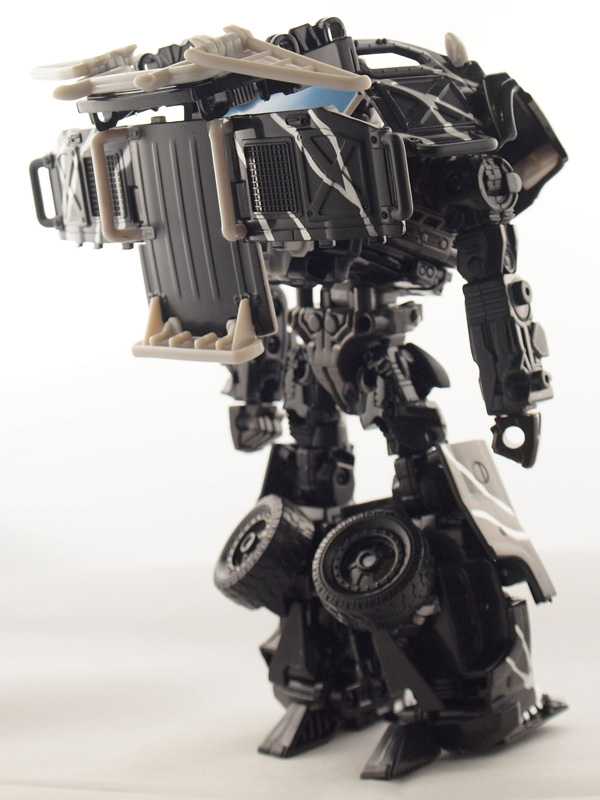 The big change with this version is the weaponry. The 2007 model had a battery of 4 launchable missiles along with a 4 barrel cannon. To start with, Recon Ironhide trades in for a gatling gun for his right arm but makes due with a single missile launcher for his left arm. 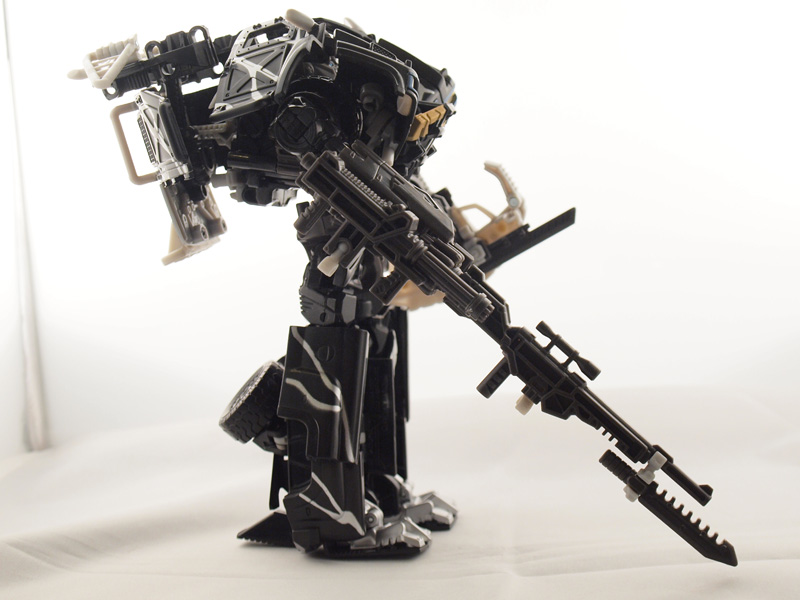 You can combine the serrated combat knife with the scoped rifle and outfit both onto the gatling gun, giving you one serious weapon. If that seems just a bit too crude, no worries. The serrated knife/rifle combo (or just the knife or rifle for that matter) can be wielded by itself in either hand. 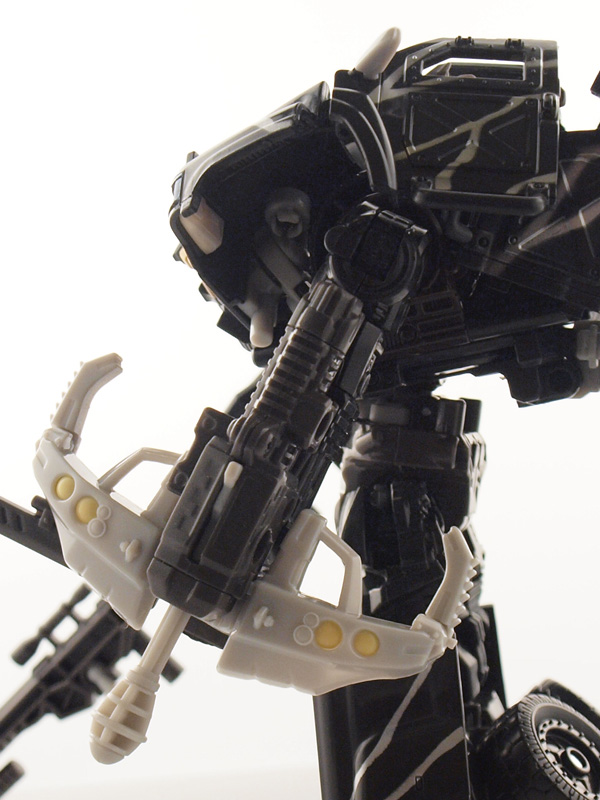 Combining the front bumper with the launcher will turn it into a crossbow. Even with the crossbow, you still have enough room to fit his other combat knife in his left hand. Talk about being prepared, he's ready for anything! 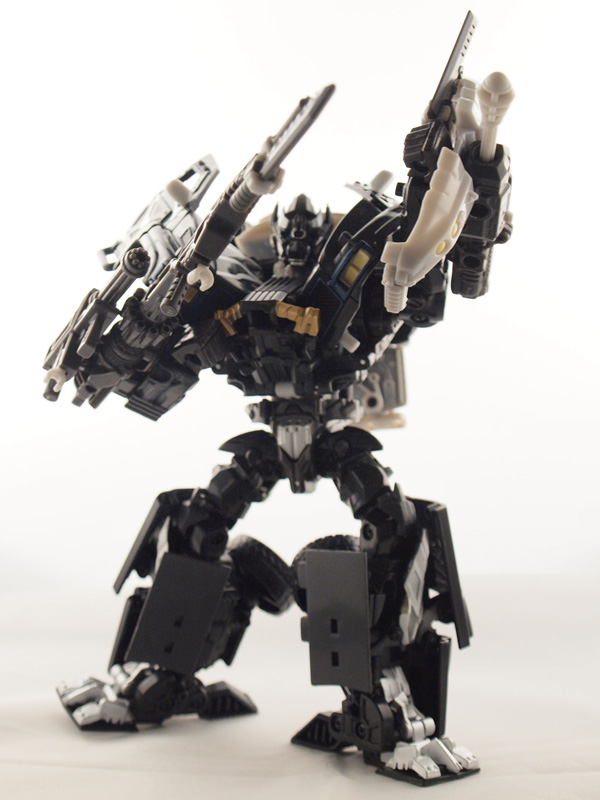 
A pretty solid poser, even without articulated feet.

Beefier than before, but the lack of paint apps makes it look like a prototype.
Robot Mode:

Armed to the teeth.
Overall:

With a little detailing, you'll forget he ever had a 2007 figure. As is though, a bit drab in the vehicle mode.