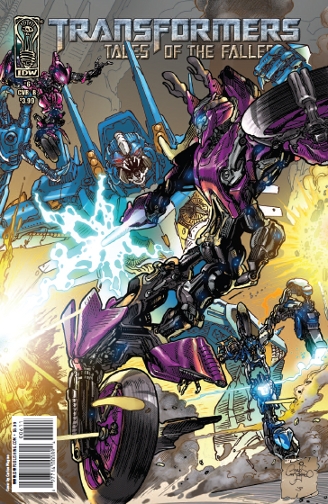 Arcee got short shrift in the latest installment of Michael Bay’s blockbuster, soon to be trilogy. Not only the first Movie-verse female transformer, she was an unexplained and complex visual, always accompanied by two other “fem-bots” who would be named only as toys. They dynamic of these three was never touched upon in the film. Indeed the only sentence of dialog Arcee was graced with was interrupted by a missile barrage to the face. Like so many new RotF characters it made one wonder why they’d added her at all.

Here, in Tales of the Fallen #6 the dynamic of the Triplet Feme-formers is fully explained, as well as “their” origin. Which is a pretty creepy one. It’s also linked to Skids and Mudflap, writer, Chris Mowry, ties their status as “twins” to the linked nature of the Autobot Motorcycles, whilst simultaneously explaining their… mental deficiency. Actually it works quite well and is probably the most sympathetic portrayal of the twins to date. 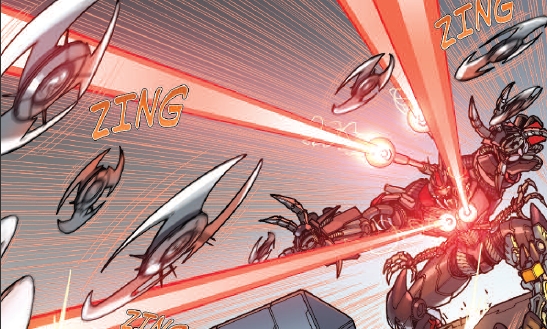 In addition, Mr. Mowry brings us a new original movie-verse character, Flatline, a character he describes as being akin to a “Decepticon Ratchet”. Here he seems a bit more like a Decepticon Dr. Megale. He’s so casually evil, in such a twisted way, you just can’t wait for him to get blasted. As a villain should be, well done Mr. Mowry!

This issue also manages to pack in a very respectable amount of compelling action, with enough turnaround to make you feel as if you’ve just read two comics, in a good way.

Alex Milne’s Movie-verse art needs no introduction. Oddly this issue seems to be a rung beneath it’s predecessor. It’s still at the far top end of movie/comic art, but Issue 5 was definitely superior.

However, as a note on both writing and art, I will say some of the imagery of Arcee’s alteration were somewhat disturbing. It seems that every time we encounter fembots in IDW they are bizarre unethical medical experiments or being forcibly disassembled. It may be time to tone the robo-fetish down. 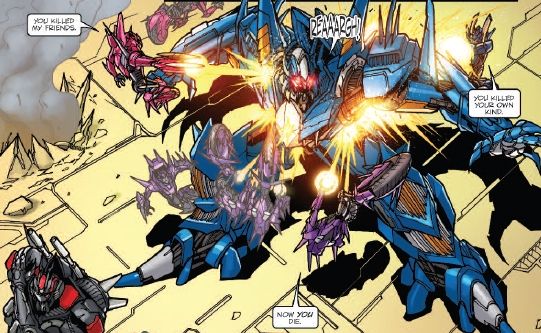 Overall, a fun, informative, action packed issue. Fans of the movie-verse and/or it’s rendition of Arcee should not be disappointed. Flatline works, and is worthy of a return performance.