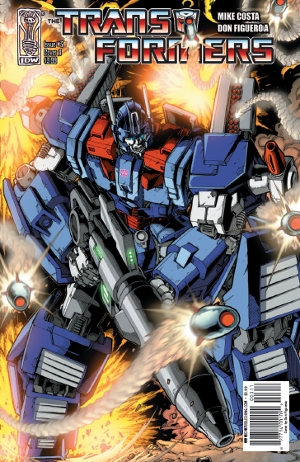 The word ongoing for a comic is both a blessing and a curse. Ongoing comics tell longer more intertwined stories, but in these early days of a new ongoing there is nothing to really overlap with. IDW made moves to compensate for this with the All Hail Megatron: Coda series, but it hasn’t saved them from the problem with issue 3, too much set up.

As opposed to the first issue, which arguably had way to much happen in it, Transformers #3 doesn’t have much happen in it at all. Ultra Magnus arrives and is… going to do something later. Hot Rod and Swindle have a plan to get off of earth involving Jetfire that… they’re going to tell us later. Prime and Spike were about to talk last issue, and they’re about to talk for most of this one as well. As for Bumblebee and Co., they’re next move is covered in Bumblebee #1.

The only real forward story movement here is the (annoyingly easy) capture of a few Autobots with an escape by Blurr (also to be explored in the Bumblebee series). Also Ultra Magnus’ role is somewhat clarified, though sadly not the reason for it.

Now all this is not to say this is a lackluster comic. The art is great, the denatured faces are really working out. The characterization is solid, and the dialog is fluid and fun.

This is my new favorite picture of Swindle.

Like last issue, Transformers #3 leaves the reader excited about what’s to come, but it feels like an extension of the close of #2. This is sort of Transformers #2.5

Overall there is nothing wrong with this issue, it’s a fun read. It just doesn’t move the story forward very much.