Since Barricade's release back in 2007, he's had but one repaint but several releases. It would have seemed unlikely that he would be included in the Human Alliance lineup, especially considering he was pretty much absent from the Revenge of the Fallen movie. Yet, here we are, and he once again has brought Frenzy along for the ride.

Barricade and Decepticon Frenzy have worked together for centuries. They are a perfect partnership, designed for one purpose - to hunt down and destroy whatever target Megatron assigns to them. Decepticon Frenzy has a hyperactive hunger for information, which he uses to guide the relentless pursuit at which Barricade specializes. 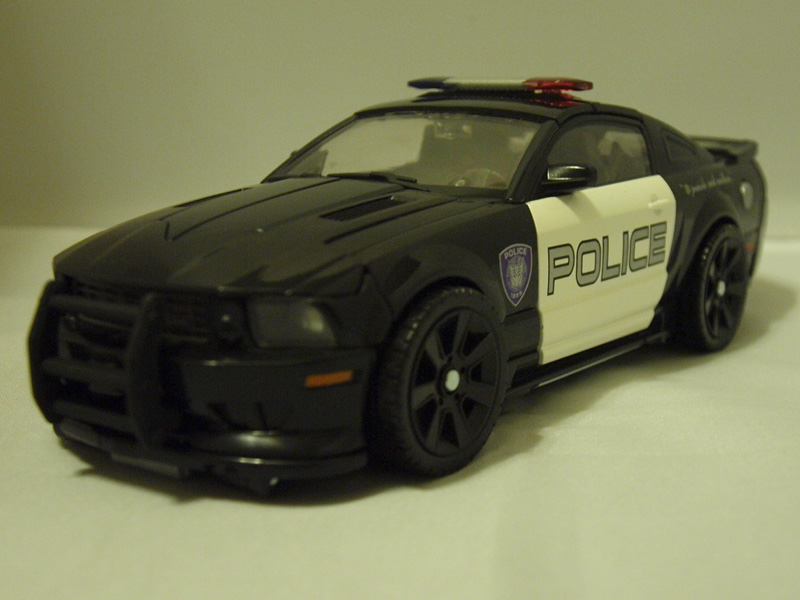 With previous Human Alliance releases, the alt modes were treated to a more detailed alt mode. However, with Barricade, detail upgrades have been kept to a minimum. The only real changes to be found are with the double barred bullbar on the front bumper, a painted rear corner light, a license plate "2PN-SLV", and his car ID on the rear bumper. He now also has clear back glass, but that also allows you to see his legs folded up. Not much of an improvement. 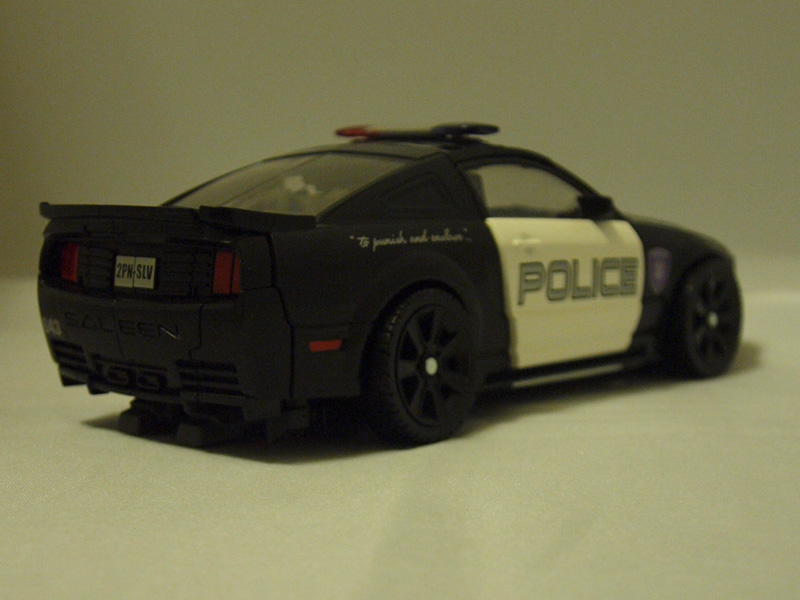 Two other oddities exist with this alt mode. First, the light bar. It's noticeably thinner on this version and comes off looking almost too small. Dare I say the Deluxe version has a nicer light bar. Also, the POLICE script on the rear air dam is facing the hood, instead of the rear as on the Deluxe figure. At least the interior has some detailing, which includes detailed door panels. One extra feature is that you can pull out cannons from under the front end. They only vaguely resemble the probes, but they do pack an arsenal punch. 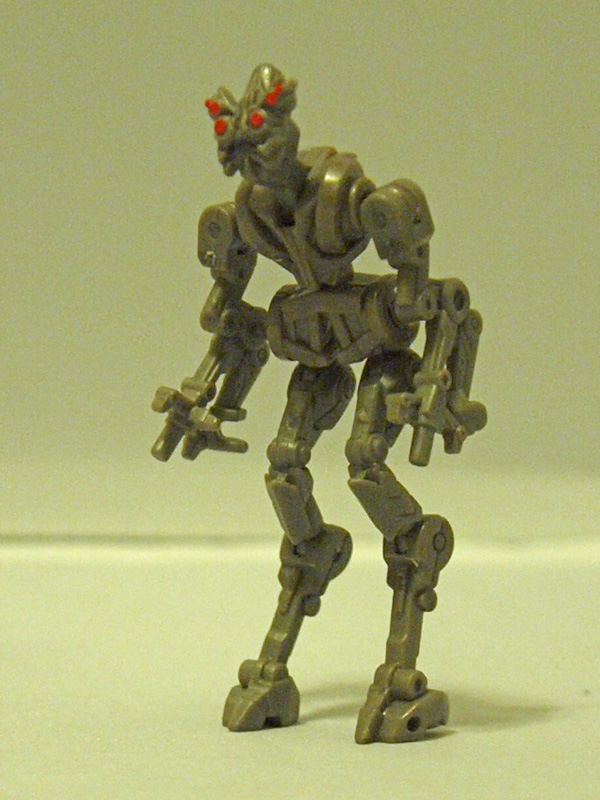 Barricade's partner is the featured pack in. As with the Deluxe version, he can be stored within Barricade's front end. Unlike the Deluxe, he can also ride as driver in the cockpit. Unlike the other HA pack-ins, Frenzy has a neck joint. Overall a very good semblance to his movie look.

His transformation is very similar to his Deluxe counterpart, with a few added details. Open both doors. Separate the sides from the vehicle and pull them out and forward. The back glass will separate along with the sides. Pull the roof away from the leg assembly. Fold the legs in a half moon pattern until they lock into a tab below the engine compartment. Unfold the legs and feet. Rotate the feet 180 degrees. The rear bumper corners also rotate forward to sit alongside the knees.

Fold down the seats. Twist the sides so that the rear end points to the ground. Fold out the right hand and collapse the back glass into the right forearm. Push the fuel filler cap on the left side to pop out the left hand. Collapse the back glass into the left forearm. Be sure to fold out the blades on his left hand. Rotate the headlights 90 degrees forward, then fold the fenders inward. Close the doors, then pull the shoulders up and inward. Fold down the bullbar, then push it in. Pull the roof out and downward. Lift up the head, then collapse the roof behind his head. Fold the two cowl halves forward to finish. 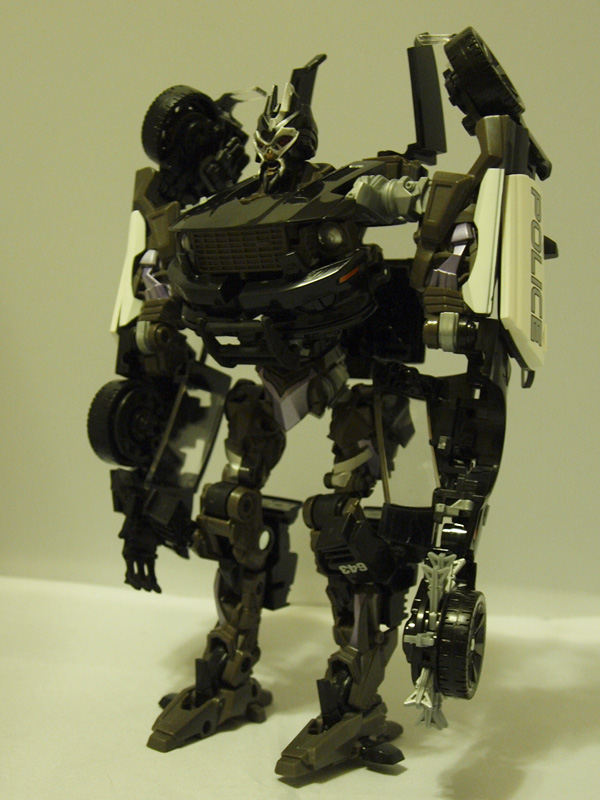 The robot mode is definitely where Barricade shines. Whereas details might not have improved much in the alt mode, the details in bot mode improve ten fold. The head in particular is a major upgrade, and includes both a movable jaw and magenta piping through the eyes. 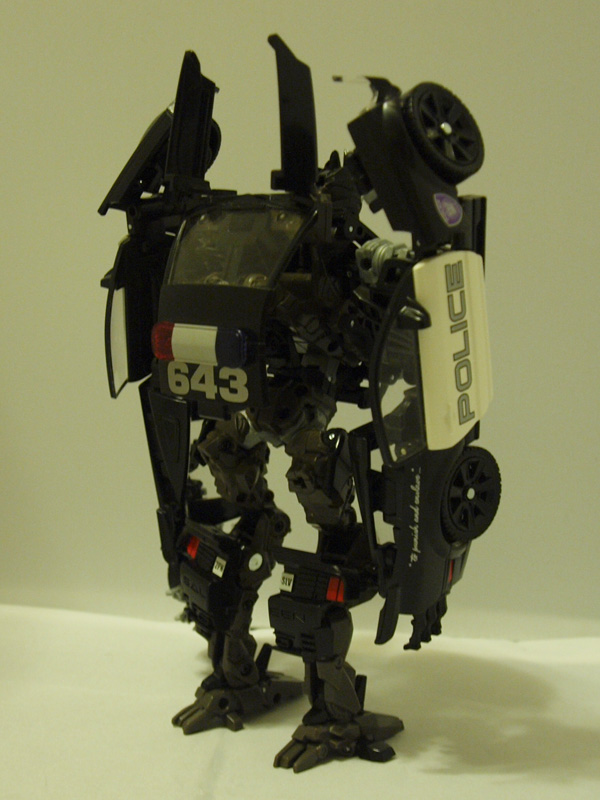 The left arm features his sawblade and is free spinning. The right hand features a jointed main knuckle line for the hand and a poseable thumb. Then, of course, there's is various interactions with Frenzy: 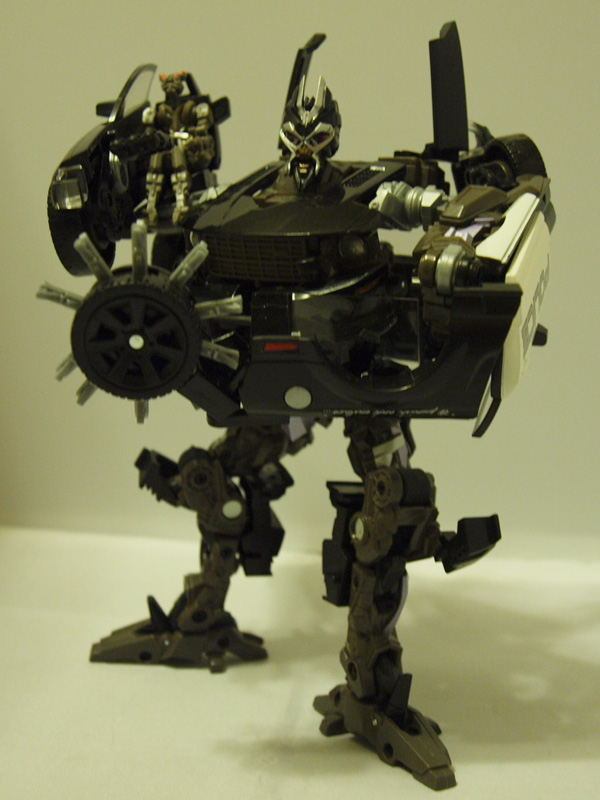 For his first trick, reposition the right headlight so it aligns with the side. Position the right arm as if you were going to convert back to alt mode. Fold up the right seat, then bend the forearm forward fully. There is a 3 barrel cannon folded up behind the headlight panel. Position it once you seat Frenzy in the chair. This might have worked better had the cannon been closer. 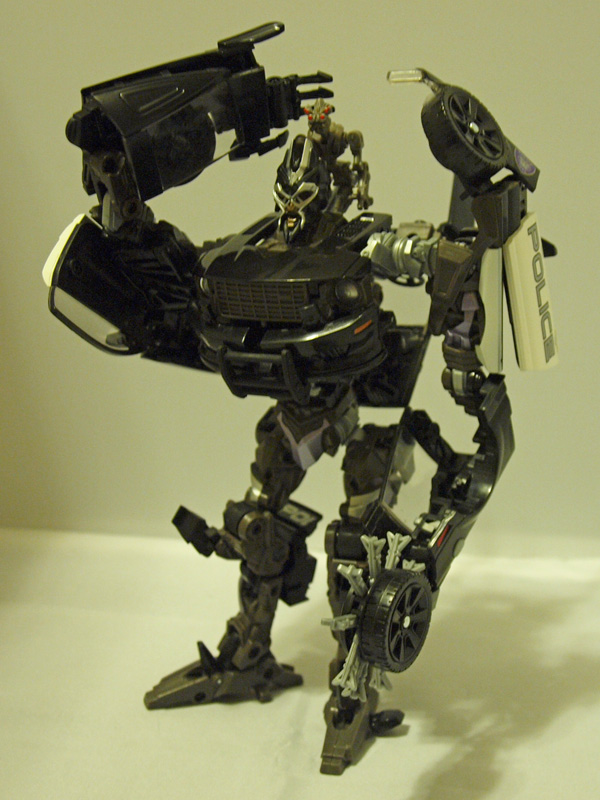 For his second trip, pull the roof back slightly then peg Frenzy's feet to the platform on his back. This serves no purpose besides having Frenzy perch behind Barricade's head. 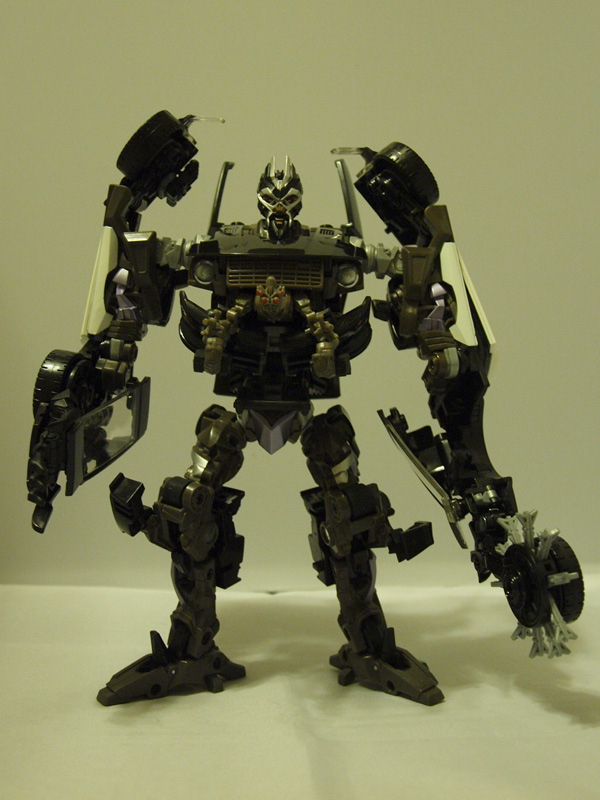 For the final trick, pull the bullbar completely down. Pull out the cannons hidden below his chest. Open the hood and fold in the grille. Fold back Frenzy's legs and insert him into the recess. Once in, position the lower bumper halves so that Frenzy can grip both cannons. This is perhaps the best use of the "human" figures yet in this series.


Lots of posing ability, but lacking in the legs a bit. You can cheat by rotating the calves 180 degrees. You will get the rear decklid exposed, but gain knee range.

Not alot of extra details added, but faithful enough to the original Deluxe model
Robot Mode:

Poseability suffers in the legs a bit, but the extra details make up for it.
Overall:

Not without it's quirks, but definitely a bigger and better Barricade.