Hasbro seems to be going deep in the bag of tricks to pull out classic names for their non-movie figures. Their latest grab: A G1 Decepticon Headmaster by the name of Mindwipe. Although he has no Nebulon partner this time, he does keep his power of hypnosis.

With the power to mesmerize other robots, Mindwipe might be a match even for Optimus Prime. The Matrix of Leadership renders the Autbot leader immune, but Mindwipe has a host of other robots totally under his control. He stays safely in the air, while Optimus Prime struggles against a horde of hypnotized minions. 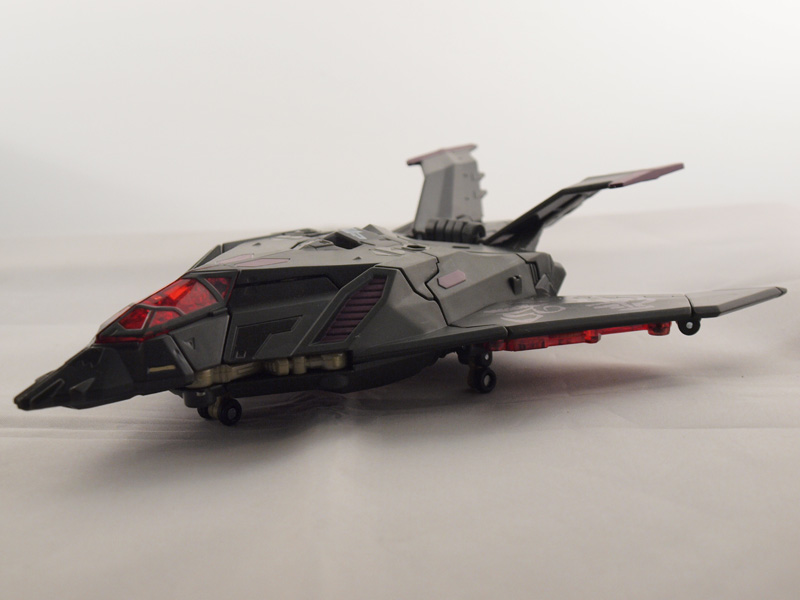 Mindwipe's alt for is that of a stealth fighter jet. It's a good fit that keeps somewhat in line with his bat mode from the G1 days. Color is a flat black, with purple accenting the intake vents and other various spots. The cockpit is a translucent red. There is a very small Decepticon symbol on the fuselage. You'll also note the Cybertronian writing on each of the wings. 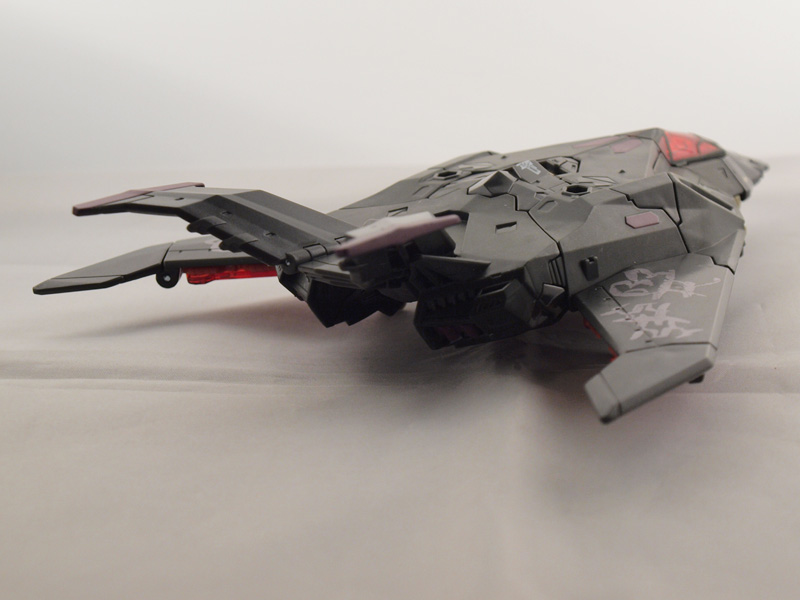 Mindwipe features 3pt landing gear that can be retracted. The front gear is under the nose, but be careful pulling it down as it's actually 2 halves. There is also a wheel under each wing where it connects to the fuselage. Although he's mostly very well done, turning him on his belly reveals a very unconcealed head. It does blend in, but I personally detest seeing robot heads in alt mode.

Mindwipe can be a bit of a tricky one. Begin by folding the wings down, while will let you tilt the fuselage down. Separate the nose and front assembly to form the legs. Rotate the waist 180 degrees. For your first trick, make sure the ball joints on his hips have the slot going to the groin. This will make sure his legs are positioned right. Pull the nose away from the front assembly to form the lower legs and feet.

Pull the cockpit assembly in half, away and back from the chest. Rotate the rear assembly back to form his back. Rotate the arms so they lay at his side. Rotate the forearms so that the cockpit faces back. Pull down on the arms to fully extend the elbows. Now comes trick #2. As you fold back the cockpit halves against his forearms, his fists will rotate out. To make sure the cockpits latch to their triggers, the hands must be FULLY out. This might take some slight force. If the cockpits won't lock in place... the fists are still recessed. Once you have that resolved, hinge down the chest plate and flip up the head to finish. 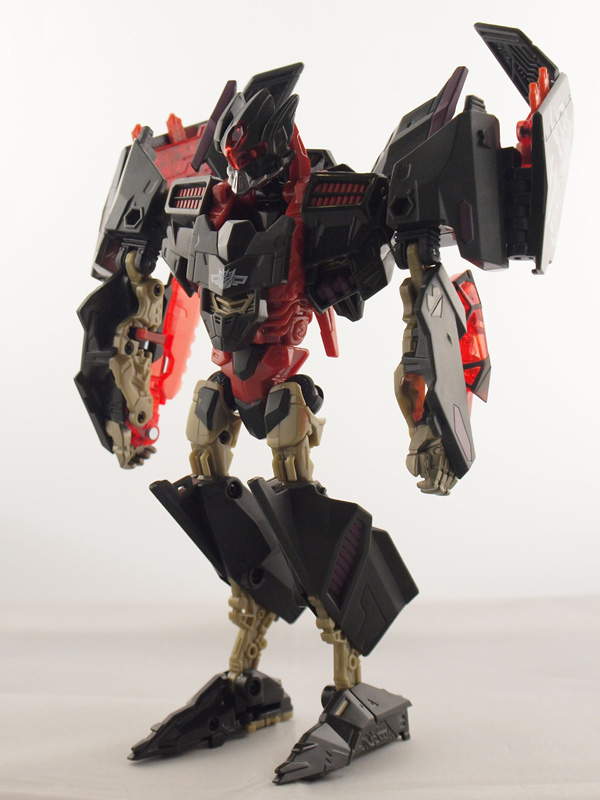 Any resemblence to the G1 counterpart in mode is purely coincidental here. The orange chest accents and pea green appendages give the figure some needed contrast. The head sculpt is well done, with eyes that look like they could pierce your soul. Makes you wonder how much more haunting they could look were they piped... which they're not. 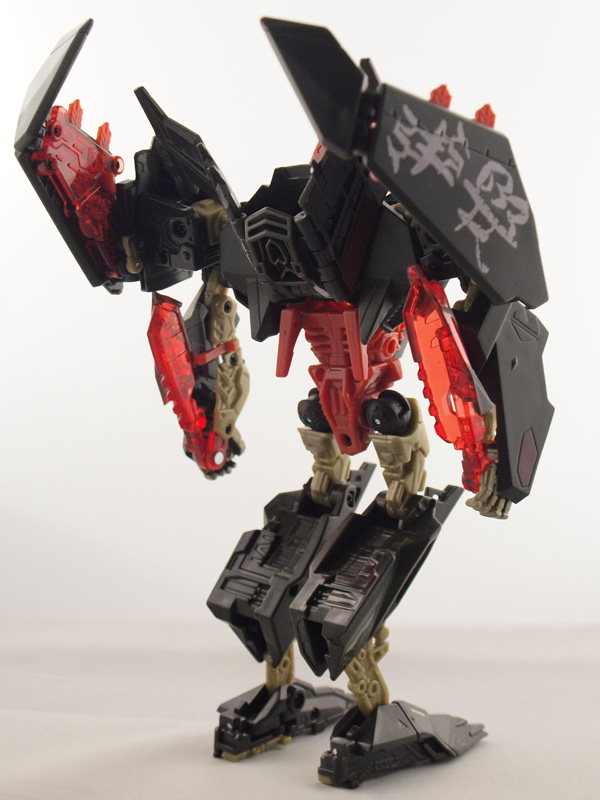 Mindwipe features two gimmicks. For this Mech Alive gimmick, folding the wings back exposes 'micro-blades'. It also folds the wingtips back slightly. Wow. The other feature is with this blades. Hitting a trigger underneath the inside of his elbow will flip out two serrated blades. This is, assuming, the blades (cockpit halves) were properly locked into place. This is a feature that works much better. The only major disappointment sans the Mech Alive feature? The recess in his chest where his head was tucked in. They could have thrown in a false plate at least. 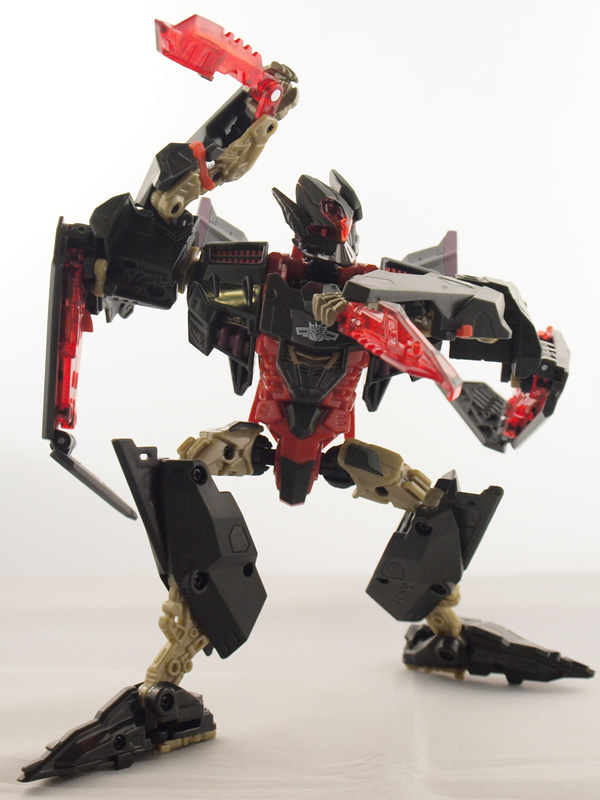 
Articulation is among the best of the line. As a plus, the joints are very tight, furthering the possibilities.

One little false plate kept him from being perfect. Those are the breaks.