Some bots never got the love they deserved. Take Brawn for example. He was a popular character in the G1 TV series, but his minibot figure was pretty subpar. Ever since, Brawn has been largely AWOL (unless you count X-Brawn from RiD or the Legends figure from Universe 2.0, some people don't count Legends). Now, after 26yrs, Brawn resurfaces to be part of the movie lineup.

There's nothing Brawn loves more than a challenge. Luckily, working with the N.E.S.T. global alliance gives him plenty of opportunities to show his strength. He has a new assignment: Track down the Decepticon strong bot Rampage. The Decepticon warrior's strength is legendary, but Brawn intends to crush both him and his legend with a couple blows of his indestructible fists. 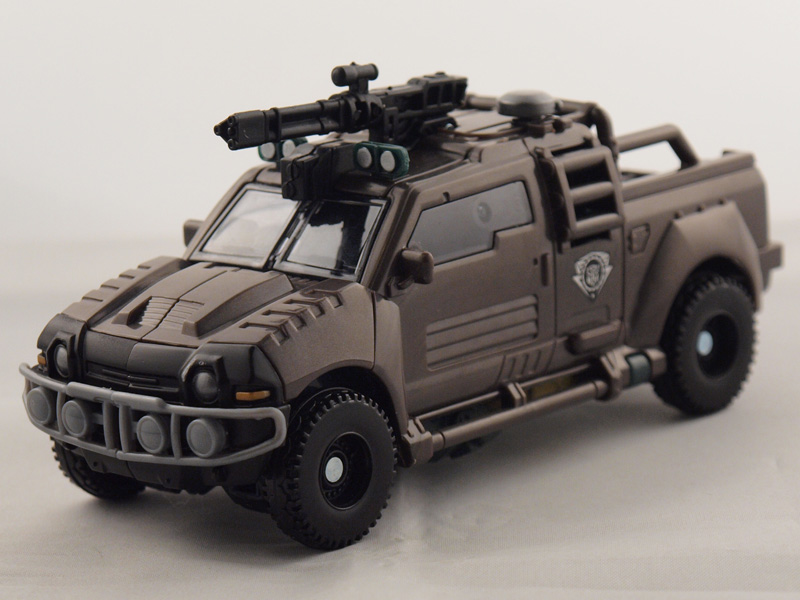 Brawn's alt form is best described as a Sport Utility Truck. He is a bronze color almost throughout. However, there's plenty of details to be spotted. He has a brushbar mounted to the front bumper equipped with foglights. He sports a satellite receiver on the roof, as well as rooflights. The rear windows are guarded by steel bars. He also features a tubular floorboard and rear bed rack. 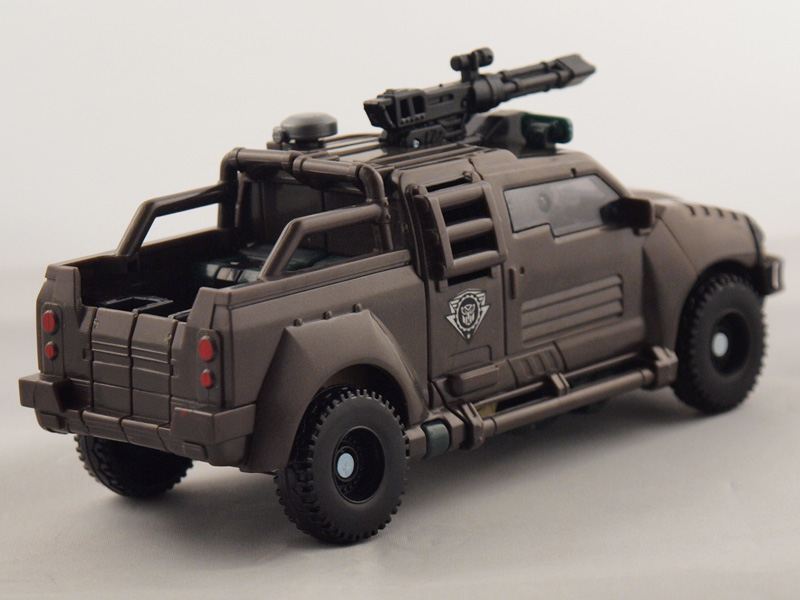 You don't need to look twice to guess he's armored to the hilt. He also has some firepower to match the armor, in the form of a roof mounted cannon. The cannon features a sight and can tilt up to 75 degrees to snipe airborne targets. Sadly, it's not rotatable. With some minor paint application, this figure could be a knockout.

Begin by pulling the doors away in a gullwing fashion. Peel the sides of the truck bed down. Peel the roof up and rearward so it hovers over the rear end. Pull down the tailgate, then flip the bed out a full 180 degrees to extend the arms. Split the front end in half. Each half of the hood will flip around to conceal the front wheels. Pull out the lower legs from under the front end and flip them out a full 180 degrees.

Rotate the front grille halves so that the corner light is pointing towards the hips. Rotate the waist 180 degrees. Pull out the feet, remembering to flip out his heels. Fold down the roof so that it lays flat against the arms. Finish folding back the bed sides, then separate the arms. Pull the arms down and away to form his shoulders. Rotate the arms to fall at his side. The roof gun can be positioned one of three ways once you rotate the base. You can either fold it flat against his back, or position it to flank either shoulder. 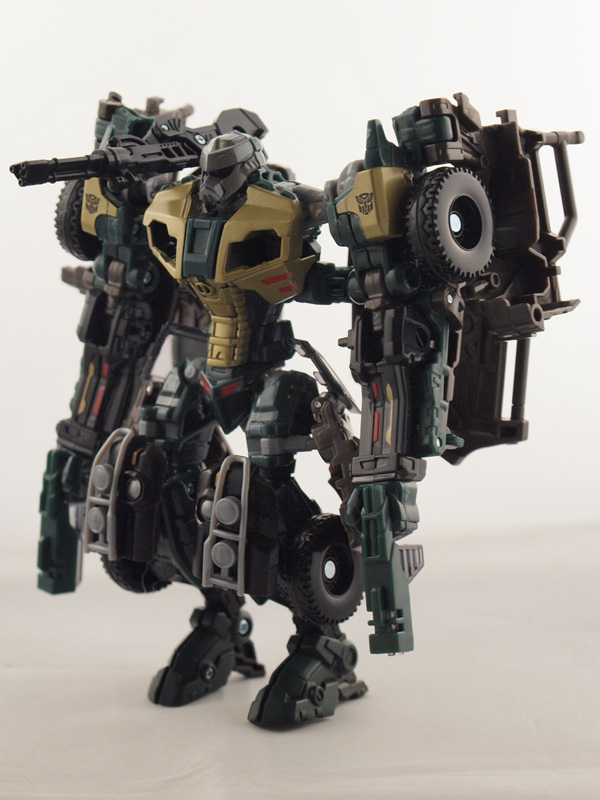 Brawn is definitely ready for some action in robot mode. He also sports his more traditional colors, letting some gold and green show through. Autobot insignia are displayed on either shoulder. The head sculpt is rather bland and looks smallish compared to his body. The eyes are piped clear, but due to where the window is the piping doesn't show up very well. 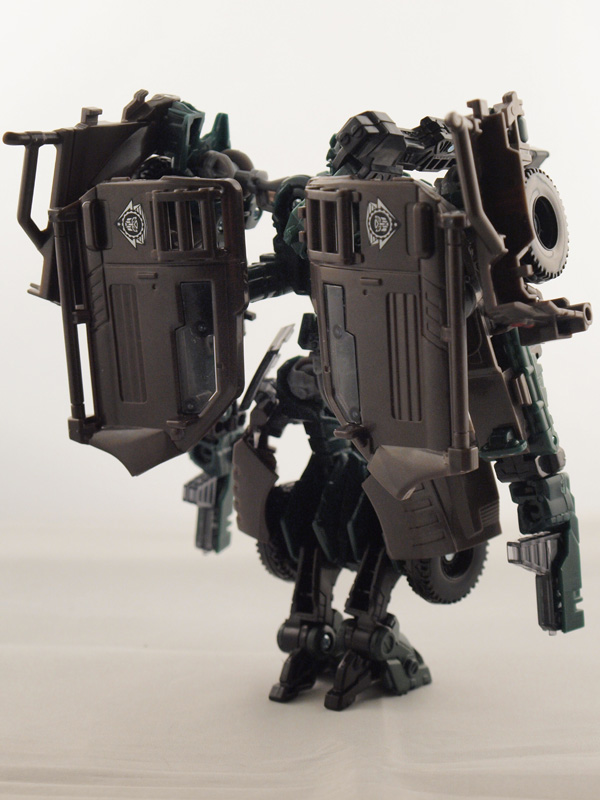 As if the shoulder mountable cannon and the indestructible fists weren't enough, Brawn also packs a pair of pistols. These pistols are removable should you choose to stuff something else in his fist. One feature not noted on the packaging is a Mech Alive feature. He has 'thrusters' built into his chests. Spreading out his arms spins the thrusters.

Thanks to a question asked in the forum by member Datastream, I was made aware of a bonus. If you own Recon Ironhide, you can attach his arsenal to Brawn's rails in alt mode. You can also utilize said arsenal in bot mode, effectively making him a one man destruction crew. 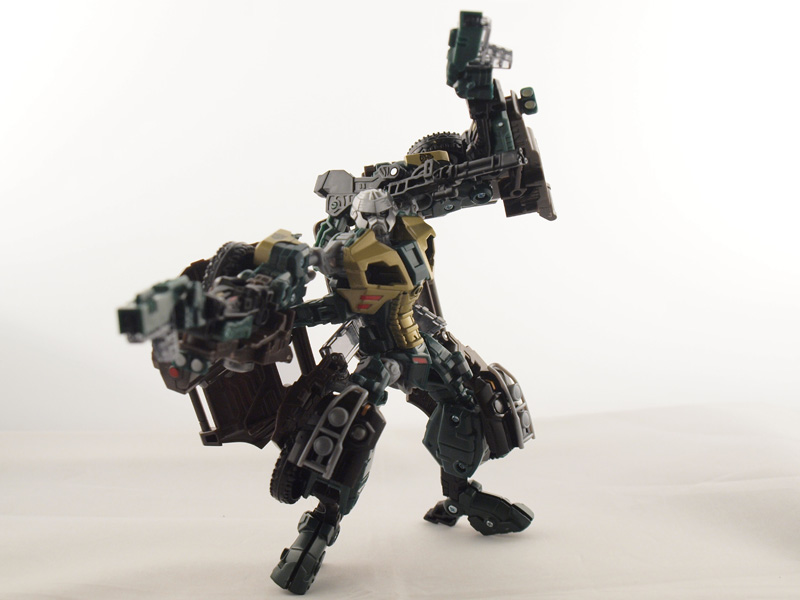 
Kibble, although moderately excessive, doesn't interfere with articulation. The head is limited due to the design of the chest. The biggest problem are the hip joints, which tend to pop off.

Brawn gets alot of redemption