Ratchet has been revisited a couple of times since his 2007 premiere. Now, it's time for some downsizing as Ratchet gets the Deluxe class treatment to be on more of a playing field against Lockdown. 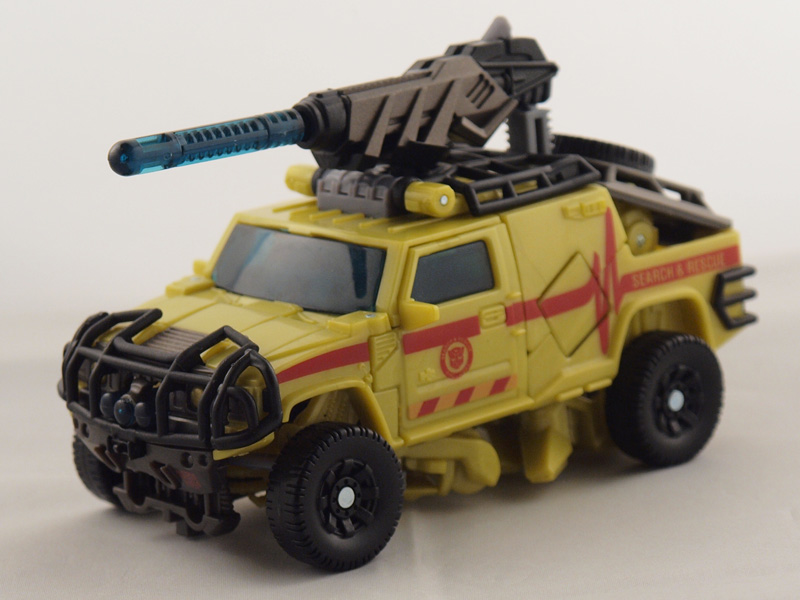 Although miniaturized, Ratchet still keeps his H2 alt mode... albeit altered. He is now an SUT,complete with a Baja style bedrail package. To show he's taking Lockdown's threat seriously, he's also armed himself with a roof mounted cannon. This cannon, by the way, is armed with a launchable missile. 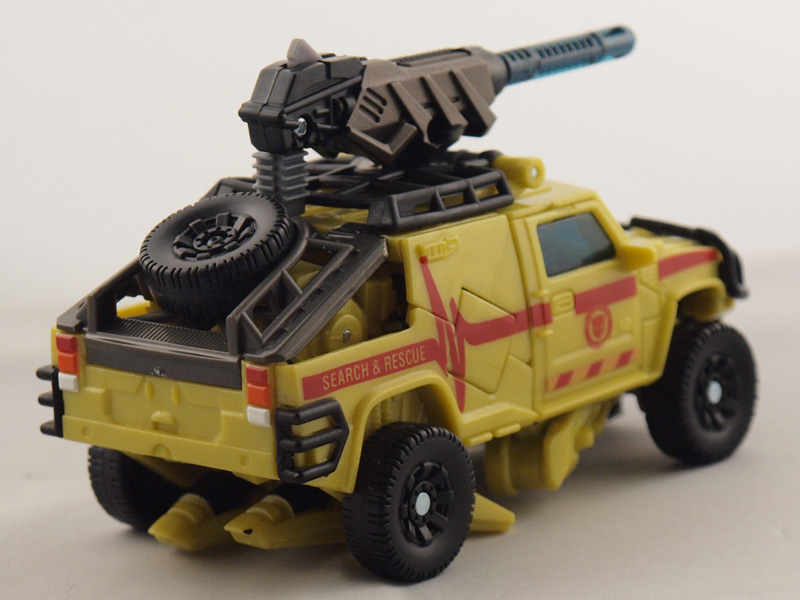 For the most part, it would seem the smaller scale mold didn't affect Ratchet much. That is, until, you look at the undercarriage. The robot mode appendages not only are solely visible, but do nothing for ground clearance. With no ground clearance, it makes for no rolling action which tends to ruin the fun of the alt mode.

Transformation can be a bit tricky... and dangerous. Remove the roof mounted cannon. Pull down the legs, then pull the doors out and away. Pull the rear quarterpanels from the rear end. Fold up the tailgate, then collapse the panels forward against the roof. Spin the legs just above the knees a full 180 degrees, then pull them down. Spread the outer rear haunch for stabilization.

Now comes the dangerous part. When folding the rear quarterpanels in, realize that they are EXTREMELY weak and will stress easily. They're also trick to get bent. Here's how to do it without damage. First, fold the wheel portion back, making sure to catch the top hinge in the process. Now, fold the bottom hinge forward 90 degrees to make a Z pattern. Now, fold the wheel forward completely. Take great care in this, as it will fight you if not done perfectly. 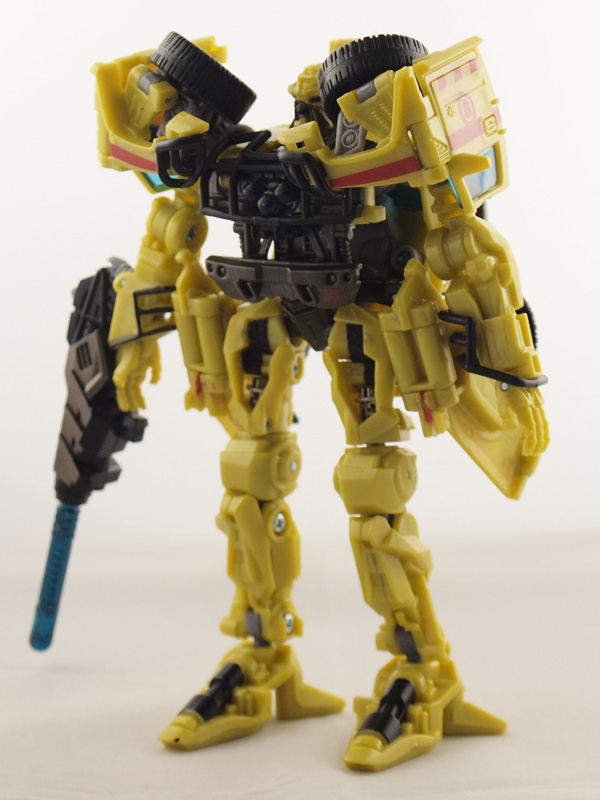 Ratchet has slimmed down a bit versus his Voyager version. He's also seem to pick up some more 'realistic' limbs. The head sculpt is faithful and features blue piping. Unfortunately, the window is blocked by a tab so it's almost impossible to use the effect. 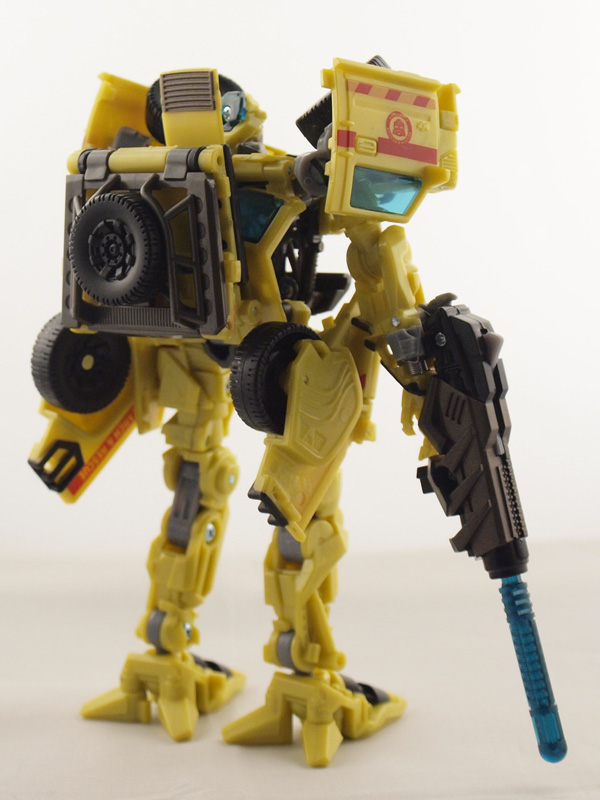 So you might wonder what to do with that roof mounted cannon. The answer is that it slides into place via a slot on his right forearm. The socket is spring loaded, which means that the gun can pop off at a second's notice. It's a cool effect, but the mechanism is so hair triggered that it usually pops off without prompting. It can also be a pain to lock in place. Finally, a mech alive feature. Spinning the legs will simulate gear spinning in his thighs. Notihng to get excited about, but it's there. 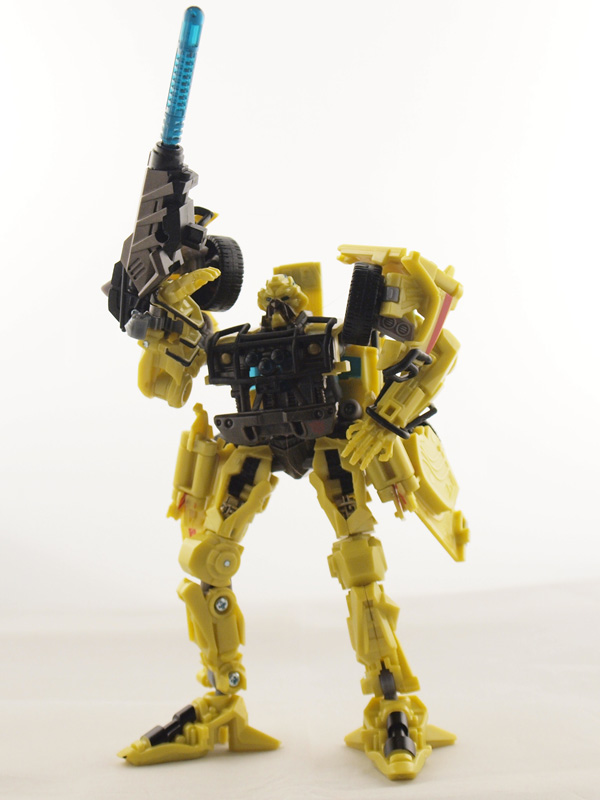 
The joints are there, but not the range. It's not so much the kibble, but the bulk of the hips that limit motion.

With all the deluxes out there to have right now, this is a back burner figure. Solely for completists