throughout the lifespan of Animated on TV, viewers were teased by seeing some Cybertronian alt modes of certain characters. However, apart from the leaders and LongArm (cough, Shockwave), none of those alt modes made it to the toy line. With the encore of Animated rolling out, Toys R Us is leading the way with Ratchet, who is the first non-leader figure to sport his pre-Earth alternate mode.

"You call that a dent? Get back out there soldier!"

Back when the war was at its worst, even the Autobots that weren't programmed to fight were called into battle. More than once, Autobot Ratchet was forced out into the battlefield not just as a medic, but as a warrior. They're not memories he likes to recall, but he has learned more than one lesson that has saved his life in the years since.

Injured Autobots often request him as their medic

Specializes in modifying armor and weapons to peak condition

When forced to fight, usually shoots to disable, instead of destroy 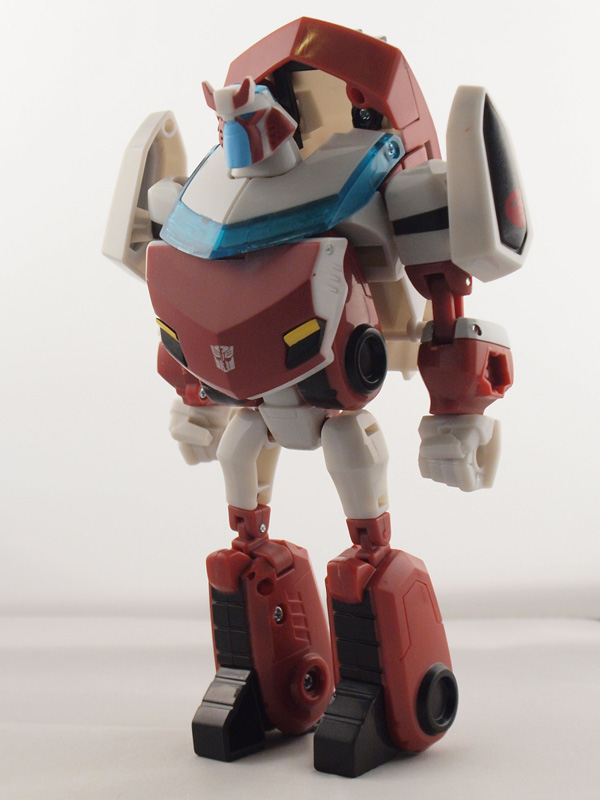 Ratchet has his same familiar scheme as he did in his Earth mode, but it actually looks cleaner in Cybertronian guise. Maybe because the medic panels on his shoulders look more natural this time around. In any case, the figure is largely accurate to the TV depiction. The head scuplt is a younger, happier version of Ratchet, including both his horns being intact. There is blue piping for the eyes. 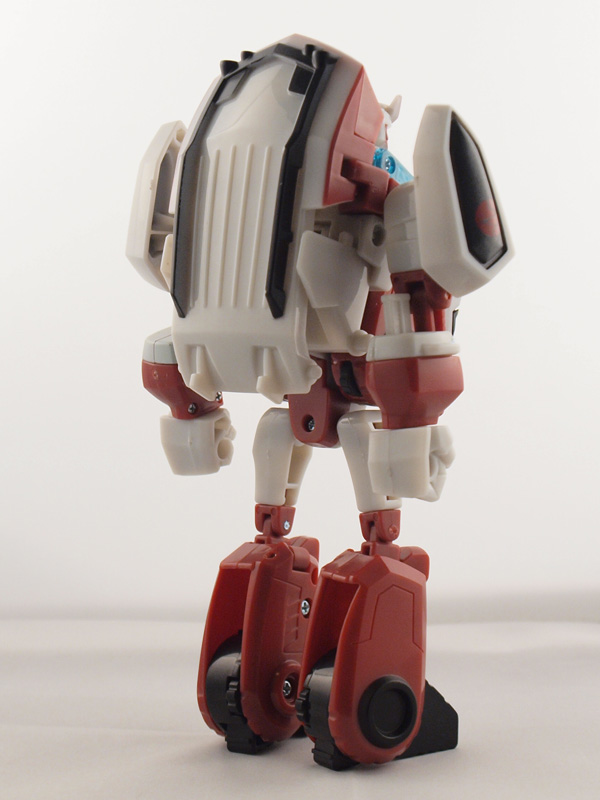 Although he has no tools or magnet claws in this earlier form, he still comes prepared via a pair of shock panels. These clip on around his fists. For an added punch (no pun intended, really), his right forearm is spring loaded. Press the stalk behind his elbow and his arm will extend for punching action. 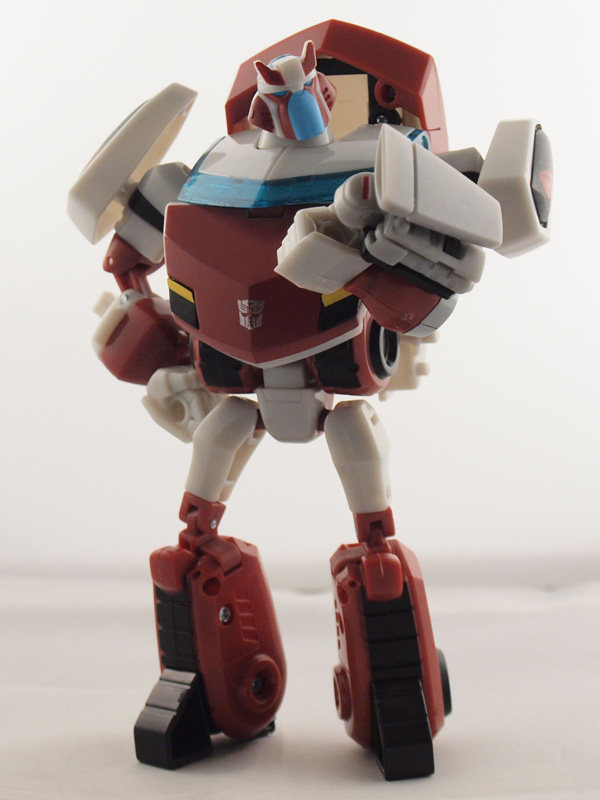 Oh, and in case you didn't notice, his bracket remains on the left forearm for his EMP generator. You still have to hunt down Lockdown to get it back, though. 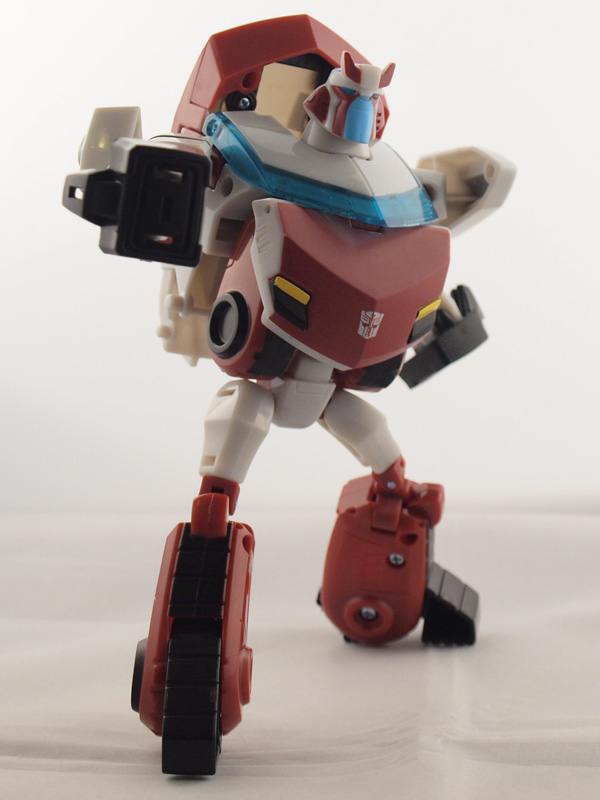 
Posing is near perfect on this figure. The only suffering point, at least with the one I have, is loose elbow joints.

Begin the process by pushing his head back into the roof. Pull back on the arms to release them from the torso area. Rotate his shoulder shields 180 degrees. Fold up both arms 180 degrees. Flip up the back to cover the head. This next part can be a tad tricky. While keeping the shoulder shields in the relatively same place, flip the arms under the roof. The shields will peg to the roof once done right. 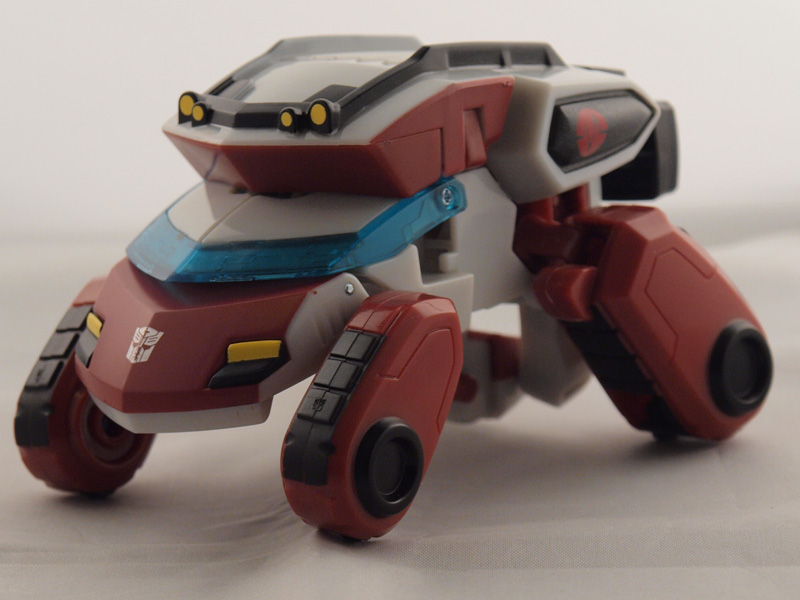 You have to give the design credit, it certainly looks other-worldly. The alt mode's tread design is similar to LongArm's crane mode. There are 4 molded wheels for motoring along. He also sports a rail on the roof housing 4 spotlights. 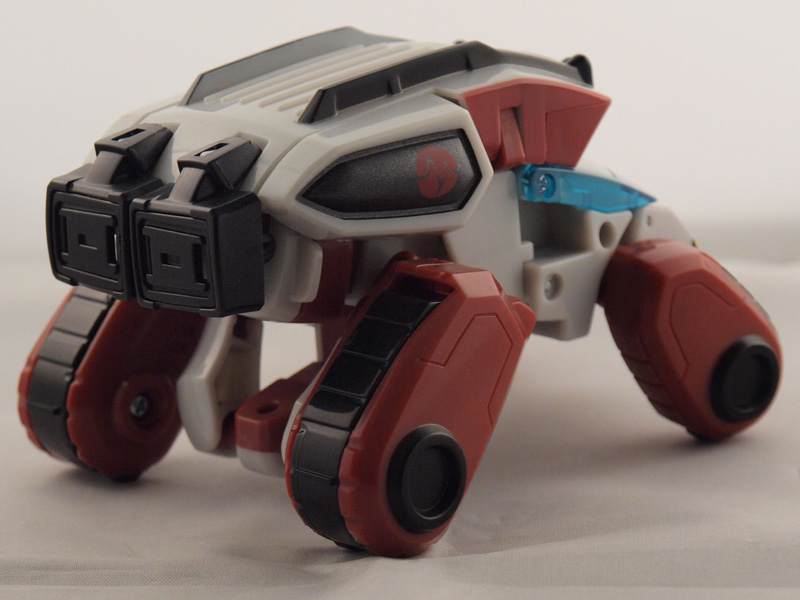 It might be me, but every time I stare at this alt mode I get mental picture of a metallic turtle with the belly carved out. Looking at any angle besides the front, you get a feeling that this alt form is incomplete or clumsy. There's a lot of robot kibble exposed and gaps in the hinging. Granted, this alt mode is a hard one to pull off, but it could have been executed better.

- Worth it for the robot mode. The alt mode will either perplex you or make you keep it in robot mode.