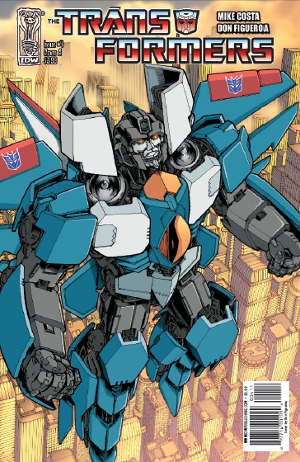 Now this is more like it. After the jolt of #1, and breath catching follow ups,Transformers #4 has finally succeeded in making the ongoing series feel like home. With the small but substantial change to the faces no longer a novelty and an integrated cast of regulars, the ongoing is finally about something.

Writer Mike Costa has successfully leveraged his mixed bag cast to give the reader a reason to be interested in just about every one in the book. Seemingly having passed through the “look what’s changed in three years” phase of the story, #4 much more than its predecessors seems free and able to settle into the rest of established continuity.

Character is king in this issue, which opens with a lengthy flashback of Thundercracker’s post “All Hail Megatron” travails, is filled with great interaction particularly between Swindle, and “Rodimus Prime”, and moves on to what last issue promised, Ultra Magnus’ confrontation of the mixed faction team. Swindle’s dialog is gold, and filled with sarcastic foreshadowing and the expanded exploration of Thundercracker is great, though it gets a little smarmy at the end.

Prowl, the source of some fan angst in the first issue, pipes up in a substantial way for the first time since that issue. His portrayal should be reassuring to fans of his All Hail Megatron #15 performance that the Prowl from that issue is not gone. Though we won’t really know what Prowl’s deal is until his upcoming Spotlight.

After a bumpy start, Don Figuroa’s new G1 is really coming into its own. Images of intricate and consistent mid-transformation are particularly striking. Not much chance for Figuroa to show off his action skills in #4, but the faces are even more expressive than last, in particular they eyes seem to be able to convey more with each passing issue.

The ongoing is growing up, these pages are filled with story and character. Things are going somewhere, the “it’s not a reboot” phase is over. Maybe it’s just because #4 contains no Optimus feeling sorry for himself, but the whole issue feels more mature in a way. Everyone and everything has purpose. If this kind of tone and focus can be maintained there is a lot to look forward to in the Transformers ongoing.