With a few notable exceptions, there hasn't been very much minion action in the TF universe. That is to say, there hasn't been smaller robots teaming up and interacting with larger robots like Targetmasters (sans Universe Cyclonus) or Headmasters. Though this trend will reverse with the upcoming Power Core Combiners line, Hasbro does offer us another exception with the introduction of Skystalker.

Skystalker is more than happy to let Divebomb, in his new form, take fire from Scattorshot. While his partner is busy getting his wings singed, Skystalker is swooping in from behind in stealth mode, preparing to snatch the hapless Autobot and carry him off into the sky. 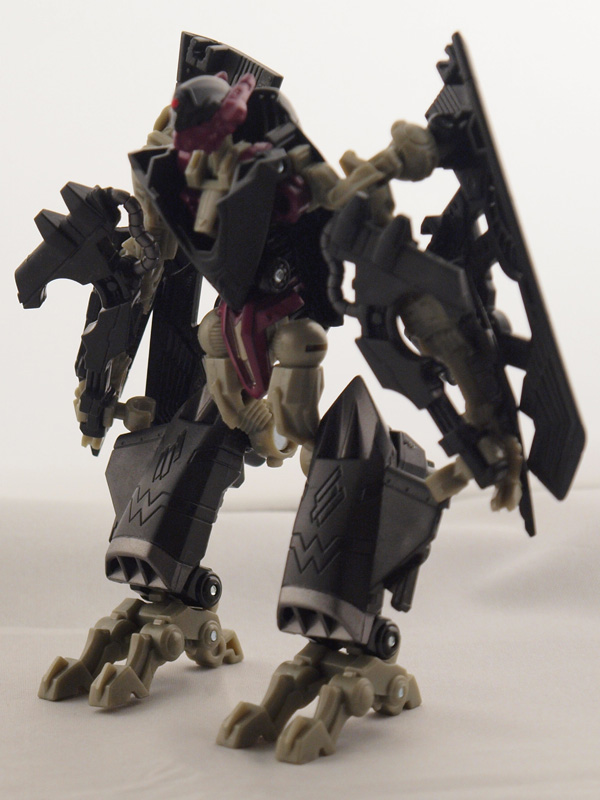 Skystalker has the minion look down pact. He is mostly black, with silver limbs and a magenta waist/chest area. The head sculpt is especially creepy, with a single optic and antennae that give him a batlike appearance. Though the instructions leave the wings resting behind his arms, they can be positioned any way you like, adding to the aesthetic. 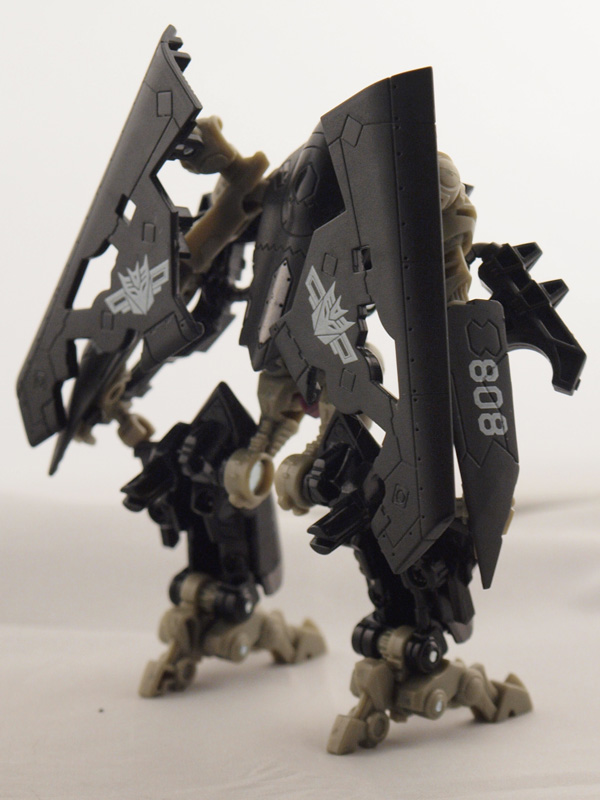 Skystalker is one of the few Scouts that sports detachable weaponry. In this case, he wields a pair of hooks that attach to each hand. The hooks are wired, which could mean their ability to be energized. With the way this figure is designed, the robot mode leaves the interpretation up to the imagination, which makes this figure so unique. 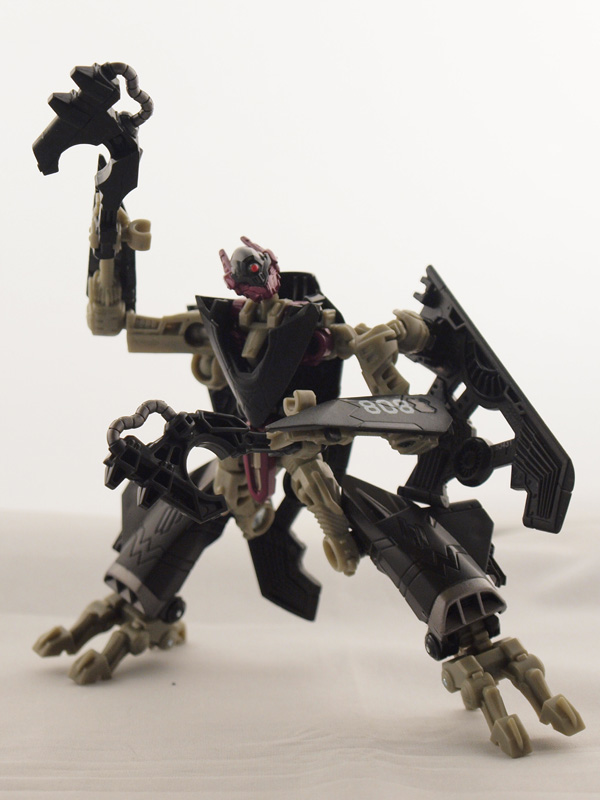 
The spring loaded feet don't interfere with standing. As far as the rest of the joints, you simply couldn't ask for better articulation from such a small figure.

Remove the hooks. Push down on the shoulders and fold the arms to the back. Line up the panels so the black 808 panels snap together seamlessly against his back. Push in the wings so that the pegs on the sides of his chest slide into grooves at the base of the wings. Push the head backwards into the back, then lift up the chest and rotate it back to conceal the head. This initially might take some force. The hooks snap into the gaps in the wings. Stop here for a second. 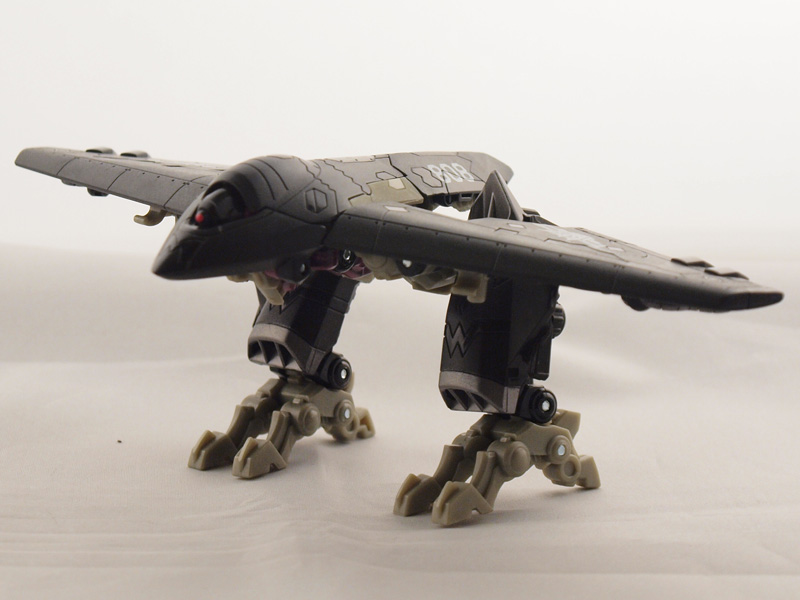 Skystalker can stop mid-transformation to form a gerwalk, or batlle, mode. In this sense, he can swoop down and carry off prey, such as suggested in his bio. The feet support the plane well while in this mode and the legs are fully poseable. To cpmplete transformation to alt mode, fold the feet behind the legs. Rotate the legs 180 degrees, then bend the hips back 90 degrees. Snap the lower legs against the body of the plane. 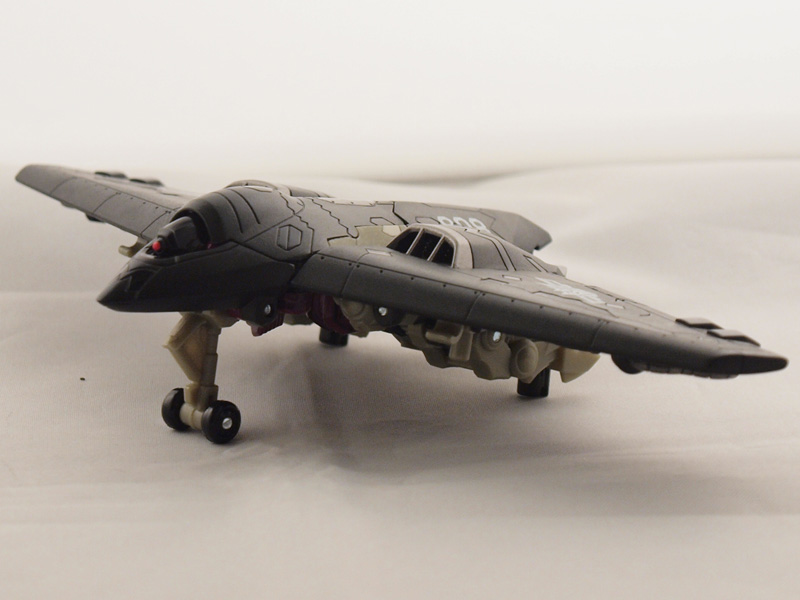 Once fully transformed, Skystalker forms a stealth fighter jet, though he bears closer resemblence to a drone aircraft due to the lack of a cockpit. The jet is matte black with silver intakes. "808" is found on either side of the tail section and winged Decepticon insignias grace each wing. Skystalker does sport a retractable nose wheel, although technically he has no rear landing gear 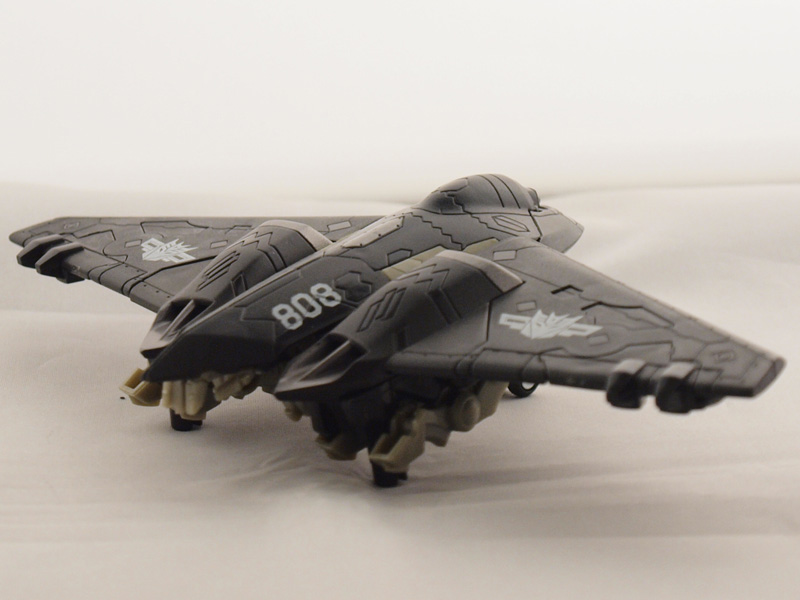 Skystalker has a bonus not mentioned in the instructions. He has two rearward pegs that fit into two holes located on Mindwipe's fuselage. Therefore, Skystalker can dock onto Mindwipe. The two naturally look like they belong together, whether docked in alt mode or in robot mode. If you have Mindwipe, getting Skystalker as a partner for him is a simple no brainer. Even if you've shied from the Scouts up until this point... don't pass this one up. 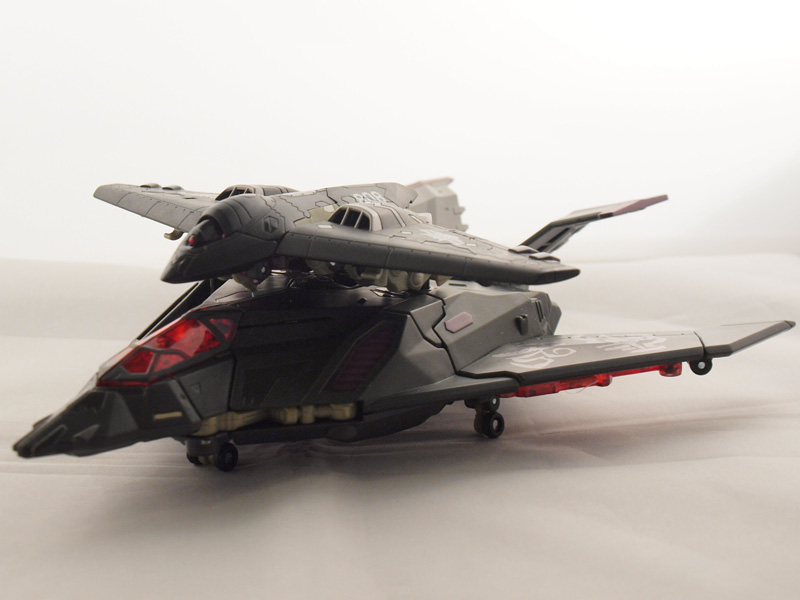 The best a Scout can get.
Robot Mode:

An absolute gem in the lineup