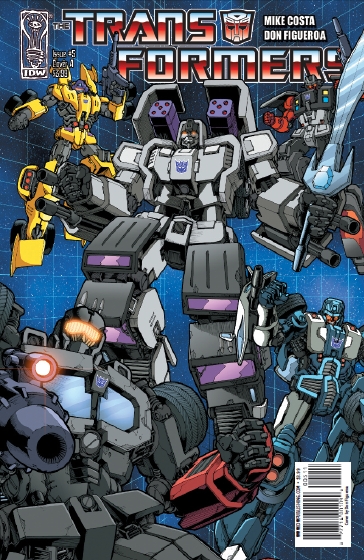 Has it been 5 issues already?

It’s hard to tell what to make of the Transformers ongoing series thus far. Leaping out of the gate at break neck speed, killing major characters, reformatting the setting, and force feeding us the previously unsupported notion that the Cybertronian civil war had been over for some time, Transformers #1 was to be the new “jumping on point” for readers.

It’s follow up efforts have however generally not kept up this pace. Last month, Transformers #4 rewarded stalwart readers with the best effort of the series so far, a character piece. Transformers #5 only partially capitalizes on that character work, and then just has time to work in a good cliffhanger. Sadly the issue suffers from an ailment that afflicted issues 2-3, the Bumblebee Mini-series.

This unreadable albatross of a mini has hung off the neck of the ongoing ever since Prime surrendered. First, time was spent establishing the premise for the mini, and then dispersing characters for it, now issue #4 is forced to re-integrate it. A waste of time considering the only effect it seems to have had is that Bumblebee is exactly like he was in #3, except with go faster stripes, ala the live action movies. How original.

One can hardly blame Mike Costa for reverting to his default Bumblebee. Zander Cannon left him an undefined mess at the end of Bumblebee 4. Costa even tries to mention the villain from Bumblebee, presumably to aid in tying the two narratives together. Sadly, the line is uttered by “Rodimus”, who it seems would be unlikely to even know what happened to Bumblebee in his absence, much less the identity of his assailants.

The other two thirds of the book are filled with Prime pleading the Fifth, again, and, *gasp*, actual forward story motion!

Sadly this modicum of story motion is marred by a big dose of predictability. If you didn’t see the ending cliffhanger of this issue coming the last few issues, you need to pay more attention when you read comics.

Once again, Swindle is the saving grace of the book. He’s the one who needs a mini series.

It’s still fun cliffhanger, and I can’t wait for next issue. Maybe free of Bumblebee baggage this series can finally start to move on. Though if Striped Bumblebee starts talking through the radio, or decides he’s too cool for Prime, I may have to switch to Archie comics.