For some fans, this has been 24yrs in the making. Ever since the G1 fans felt shafted after not making a transformable figure, they have been lying in wait, hoping Hasbro might come to their senses. When the Animated series appeared and Arcee became a key background character, that hope was vigorously renewed. When the figure line was canceled before her release, however, tempers flared. Though she is a bit of a Holy Grail, Arcee is out and about if you have access to a Toys R Us.

Arcee has dedicated her lift to the power of information. As a teacher, she saw to it that young Autobots all learned the value of the facts, and how to tell the truth from lies. During the war, she turned her dedication to the truth to carrying data for the Autobot High Command, often from deep behind enemy lines. She will face any danger to defend what is right, no matter what the cost.

One of the top sword fighters on Cybertron 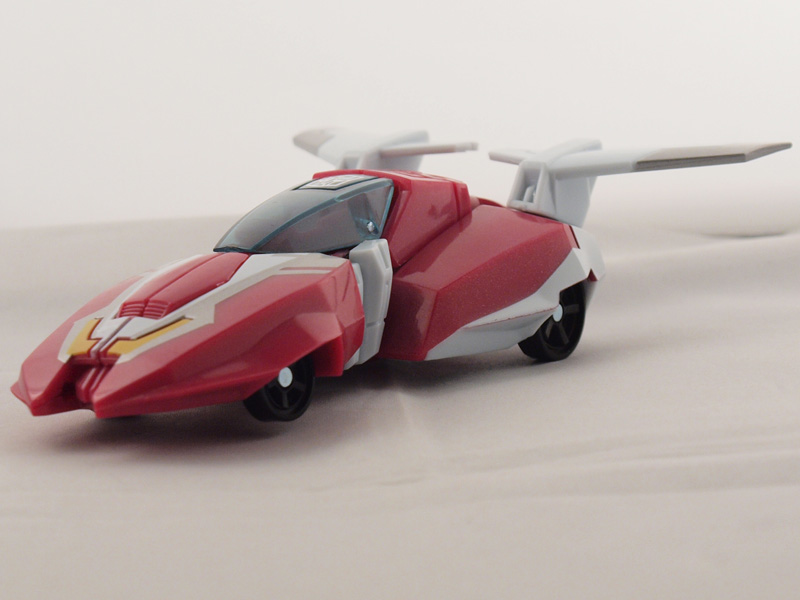 In alternate mode, Arcee is a Cybertronian rocket car. Don't expect this to be a direct update to the G1 open cockpit mode she had. This mode has an enclosed cockpit with a clear blue window. The car is more of a processed magenta color than pink. She also features white and gray accents, with painted yellow headlights on the hood. An Autobot insignia can be found on the back of the windscreen. 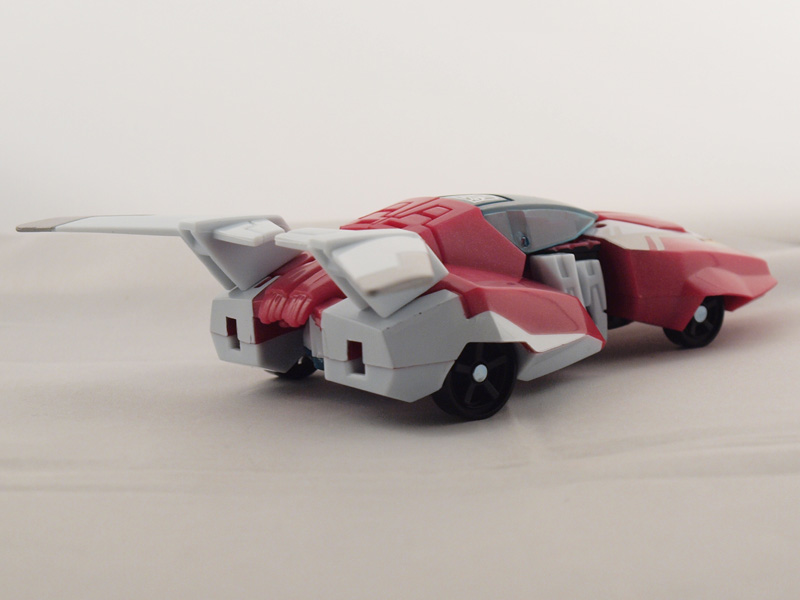 The design looks a bit clunky. The huge wings on the back look out of place, and the cheap looking black plastic wheels do nothing to help the abstract looks. The rear of the vehicle clearly shows her forearms and hands, which barely conceal her head. Yet... despite the odd design, there are angles that show the highlights of the design, particularly when viewing from a front angle.

Rotate each white piece on either side of the cockpit down then fold the windscreen forward. Rotate the waist 180 degrees. Take each quarterpanel and fold back. Fold back the arms to reveal the head. Pull down on the shoulders to align, then rotate the arms into place. . 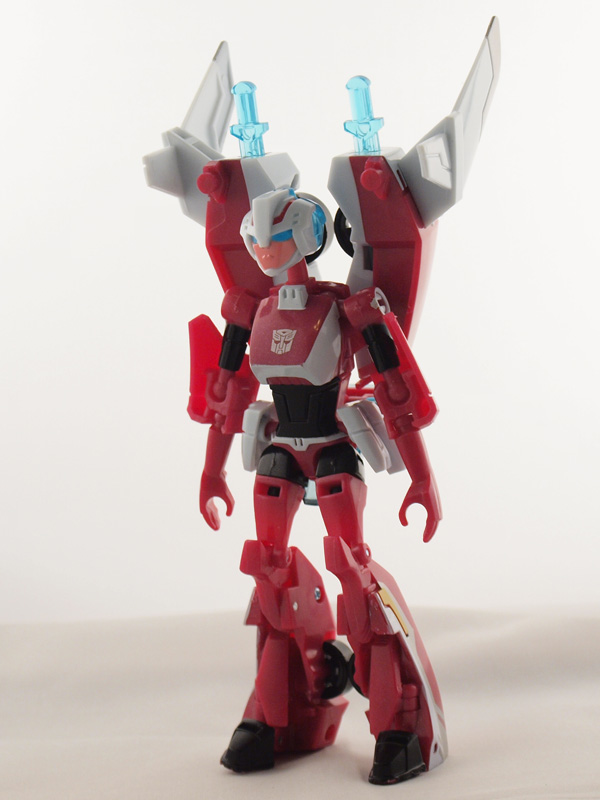 The robot mode bears a much closer resemblance to her G1 counterpart. The accents appear black instead of silver here. The head sculpt is piped blue. In fact, the whole back of the head is piped so there's plenty of ways for light to get in. Arcee comes with 2 swords that fit into either open palmed hand. The swords can be stored in the quarterpanels on her back, though they don't lock in place. 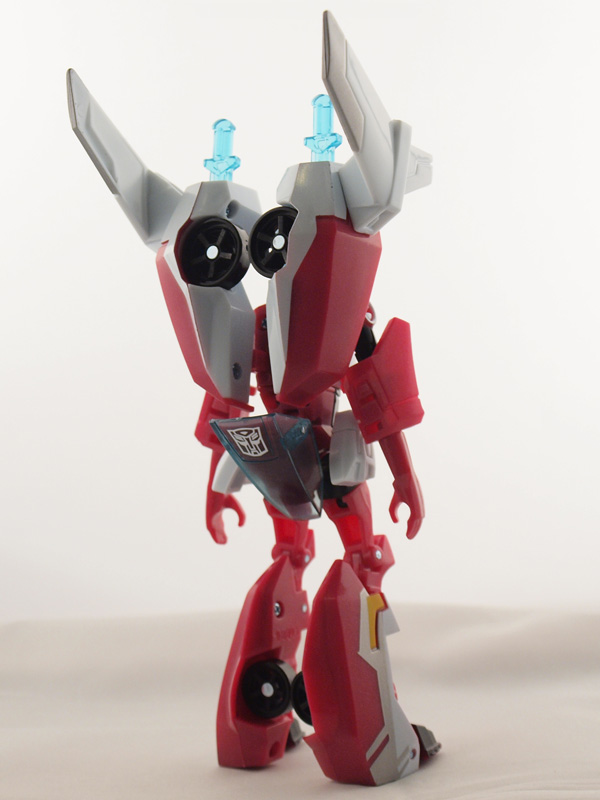 Two small issues with the figure overall. First, the reoccurring quality control problems. The left shoulder was missing a decent chunk of paint, or else it's sloppy overspray... I can't tell which at the moment. Also, the enormous wings have a tendency to fall off rather easily, as their mount isn't terribly secure. Fortunately, that gives you the option to leave them off which, interestingly enough, cleans the look up a bit. 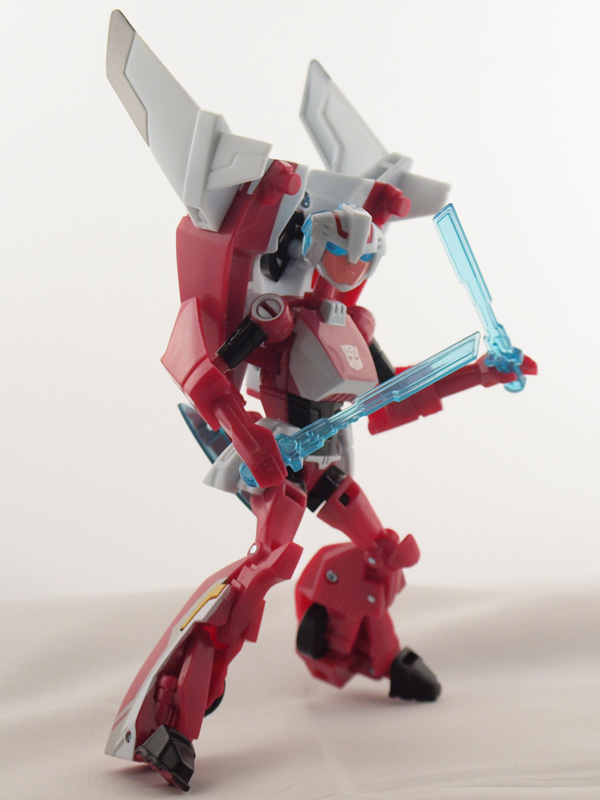 
Hips are restricted by the white attachments on her waist as well as the cockpit. Repositioning the white plates helps slightly.

- Slight restriction of the hips is the only issue
Overall:

- The closest we likely will ever get to a G1 inspired Arcee. The next trick may be finding one on the shelves.