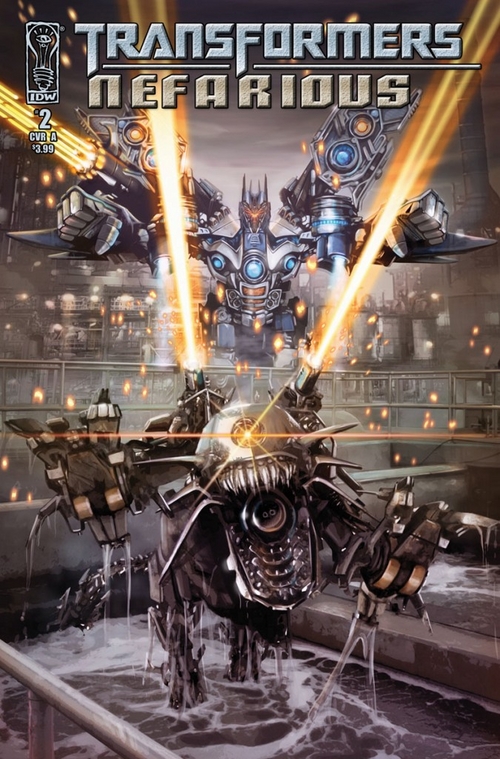 Transformers Nefarious is shaping up to be one of the better explorations of the Transformer Movie-verse. It accomplishes this by straying pretty far afield from its source material, however this story is not exactly where no Bot has gone before. It’s hard to miss the elements of nefarious shared by some of Simon Furman’s recent G1 story arcs.

Not that that’s necessarily a bad thing. Certainly there is a validity to re-imagining past concepts from one part of a franchise to be used in another. However this does feel a little soon to revisit the shadowy human based organization hoping to harness Transformer power plot Mr. Furman so recently (albeit successfully, in my opinion) in Maximum Dinobots. 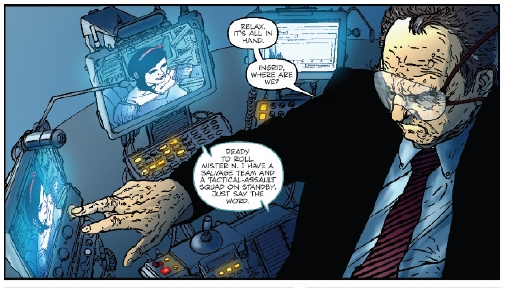 If this guy in the wheel chair becomes a Headmaster, I’m going to start calling this series “Maximum Moviebots”.

Nefarious #2 is a fast read, the story zips along, the plot thickens, and the only pauses are for some great action sequences. Not only has Carlos Magno made great strides in making movie-verse comic depictions bearable, but he’s also developed an exciting style of ripping them apart. You always know when some one is dead in this series.

Nefarious is mostly a comic about Soundwave, despite some focus on Prime, it usually feels like Soundwave is the primary protagonist. It’s fun to see this character get some personality. Furman has already been playing with him in the Titan comics, so we’re getting a refined version here.

If you’re not a fan of the movie-verse, this series isn’t going to turn you around, but if you are a fan or are on the fence, this is a good read. It also gives some (occasionally brief) life to the some of the lackluster peg warmers of the Revenge of the Fallen line as well as to some of the film’s underdeveloped characters.