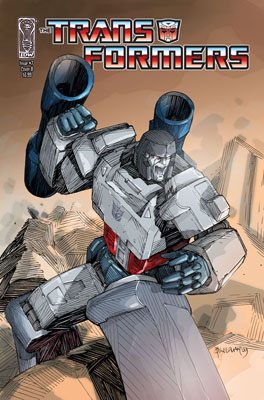 Finally! The wait is over! After seven issues IDW and writer Mike Costa are proud to bring to the Transformers ongoing series… more setup?! Seriously? Here we are over half a year into this most recent tub of “I can’t believe it’s not a reboot!” and we need almost a full issue of “Three Years Later…” opening montage?

Most of this issue is devoted to re-introducing you to the Decepticons, well… the other Decepticons, the ones who weren’t in the first arc, Wreckers or, (shudder) Bumblebee. Apparently they’ve been gone so long that the principal characters need re-introduction, mostly panel by panel. Their inexplicably dire situation is encapsulated in a brief sequence during which a pack of Decepticons hunt down another, and strip him for parts.

This gruesome scene might have been more compelling if it didn’t feel quite so much like a pale shadow of the violence that defined the Wreckers recent trip to Garrus 9.

Most of the rest of the Decepticon show and tell, is an exposition heavy conversation between Starscream and Bombshell. Like his Autobot opposite number Prowl, Starscream seems to have lost all semblance of character development from All Hail Megatron and reverted to his Sunbow Cartoon roots.

Frankly, this retro version of the penultimate Seeker is always entertaining, but it had seemed during “All Hail” that perhaps Starscream was going to change into something even more compelling. Apparently not.

The non-Decepticon portion of the issues is roughly six pages on Earth, where General Witwicky has finally emerged from the 5 issue traffic jam he was stuck in. The other 3 pages of Earth time are devoted to Spike discussing the military protocol repercussions of recent issues, and Spikes future plans. Riveting. 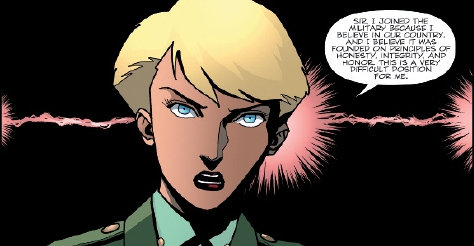 Ok, seriously. What exactly is happening behind her head here?


The fact that Optimus Prime clearly feels that he is just, too enlightened *emo sigh* to be in the same room with his fellow Autobots on the base with out unduly influencing their personal growth, only further alienates the once beloved character.

Back in Bombshell’s lab, it sad to report continuity issues. Bombshell, himself a point of continuity contention due to conflicting appearances in Megatron: Origin, Spotlight: Blaster and having an Origin in All Hail Megatron, has just invented the Cerebro Shell! Which would be cool if it wasn’t also a plot point in SL: Blaster 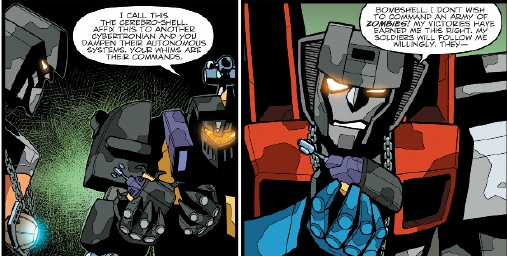 I hate playing continuity police, but I was an avid apologist and excuse maker for AHM’s faux pas. So another transgression on the same subject is really grating. One subject with so many errors in a continuity that only spans 5 years is just ridiculous.

This issue marks a huge change in look for the ongoing, E.J. Su is back, and better than ever. It’s only too bad that the art is totally obscured by the fact that every character is wearing camouflage all the time. At least that’s what colorist J.Brown seems to think. At first it seemed maybe the ‘Cons were just dirty, then it extended everywhere. The jigsaw color pattern just about ruins the issue. 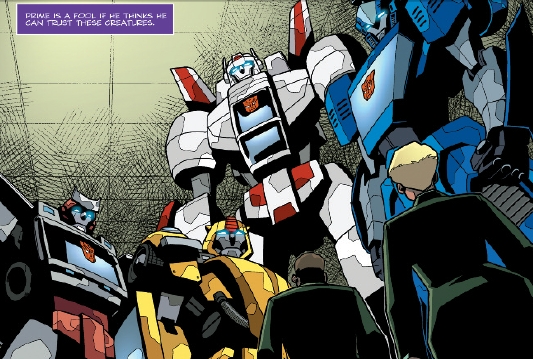 The whole issue seems to climax in telling us something we already know, Megatron is still alive. I guess if you’d only read Continuum this might come as news. Lets not go there any further.

At some point the decision was made to turn what felt like a complex interstellar war, into a base pitiable family feud. This Decepticon situation is meant to feel new, but we’ve seen this episode, Five Faces of Darkness - Part 1. IDW’s ongoing needs to stop spending so much time justifying this story, and start telling a story that doesn’t need justification. Who is this is supposed to entertain?