Like most of you, I rely on store shelves and online vendors to obtain figures for review. On very rare occasion do I have figures sent to me pro gratis or otherwise given to me. Imagine the surprise when I recently became the recipient of not only a complimentary figure, but a figure who has not hit retail yet. Even more, it's one of the new War For Cybertron figures! Therefore, I'm pleased to bring you a sneak peak of WFC Bumblebee. 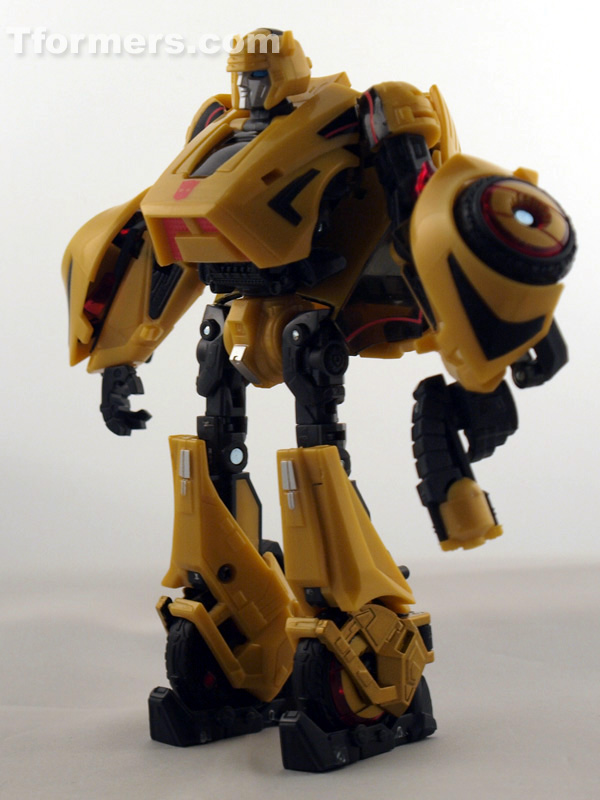 It doesn't matter what line you put him in, Bumblebee is instantly recognizable. Maybe it's the yellow paint (in this case, more of a mustard yellow) or the dead on head sculpt. At any rate, Bumblebee is represented in true form. Along with the yellow, the upper appendages are black, as well as the abdomen. There's also red on the chest. Curiously enough, the head looks like it's piped for blue eyes, but the eyes are painted in. 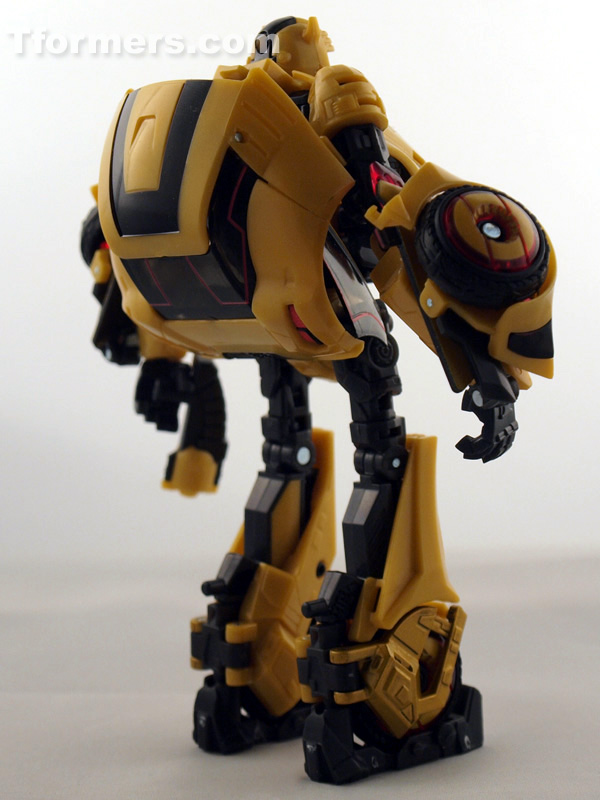 For weapons, BB has two choices. He can stick with his hand held pistol, which can slip into any hand via a quasi-peg setup. The fingers are open, but there is still the roundish peg entry to grasp a weapon. Should you desire close combat, he has red energo-blades that ratchet out from each forearm. No spring action here, folks. The weapons serve BB well, and the tire on the forearms doubles as a nice shield. 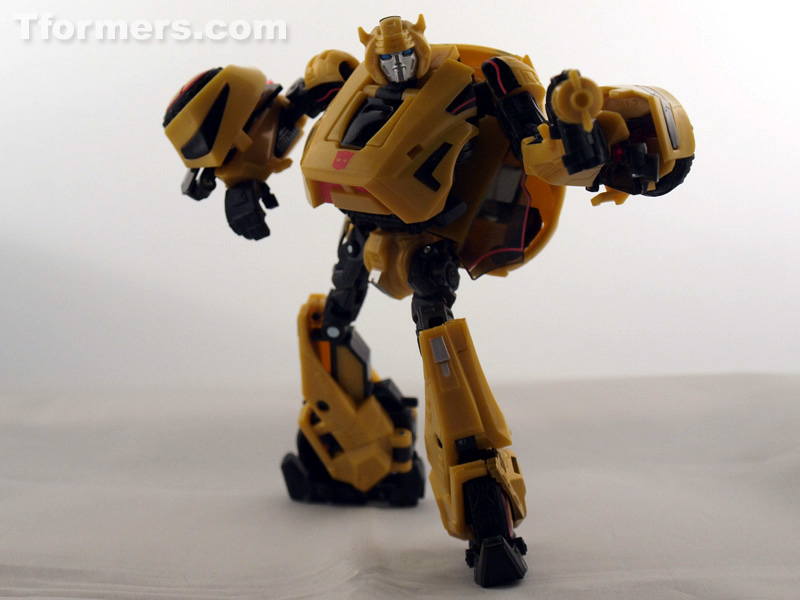 
For a Deluxe, the joint setup is excellent. Just be careful with rotating the waist or bending the legs back due to the backpack. 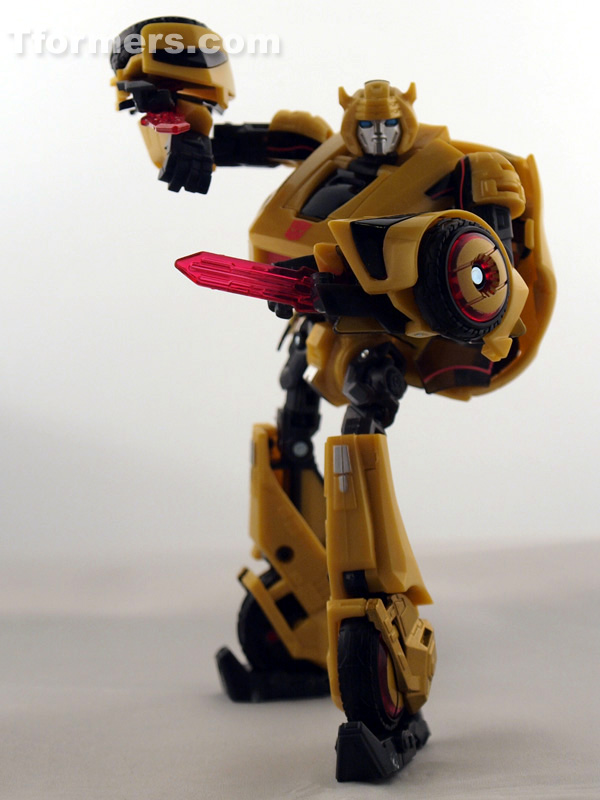 Listen carefully: THIS IS NOT A KID'S TOY! Why do I say this? Because this has to be one of the most complex transformations for a Deluxe that I can recall. We'll start at the feet. Grab each foot and peel it back 180 degrees, taking the ankle shield with it. You'll then fold that shield so it lays up against the inner part of the leg. Twist each foot on it's ball joint so that the toes point each other, then fold the feet up against the shield. Looks wrong, I know. Patience. Pull out the wheels then, after making sure the legs are straight, push on the shins to collapse the lower legs into the thighs. Kink each thigh so that you can theoretically mate each foot flush. It'll all come together later. Now, to the upper half.

Carefully pull the backpack away from the chest, as it's cantilevered on multiple hinges. If done right, the roof and rear end should be whole. Bend back the legs so they sit against the rear portion. Bend BB's head completely down, then push on the upper chest panel to flip the head underneath. Do this carefully, as clearances are tight. Pull the shoulders inwards and back. Twist the forearms so the wheels faces out. Fold the forearm into the upper arm and mate the peg into the slot built into his shoulder. Pull the wheels out from the forearms and latch them to the front fenders. The remainder of the process is latching various pegs and slots to pull the bodywork together. 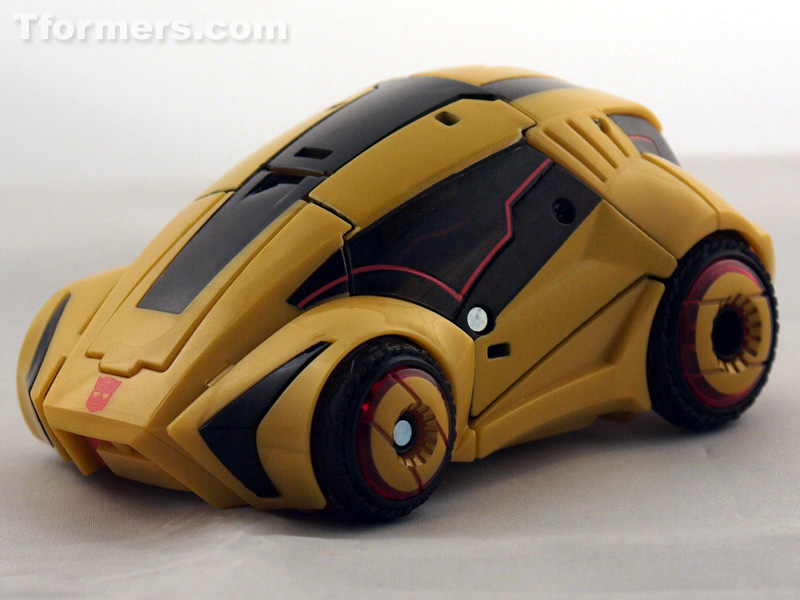 The end result is something you might find at the Tokyo International Auto Show. Officially, it's a Cybertronian courier. Black shows on the roof and windows, with red accents on the sides and wheels. The wheels are plastic with simulated tread. 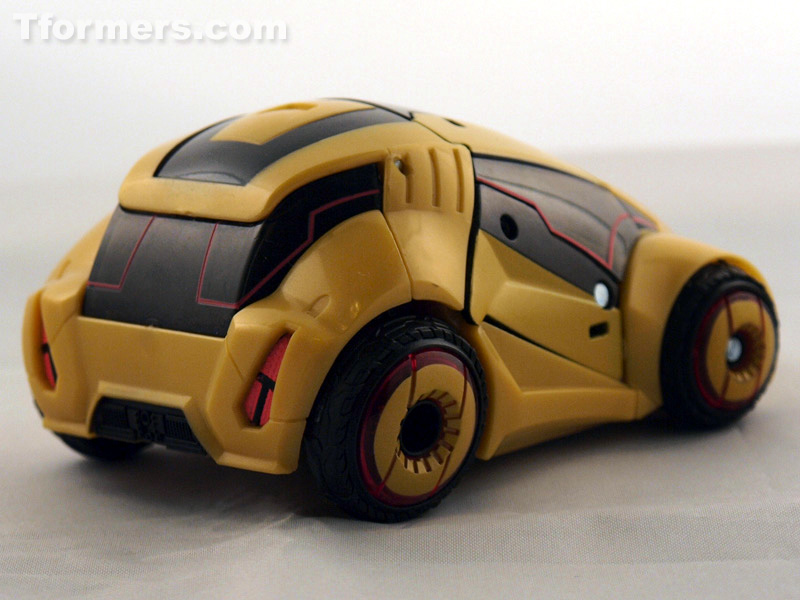 The size of the vehicle might fool you to think this is a scout class. Furthermore, the panels and seams all come together to make you think there's much less of a transformation than there really is. In essence, this is what a Transformer should be. Indistinguishable between vehicle and robot mode... well, besides the armor color.

For such a complex transformation, there's little evidence this was ever a robot
Overall:

It could very well be that Hasbro has finally listened to the fans. If Bumblebee is any indication, the WFC line could be that sweet spot fans have been looking for.