Optimus Prime has previously been depicted in his Cybertronian mode with the Titanium line was sold. Although the figure was loose, the design seemed pretty hard to beat. Proving that you can't have more than one universe when it comes to figures, Optimus' Cybertronian mode has been rethought.

When he first became leader of the Autobots, Optimus Prime was not certain he wanted the responsibility. The ware with the Decepticons was going badly, and it looked like there was no end in sight. he vowed to himself and to the warriors under his command that he would never surrender, never retreat, and never stop fighting until the Decepticons were defeated. 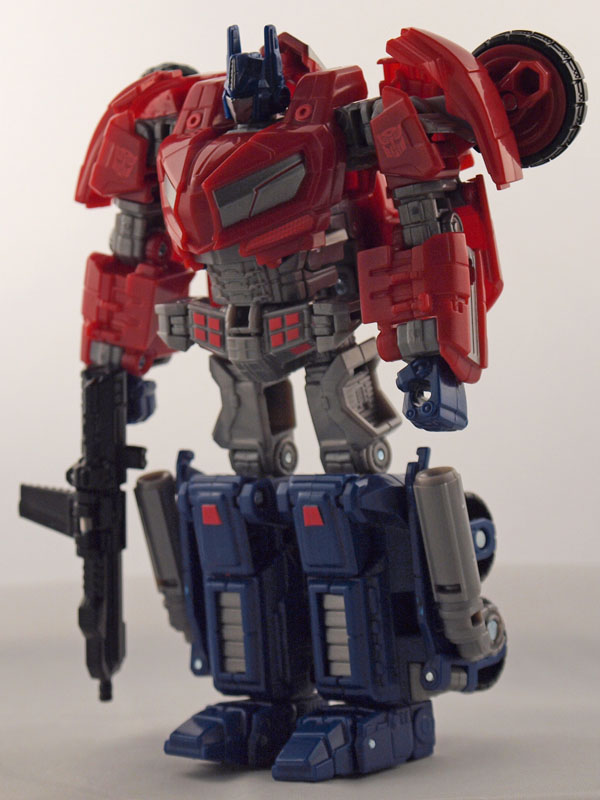 At first glance, it's easy to mistake Optimus Prime for the Classics iteration. Upon closer inspection, nothing could be further from the truth. The coloration is true Optimus throughout. The head sculpt is a great representation, even is there is no light piping for the eyes. 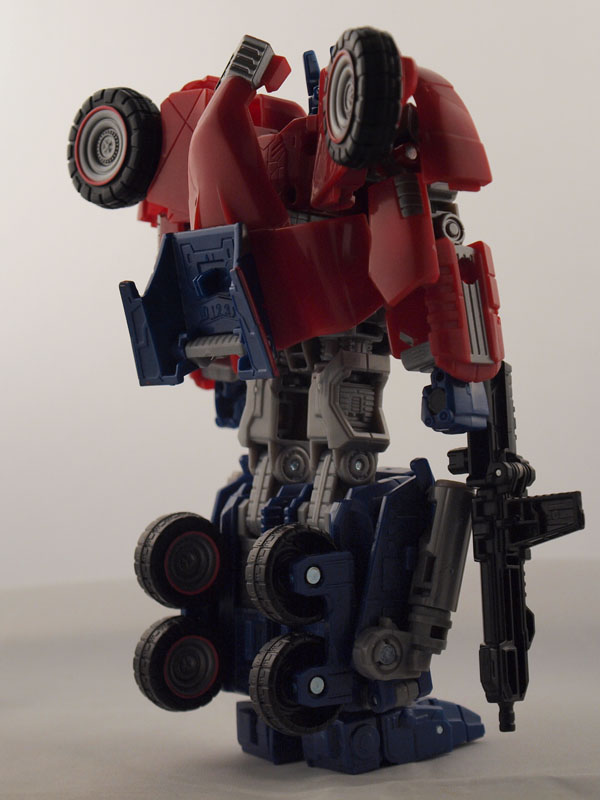 Although Optimus doesn't have his battle axe as depicted in the game, he does have his standard issue buster rifle. Should you choose to send him to fisticuffs, his rifle stores conveniently behind his back. The only thing that might be a detraction is the amount of kibble, and there is no shortage of it. Back, arms, legs... you can find it. 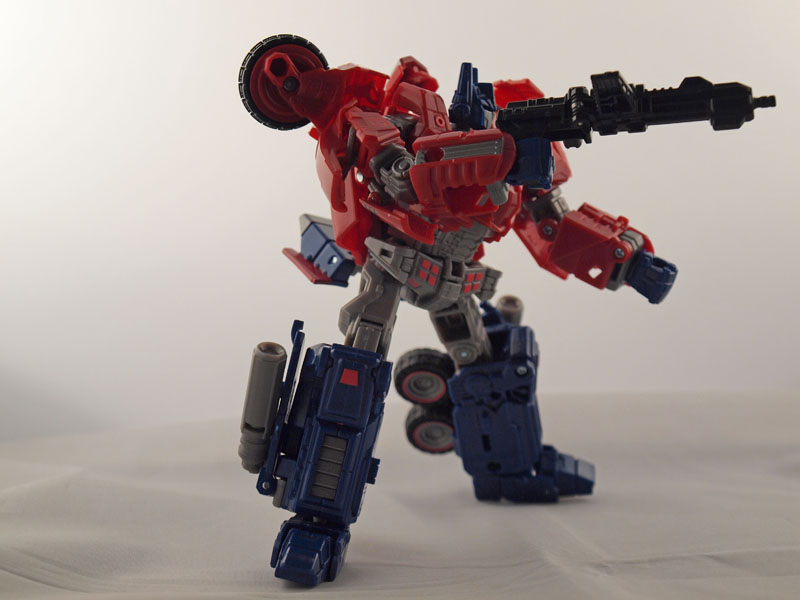 
The hips fall a bit short on movement, but if you reposition the plates that wrap around his waist, you can get more additional range. Same goes for the shoulder plates.

There is a consistency with the War For Cybertron figures in that they have very complex transformation. Lift up the waist plate and pull up the ends to extend the plate. Fold the hands back into the forearms. Fold the wheels on his back so they they sit against his shoulders. Peel the back down. Push the head back. Rotate the chest 180 degrees. Fold the plates on the side of the legs down, then flip the wheels around so they face front. Replace the plates to their original position. Fold the toes up against the legs. Bend the knees 90 degrees and then push the legs forward so the knees rest halfway down the legs.

Pull down on the hips to break away the hinges. Rotate the legs 180 degrees, then rotate the back plate 180 degrees. Rotate the shoulders so the Autobot insignias face up. Fold the arms up then fold the arms around so they rest behind the front wheels. Finish folding the legs forward. As you flip forward the plate on the rear wheels, reposition the stacks. When done, the plate will latch onto the folded arms and the stacks will point back diagonally. Clip the front fenders onto the bumper. Fold the plates formerly behind his arms back so they flush against the stacks. Position the back plate to form the roof of the cab. Finish everything off by folding the blue plate back. 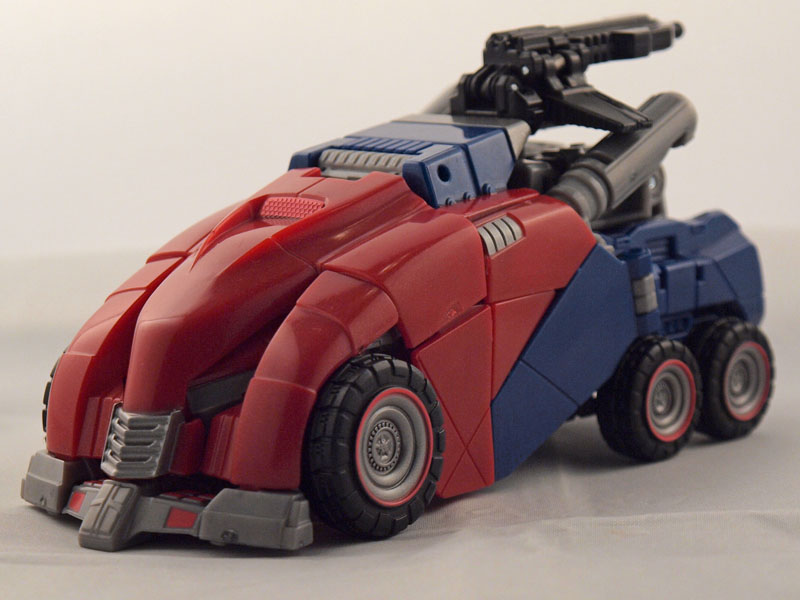 The alt mode looks something like you might see in the Marvel Crossover line, specifically an alt mode for Spiderman. The front wheel is considerably larger than the rear ones, giving the front and rear a somewhat disproportional look. However, it does still have an Optimus Prime feel to it. 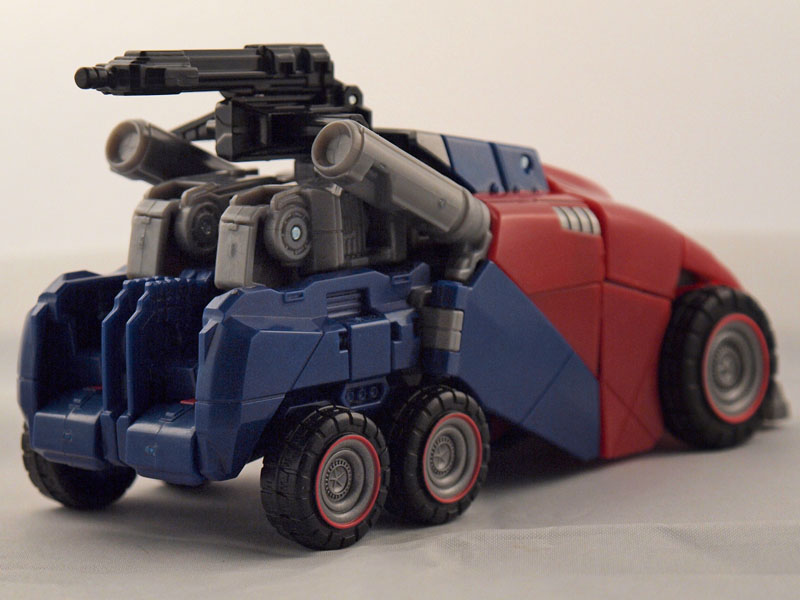 The buster rifle folds up and pegs to the roof. However, the clip that keeps the rifle compact is hair triggered so the gun tends to snap out. Some people might think that it's hard to pull off a Deluxe class Optimus Prime because of scale. While he is on the small side, he's still a great Optimus.

Smallish and somewhat kibble ridden, but it's forgivable
Alt Mode:

Awkward looking at first, but it grows on you after awhile
Overall:

It may not be the best Optimus Prime in recent memory, but still a keeper