At long last, Transformers Hypefest 2010 has come to a close as High Moon Studios and Activision have finally blessed us with the release of Transformers: War for Cybertron. No longer just the light at the end of the tunnel, War for Cybertron is on the shelves: ready to be enjoyed, judged, nitpicked to pieces, and reveled in by fans.

In a year filled with little other news than Transformers 3 eye candy replacement and the occasional webisode, Transformers fans, still licking the emotional wounds of Revenge of the Fallen and the cancellation of Animated, couldn’t get enough news about this new direction for the historically lackluster Transformers video game property. Until, that is, they had had too much, and hope gave way to hype. Now the question is: Can this game, this third-person shooter, live up to the mountain of publicity and speculation it has generated?

Honestly, it’s doubtful anything could. 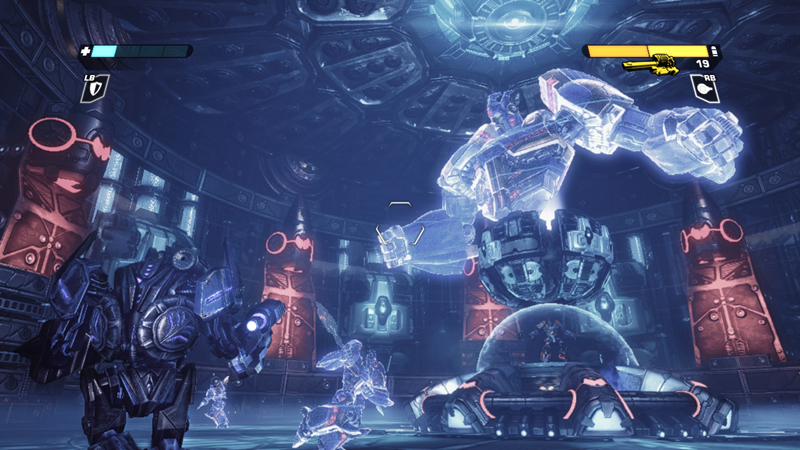 That being said, this is a great game. Any gamer who enjoys a solid third-person shooter will have nothing to complain about here, and any classic Transformers fan should be overjoyed with the characters, context and dedication to the franchise that High Moon has shown our favorite bots. There has been no reason to expect to get Transformers games this good. It’s kind of a miracle.

The chief thing Transformers fans need to bear in mind here, though, is that this game is solidly placed within the context of the 1980s cartoon and movie. That is not to say there is 100% continuity with the original shows (like they had continuity…) but the characters, story, and feel of the universe simply ooze Sunbow. Homages to the film and show are everywhere.

Imagine this game as a revival of the Transformers made in a universe with no Transformer media between the end of Season 3 of the old show and today, and you’ll be on the right track. You can expect most characters to be almost exactly who they were on TV in 1985.

What color is Rumble supposed to be again? *Puts FIBRIR Helmet on.* 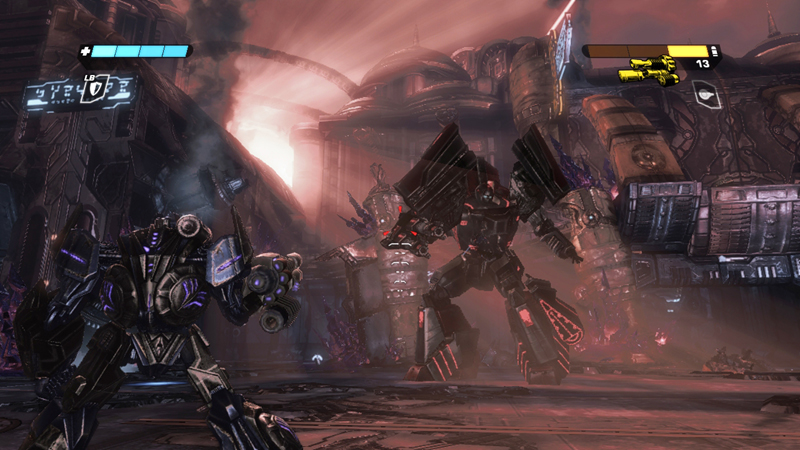 The Decepticon campaign is Megatron- centered, with the only significant deviation being a flying level featuring the original Seekers (Flight of the Repaints = Awesome). This is not the story of Megatron’s rise to power, nor the beginning of the war. It does feature some events that are formative to the story as we know it, but this is not an origin tale.

Neither so much is the Autobot campaign; as promised we do see Optimus take charge of the Autobots, but… it’s complicated. To say that you see him “become a Prime” here is overstating it as presented.

Characters meet for the first time, familiar items emerge and situations taken for granted are illuminated, but overall this game carves a comfortable place of its own near G1 cartoon Transformers lore, and makes it a more satisfying and compelling place. Frankly, the almost episodic nature of the story came as something of a relief – it left plenty of space for more game, more story, and didn’t offend any of my preconceived Transformers sensibilities. 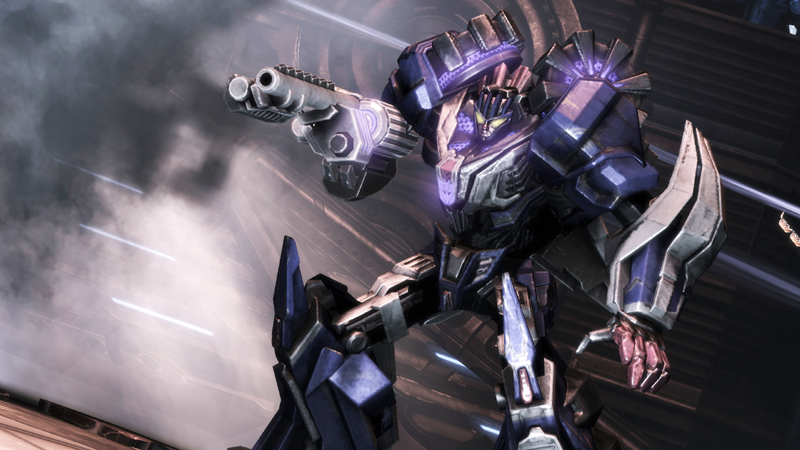 Level design is linear, but no more so than average. The scenery is so detailed, intricate, and on occasion spectacular, that you never feel like you’ve been somewhere before. Your objectives are dynamic enough that you feel propelled forward by the story, never corralled by the level walls.

The “defend this area full of turrets” scheme is a common occurrence, but most instances feel story-driven, and turrets usually equal fun. There is, however, a “Defend the moving elevator! With turrets!” sequence that just feels like busywork.

Cybertron is a rich and varied environment which will be recognizable to any longtime fan, and will be enjoyed by any connoisseur of gaming environments. You can be sure of repeat playthroughs revealing details and Transformers references that you missed the first time.

The setting is one of the game’s greatest features, so be sure to enjoy it. 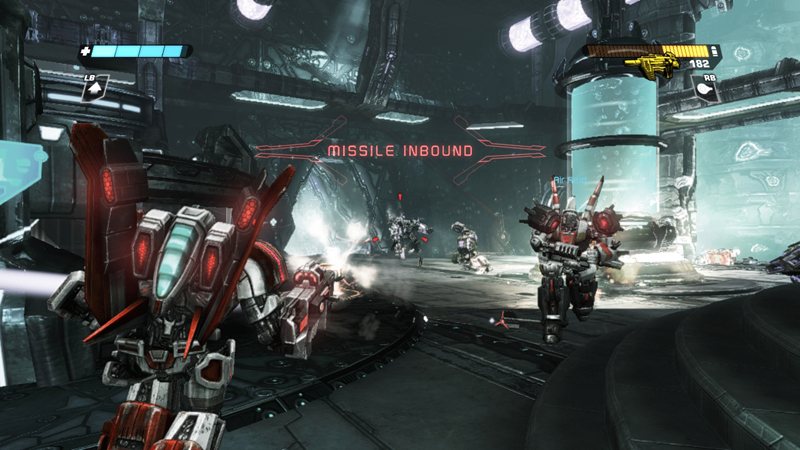 Your weapons consume ammunition and not just for show, you’ll need to conserve ammo and place your shots wisely, lest you find yourself hip deep in laser-fire with out a pistol.

Those who played the multiplayer demo on Xbox Live may not have gotten the right idea about the game as a whole, nor even the scope of its online play. The multiplayer aspects were significantly more fun after gaining an organic understanding of the character abilities, weapons, and effects of alternate modes on combat in the single player campaigns. For instance, the ability to fly at the drop of a hat significantly affects strategic game modes, but leveraging that advantage takes practice. 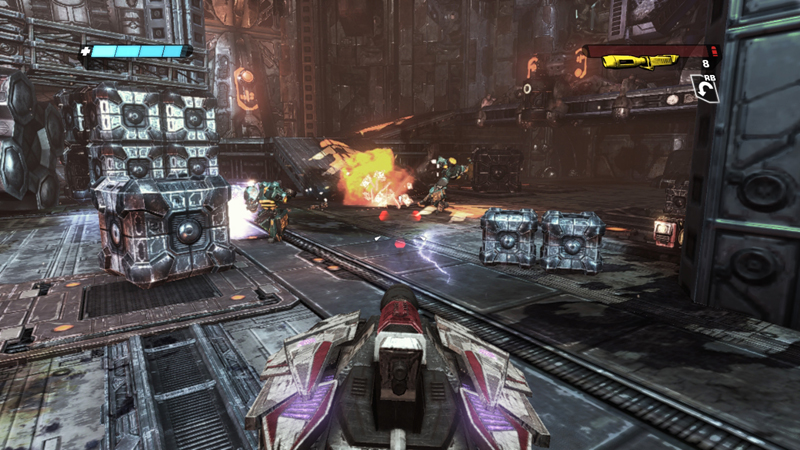 Control for the most part is tight; aiming in particular feels well tuned. Transitioning from robot mode to alt mode can take some getting used to. Once you get the hang of it, though, it becomes a fluid and natural part of play that influences your strategic decisions and offers opportunities rarely explored in this genre. High Moon, rather that basing their game around the classic Transformers gimmick, have used that gimmick to add something dynamic and fresh to a tried and true game format. After all, adding “Hit them with a truck” to your list of solutions in a tense firefight is nothing to sneeze at.

In a move that I’m sure will worry many players, the transformation button is located at the L3 position initially, with the melee on the R3. Thumbstick buttons are not always our friends, but in this case, High Moon’s reasoning is sound. A player, using these buttons as placed, will be able to skillfully move, fire, steer, transform, accelerate, and utilize each character’s two special skills without moving a thumb off the controller.

However, “heavy stickers” (one of which the reviewer happens to be) will quickly want to switch to the second controller layout. It re-maps the button to the position formerly occupied by the weapon switch, moving that function to the D-Pad. If you can master the first layout, the advantage is clear, but if you’re one of the many who find themselves unexpectedly crouching when you mean to make a break for it in Call of Duty, you may want to save yourself the trouble and just change this setting at the outset. Sadly, the melee remains as-is.

More flexible are your Y-axis options. The Y-axis inversion can be toggled on or off for each individual alt mode separately, including your robot mode. 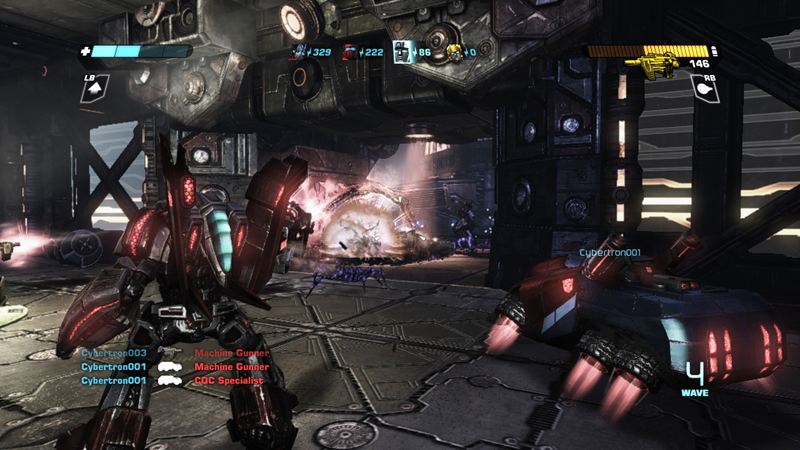 Teamwork is the watch word in a War for Cybertron multiplayer match (apart from single player deathmatch). High Moon has crafted a set of customizable character types whose balanced interaction is remarkable. A team skilled in utilizing the unique talents of each kind of character to support one another is nearly unstoppable.

The characters have a limited selection of weapons, and upgrades for each class. The color scheme, while customizable, only provides a limited palette for each chassis. Online play allows your characters to level up as they are used, and the upgrades you receive rapidly make palatable differences in play. 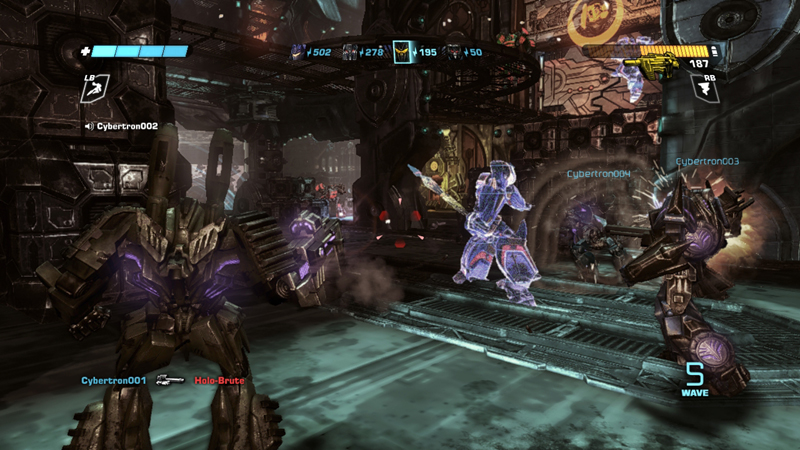 This encourages play with multiple classes, which is worth mastering. Being a versatile player within this character set can be a great asset. Each character type has valid offensive and defensive functions. The victorious player will at least understand them all.

The most disappointing aspect of the multiplayer mode is the manner in which flying characters are limited. When a flier goes too high, they are simply stopped by an invisible ceiling. Invisible walls are always fail. Perhaps in future games when fliers affect multiplayer balance, it could be addressed more subtly, possibly through airborne weapon range limits or vertical visibility control. 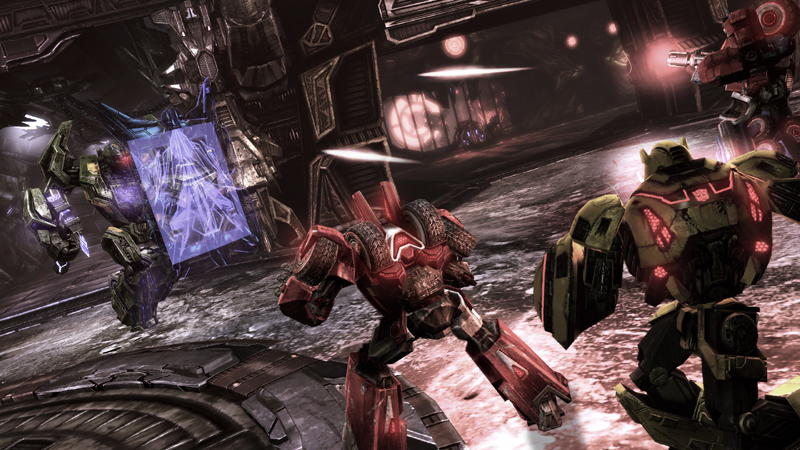 War for Cybertron is the best Transformers game ever, and it’s a slaggin’ good game in general. While the base play is derived from some of recent years’ favorites, in sharp contrast with most licensed games (which are hobbled from the outset by a mountain of preconceived kibble, superfluous, or flat-out contrary to the play needs of the game), its subtle innovation comes from a masterful utilization of its license’s gimmick.

Perhaps the only like franchise to have video games conceived within it that were not intended to be tie-ins or a redux of existing media is Star Wars – a franchise which can claim some of gaming’s greatest achievements under its belt. War for Cyberton was built from the ground up to be a game; written, directed, designed, populated, rendered, and tested to be played; and it shows.

High Moon’s distinguished treatment of the franchise in and of itself is a distinct leap in the right direction for all of Transformers media. They’ve created one of the few, perhaps the only, piece of Transformers in motion media that could have stood on its own without the power of its name and history to justify it.

This game has what makes the Transformers great.