Gestalt. Combiner. Super-Robot. Call it what you will, but most fans will agree that an original worth recommending hasn't been released in about 10yrs. Energon tried it, but the result seemed mediocre. ROTF Devastator tried it, but got it all wrong. Now, a new subline is out called Power Core Combiners, where drones merge with a commander to create a combiner. Will this buck the trend?

Bombshock was once a member of the most elite unit in the Cybertronian military. he betrayed his comrades, and his reward was to become a commander of a powerful Power Core team. Even alone, each of his drones has as much firepower as the average Autobot. Together, they are nearly unstoppable. 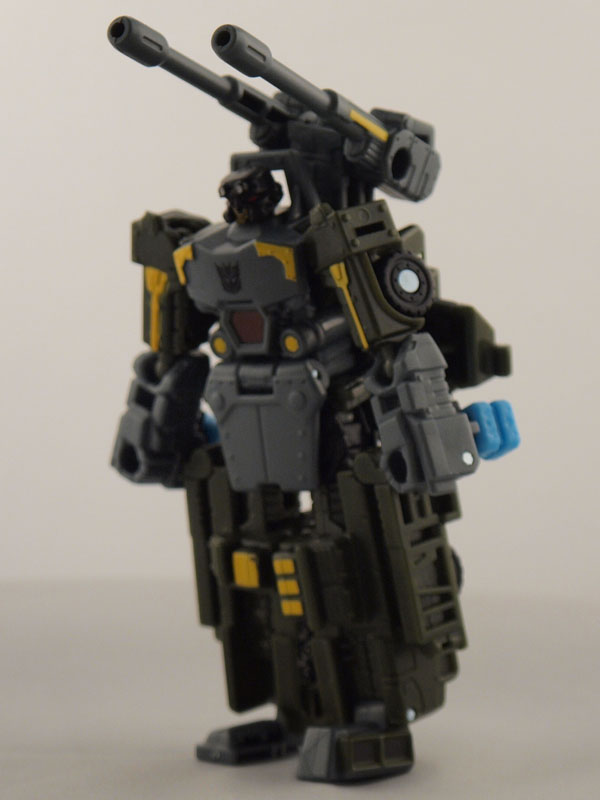 Bombshock captures some of the essence of Onslaught, the previous commander of the Combaticons in another time. He has green limbs and a metal gray body, with yellow thrown in at various places. The head sculpt is very nicely done given it's small size. 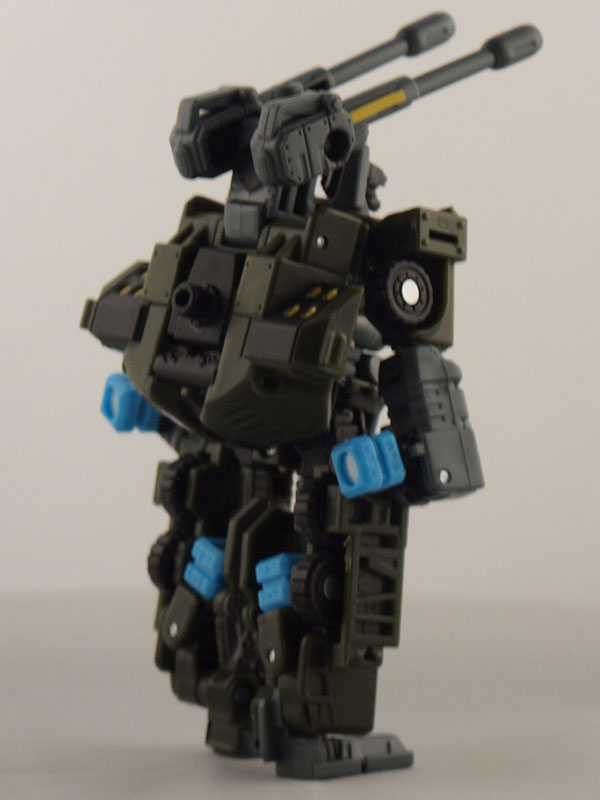 The turrets on his back can either be aimed at an angle (as shown) or can completely swing to lay on his shoulders. Overall, Bombshock is about on par for scouts in the Revenge of the Fallen line, which is to say stellar.


The groinplate can be lifted up to get articulation in the waist and to bend the hips forward.

Raise up both arms to they're over his head. Twist the forearms so the blue pegs stick out. Bend both arms inward and interlock the hands via a tab. Peel the turrets back and rotate the turret assembly 180 degrees. Lift the groinplate, rotate the legs 180 degrees and replace the groinplate. Fold the feet into the front end. Swing the plates on the side of his legs to the back of the vehicle. Lower the turrets to finish. 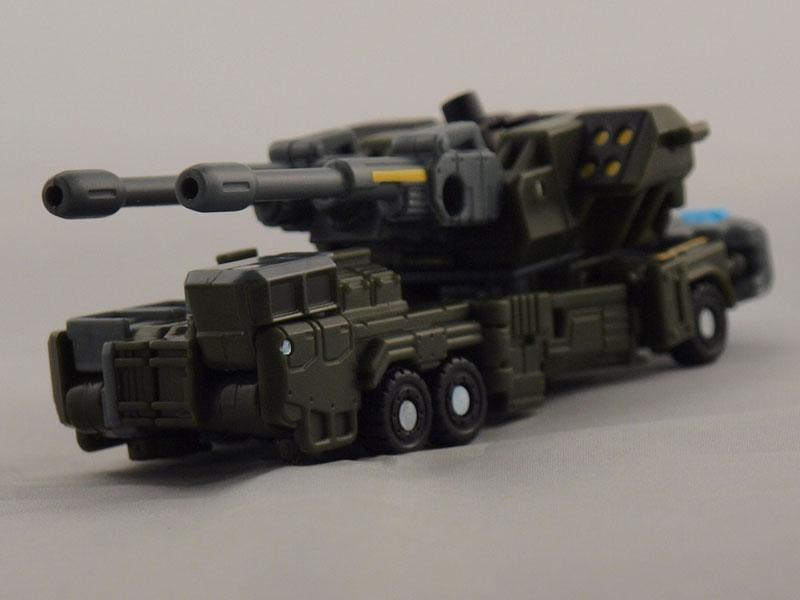 Bombshock's alt mode is a surface-to-air defense vehicle. Not only does it have twin turrets that are independently adjusted, it also has a pair of 4-bank missile batteries. To finish things off, you have not only one but TWO minicon ports. 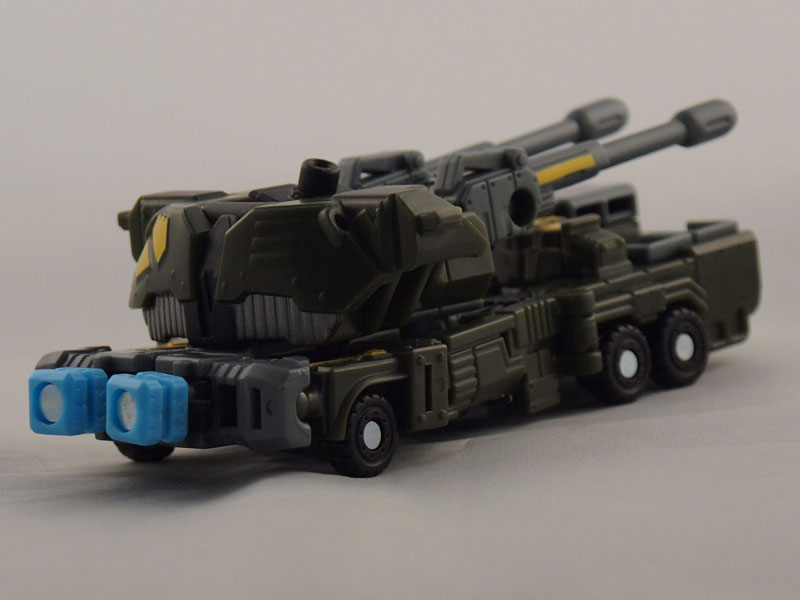 As well as being able to aim each turret separately, you can also rotate the turret assembly a full 360 degrees. Though the front end of the vehicle is done nicely, the rear end tends to lack due to the open ended rear and the exposed combiner ports.

Bombshock features four drones that do not have an individual robot mode. They are an armored halftrack with a roof mounted cannon, a military truck with a pair of missiles in the bed, a fully treaded missile launcher tank and a double barrel tank. Each Combaticon drone has weaponry and, with the exception of the missile launcher tank, can rotate their payloads to aim. For being Legend sized vehicles, they have a good amount of detail. These drones combine with Bombshock (or any other Commander) to form the Combiner mode.

Start by peeling back the turrets and rotating the turret assembly 180 degrees. Pull up on the black Minicon port on the top of the assembly to expose his Combiner mode head. Spread the arms out 90 degrees. Pull the turret assembly forward so that it covers his Commander mode head and forms the Combiner mode chest. Rotate the forearms so the blue tabs point down. Bend the arms up 45 degrees to lay against his chest, the plug the forearms into the tabs on his chest sides. Fold in his feet and expose the blue tabs hidden behind his legs. Rotate the legs outward 90 degrees so the silver is showing. Bend the hips 45 degrees outward, then bend the knees in 45 degrees inward to form the Combiner mode thighs.

Each drone, contrary to what might be out there, is NOT universal. They cam mount to any other Commander in the PCC line, but they CANNOT be either an arm or a leg. The military truck and the halftrack are both leg modules, while both tanks are arm modules. The port for the halftrack is located at the rear. The halftrack's roof forms the shin. The port for the truck is located on the front grille. The truck's left side will form the shin. The missile carrier's port is located in the rear. The tank's port is located underneath towards the front. As you plug each port in, the drones will automatically transform via spring action into their limb components. 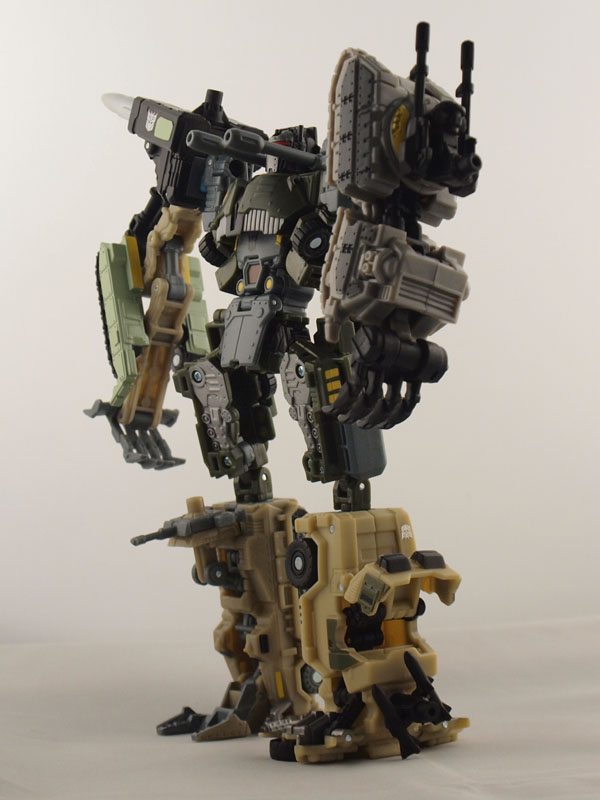 The end result is a combined robot mode that stands equal to a Voyager class figure. On the surface, Bombshock seems nicely executed. He has perceived solid footing and the limbs look like a good fit. 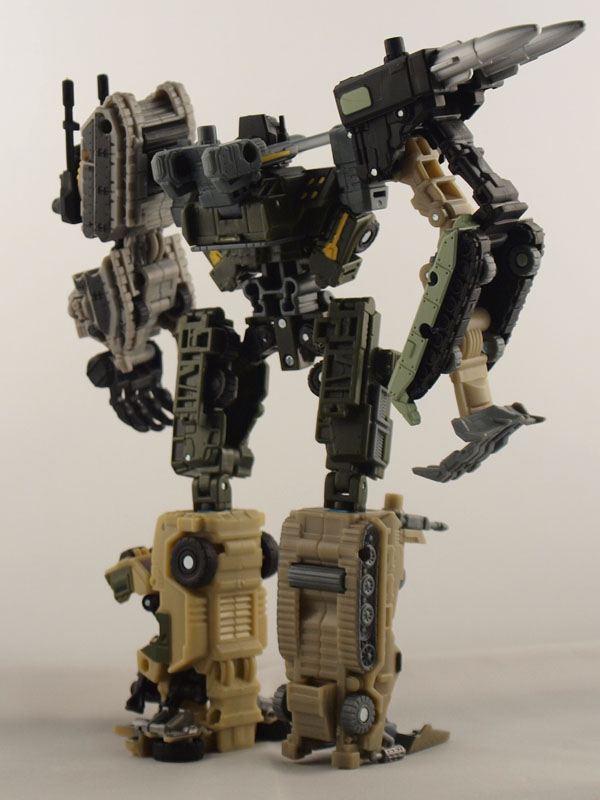 However, the spring loaded gimmick is also the achille's heel, as the springs are a bit too strong. This was especially noticeable on the left leg component, as it constantly tried to angle off it's peg. As far as articulation gos, you have 45 degrees on the knees, full hip and rotating shoulder movement. However, you may get nervous as the spring and peg system doesn't seem terribly stable.

Comparable to most Scouts in the ROTF lineup.
Alt Mode:

Great usability, but lacking in the rear end.
Combiner Mode:

Would have been better if the left leg would stay in place.
Overall:

Still no gestalt by any means, but for a Scout class he's worth considering.