Previously, we reviewed Bombshock and the Combaticons in the new Power Core Combiners lineup. This time around, we look at the Autobots. Specifically, we look at Skyburst and the Aerialbots.

To be given command of one of the first Autobot Power Core teams is a great honor - one that Skyburst isn't sure he deserves. he uses his enhanced abilities to execute search and rescue operations in conditions too dangerous for human crews - or even other Autobots. Together with his drone companions, Skyburst protects the skies from the Decepticon threat. 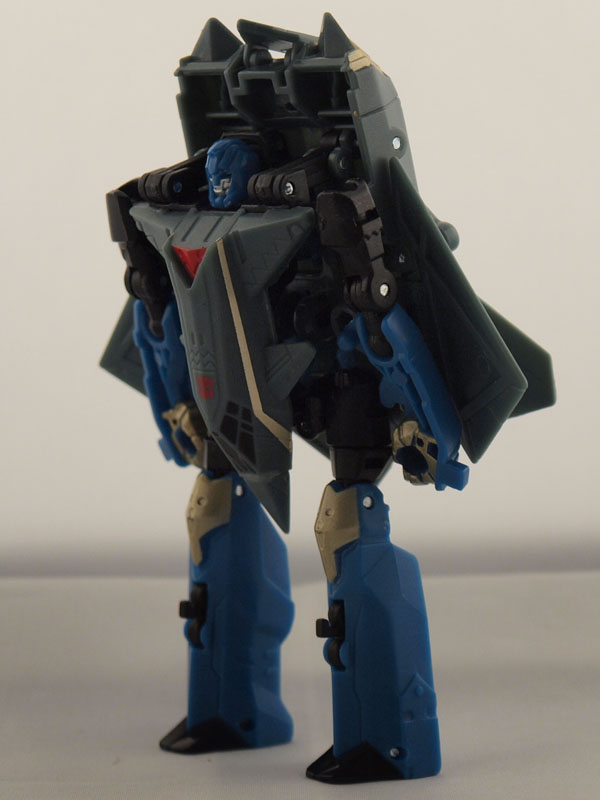 Skyburst doesn't seem as well done as Bombshock was. He is gray with blue limbs and gold on the knees and hands. The head sculpt is detailed nicely enough, but Skyburst has more of a Minicon feel going to him than a Scout class. 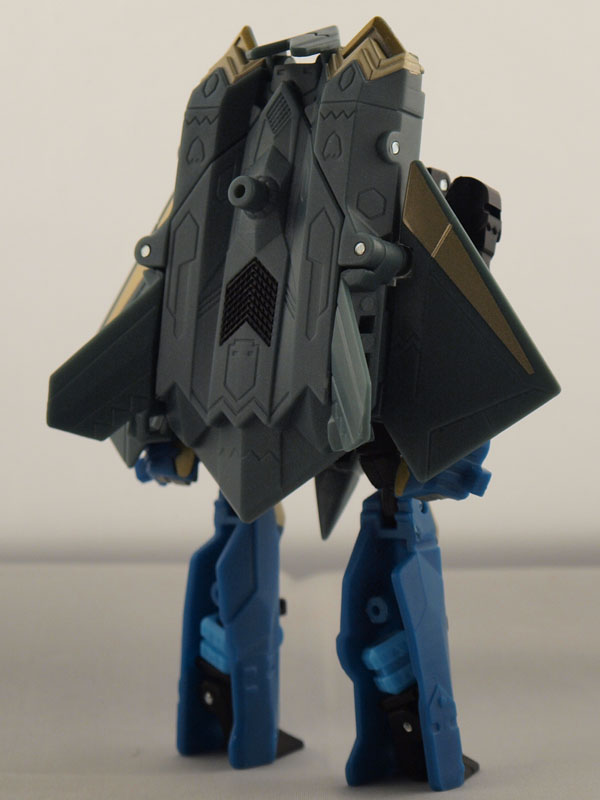 He definitely isn't as well put together. I had constant problems with the right forearm popping off the ball joint. Even when on the ball joint, it was real lose. It could be chalked up to QC, I suppose.


Poseability is decent, but he tends to be a bit back heavy.

Carefully separate the waist from the body. If you're not careful, you'll either pull the back assembly out or dislodge the trap door on his back. Flip the back end 180 degrees. Fold the shoulders in and connect the round peg on his forearms to the belly of the fuselage. Fold the legs into the belly, connecting them to the large pegs. 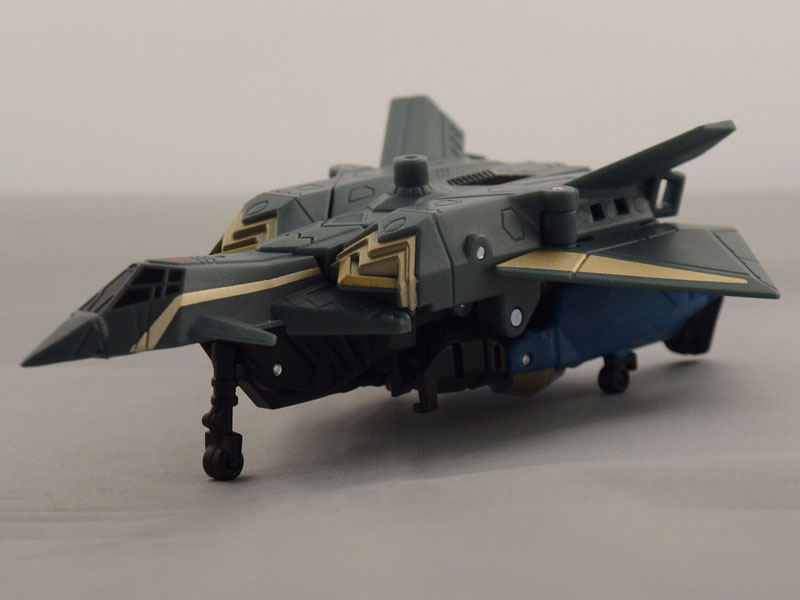 Skyburst transforms into a supersonic jet. He retains the gray paint job and the gold accents, as well as having a large Minicon port on his fuselage. He has retractable 3pt landing gear, 1 in the nose and two on the legs. 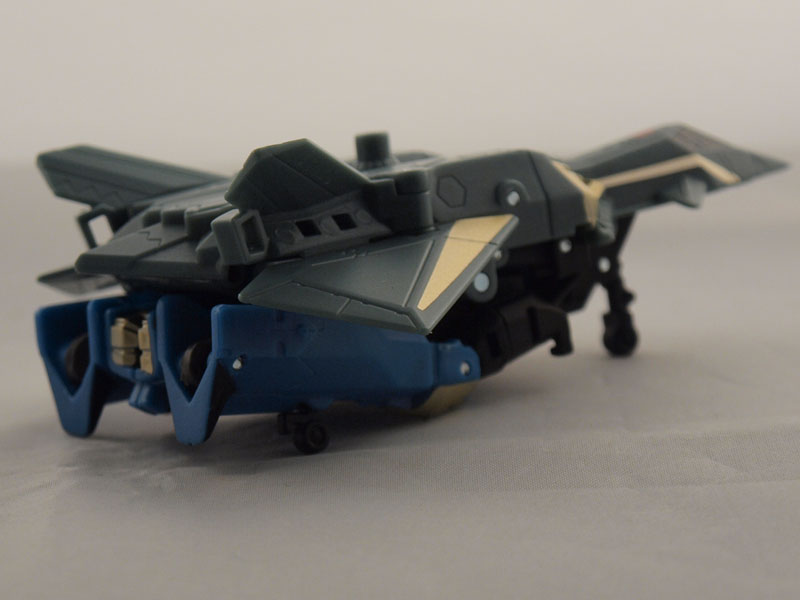 The top of the jet looks nice, but the bottom is a different story. Again, this has the feel to me of a Minicon rather than a Scout. Perhaps I ask too much.

Like Bombshock, Skyburst comes with 4 drones with no robot modes. They are an assault helicopter, a figher jet, a radar reconnaissance jet and a rescue helicopter. Even with the drones you're almost left with a feeling of a lackluster effort being put out. The drone designs don't flow as smoothly as they did with the Combaticons. They do merge with Skyburst (or any other Commander) to form the Combiner mode.

Rotate Skyburst's legs out 90 degrees. Bend the hips out 45 degrees, the bend the knees in 45 degrees. Flip out the blue tabs behind his legs. Pull the back assembly from the waist as you did when converting him to alt mode, but only lift the back up 90 degrees. Bend the arms in 180 degrees to they fold on themselves. Flip down the small panel on the front of his fuselage to cover his Commander mode head. Peel open the trap door on this fuselage to expose the Combiner mode head. Fold the back panel back down, but leave the rear stabilizers up. Fold the stabilizers 180 degrees so they face front. Tuck the forearms around the chest to finish forming the chest armor. 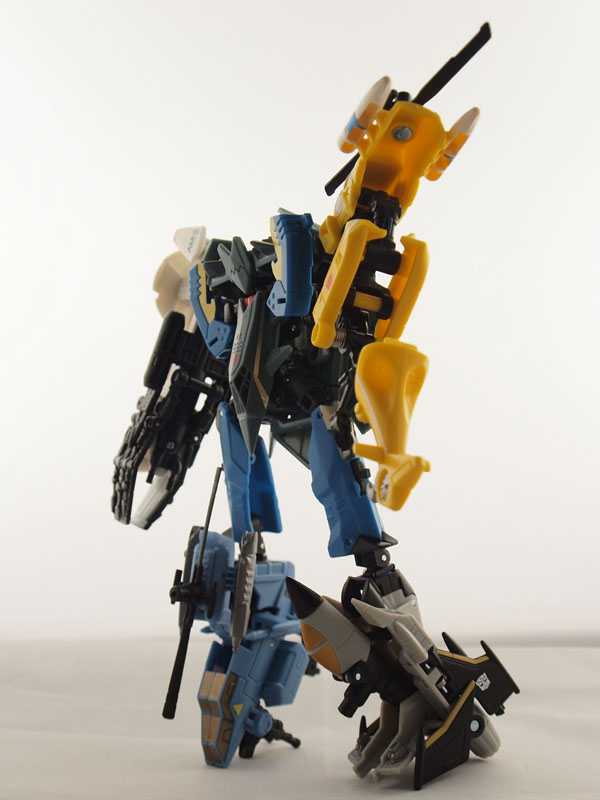 Note: I realize the combiner mode is not properly transformed. This does not affect the end result. Corrected photos will be taken later in the week and reposted. My apologies for the error -BW- 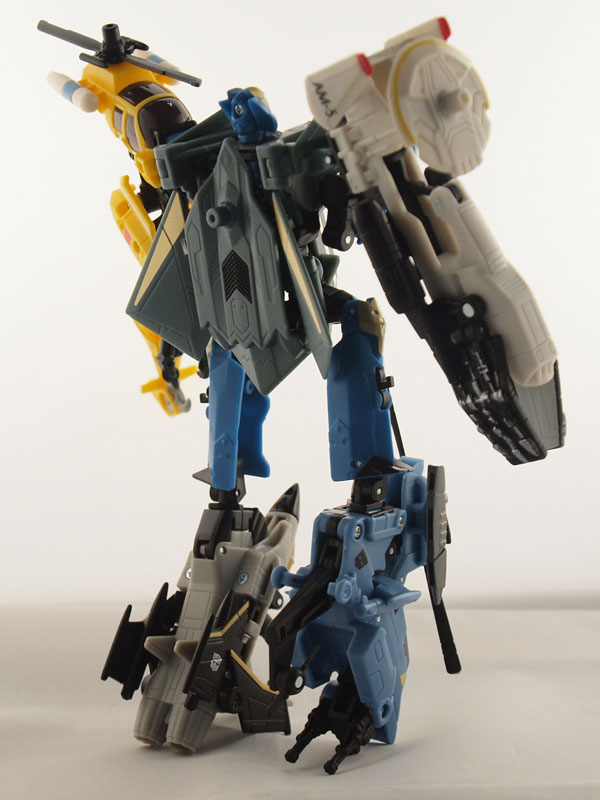 Again, the curse is with the actual drones. The legs are once again the weak point. The blue leg module in particular doesn't give hardly and footprint, making the whole figure rather unstable. Add to that the annoyance of the wings on the other leg module never holding and popping out of place.

Bordering on Minicon quality instead of Scout quality.
Combiner Mode:

Leg stability can be an issue.
Overall:

If you need a battle for Bombshock, you can get Skyburst. Otherwise, there's plenty of other good PCCs out there.