Now that we have the Combiner 5 packs out of the way, we can explore the other side of the Power Core Combiner lineup: The 2 packs. Instead of drones, the Commander figure inside is packed with a minicon that has multiple ways of interacting with his commander. We start with Smolder.

No one holds a grudge like SMOLDER. He plots elaborate revenge against his hundreds of enemies, and thanks to his combination with CHOPSTER, he’s got the power to see each of them through. 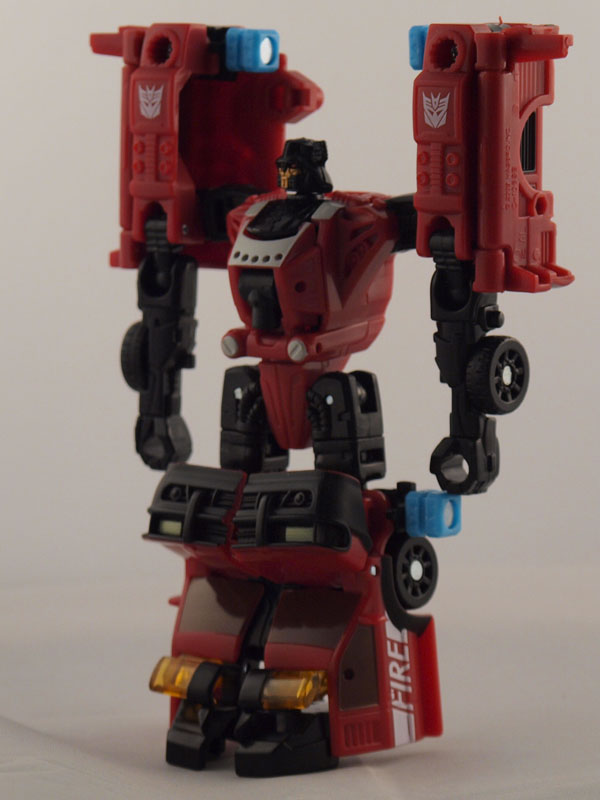 Smolder is all red, with black upper limbs and head. He features a Minicon port in his chest that can be revealed by flipping it up. This is so he can interact with his partner, Chopster. 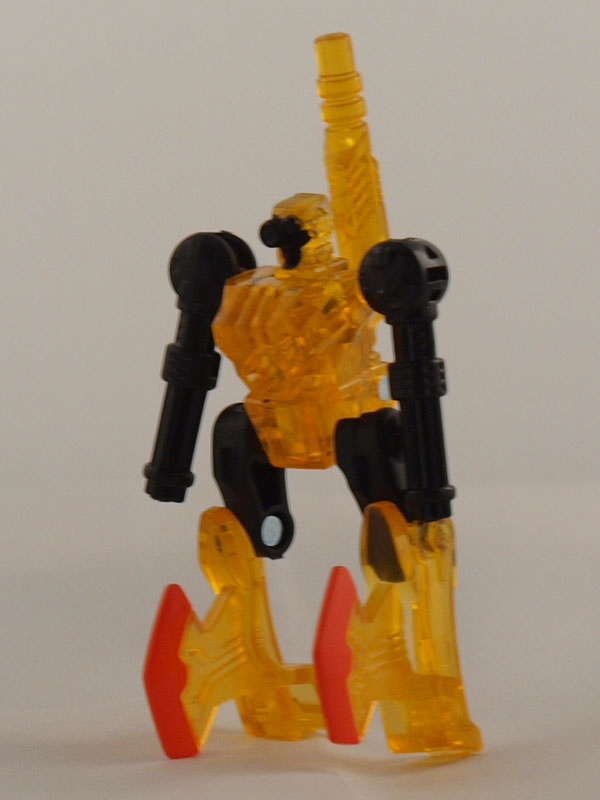 Chopster is a translucent gold, with black limbs. He might look a bit silly, but he comes with multiple uses. 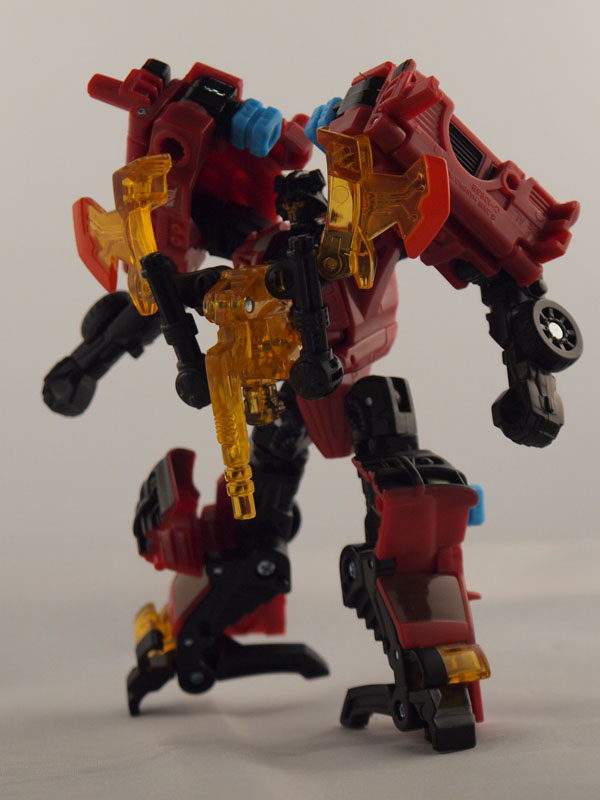 Spread out his legs, turn the feet up and fold down the shins and Chopster bonds with the Minicon port on Smolder's chest to form power up armor... Breastforce style. As a bonus, you can point the arms down and the handle up to give him three chest mounted cannons. 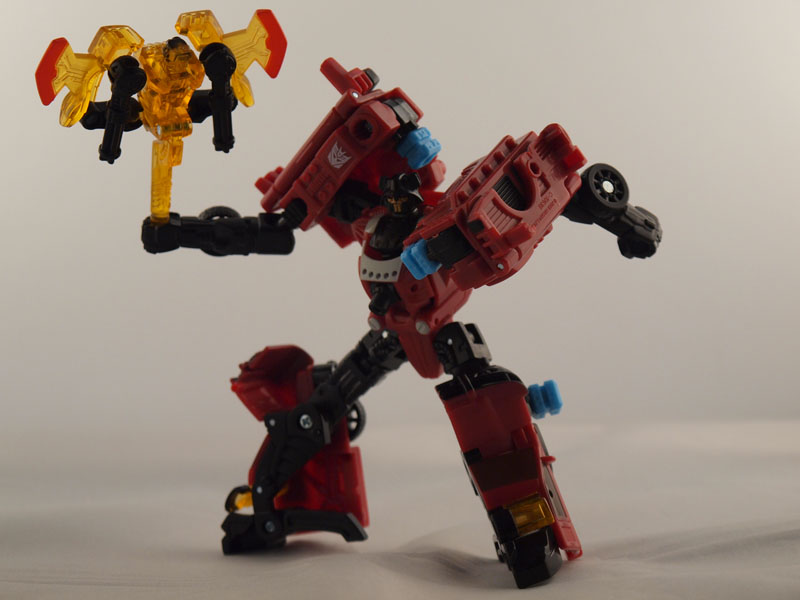 Conversely, if you fold the legs up, point the blades down, fold down the handle and bend the knees, Chopster becomes a battle axe for Smolder to use. Chopster also has a 4th mode we'll review later.


The lack of a rotating waist is the only small niggle with this figure.

Pull out the arms so that the elbows bend at the pin hinge. Fold the fenders out from the shoulder plating. Fold the forearm into the fender. Peg both legs together and fold in the feet. Fold the legs in 180 degrees. Fold in the blue tabs and close the front end over them. Fold down the lightbar. Push in and forward on the shoulder plates until they merge to form the rear. 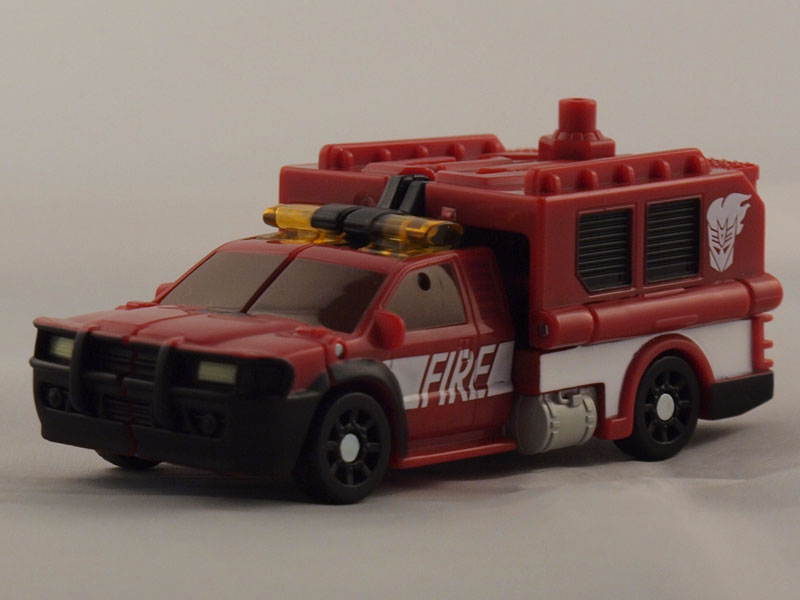 You could hardly tell Smolder was a Decepticon until you see the flaming faction insignia on the rear deck. Who would think a 'Con was a fire paramedic's truck right? There's plenty of molded detailing, including the brushbar on the grille and the yellow translucent lightbar on the roof. 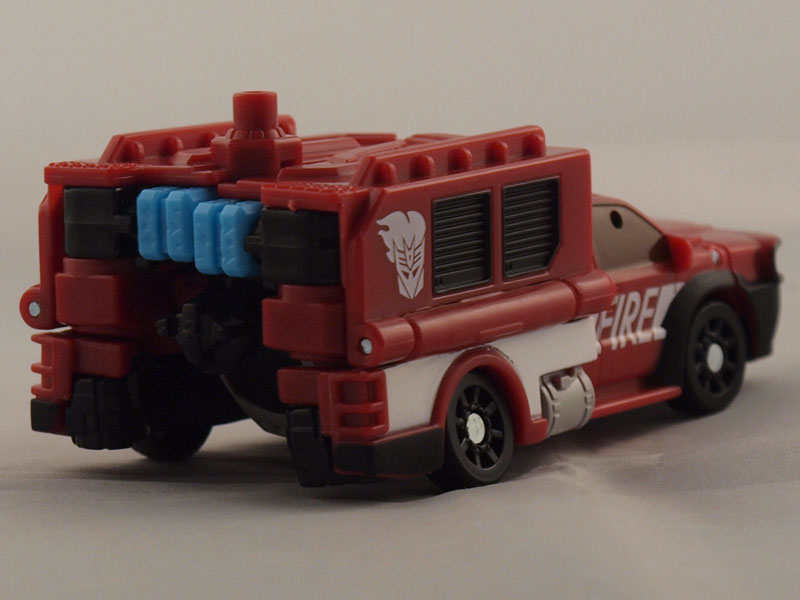 The only thing that might get you is the very rear. It's an open back, exposing the head and that tends to bother some people (myself included). 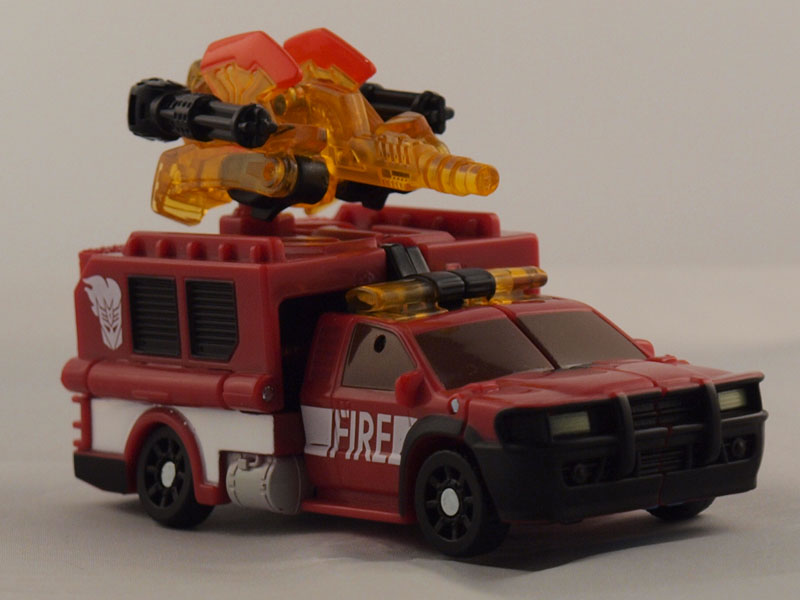 Back to Chopster. From robot mode, Fold his legs completely back, fold out the handle and you now have a cannon arrangement to mount on Smolder's roof. A Breastmaster, a Targetmaster and a hand weapon all in one. What more could you want?

Another bonus with the 2-pack Commanders is that they also have a combiner mode. For Smolder, start by folding out the blue tabs on his shoulders. Bend the arms at the ball joints then rotate the shoulder assembly 180 degrees so the arms are facing back. Lift up on the shoulder plates so that the blue tabs are now pointing outward at the sides. Fold the arms onto his back, noting the tabs that fit into the pegs. Rotate his legs inward 90 degrees so the wheels face out. Bend the knees so the blue tabs face the bottom. Position the tabs downward. Pull down on his chest and push back on the Commander head so that the Combiner head shows. Mount drones as desired. 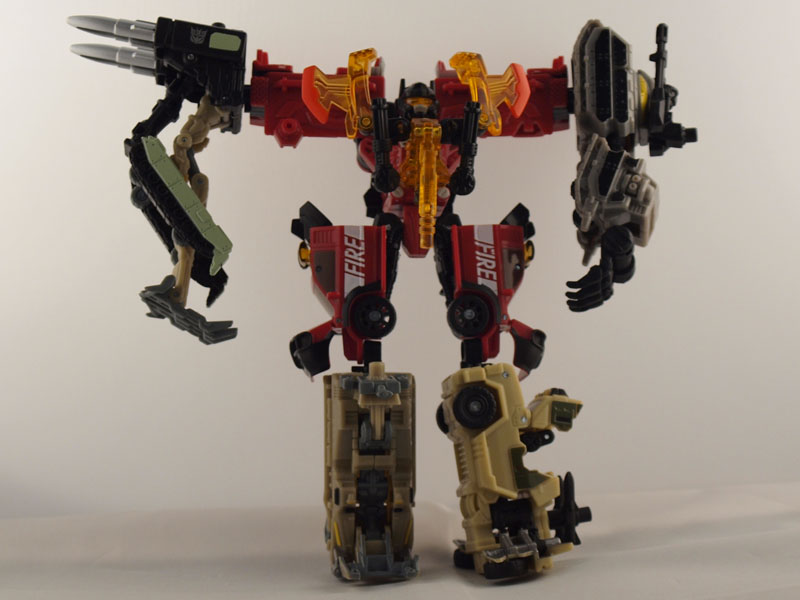 Smolder makes a good combiner body. As one board member pointed out, you can even cheat a bit with him, using his shoulder plates as an arm and using the drone ports as elbows. In that respect, he makes the best combiner body thus far. In case you needed another bonus, you can use Chopster's armor mode on Smolder even in Combiner mode.

Lots of poseability and great uses with his Minicon partner.
Alt Mode:

You can get poseability out of him with the drones that you simply can't with the other commanders.
Overall:

If there's any one PCC figure you shouldn't pass up on... it's this one.