It's nice to see lately that Hasbro has been resurrecting some of the older names in the TF universe. Take Huffer, for instance. Largely absent since the G1 days (with a BotCon reference thrown in somewhere), he finally makes it to the limelight once again. This time, he packs a partner named Caliburst.

With Caliburst by his side, Huffer is just as inclined to grumble as he’s ever been, but he’s also faster, stronger, and smarter, which means the Decepticons have a lot more to complain about than he does. 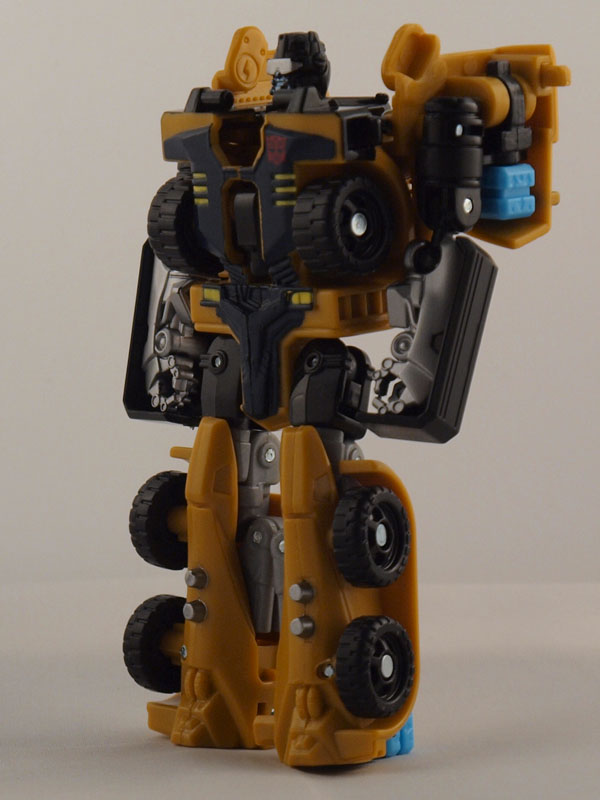 Huffer has kept his G1 paint scheme of mustard yellow and navy blue, with silver forearms. Overall the detailing in robot mode is good. However, the head sculpt doesn't scream Huffer at all. In fact, it's perhaps the most lackluster sculpt of the entire line thus far. 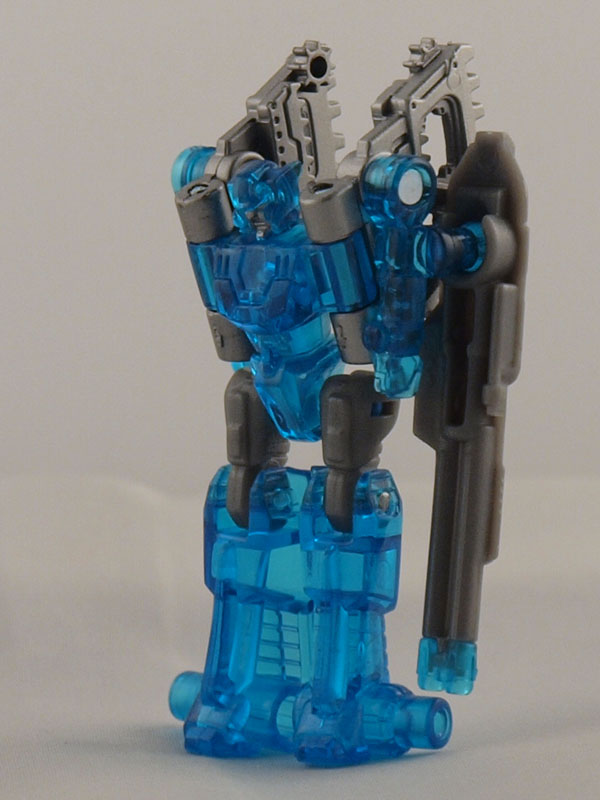 His partner Caliburst is translucent blue with gray and silver He packs a mean left arm that contains a long 2 barrel blaster. 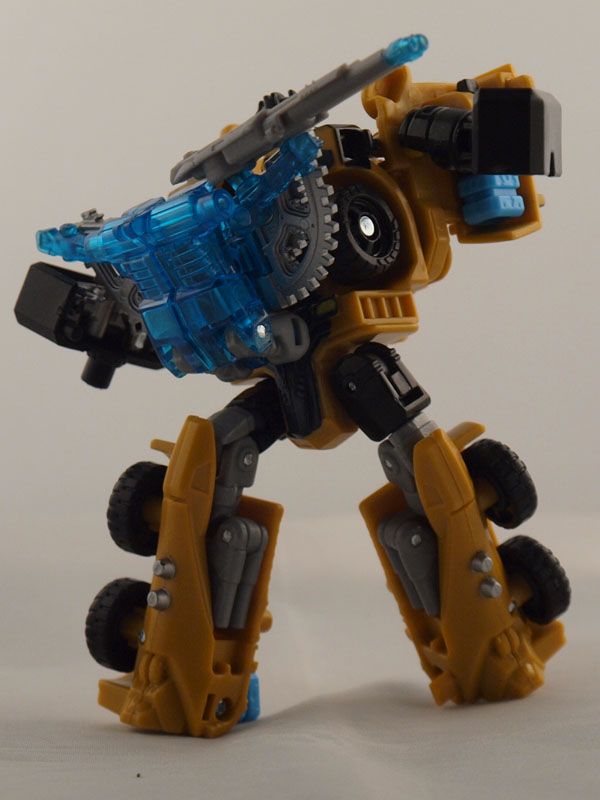 Pull out his shoulders so the gears spread out, spread the arms and fold his legs up around his chest to form the armor mode. The gun looks a bit silly pointing out, so you can spin the gun around to lay across his chest orhave it point outward. 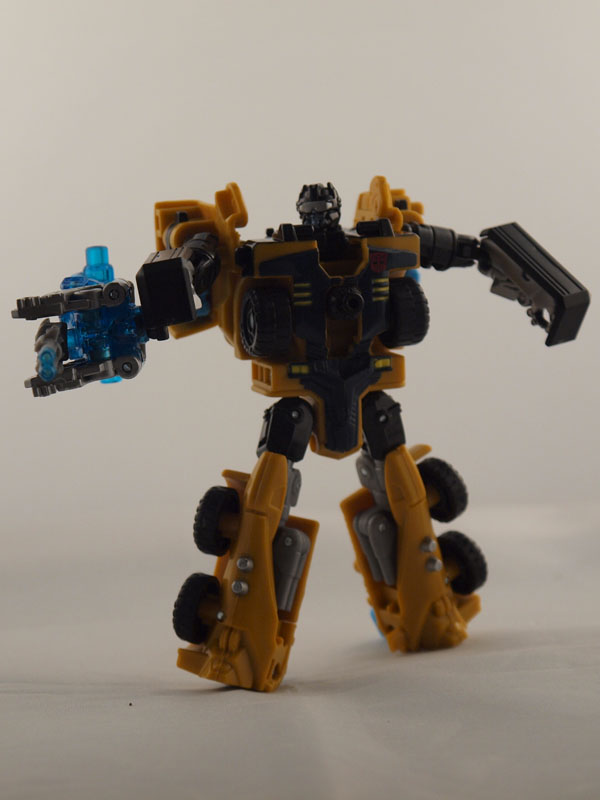 If it's a hand weapon you're after, fold the shoulders out. Then, spread out the left arm so you can spin the gun barrel 180 degrees. Fold it back down,then collapse the shoulders around the chest. Bend the hips forward then the knees down. The rifle pegs to a minicon port under Huffer's right arm.


His footprint is rather small but fortunately the tabs behind his legs keep him stable.

Fold down the head and join the legs together. Rotate the forearms 180 degrees. Raise both arms up 180 degrees. Break away the shoulders from the chest and flip the arms around 180 degrees. There are 2 pegs that will hold the hands in place at the rear. 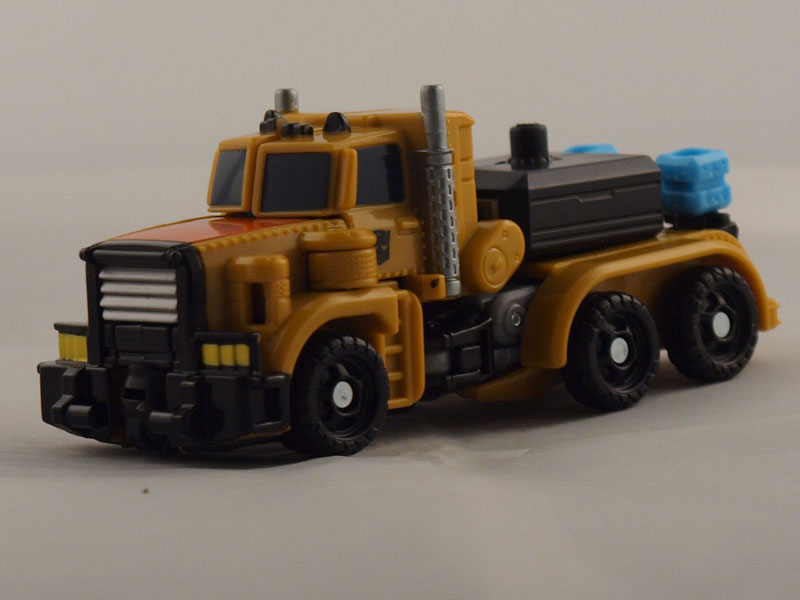 Huffer retains his semi alt mode, although now he has a nose. He also has an orange hood. Overall the truck looks great. Just don't stare too much below the cab, as there's a bit of a gap. 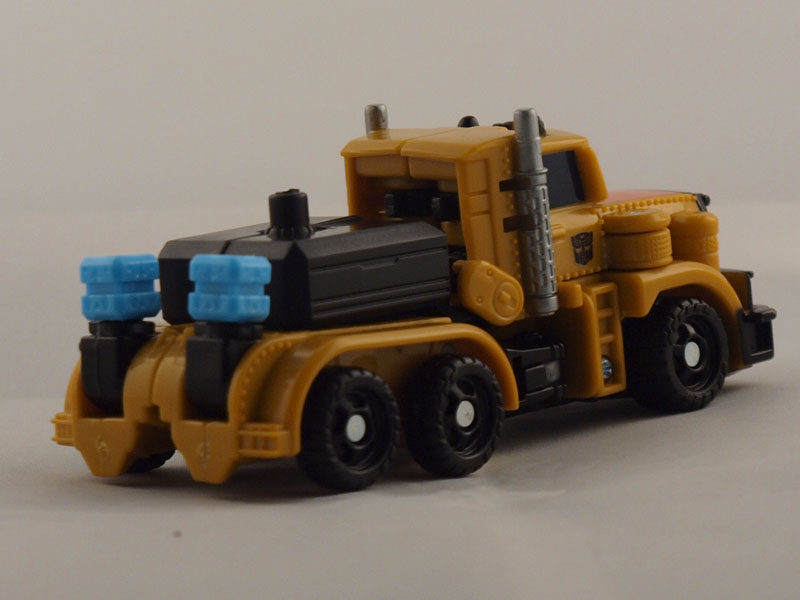 Whether or not the minicon port on the back could eventually double as a fifth wheel for a trailer is anyone's guess. However, that port is home to Caliburst in his fourth mode. 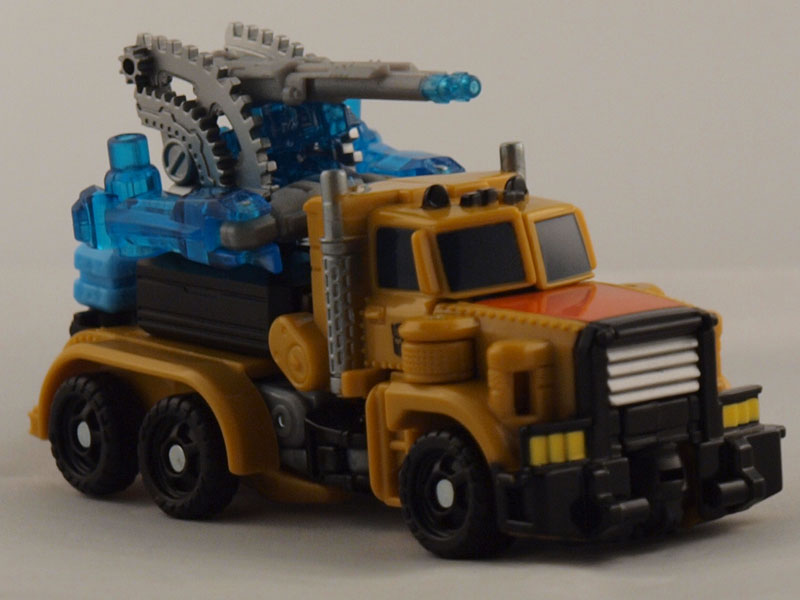 If you still have him in hand weapon mode, simply twist the hips so his legs wrap around the side. Now, you can mount him on the port to be a vehicle mode weapon. You do have some slight angling ability with the barrel to shoot down air targets.

To transform Huffer so he can bond with drones, pull all his blue tabs out. There is one on each shoulder and behind the legs. Bend both elbows 180 degrees. Bend the shoulders at a slight backwards angle, then align the slots on the inside of the forearms to the pegs on the sides of his chest. Pull out each leg slightly. Fold down the Commander head, then peel the back from the top to open a trap door. You'll find the Combiner head inside. Pull it out and close the door so the Combiner head is in place. 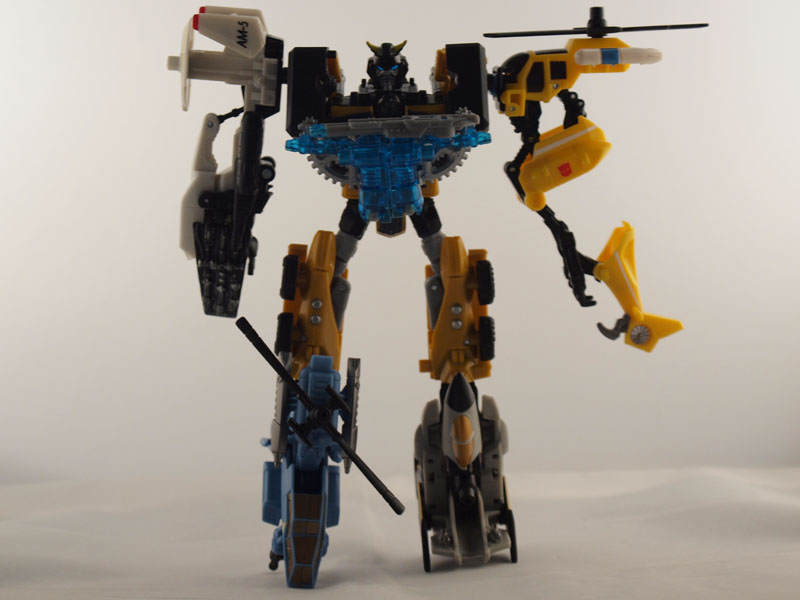 Interestingly enough, Huffer's Combiner mode head looks more like a Decepticon that Smolder's did. In fact, I see traces of Bludgeon in it. At least the eyes are blue and are piped to match. In all, he makes for a good Combiner body, moreso than Skyburst.

Comes off looking slightly awkward in most modes, but still decent.
Combiner Mode:

Makes for a good body, but no hidden articulation.
Overall:

Definitely an improvement over Skyburst. Also a decent figure as a standalone.