Helicopters can sometimes be tough alt modes to translate into robots. Lately, Hasbro has been giving us more variety of whirly birds to choose from. This time around, we get a Scout class figure with a set of blades.

SEARCHLIGHT is the most skilled search and rescue operative the AUTOBOTS® have. His combination with BACKWIND makes him able to operate at full effectiveness for even longer, making him invaluable in recovery operations. 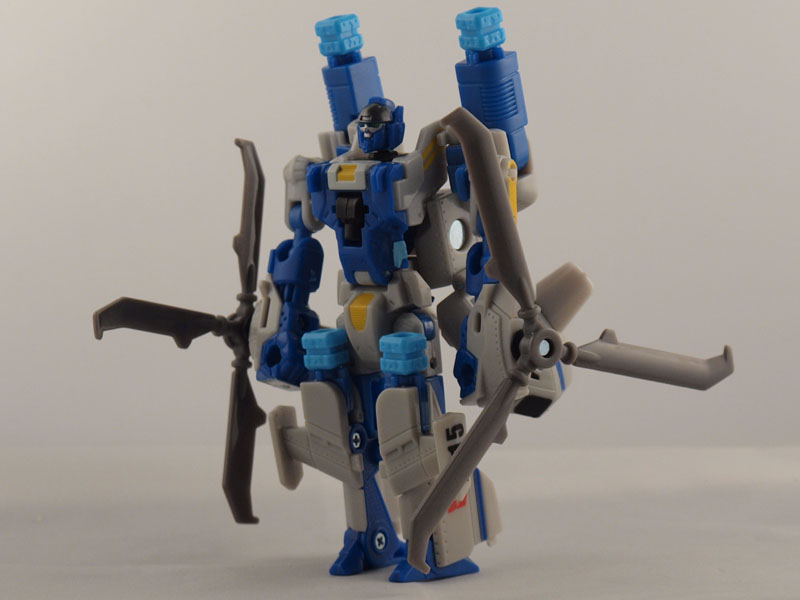 Searchlight is perhaps one of the best Commander modes of the line thus far. He sports a royal blue chest and arms, with light gray legs and sky blue accents throughout. The head sculpt has nice detailing for such a small size.. 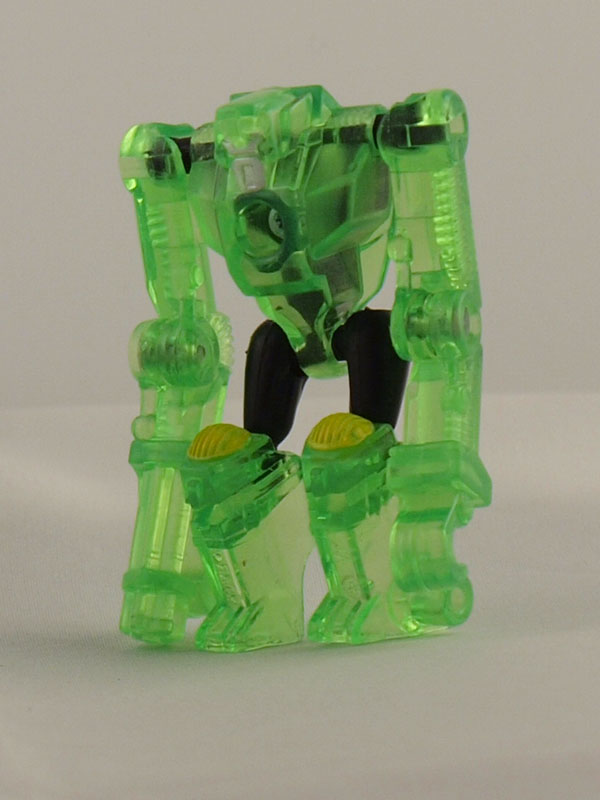 Although the rotors on each arm give him ample close combat ability, he can also call on his partner Backwind to provide some extra help. Although gangly in the arm department, he has a full round of joints for great poseability. 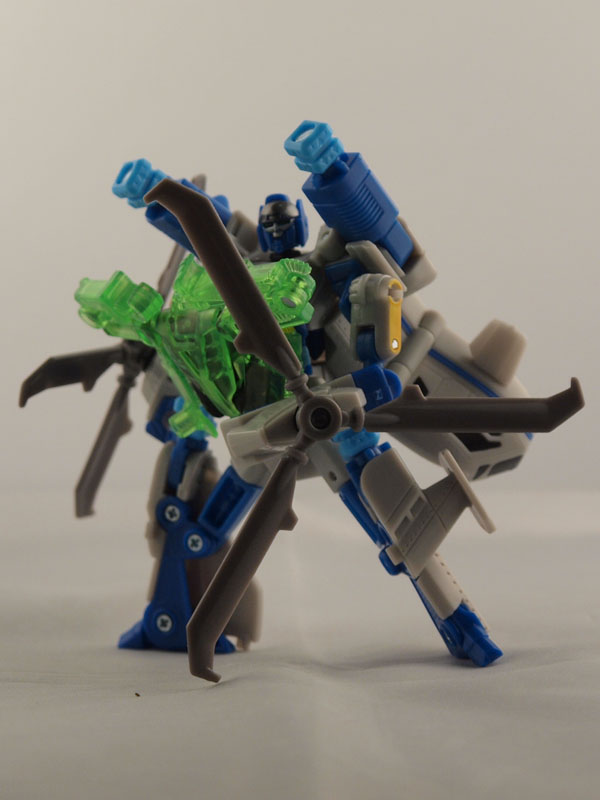 Spread out and twist the arms so the hooks point down. Fold each elbow completely 180 degrees. Rotate the hips 180 degrees, bend the legs toward the chest and bend the knees. You now have Breastforce armor. 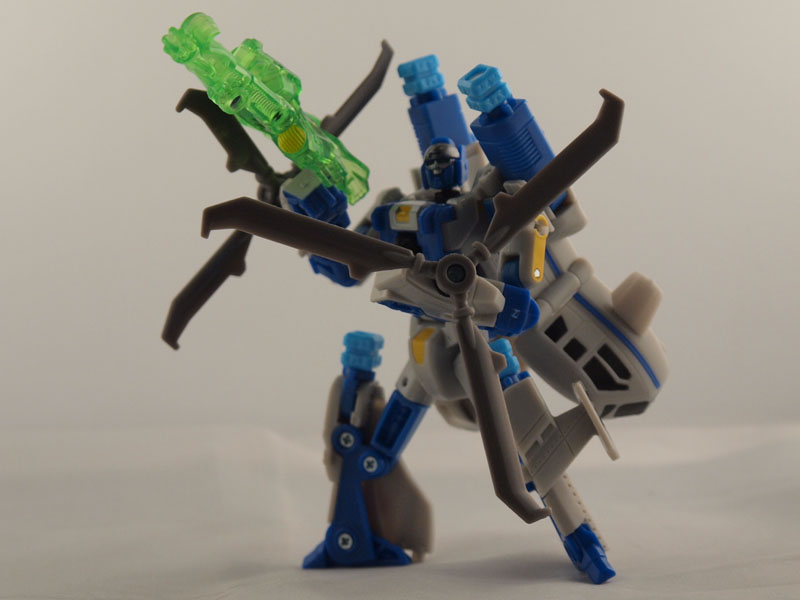 You can also convert him to a hand weapon. Aim the right arm straight up. Fold the right leg as if you were going to create his armor mode. Twist the left knee outward and collapse the lower leg onto his right leg. There's a peg behind his right foot that connects to the fist. Rather goofy looking, but it works.


The hips are interesting. They seem like they're commonly jointed but they're not. You just have to hold onto one leg to pose the other independently.

Searchlight is refreshingly complicated for a scout class figure. Start by taking off both rotors. Fold the feet up into the legs. Bend both knees back completely. Spread the arms to the side and rotate the chest sides 180 degrees. Pull the right arm down and in, then kink the elbow slightly. It will fit between the legs. Attach the tabs on the legs to the slots on the arm to complete the rear assembly. Pull the left arm up and in, then kink the elbow slightly. Fold the cockpit around the arm to form the front assembly. The 4 blade rotor attaches up front, while the 3 blade rotor attaches to the rear. 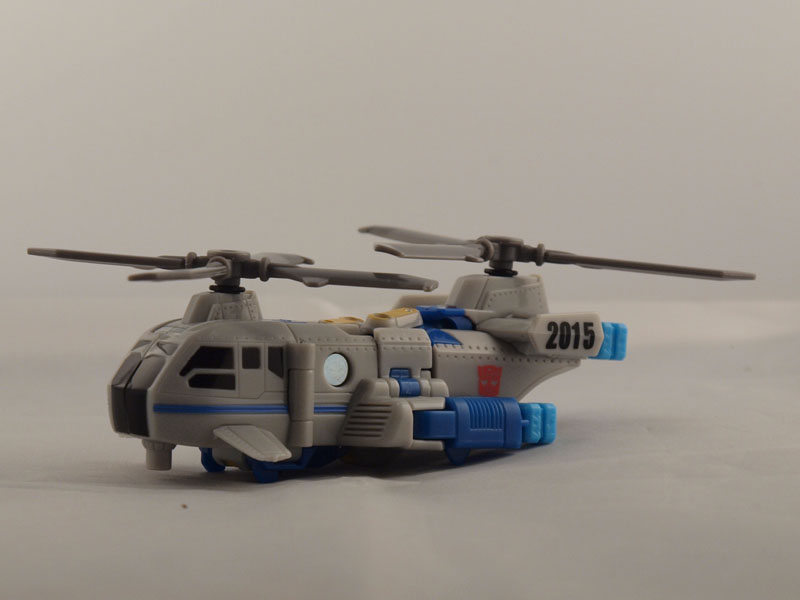 The resulting alt mode is a Chinook style twin rotor helicopter, the first I'm aware of in the TF universe (correct me if I'm wrong... and you will). Though the longer tabs on the side didn't serve much use in robot mode (if they bent forward you could have made nice shoulder cannons), they look like effective jet thrusters. Same goes for the ports on the rear stabilizers. 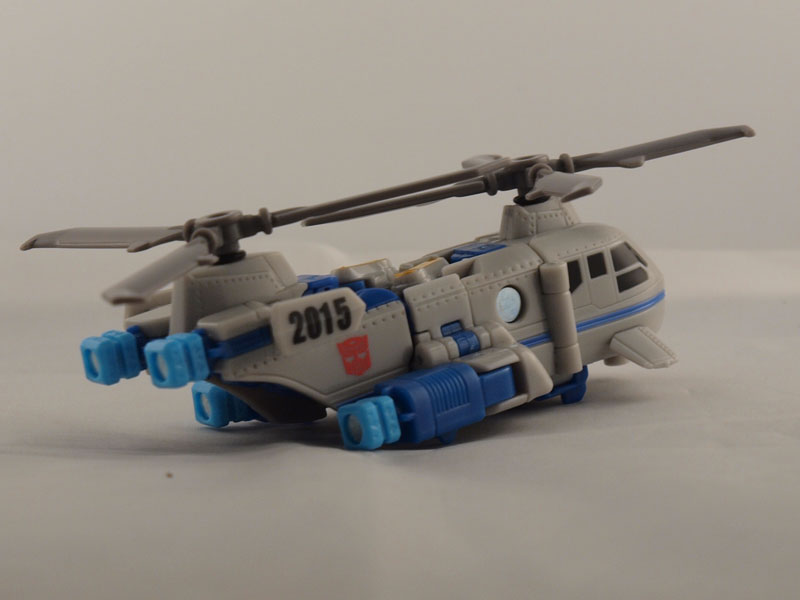 Overall, it's a refreshing design. The top clutters up a bit due to the exposed arms, but you tend to block it out. The only real complaint is a lack of landing gear... there's not even a sled to land on. 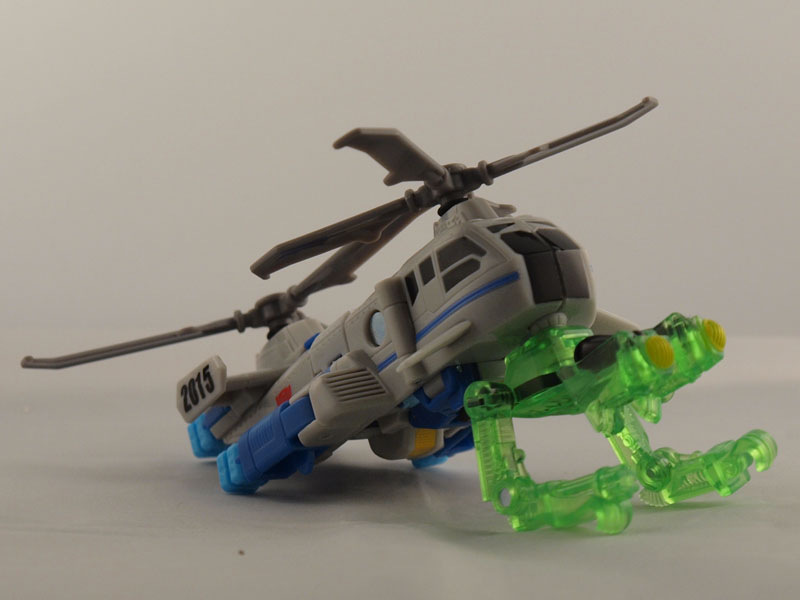 If you have Backwind in robot mode, simply fold his knees all the way back, bend his shoulders so his arms are behind him and bend the elbows down. You now have a pair of searchlights and a pair of hooks to compliment the search & rescue package.

To convert to Combiner mode, fold down the tabs on his back so they're on his sides. Pull down his chest. Rotate the Commander head around to expose the Combiner head. Fold out the winglets and close the chest back up. Position his forearms behind his back. Rotate the legs inward so that the rear stabilizers face forward. Bend the knees until the tabs are at the bottom Insert desired drones. 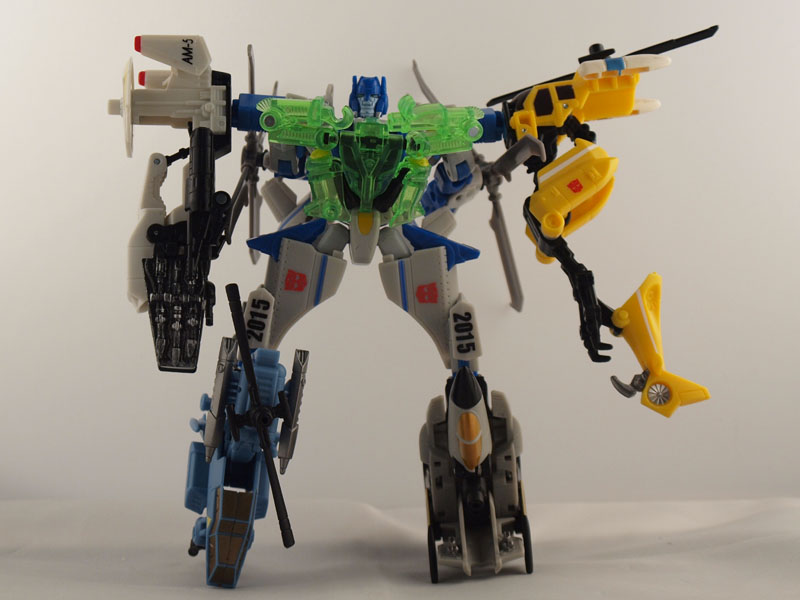 In another lifetime, I would almost consider Searchlight's Combiner mode to be a ringer for Ultra Magnus. The head sculpt in particular draws resemblance to TF:A Magnus. Yet another good combiner chest design. Too bad the drones thus far drag it down.

Keeps the Scout class looking good, although the drone link tabs stick out like a sore thumb
Alt Mode:

Great execution, except when looking from the top
Bckwind:

Lots of articulation and usability, but a sucky hand weapon
Combiner Mode:

Hasbro needs some better drones so these 2 packs don't go to waste. Even without the combiner mode, Searchlight is a great add.