There's been several hovercraft molds done in the last 10yrs, but none of them have been named after the original G1 figure. Fans have hoped that Hasbro could come around and do a repaint, but to no success. Well, you can rejoice now. Seaspray has returned, and he's gotten a size upgrade to boot.

Many Decepticons believe that while the Autobots may rule the land, the sea is safe. Those Decepticons have never met Seaspray. Crankstart thinks he's safe hidden on a remote African shore, but he's about to get the worst shock of his life. Seaspray will come screaming out of the surf, turning the beach into a blasted wasteland with nowhere to hide. 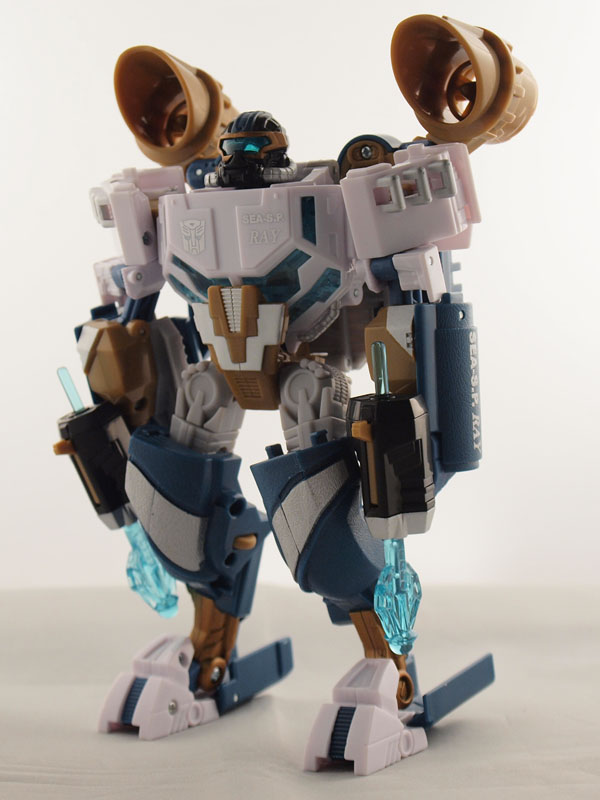 Seaspray is a mixture of seafaring colors, including khaki, navy blue and white. The head mold looks like he's all prepared for underwater operations. The visor is jeweled in blue, but is not piped. Anyone ever watch Ed, Edd and Eddy on Cartoon Network? Remember Ed, the lummox who had a fascination with chickens? I think he grew up and went to work for Hasbro as a figure designer for the ROTF line. I'm not sure about the rest of you, but this 'chicken leg' getup is getting a bit old. 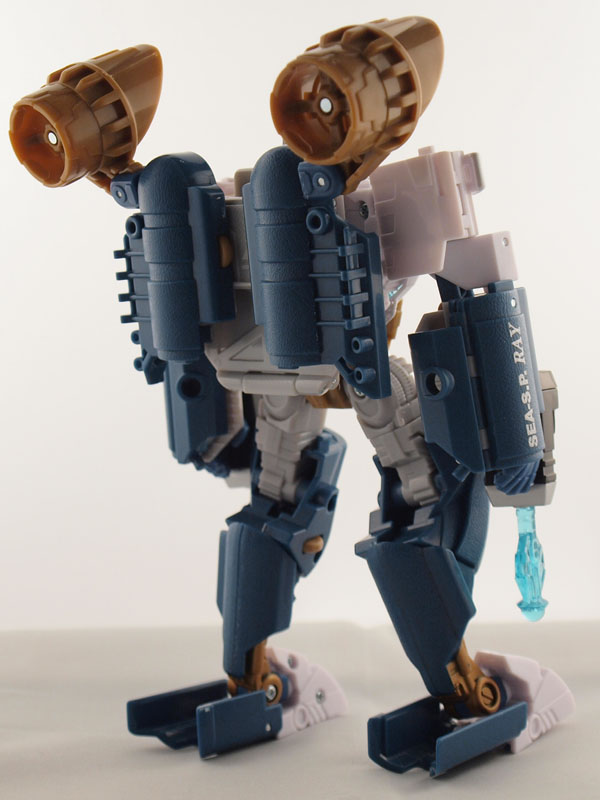 Seaspray has a pair of launchable harpoon missiles. The launcher can either peg behind his forearms, or you can peg them to each hand. The hands are open, but the palms are molded just right to firmly grasp the launchers. The engines for the hovercraft can either lay on the shoulder, or if you want to explore the underseas in robot mode, can be pointed with his back. To add in the visual aid, you can expose a pair of flippers under his feet. 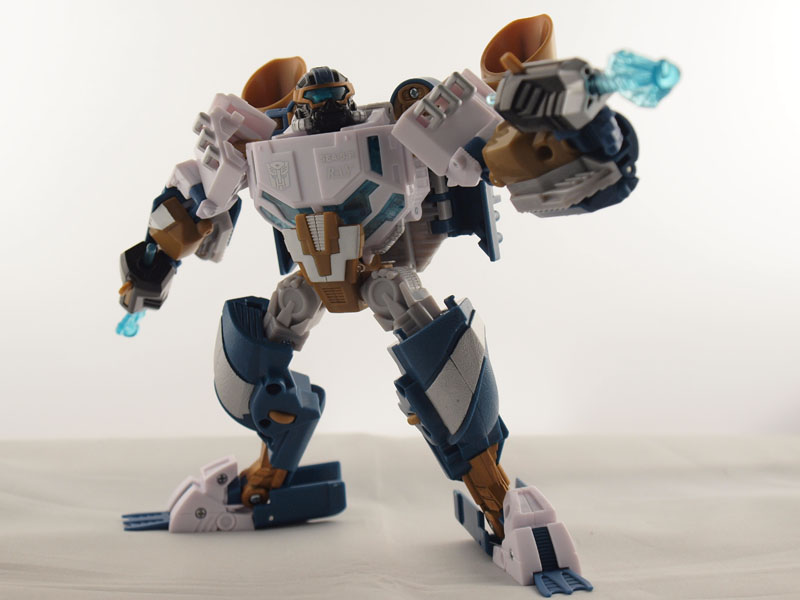 
The joints are there, but are severely limited. There is a catch on the hips that prevents full spread. The backpack prevents full shoulder rotation. With some moderate mod work, you could open up the articulation more.

Twist the knees so that the feet end up pointing up on his backside. Fold the haunches on his feet into the legs. Spread out the legs, then twist the knees 90 degrees out so this feet touch. Fold in the waistplate. While doing this, rotate the hip joints 180 degrees, then the knees 180 degrees. Push the legs in and conform to the sides of the rear to finish. 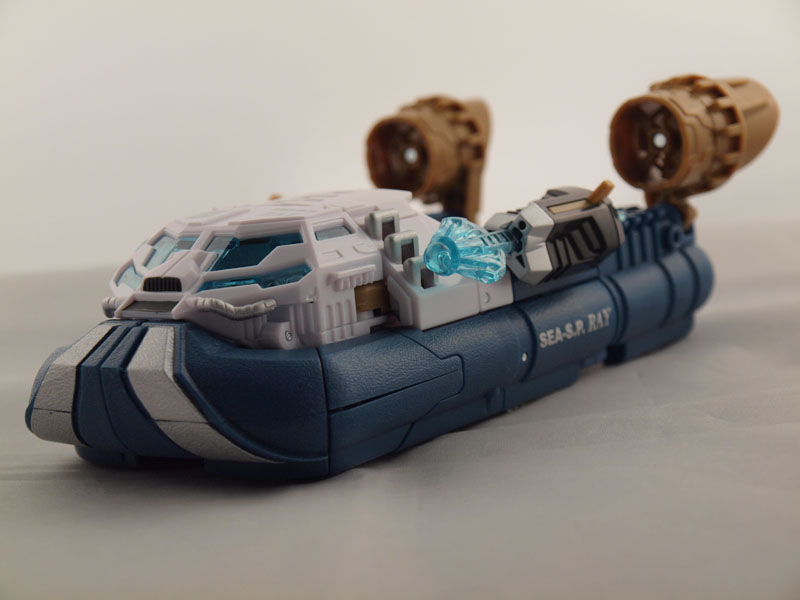 The end result is a transport hovercraft. The bulk of the lower assembly is navy blue, while the cockpit is white. Translucent blue windows adorn the cockpit. SEA.S.P. RAY are scripted on the sides. The missile launchers mount to ports on the side. 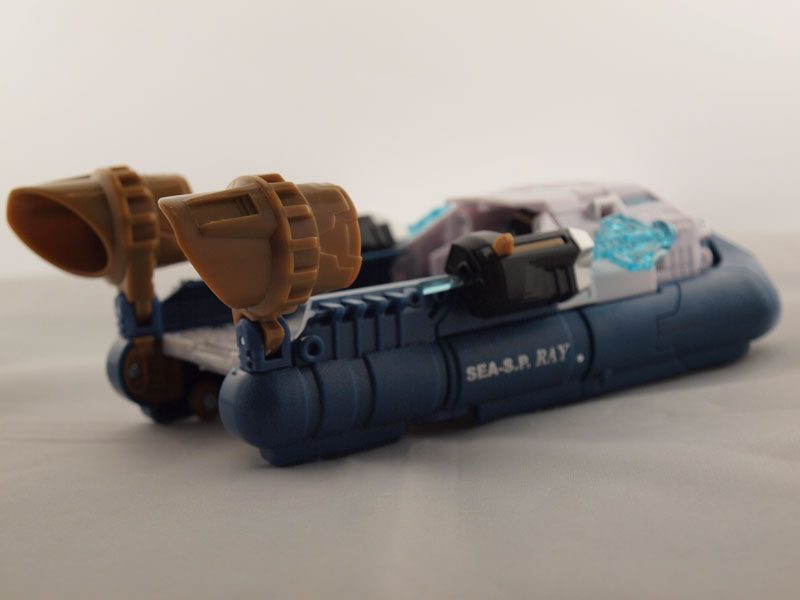 There are 4 small molded wheels on the undercarriage to facilitate movement. However, they are low profile so only do so on a smooth, soft surface. One feature for Seaspray is that he can transport a variety of Scout class figures in his cargo hold. Scattorshot fits (albeit barely) and it's almost a sure bet that the upcoming Breacher figure will tuck in nicely as well.

Nice overall, but a lot of seemingly unnecessary limitation to posing
Alt Mode:

A well laid out and useful alt mode
Overall:

With a little modding on the field, he can be perfect.