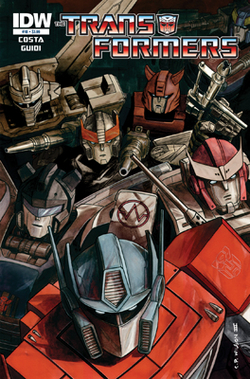 The nine issues of the Transformers Ongoing that we have had so far has done little to dispell the the fear and doubts that our beloved Transformers are in the right hands. There have been many high and low points, but the series has never seemed to pick up steam and move ahead. And it hasn't been, well, fun.

Personally, I have enjoyed the series (mostly due to the art), still recognizing the huge flaws in the Ongoing. But I have always had faith that Costa knows what he is doing, even though as of recent that faith has been waning. But finally, the tenth issue does what the previous nine have failed to do, be fun. After a hum-drum, run of the mill opening that takes itself far too seriously, a fun read lies in wait.

The story goes moves right along with the plot lines that were started in the last issue with the Autobots going on a covert mission to stop and round up the Combaticons who are working for North Korea in exchange for energon. With the ban that the President of the United State put on countries using Cybertronians in military operations, Costa introduces an interesting twist to the Autobots operating procedure. The dialogue is tight and spot on, except for the unnecessary opening. The action was fun and there was plenty of it. The twist at the very end draws off of issue #4 and it will be very interesting to see where it goes.

The art by Guido Guidi was great for the most part with great detailing, even using some of Don's designs for the series, and it is a great improvement over the last issue. But one or two pages stuck out like a sore thumb. They looked rushed, simplistic, and like anyone off the street could have drawn it (think AHM #12). I have no idea how such a talented artist can produce such amazing and terrible work in the same issue! Overall, though, the art is pretty great and adds to a fun and enjoyable issue.

It is my sincerest hope that future issues will follow this one's lead. It dropped much of the over the top seriousness and did what Transformers comics should do...entertain. And if Costa and crew keep it up, they can count on my hard earned money each month.