Monster trucks aren't a subject of many Transformers. Sure, there's been a few here and there (and a whole group of them in the Micromasters line) but thye're mostly background players. Power Core Combiners brings us a new monster truck, but this time he's packing a gang.

There was a time when Mudslinger might have considered joining the Autobots, but that was long ago. He's a robot of action, with no time for things like thinking, negotiating, or peace. in his opinion, the Autobots are a bunch of sissies. With his team in tow he's got the power to prove just how much tougher than them he is. 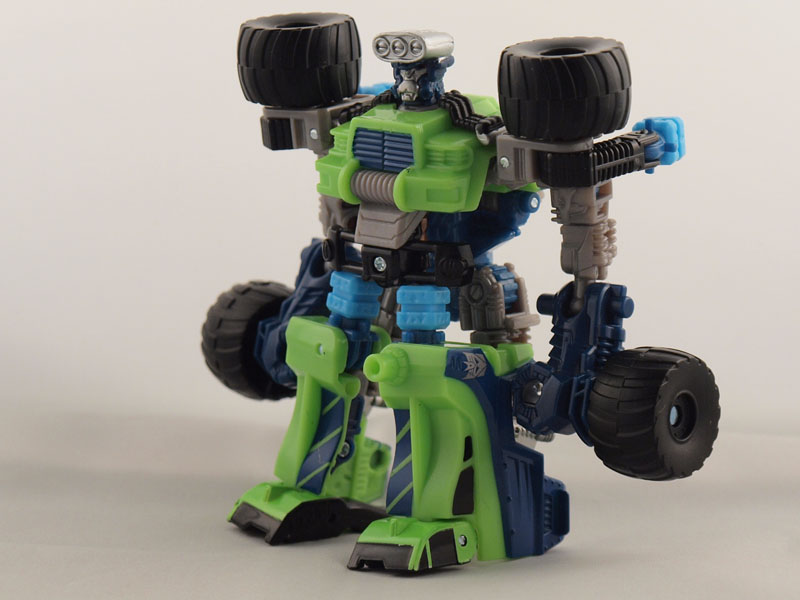 You have to wonder how a bot with no skill or intelligence got to be a commander... ahem. Mudslinger is done up in a bright fluorescent green with navy blue and gray apps. Overall, the look isn't bad if you can overlook the gigantic tires hanging off his arms and shoulders. Even the headsculpt is likeable. 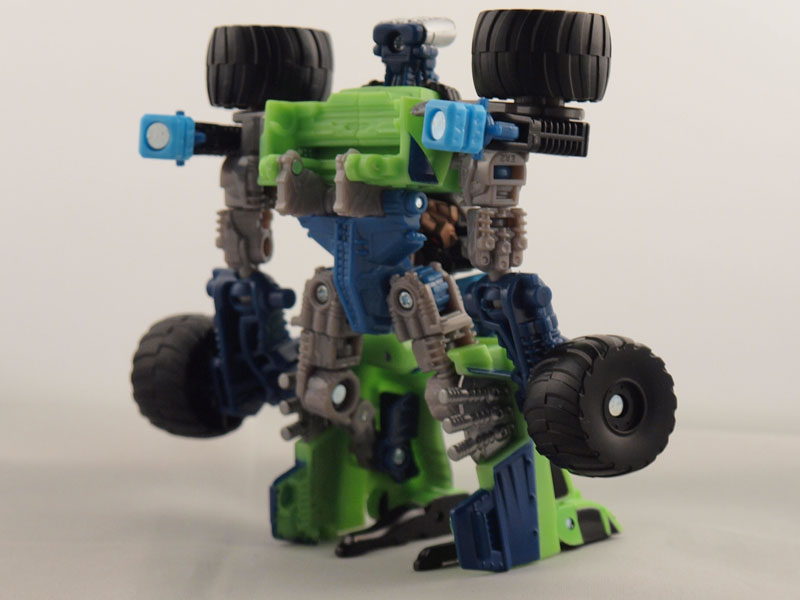 Where this bot fails is in the legs, particularly the knees. I have seen several complaints of the knees and thighs breaking apart. Given the thin support of the peg insert between the knee and thigh, it's believable. I actually cracked a thigh myself, but was fortunate enough to find another Mudslinger relatively quickly. Should you buy one, immediately inspect the legs and keep that receipt!


Careful with the knees, they're fragile. You'll have to reposition the waistplate to get maximum leg rotation. Finally, the design of the ball joint on the shoulder is pretty lame. You can rotate OR spread the shoulders, but you can't do both. This makes arm posing tricky.

Separate the waist from the body and cantilever the legs so that the waist plugs into the back. Push his head down into the hood. Spread out the combiner ports on his arms. Position the shoulders so that all four tires face out the same way. Flip the legs back, then slide the lower legs forward to complete the cab. Be careful of those knees. Fold the shoulders back and join the arms to form the drivetrain. Pull the cab together, making sure that the pegs on the drivetrain recess into holes inside of the cab assembly. Push in the combiner ports on the arms to complete. 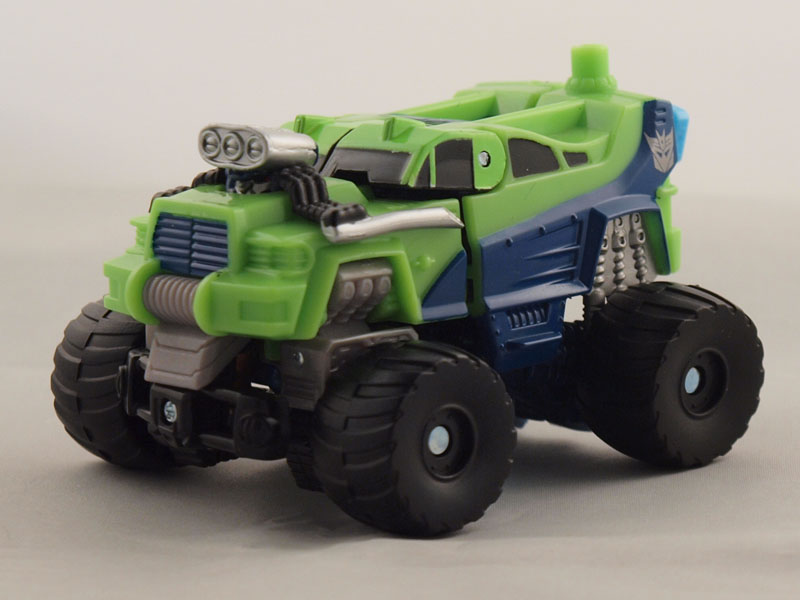 The monster truck look is captured perfectly. You get a ridiculously high ground clearance, along with all the molded accessories you'd expect out of this kind of vehicle. 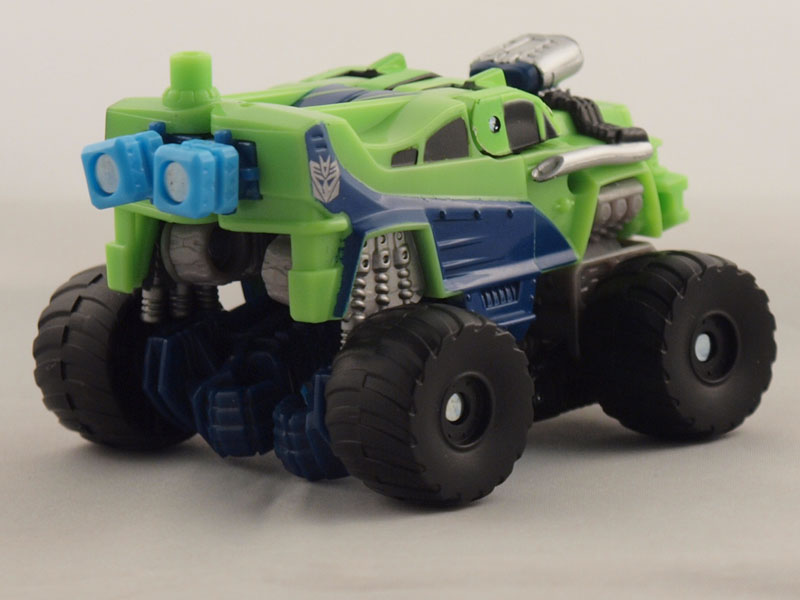 Some may take issue to the combiner ports sticking out of the rear, but think of them as boosters. The only real letdown in alt mode is that the cab halves never really seem to sit right. They either bow out or tend to slightly separate.

Mudslinger features four drones that do not have an individual robot mode, but resemble something out of a Mad Max movie. They are an armored truck with rear mounted boosters, an armored car with a metal plow on it's front bumper, a COE semi truck with a wrecker hook and 4 missiles, and a sand rail complete with full offensive arsenal. Like the other 5 pack drones, they combine with Mudslinger (or any other Commander) to form the Combiner mode.

Push in the commander mode head. Cantilever the leg assembly to the back as if you were gonna transform him into alt mode. Position the arms so that the fists point out to the front tires and the rear tires lay perpendicular. Twist the waistplate to expose the combiner mode head. Fold out the arm combiner ports. Spread out the legs. Flip out the lower legs, then twist them so the cab sides face the front. Bend the knees to that the combiner ports face down. 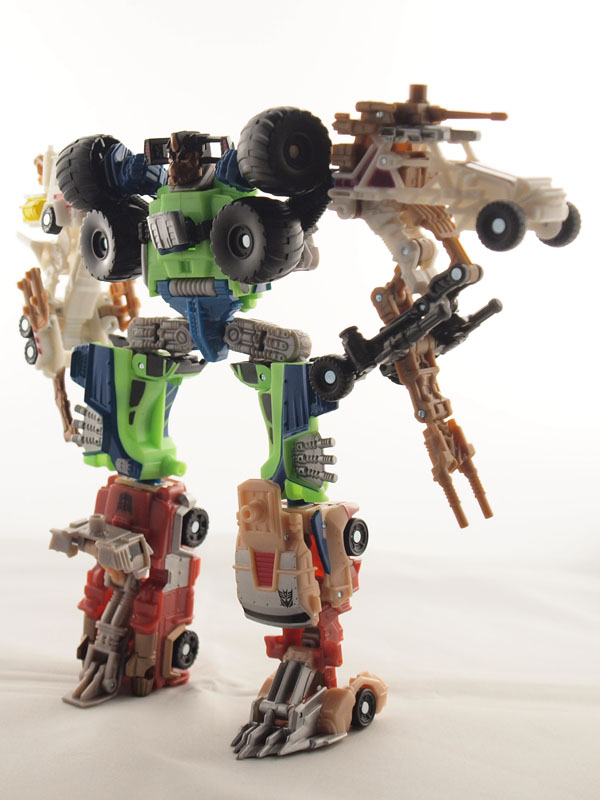 If you're like me, you'll never get over his head looking like a Decepticon Matrix of some sort. Although the arms and legs don't plug solidly into the body, the figure is stable. 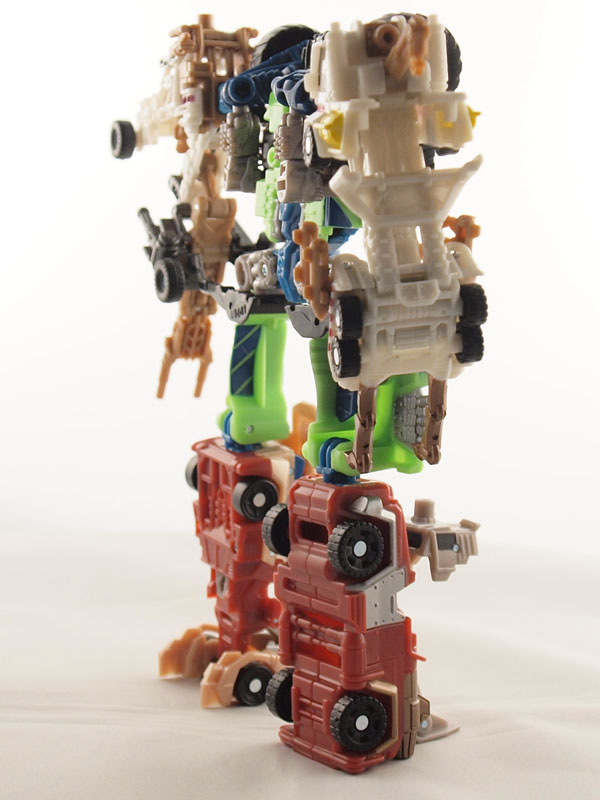 As for the limbs, it's a mixes bag. The arms, particularly the leg, is spindly looking and undeveloped. The left leg module likes to stick, so you might have to work it a bit.

Body is decent, but the limbs could use work
Overall:

A fragile figure that could have been more.