After several years of having Hot Shot around, Hasbro finally gave us Hot Rod back... sort of. Due to the name being taken elsewhere, Hot Rod has since become Rodimus. However, his Classics figure wasn't much of a fitting tribute to the G1 cavalier gone leader. Animated gave Rodimus a go but until now never released a figure. Thanks to Toy's R Us, we get another attempt at the futuristic muscle car.

Rodimus Minor is one of the most promising young robots ever to graduate from the Academy. His trainers were so impressed with him that he was given command of a small unit right after graduation. During the short time he has commanded his troops, he has molded them into a tight-knit force to be reckoned with. Everyone expects him to one day rise to the rank of Magnus, and command Autobot forces across the galaxy. 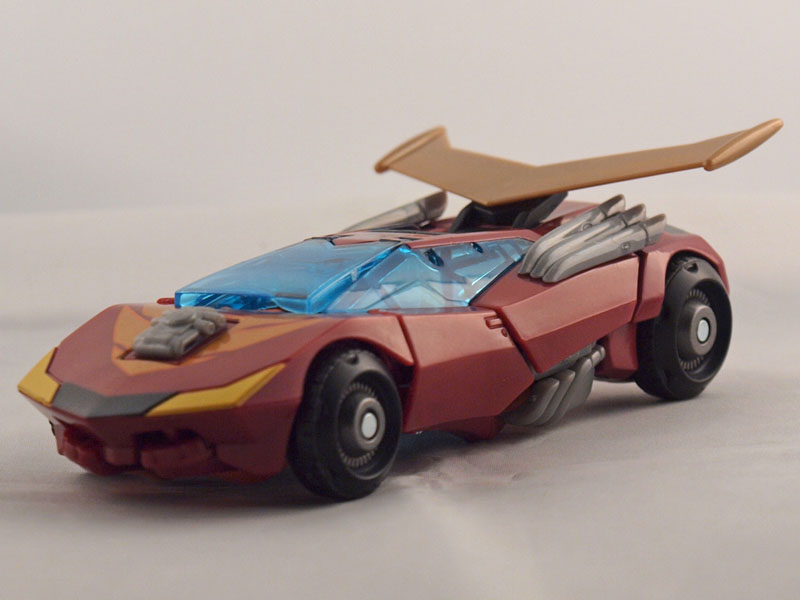 There's one thing you can say about the Rodimus mold, it's always easily recognizable. All the elements that make Rodimus' alt mode are here, including the exposed engine block, the oversized rear wing and the red paint job with the flames on the hood. One difference is that the 6 tailpipes now sweep on top of the quarterpanels. 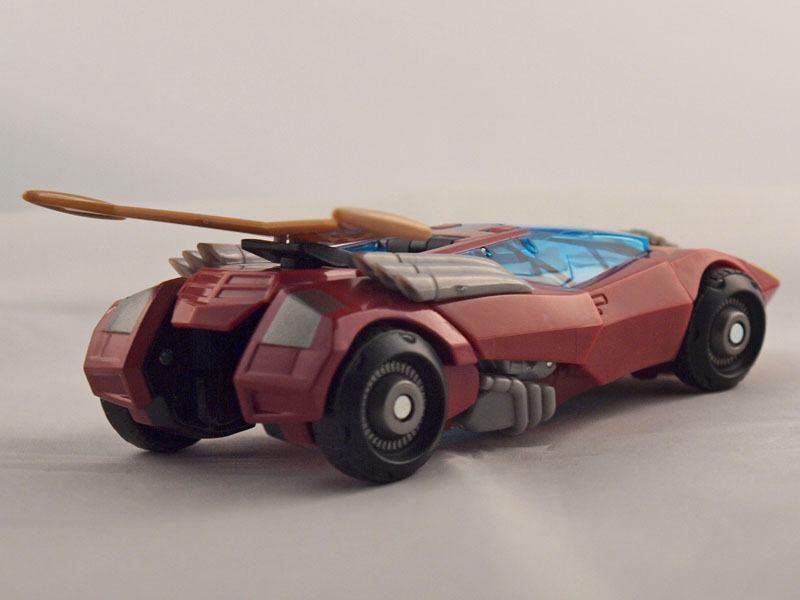 That's not to say the mold is without faults. For one, the head is clearly exposed behind the blue translucent windshield. There's also the curious gaping hole on the rear end. Unlike the Classics figure, there is no weapon that doubles as a tailpipe. Finally, there's his bow weapon. Ideally, there are two slots on the rear glass where the bow mounts to. Unfortunately, the wing spoiler doesn't fully allow the bow to mount with missiles engaged. Which is all the same, he looks better without the attachment anyhow.

I'm not doing this by the book, but I find this method easier. Start by disconnecting the rear quarterpanels and moving them out and forward. Dislodge the front door from the front fender. After doing this, unpeg the feet from under the front end and flip the legs half moon. Rotate the waist 180 degrees. Push in the exhaust pieces on his legs so they flush against his thighs. Push outward on the lower legs to snap them into place. Fold the feet out.

Push down on the engine block to expose a trap door. Spin it around to expose the Autobot insignia. Fold the front wheels into the hood. Open the windshield and then flip the hood down 180 degrees. Close the windshield. Bring the arms in and back so they snap into the chest area. You'll hear a confirming click if done right. Rotate the shoulders 180 degrees so the headlights point up. Collapse the rear end so that the spoiler is behind his head. Pull down on the arms, then rotate them outward 90 degrees so the exhaust is on the sides. Fold out the hands to wrap things up. 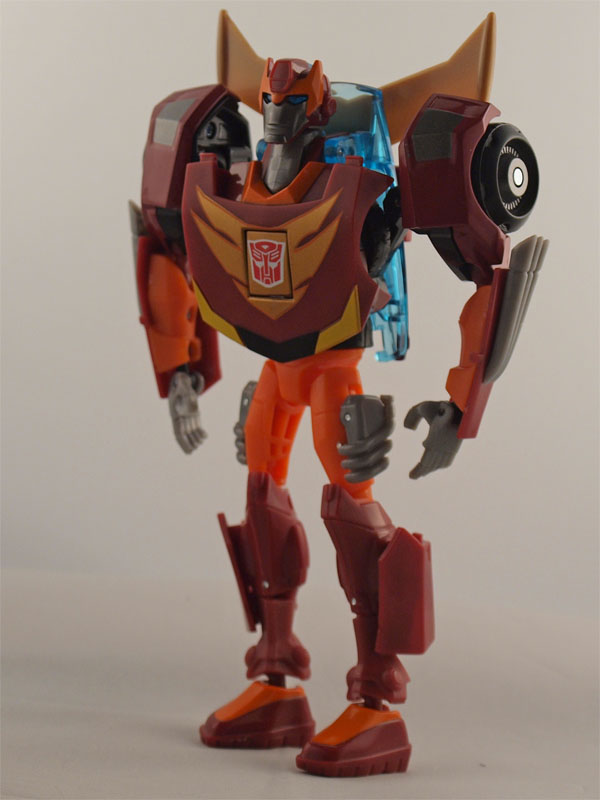 Although the alt mode might not be the best, the robot mode is perhaps THE best Rodimus mold of all time. Again, the figure in robot mode is instantly recognizable as Hot Rod and has all the standard design cues. Although the head sculpt might seem a bit other worldly (even for Cybertron), it comes with blue piping that works well for the eyes. 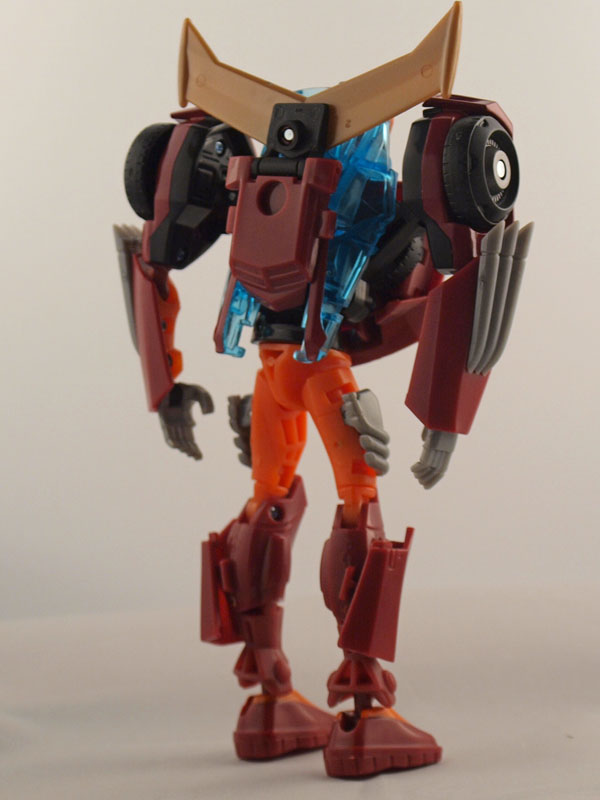 The Energon Bow can clip into either of Rodimus' open style hands. The bow features 2 launchable missiles. With the articulated wrists on Rodimus, there is a decent amount of flexibility for Roddy to wield his weapon. The only hitch is in the shoulders. It's not that they're not well articulated. It's the recessed ball joint with a pin hinge that makes it awkward to pose. There's also the problem with the ball joint popping off on regular occasion. 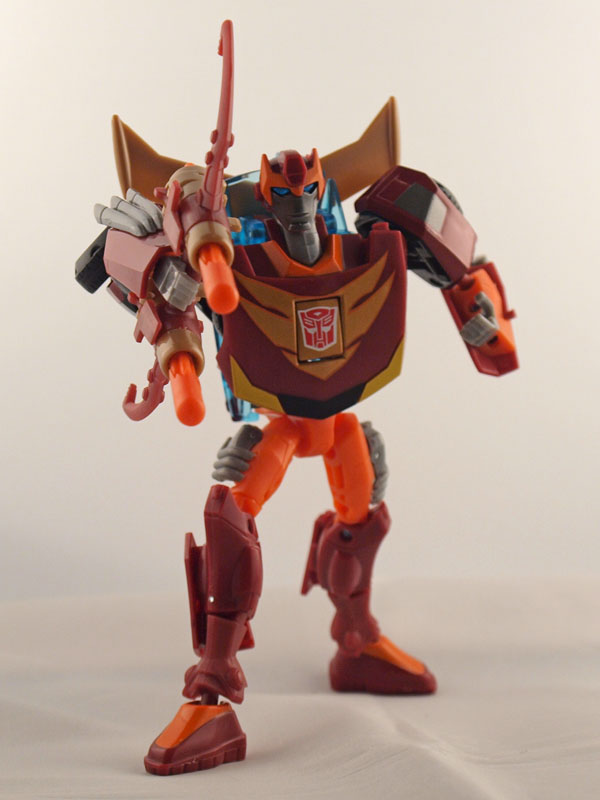 
Mostly well set up for posing, but the arms pop off rather easily.

- Curvaceous but with faults.
Robot Mode:

- Shoulders prevent this from being a 10
Overall:

- It seems with Rodimus that perfection in both modes is something that's just not in the cards.
Class: Deluxe
Price:$12.99, Toys R Us Exclusive