When I open Ongoing I have the distinct image of finding myself at a party where I sit across the room from a person who has found a Rubik's Cube and is attempting to solve the puzzle without having any previous experience but a working knowledge of how to do so. I spend the evening fascinated to see this individual work at solving it and yet completing the cube is elusively out of reach.

Ongoing issue eleven picks up right after ten ended, a heart to heart with the new leader of the Autobots and their television watching ally. This issue shows us what the benched bots are doing, and just how elbow to elbow the humans are working underfoot. The Combaticons easily escaped (more like broke from the Autobots failed attempt to stop them.) last installment and we find them sitting around knocking back energon once more, pleasantries disrupted. The end result is a discovery that more rabble have joined the ranks of robots on this planet. 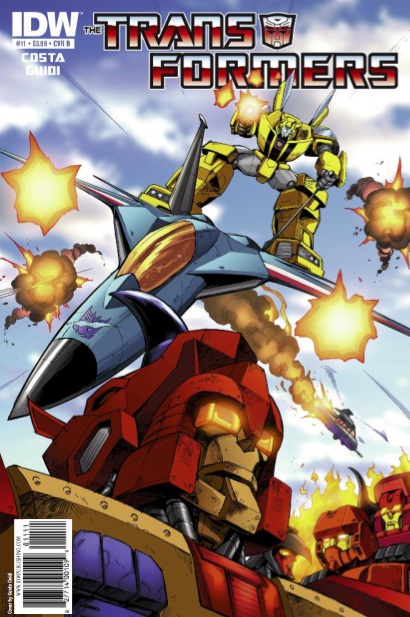 
The art feels more fleshed out in this issue. The details are beautifully there, the inking is great, backgrounds are useful, I really feel Guido has had the time to make this issue really shine. There are a few errors, it is in no way perfect, but it's perfectly wonderful. And I have no crimes to report in the coloring. It's all safe. The only panel that really pops color wise is the last splash page.

The fallout of change Costa has made to the world of IDW Transformers is having its effect on the characters in this issue. It is apparent the shift will continue to prove itself. While it's a great nod to what suggestions have been coming toward the team since this ship launched, I still feel like the anchor is dragging, and the rudder is jarred in only one direction. Clearly the skills to make this tale memorable are there, but the direction feels forced and foundationless. 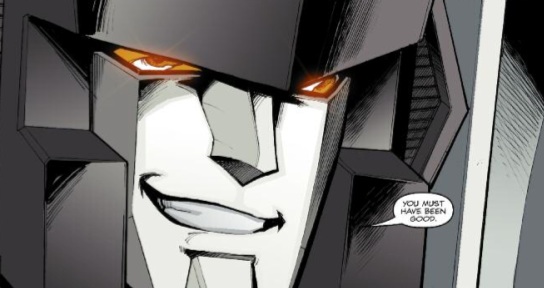 Voted best Ben Affleck impression ever, from a Decepticon. <-- FACT!


My one fear is while I fully believe Costa knows where he is going, I'm not sure his audience has the vision and the attention to see the outcome. Certainly writing is all about illustrating a concept that says something about life and associating the concepts with what you are writing, but it has to be at a level your audience is ready for. The audience is in the same boat as the rest of the economy, life is tough right now. They want to open a transformers comic and be transported to the world of Transformers. Even if it has a bit of predictability, two opposing factions of a dying world fighting not just each other, but to survive. Who will come out on top? Two contrasting powerful leaders, both standing passionate for their own beliefs. The change has to be something clear and concise with all the appropriate twists to grab the audience by the throat and never let go. And that balance has yet to be struck. Nor do I feel like my throat has even been reached for. 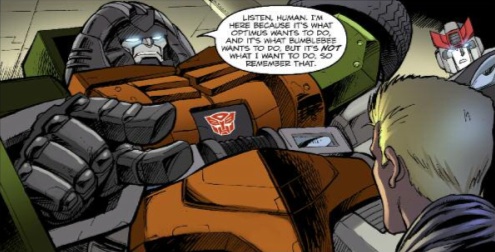 "I vill squash you, vittle bug!!" *with thick accent*
Brawn auditions for his acting debut for TF3 with Bay!


And the audience doesn't have the pockets this year or the faith in IDW right now to see it through. This isn't to say they don't have it or will never have it or that Costa as a writer doesn't have it. Just the balance is not there and I believe until that balance is found, IDW's Ongoing title will continue to flounder around. It will have moments the believers can stand behind and will continue to follow, ultimately will that pay off? It's hard to tell. We've gotten eleven issues and the payoff continues to fall short. We came into the title already spent with the setup for All Hail Megatron, will the gimmick of the Ongoing title bounce the fandom into the glorious change we've been promised? Vision is a hard thing to come by. And the execution is everything. 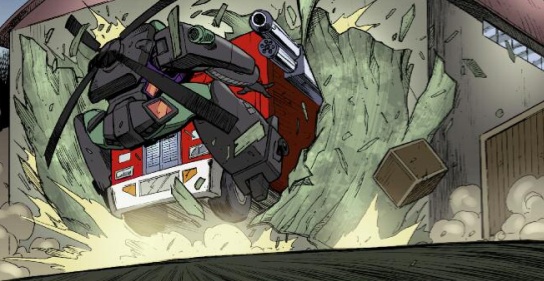 Optimus Prime: the Ride, coming when you least expect it! BOOM!


I have the vision to see Costa is a writer with potential to make a great story. He's very much the guy sitting on the couch intently trying to solve that Rubik's Cube. It's painfully obvious the perspiration coming off his brow will eventually serve him well, but I'm not going to sit around enjoying his torment. Eventually I believe someone who knows all the solves (either having studied it out, learned it, or got the darn book that explained it all) to the small enigma is going to come over, pluck the cube out of his hand, solve it for him, and set it back down in his surprised palm. Who wouldn't? I'd like to see what happens then...


If you would like to hear a more in depth, spoiler review of this comic. Check out The Underbase comic review podcast posted every Wednesday.