Wave 2 of the Hunt for the Decepticons line is reaching more and more stores. Although the majority of the wave is repaints, there is one figure that's all new. His name is Hailstorm.

Hailstorm is famous on Cybertron for his unique weapon designs, and ridiculous amount of firepower. What is less known is the fact that he's terribly clumsy - which is why he avoids fights at all costs, despite his heavy armament. Ironhide may be excited to fight him, but Hailstorm intends to fire his entire complement of missiles, and then escape under the cover of the explosions. 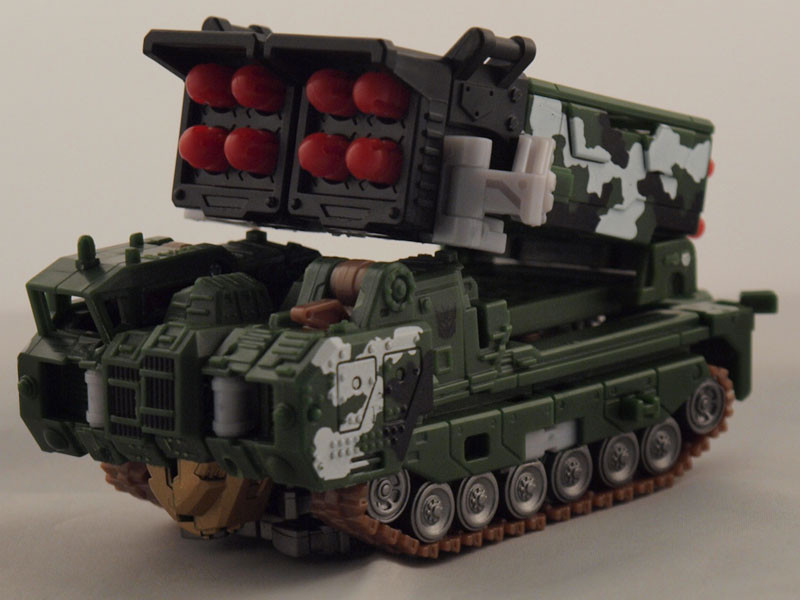 Hailstorm's alt mode is a full track missile transport. The color scheme is a forest camouflage. The treads are done in gold and there are 4 molded wheels in the tread to facilitate rolling. An open cockpit is on the right front of the carrier. The front end isn't pegged together, so it tends to be out of alignment which is slightly annoying. 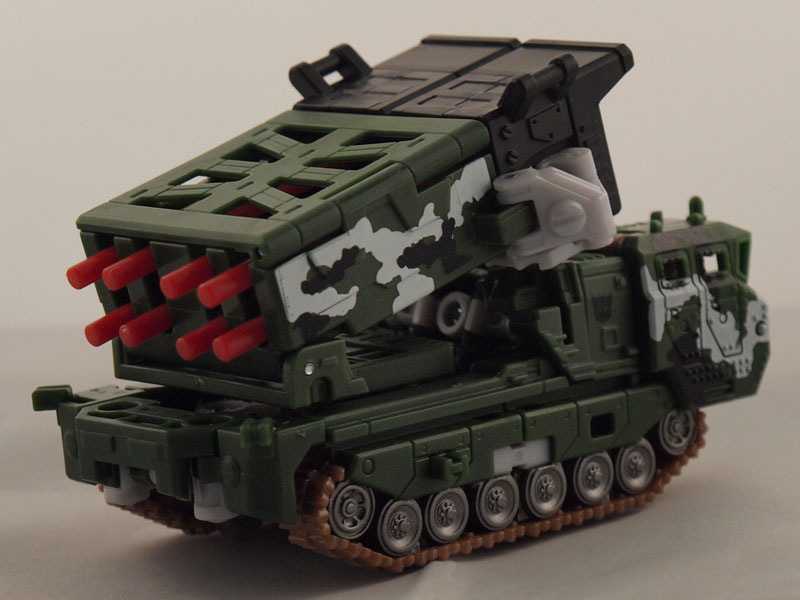 The launcher itself can be tilted 85 degrees upward and rotate a full 360 degrees. In a rarity for a Deluxe figure, there are 8 removable missiles in teh battery. Unfortunately, they are not spring loaded so you have to launch them "manually". Making things worse is that the battery tends to split in two when trying to pop the missiles out, so you have to use one hand to keep the battery together.

Pull the battery up, then pull up the top of the front end. Take the front half of the treads and half-moon them so they can make with the rear half. This will expose the arms. Flip the feet out, making sure to cantilever them so they are aligned with the legs. Push up on the waist until it locks in to the torso. Bend the knees slightly so the thighs are diagonal to the body.

Flip out the head. Rotate the battery 180 degrees so the warheads point up. Carefully pull the arms apart so that the gap in the chest gets closed. Fold the arms down against his sides. Open the trap door behind the battery. Flip each half of the battery forward, then close the trap door. On each shoulder, you'll notice a tab sticking out. Position the battery halves so each one pegs into the tab. 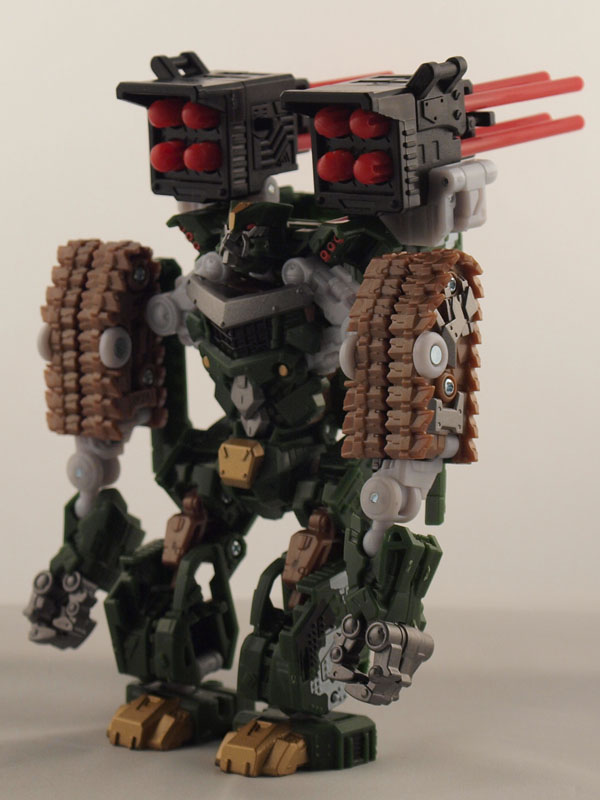 There's a short, stocky Decepticon in every line, it seems. Hailstorm fits the bill. His body is well detailed, along with the head sculpt (even if the head itself seems smallish). Depending on preference, you can sink the head into the torso or extend it out so he has a neck. 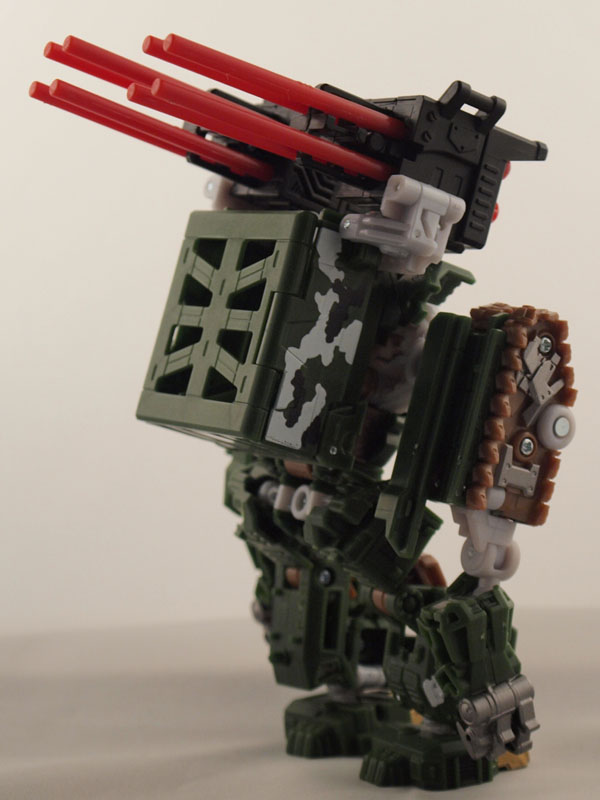 As you can probably imagine, there are balance issues due to the stalks sticking out of his backside. This is more than likely the reason for his leg positioning. The arms throw the whole package out of balance. The upper arms are about twice as long as the forearms, which looks somewhat silly. Overall, however, he's a decent figure. It makes me wonder how great he could have been as a Voyager. 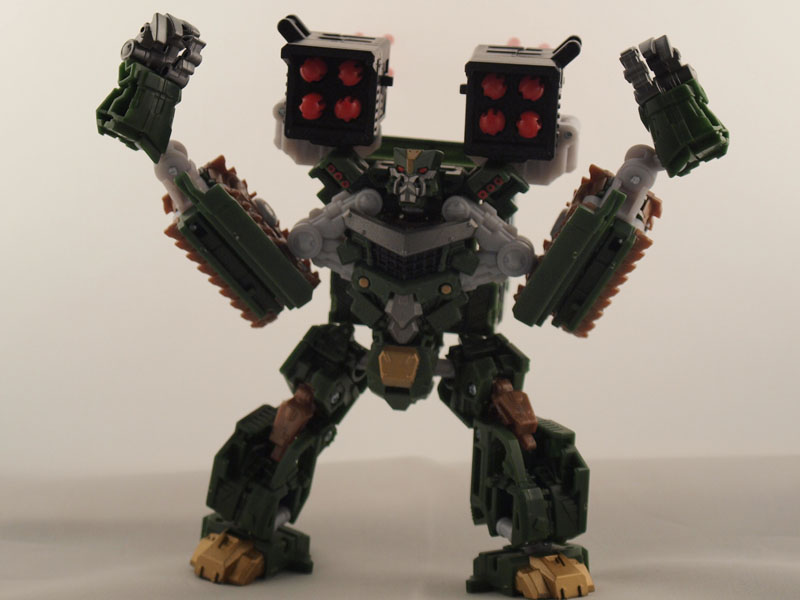 
Overall, the joints are set up good. However, back heaviness will hinder opportunities.

No good having missiles that are difficult to launch right, front end should have been peggable
Robot Mode:

Decent cannon fodder, but there's better Deluxes out there.