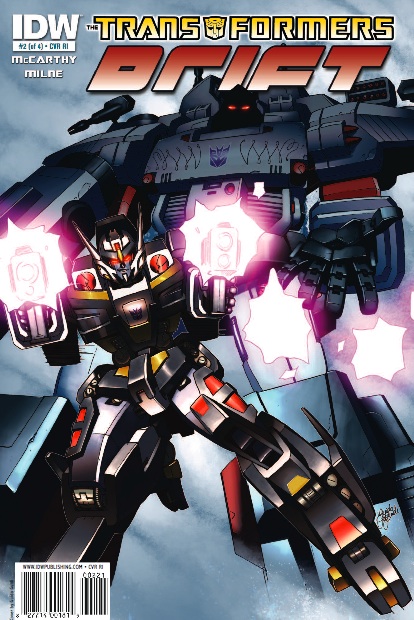 Drift issue two, written by Shane McCarthy, picks up right where issue one left off, describing the state of Cybertron when the third faction broke away to the onlooking newcomer of the New Crystal City. Drift is hardly impressed at their cowardly actions, but Wing having hit upon his need to end the war, asks the one question we hope will be answered soon. Does he want to destroy what they've built in their utopia? The members of the third faction don't trust him and leave Wing in charge of keeping him in check. As the bond between Drift and Wing strengthens, we learn of Drift's past and how it effects his future. And when the time comes for him to step forward, he ultimately strains the trust placed in him.

Drift steps out for a cigarette break, skipping out on the 3rd Faction Executive Meeting.

Wing's place in this story is becoming more and more interesting as he takes the role of giving Drift the second chance that few get. And while outwardly the utopia they live in seems perfect and happy enough, there is a hint that not all is right as Wing confronts the leadership on what they have failed to do for those who are their brothers. It's a nice dose of contradiction. While I doubt we will need more of the inner workings of the society to push the story forward, it makes one wonder how IDW may use this in the future as they have said the third faction will have influence on the rest of what goes on down the road. The interactions of the characters are well placed and authentic. It is really great to see a writer make me care about them rather than just use them as pieces on a story board. 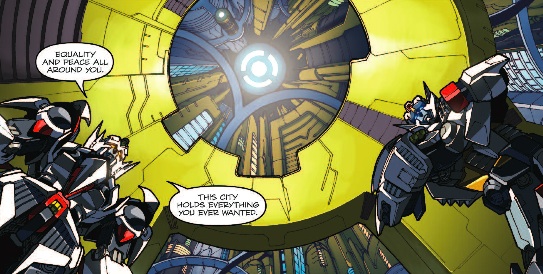 Yeah, well, this city doesn't hold a single pinball machine, and I've always wanted one of those.

The art and coloring created by Alex Milne and Josh Perez, continues to satisfy and show the story beautifully. There are several panels in this issue alone that will be forever burned in my memory. The designs of the characters are nice, and the expressions worked well to convey the emotion of the scene. It just works well and adds to the over all aesthetics of what is being told to the audience. The contrast of color in panels between the Decepticons and third faction, all well done.

I knew I should have read Eckhart Tolle's book!

So far I've hailed Drift in a good light, but this issue did have a few frowns. This is supposed to be the story where we learn how Drift pulls away from the Decepticons. I saw the development of what appeared to be the first doubts in Drift's allegiance and by the last page I wasn't sure if that took hold as well as the story had to that point developed it. It seemed to back peddle when it could have ended solidifying what it had built. While I have no idea what will come in future issues, it did give me pause and a reason to worry. Will they have enough time to show his shift over the next two issues? A considerable amount of time passes in this issue and it is conveyed in a single line of exposition, which I felt could have been better illustrated. Wing is commanded to watch Drift at all times, yet in the very meeting he is ordered, Drift is left alone? It made the concerns of the Circle of Light, which were shown very adequately in one panel, look less sincere in another. I still maintain Drift is a damaged character and this issue did continue to make me believe that. I hope as we get the next two installments next month, my fears for it are put to rest rather than fulfilled. I certainly like the story and I want to see it succeed.

If you haven't had a chance, check out the 5 page PREVIEW.