Some fans would like to think that Hasbro doesn't listen to them. They think that the only way Hasbro will remotely appease them is through repaints with G1 names and color schemes. With the War For Cybertron series, this is slightly debunked. The first wave, consisting of Optimus Prime and Bumblebee, gave fans some nice figures with great articulation, complex transformations and heavy G1 design cues. Now, with Wave 2 hitting shelves, War For Cybertron continues this trend.

Soundwave is one of the most sophisticated electronics and communications experts on Cybertron. His body is heavily armored and shielded to protect the sensitive communications gear hidden within, where he stores every byte of information he collects. He is a living storehouse of secrets. No one trusts him, but everyone understands that the data he holds could destroy them all. 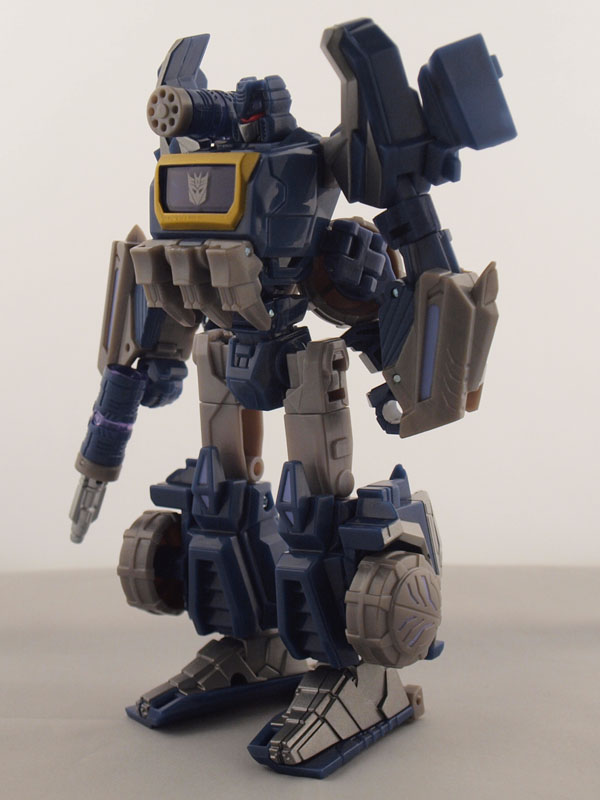 Soundwave was attempted with the Cybertron line a few years back, but it didn't exactly feel right. Looking at Soundwave in the WFC lineup, the attempt is much more striking. All the proportions are in place, as well as the color scheme. There is some lavender mixed in with the dark blue and PVC gray color scheme, but it's very subtle. The chest features a gold outline, a Decepticon insignia and a door mechanism. There are no minions within, but you can store his weapons within. 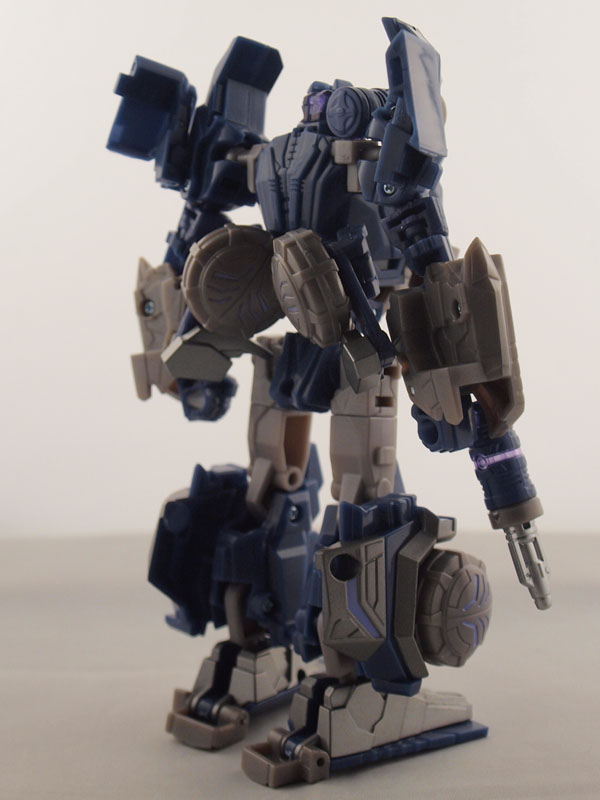 As for weapons, Soundwave carries his classic array which includes his shoulder cannon and concussion cannon. One interesting point is the head. There is purple piping, but the visor is painted red. You will get some light bleeding through the visor, but only where the red didn't stick on the paint. It makes you wonder if the original design was meant to be piped. As far as articulation, he is set up great. The only limited area is the shoulder, which has limited spread. 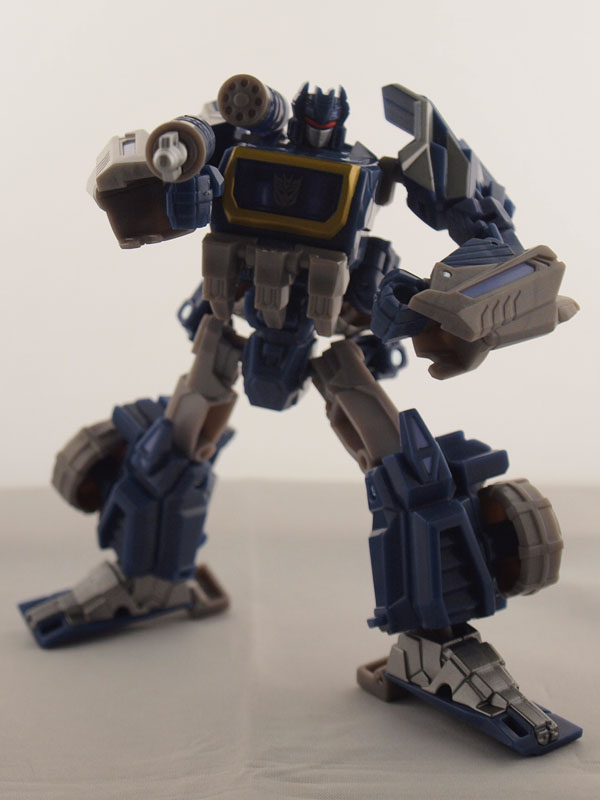 
Shoulders are limited due the ball joints being sunk. Also, the peg hinge on the elbow tends to slide out. 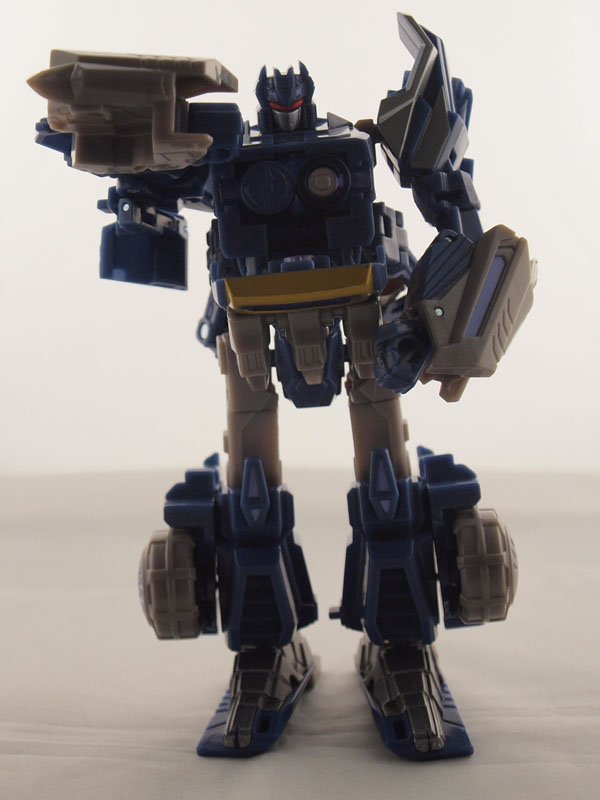 Soundwave is the easiest to transform in the lineup. After removing the weapons, push the hands into the forearms. Flip the panels behind his shoulders outward. Rotate the arms so that the front of the shoulders are level with the bottom of the chest. Flip in the shoulders so the shoulder panels meet and cover the head. Rotate the wheels behind his back to the front. Bend in the elbows to complete the front end of the alt mode. Take the hooks on each of the wheels and flip them up. Alternately, you can choose to leave them down if you want a common bumper. 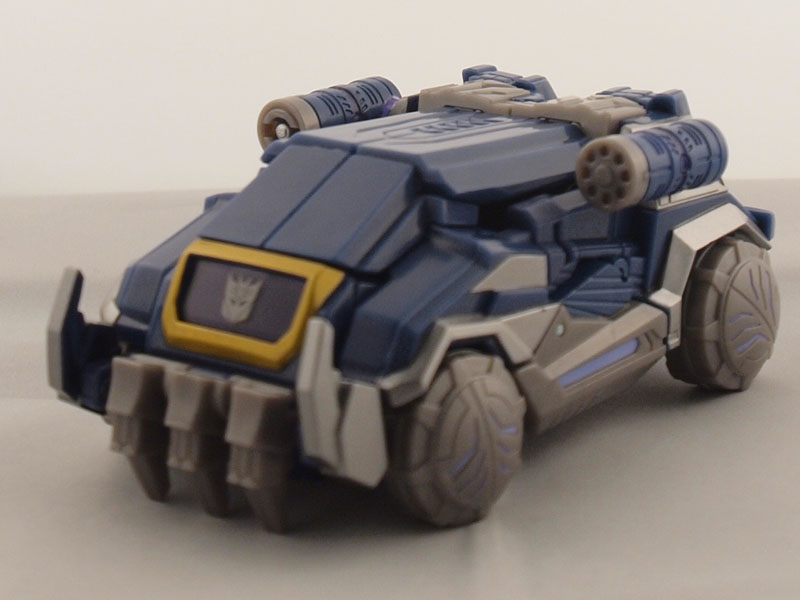 Soundwave's alt mode is an armored carrier. It certainly looks the part, with the fortified bumper and the claws on the fender corners. Even the wheels look like they're plated in thick armor. To back up the armor, the weapons from his robot mode peg onto the rear of the roofline. 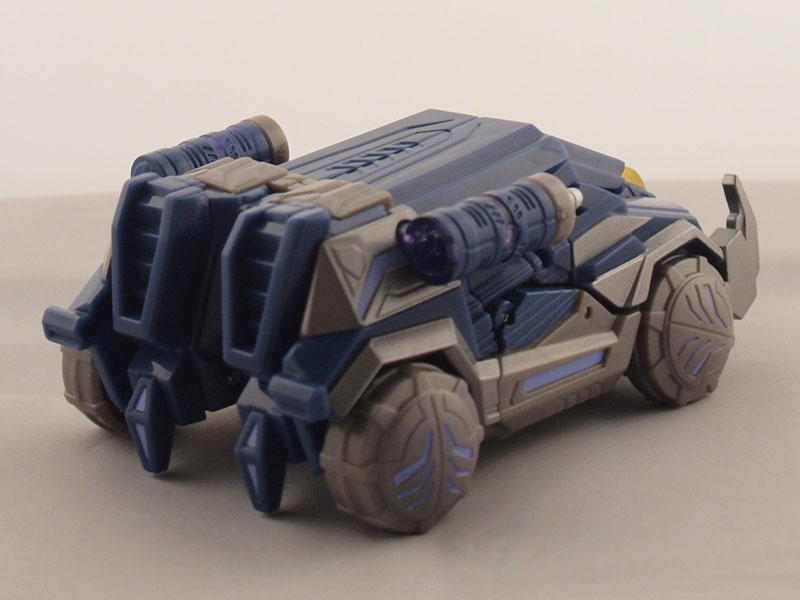 Should you choose to not put Soundwave on the offensive, the weapons can be stored in the cockpit/chest. It seems like the rear ends often get left out of the design process due to their open ended design. Although you could technically say the same for Soundwave, some strides were made to at least close the gap. There are some other small gaps in the profile, but they're small enough to not be noticeable from a distance.

Down pact G1 looks with articulation that is miles above the original
Alt Mode:

Unique alt mode that looks like it could smash a wall
Overall:

More proof that War For Cybertron was made for the fans.

Click here for War For Cybertron Soundwave via Generations Database