There's little argument that the Animated series brought back the key features of the Megatron most G1 fans grew up with. Now that the magic has been 'recaptured', Hasbro seems to be rolling along with it by giving us a Cybertronian version that not only has key G1 elements in place, but Animated cues as well.

Megatron rebuilds himself continuously. When the war first began on Cybertron, he constantly applied new modifications to catch the Autobots unaware and under prepared. His spies are always on the look out for new tech that will optimize his body into the perfect war machine. He is the bleeding edge of technology on Cybertron, and his enemies will pay the price for not keeping up. 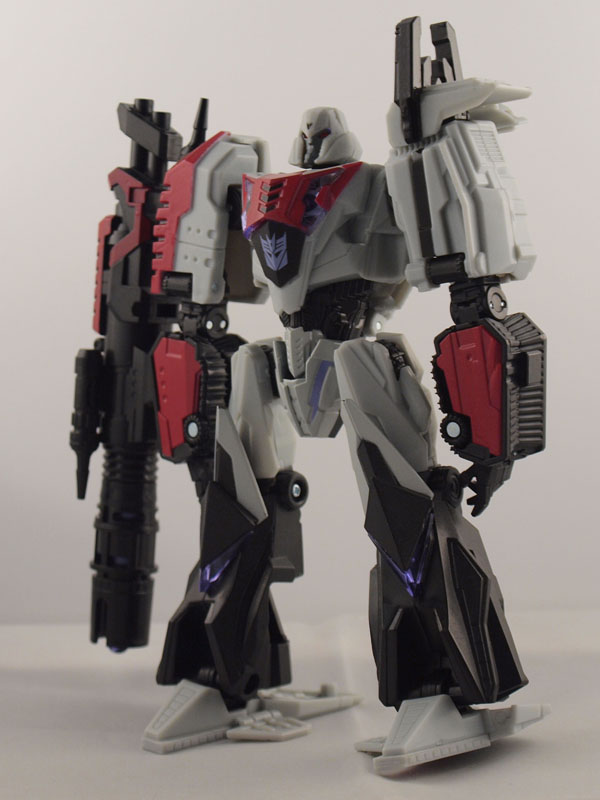 Looking at Megatron in robot mode gives a double take. Is he more like the G1 design or the Animated design? Perhaps both. He is mostly a light gray, with black lower legs and red forearms showing a black outline. His signature arm cannon pegs to either arm. His head sculpt shares the hybrid look of both G1 and Animated. Oddly, like WFC Soundwave, he has painted eyes but light piping. Due to the paint, the piping has no effect. 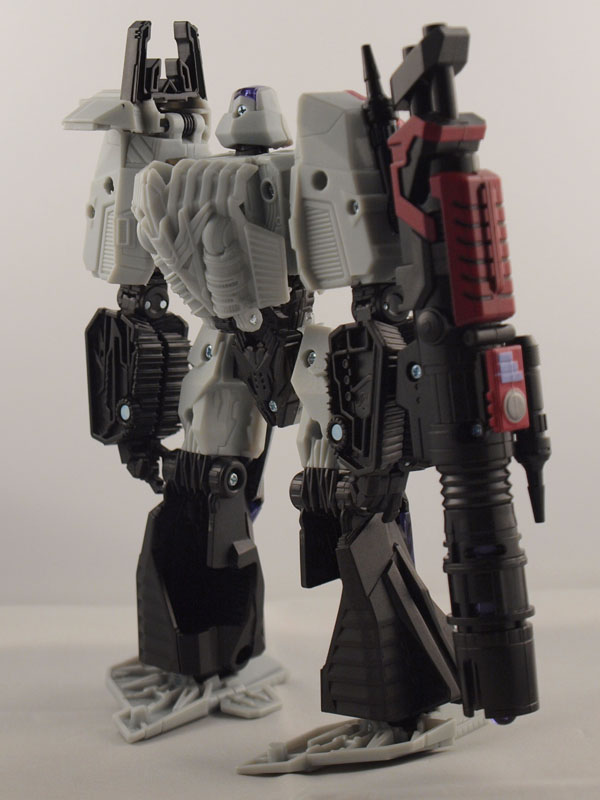 The arm cannon has a launchable missile that is activated via a trigger next to the laser sight. One very noticeable feature is the massive legs. This has the benefit of making him very stable when standing due to the huge footprint. However, the legs don't come together very close so he always has that spread out look 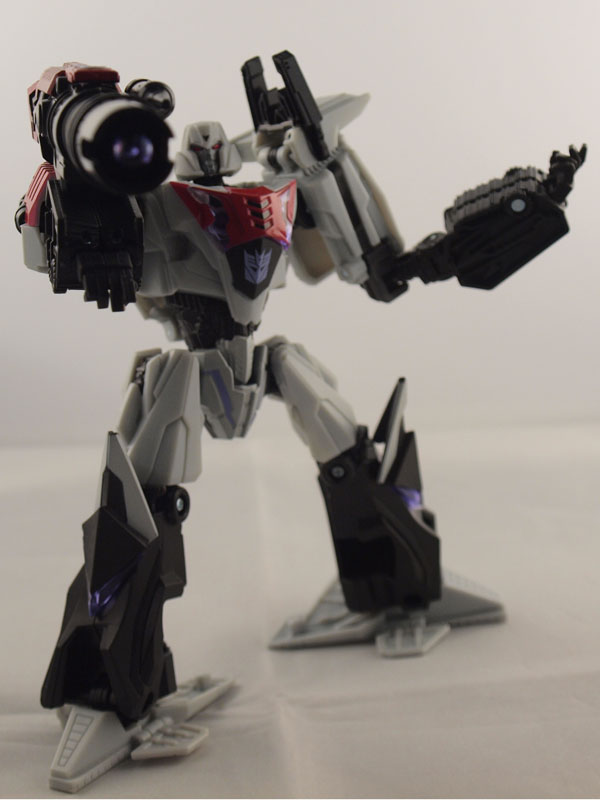 
Shoulders are the only limitation due their bulkiness. Otherwise, a very wide range of movement.

Start by removing the arm cannon. Pull the chestplate loose and cantilever it down until it aligns with the crotch. Flip down the head into the cavity in the chest. Bend the elbows 90 degrees, the flip the forearms out. Pull the forearms apart and align them so the halves are parallel to the upper arm. Fold each hand segment into the treads. Pull the backplate downward. Push the shoulders up and in slightly. Once you have them up all the way, sink the shoulders completely into the chest.

Flip the feet up into the shins. Fold in the knees 180 degrees so the shins collapse into the thighs. Pull the plate apart from the left shoulder. Rotate the plate so that the forked portion faces the top of the tank. Hinge it over to complete the front end. The arm cannon pegs into a rectangular tab on top of the hover tank, with the barrel facing the forked piece on the front. 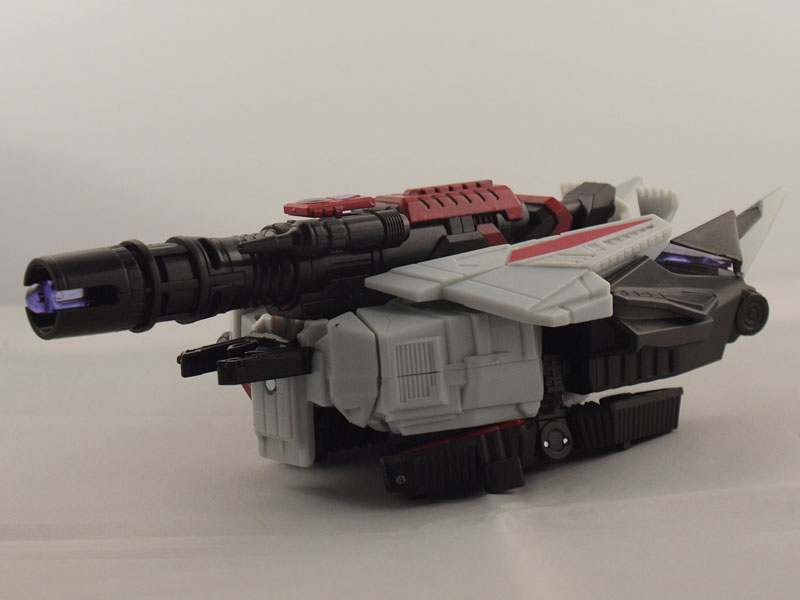 Even Megatron's alt mode has a resemblence to his Cybertronian form in the Animated series. Officially, it's considered a hover tank. Like the other WFC figures, the alt mode does a good job of masking the robot mode, as you wouldn't have a clue how it transforms for the most part. 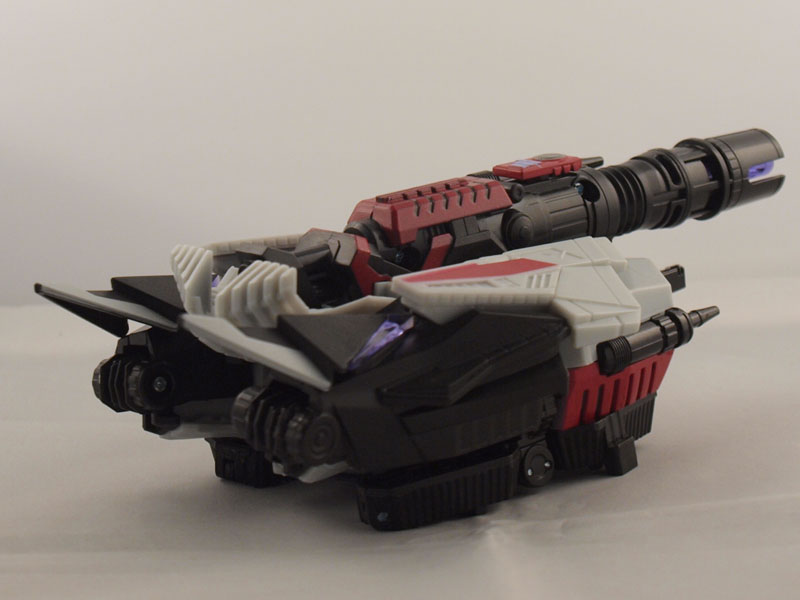 The only clue might be when you flip it on his belly, here you can see his head. However, you can't see the head of the gap in the bodywork with the turret in place, so it's a moot point. The turret, by the way, is stationary since it pegs in place at one point. While it might have been nice to have a moving turret, the design would have to be sacrificed. 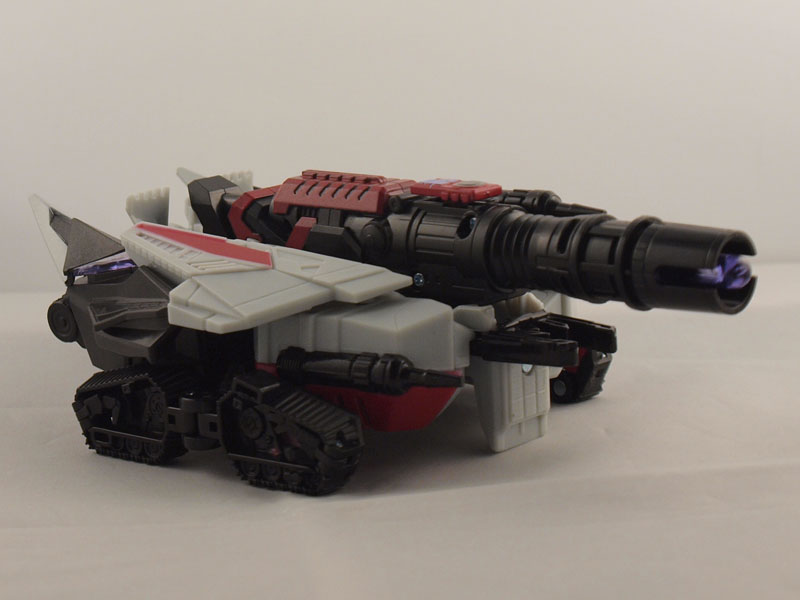 If you wish for a more traditional tank mode, simply flip out the treads from the belly and you have a ground tank. The treads have molded wheels on the bottom so he can scoot about. It would have been nice to have the treads flipped the other way. As it stands, the treads shown also show the hand segments.

While not without minor faults, this Megatron is one of the best in a long time.

Click here for War For Cybertron Megatron via Generations Database