First we had Sideswipe, which gave us the mold needed. Then we got Inferno for the partner. It made perfect sense that, eventually, Red Alert would be introduced into the fold. It took over a year, but the Generations lineup has finally given us the paranoid security director for the Autobots.

As security director for the Autobots, Red Alert tries to keep his eye on everyone and everything. All the time. He installs hidden cameras and security sensors everywhere, and keeps detailed records of the known movements of enemies and allies alike. Nothing escapes his attention, and - to him - everything is significant. His paranoia keeps him constantly on edge, but it's paid off more than once by stopping Decepticon plots before they did any damage. 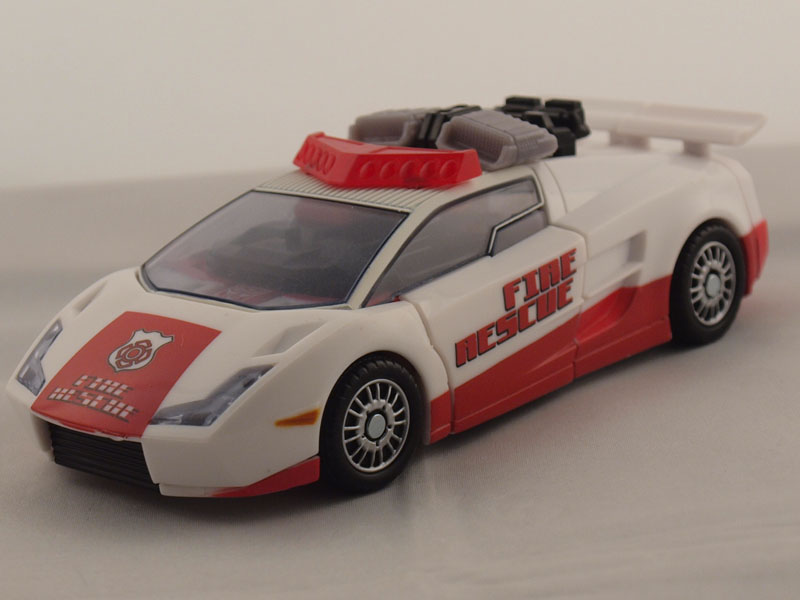 Red Alert's alt mode is the same as Sideswipe's, which is loosely based off the Lamborghini Gallardo. The mold is unchanged aside from a red lightbar on the roof. Coloring is mostly white with red ground effects. "Fire Rescue" is scripted on the hood and doors. His license plate reads "05 Alert". 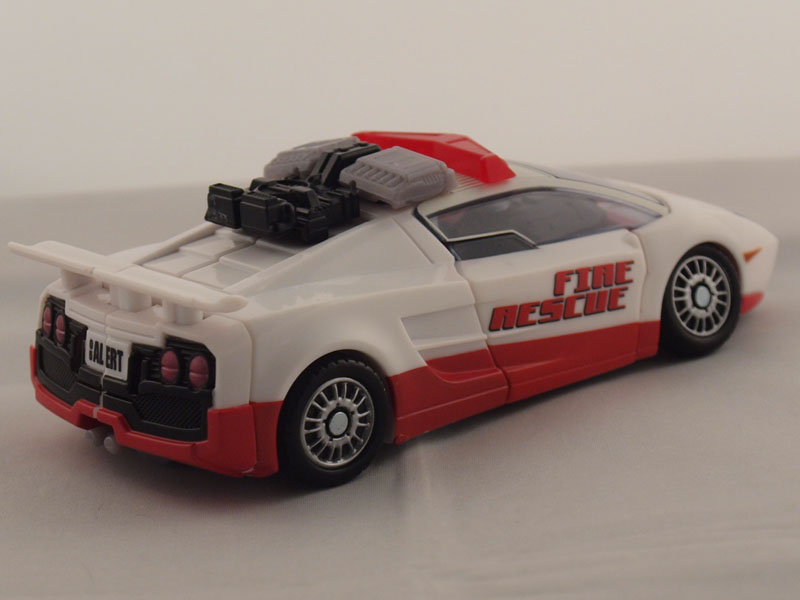 Out of the three figures that have used this mold, Red Alert seems to have the best attention to detail. The paint job in particular is uncharacteristically clean, free from overspray. Perhaps Hasbro is paying closer attention to quality control? NAH! You will notice, however, that the motor pack on the roof, as well as on the tailpipe, is unpainted.

First, remove the roof scoop and his exhaust pipe, which becomes his gun. Split the rear taillights into 2 halves and fold them up against the rear quarter panel. Grab underneath the doors and pull gently until they're unhooked. The rear end can now flip over and out to form the legs. Swivel the calves around 90 degrees and flip the feet out to finish the bottom section Rotate the waist 180 degrees. Pull on the front end to extend it outwards. Swivel the arms underneath the cockpit out 180 degrees while keeping the doors faced outwards. 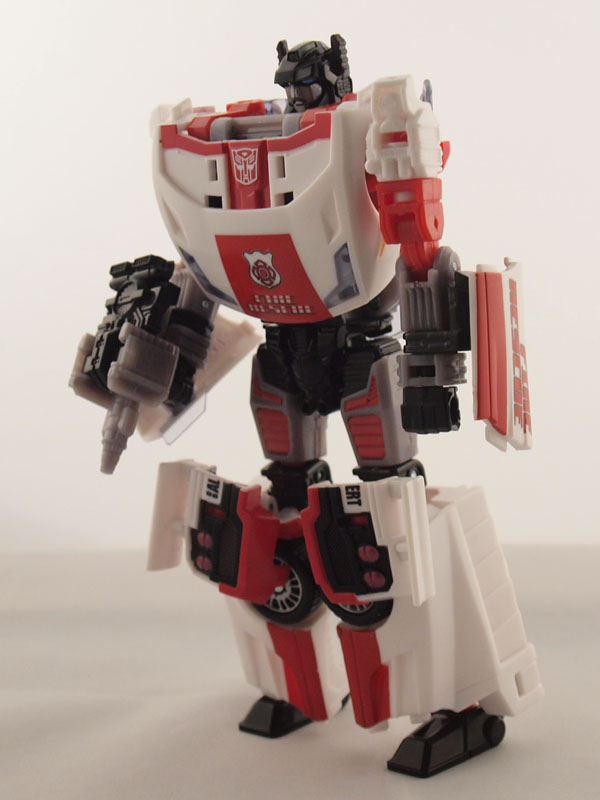 Besides the red and white paint job, there's no major differences between Sideswipe and Red Alert. The legs and forearms are PVC gray, with the groin being black. There is an Autobot insignia on the upper part of the chest that is surrounded in red. The headsculpt is unchanged. 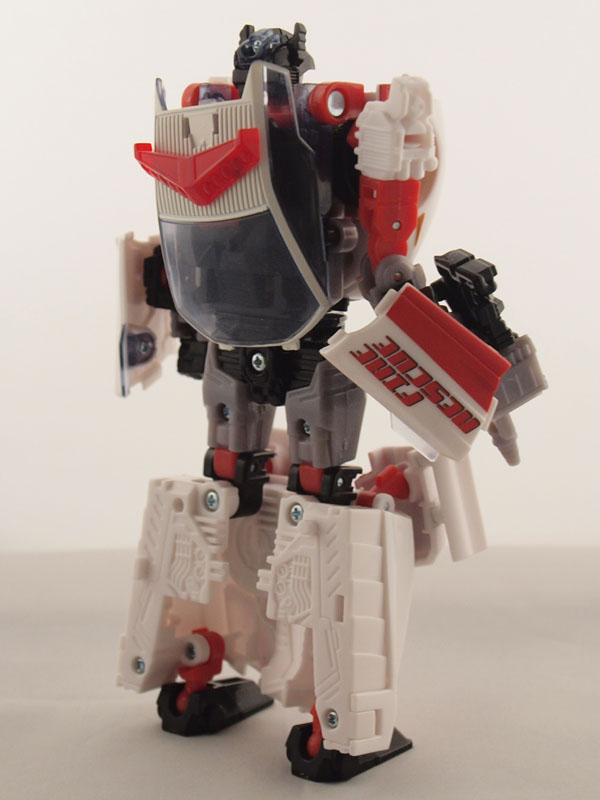 Remember earlier when I mentioned that QC seemed to be improving? Scratch that. The doors on his forearms are very floppy. The right arm especially was hard to keep in any kind of place. Also, while you can wrap the motor pack around the pistol, it doesn't mount very secure and tends to fall off. Small problems aside, I can honestly say that out of the three figures that have used this mold, Red Alert is my favorite. Oh, and in case you were wondering, you can rotate the waist and the head to get a "new" character as well. 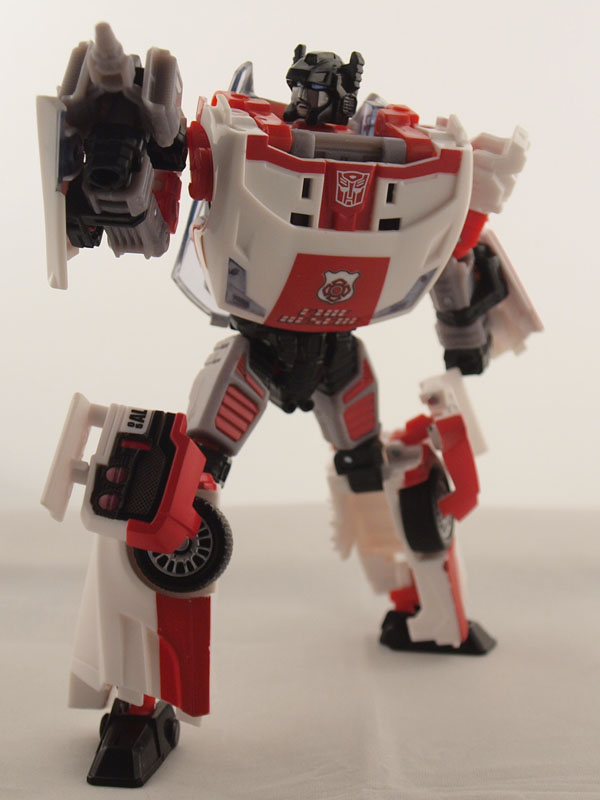 
Shoulder and hip articulation are unchanged. That is, to say, there are limitations.

:Even a third time around, this mold looks good.
Robot Mode -

:Small flaws, both in design and QC, but very manageable. Overall -

: Looks like Hasbro has finally got the whole retro thing down... for once.
Size Class: Deluxe
MSRP: $12