It used to be that scout class figures always seemed compromised. They were either brickish in their robot mode or compromised in their alt mode. These two setbacks, articulation and detail, have been improved greatly with the ROTF line. Breacher now attempts to take it to the next level with another feature Scouts haven't shown in the past: complexity.

Teamed up with his friend Seaspray, Beacher comes crashing out of the surf to deliver a nasty shock to Crankstart. The Decepticon was foolish enough to think he could hide on a remote strand on the east African shore, but Breacher is just as comfortable at sea as he is on land. 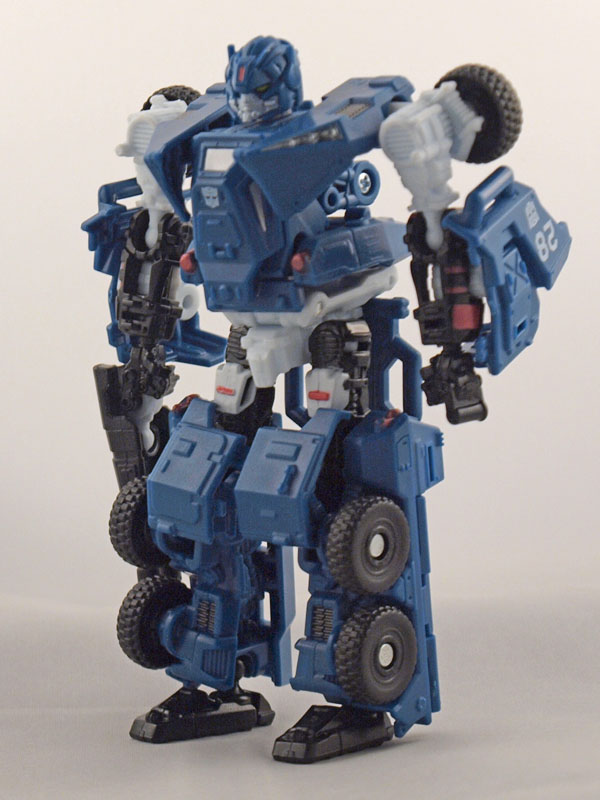 Breacher is, appropriately enough, navy blue in color. He also sports white upper limbs and black on the forearms and hips. His head sculpt contains a lot of detail but the faceplate is mostly white, which tends to hide the details. 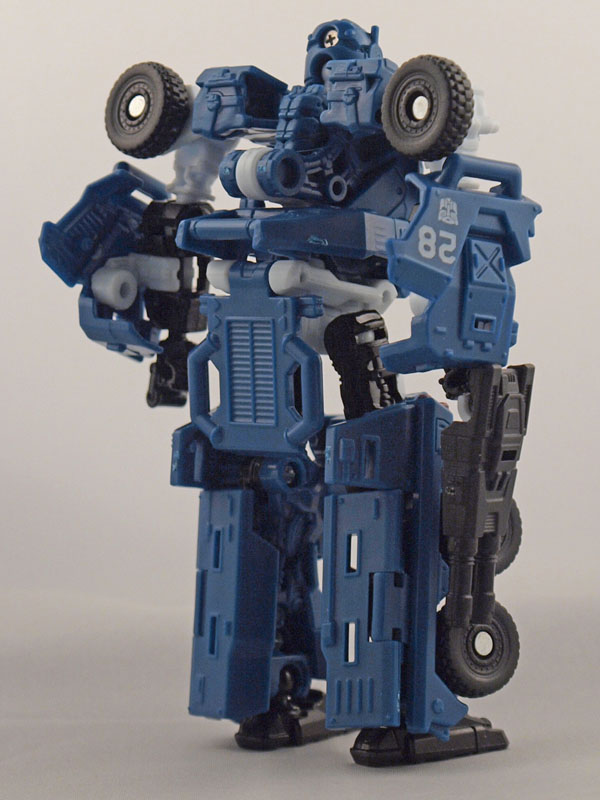 One thing Breacher does have is his twin barrel cannon. It pegs onto a bar on either hand via a horseshoe clip. These horseshoe clips (they are also found securing the doors to the forearms) are the robot mode's sole weakness. The clips are loose, so they tend to pop off rather easy. It's almost a moot point given this figure's vast attributes. 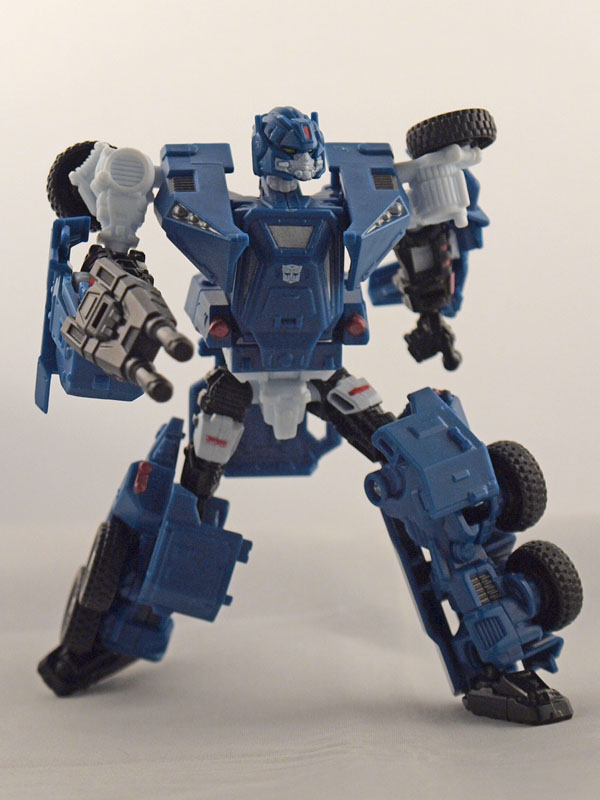 
Articulation is superb for a Scout class. You will have to reposition the back plate behind his legs to get maximum articulation.

Deluxe class transformation in a Scout class figure? You bet'cha. Rotate the elbows 180 degrees while keeping the door panels in their respective position. Fold in the hands. Pull the torso from the waist and cantilever it forward. Flip down the panel below his torso, flip the torso back to conceal the head, then rotate the alt mode cockpit to hide the head. Rotate the shoulders so the wheels point up. Lift up the backplate and rotate the waist 180 degrees.

Open the panels behind his legs. Point the toes inward, then fold the feet alongside the lower legs. Fold the legs into the thighs. Fold the rear doors into place. Close the 2 panels to complete the rear end. Noting the peg on the shoulder, fold the wheels into the front end and insert the peg into the belly. Align the tabs on the door panels to the rest of the vehicle. Insert the cannon into the bar on the turret and rotate into place. 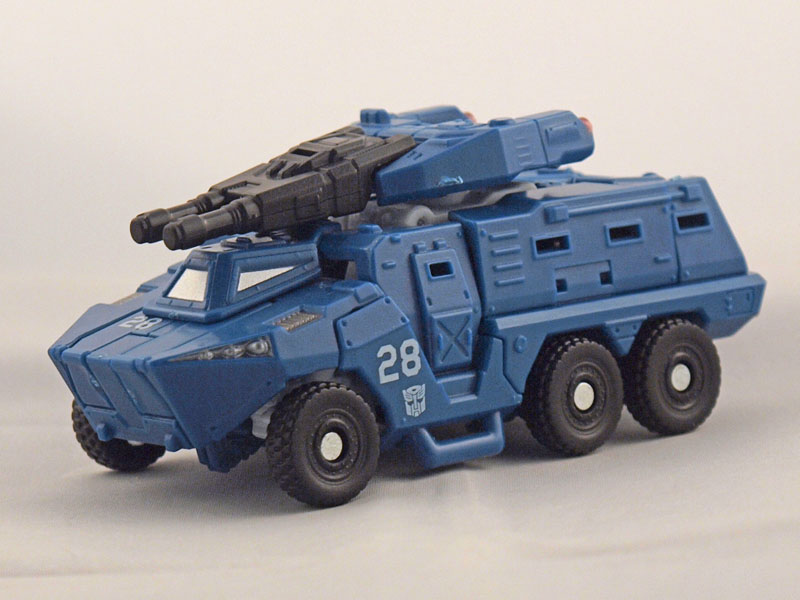 Breacher's alt mode is an armored amphibious personnel carrier (APC). Even with the small size the details are numerous. From the headlight cluster on the nose of the vehicle, to the slitted windows on the rear and the number "28" on both the nose and doors of the cab. You'll also find Autobot insignias nearby each number. 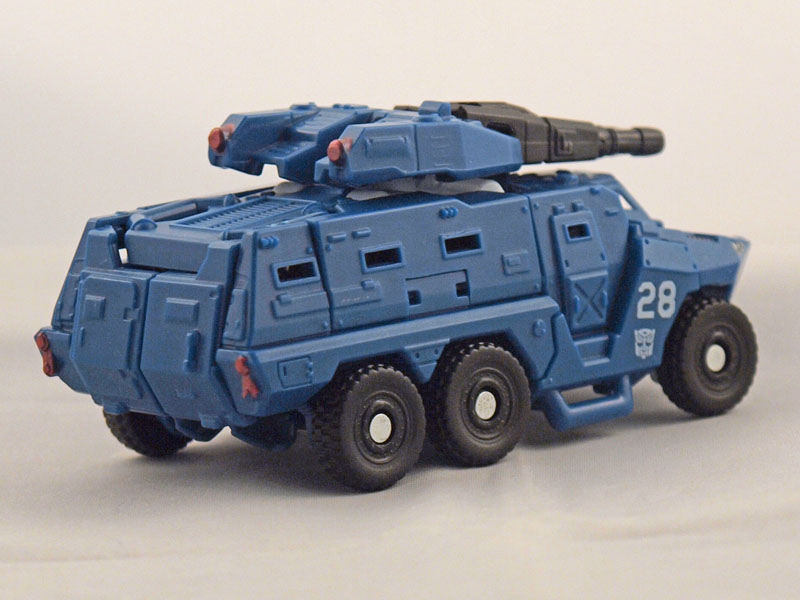 The turret features 360 degree rotation and the cannon can tilt upwards at a maximum of 75 degrees. All 6 wheels rotate on the APC, no shortcuts here like you sometimes find on Scouts. Breacher is truly the best of the best that are the Scouts in this line. He's packed with Deluxe class features in a Scout class price. One can only hope that Hasbro sees the value of this and continues to evolve the Scouts, and the rest of the classes, in attempts to further push the envelope.

Articulation and detail are tops, weapon is a plus.
Alt Mode:

Proof that big things can come in small packages AND be done right.