Sometimes, in the myriad deluge of repaints, Hasbro sneaks in a retooling. You might not catch it at first, but a simple pause for a closer look will tell you this isn't the same mold that's been redecorated. Sideswipe has already had one repaint, but his latest Deluxe release is more than just a new paint job.

Sideswipe generally prefers his swords, but just recently, Ironhide has convinced him to give blasters another chance. As it turns out, the flare launchers he's been practicing with will be perfect against Decepticon hand-to-hand specialist Axor. The evil warrior thinks he's going blade to blade against his Autobot counterpart, but he's in for a nasty surprise. . 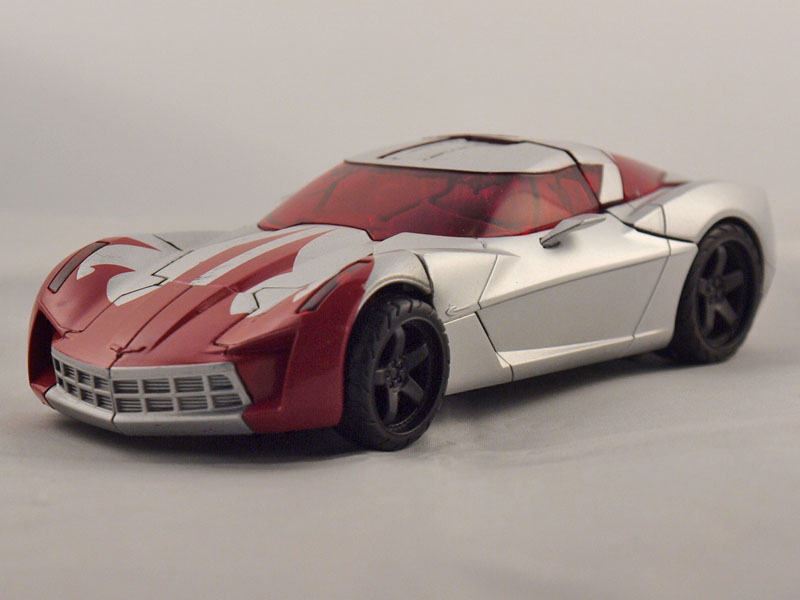 A quick glance might make you miss the fact that this is virtually a whole new figure. After all, the basic dimensiona and design of the alt mode are similar. It's also not the best repaint. The silver paint job is still dominant, but the front end is now cursed with red artwork. All four wheels are blacked out, and all the windows are done in red. The rear license plate has an Autobot insignia now, but the tail lights have been left unpainted. 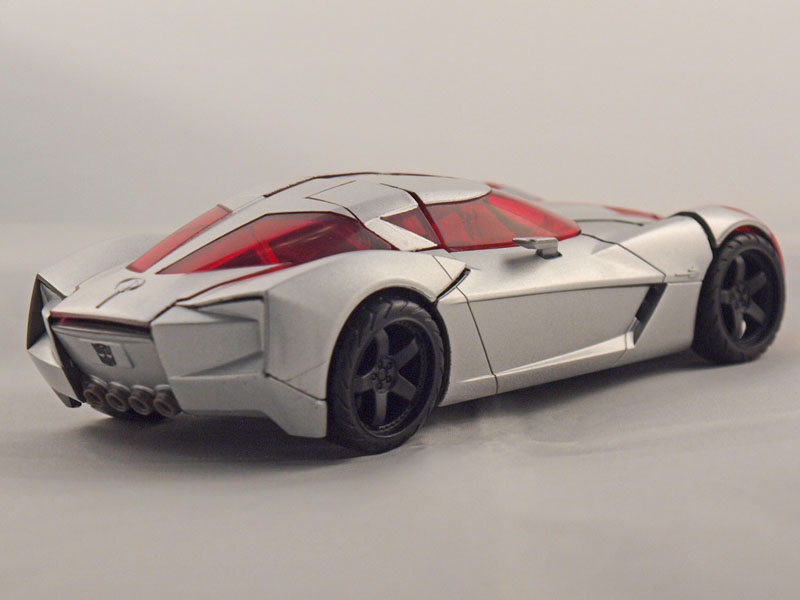 Look up close and you can definitely tell this is a new mold. There are crease lines everywhere, including the hood and roof. What makes it bad is that the gaps are pretty noticeable. This is partially due to there not being a very positive locking system for the seams. One positive of the new alt mode is the new gimmick involved. 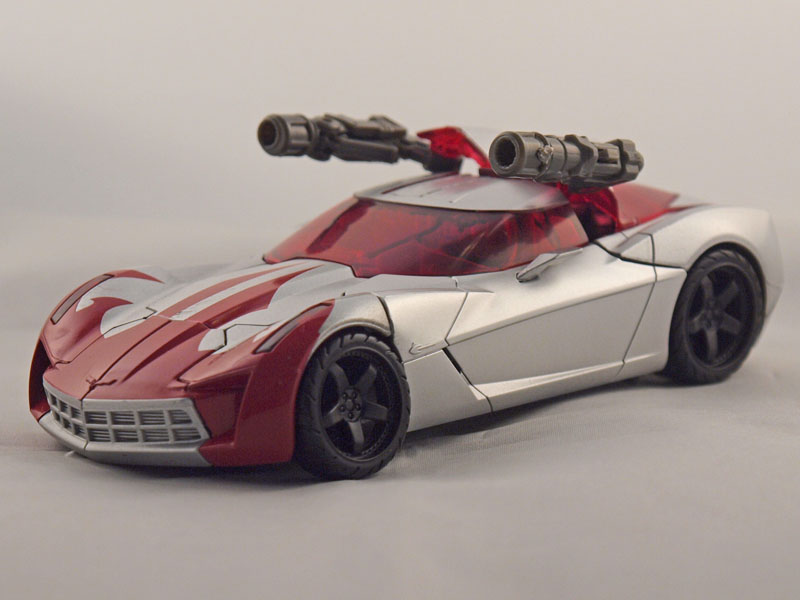 By lifting up his rear end, you can swing out two cannons from within the rear glass. They perch on winglets so you can fold down the rear end again. While a cool feature, the downside is that you'll spend time trying to align all the seams back together.

This is where the retooling becomes clearly evident. Start by pulling the doors out, then back. Separate the front end and pull it to the sides. Dislodge the legs from the belly of the car. Flip the legs out 180 degrees. Push the legs in while holding the waist in order to set up the leg joints. Flip out the feet. Grab the rear end of the vehicle and rotate it 180 degrees.

Separate the back glass from the quarterpanels. Flip out the chest armor from under the quarterpanels. Spread the arms out in full. Pull the rear end down so that the tail section becomes the chest. The chest plate locks into the hips via a slide tab. Position the doors against the back as desired. Take the grille of each half of the front end and rotate it inward 90 degrees. This will allow the hands to flip out. Push the grille plate into the forearms. Pull the head out to finish. You might need a smooth object to pry the head out, as it's stubborn to release. 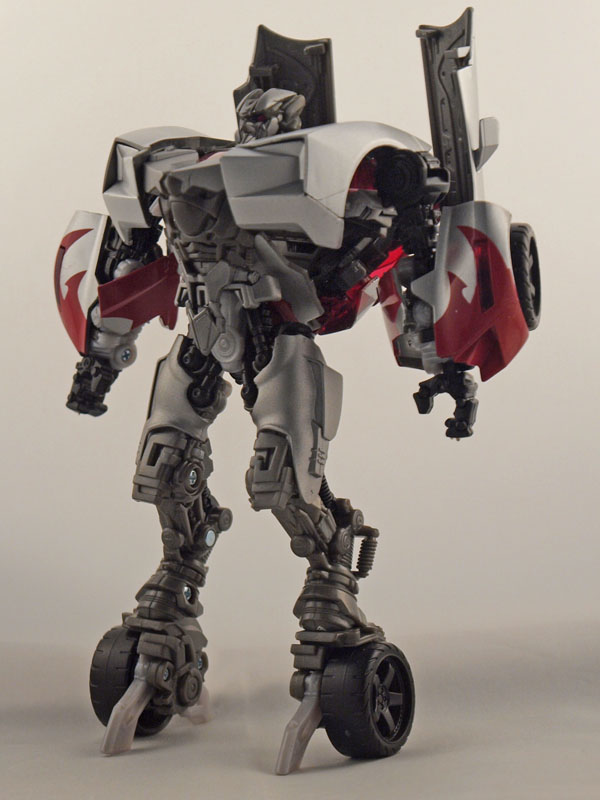 Whatever shortfalls the alt mode had become almost forgettable in the robot mode. The differences between the original mold and this one are subtle but help the character out immensely. The footprint, and subsequent balancing, has been greatly improved. However, the head is quite small for the body, though it features good detail along with red piping. 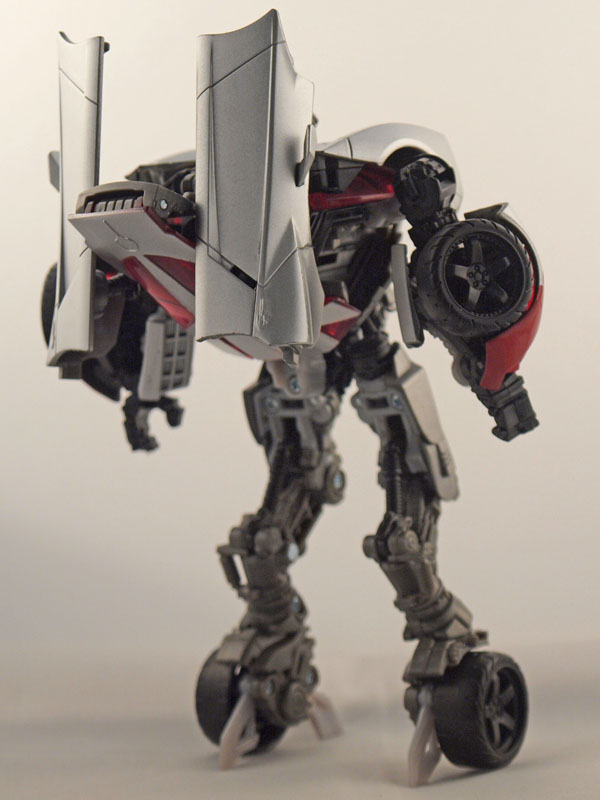 Though there are no swords here, you do have the pistols. Remove them from the peg on the rear end and slip them into each open ended hand. They fight nice and tight despite the hands being open. Also, for those who are curious, Generations Drift's longsword can fit into Sideswipe's hand. However, you have to position the handle of the sword longwise to get a grip in his hand. Who said you can't have the best of both worlds? 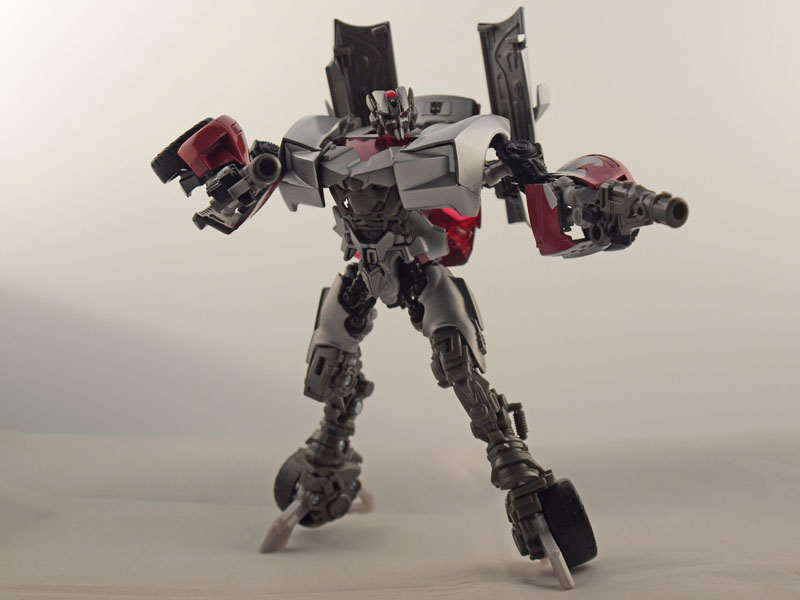 Sometimes, you have to take the good with the bad. A decent retool, but could have been better.