It's been some time since Tuner Mudflap started clogging shelves. In fact, he still does. However, that doesn't deter Hasbro from giving his brother the same kind of treatment.

Oil Pan may have crazy good driving skills, but he's not used to dealing with someone as unpredictable as Autobot Skids. The Autobot is more than happy to cause total chaos on the freeway, as long as it means catching his quarry. The other Autobots might wish he was more careful, but at least he gets the job done. 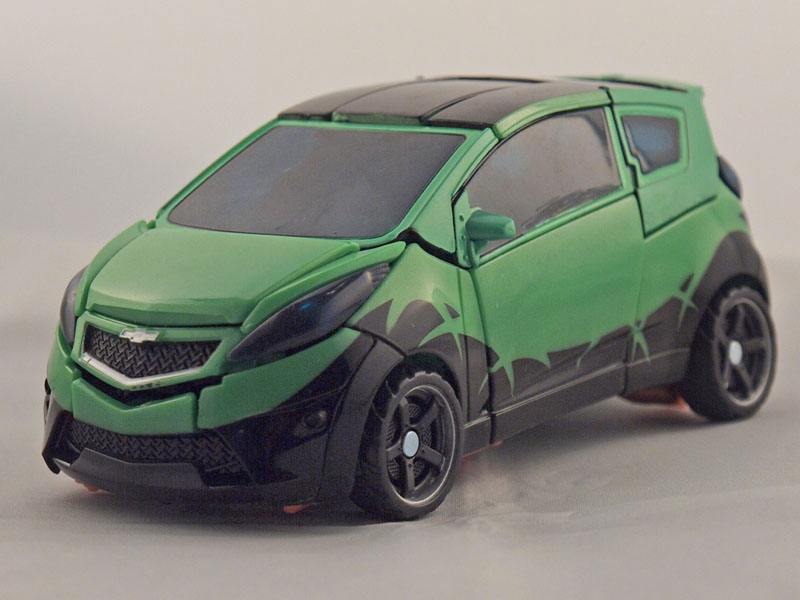 Like his brother Mudflap, Skids gets some visual enhancements for the Tuner mod. A welcome change is the primary paint job, which is a darker green. He also trades in his splash side panel effects for more earthen ground effects. Other enhancements include black out headlights and color coded hood. 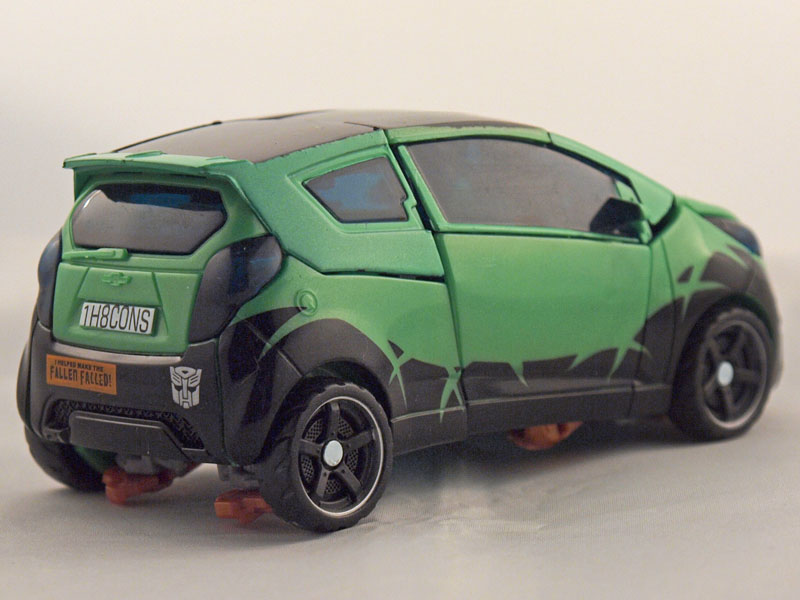 The glass is now tinted throughout, as well as the tail light assembly. Skids is also a bit outspoken in his alt mode with a vanity plate that reads "IH8CONS" (I hate 'cons). If that wasn't enough of a hint, he also sports a bumper sticker which reads "I helped make The Fallen falled". Obviously, good english isn't his strong suit. A tasteful redux of the alt mode, overall.. 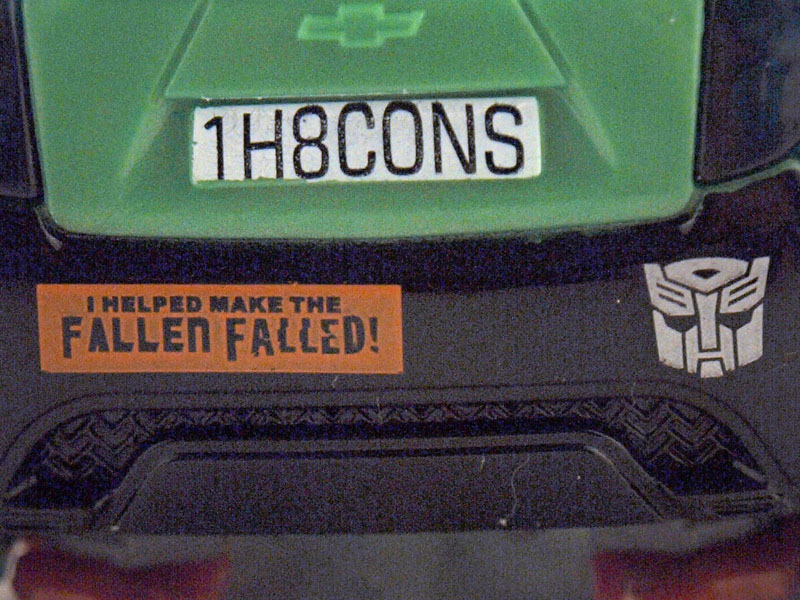 Separate the front panels and doors from the rest of the car and rotate them down 90 degrees. Pull down the legs and flip out the feet. Fold the door windows into the panels, then wrap the doors around the lower legs, connecting the hole inside the door panel to the peg inside his leg. Pull out both rear fenders, then slightly pull them forward. Fold the hood into the windshield.

It might take some force, but collapse the center roof panel's back into the cockpit while pulling the windshield up above the roofline. Rotate the arms so the fists point back but the wheels stay in position. Point the rear end straight up. You should then be able to rotate it 180 degrees. Flip out the head, rest the front end against the spine of the rear end and rotate the arms down. Connect a tab on the hatchback to the notch just behind his head. Align arms and shoulder panels to round things off. 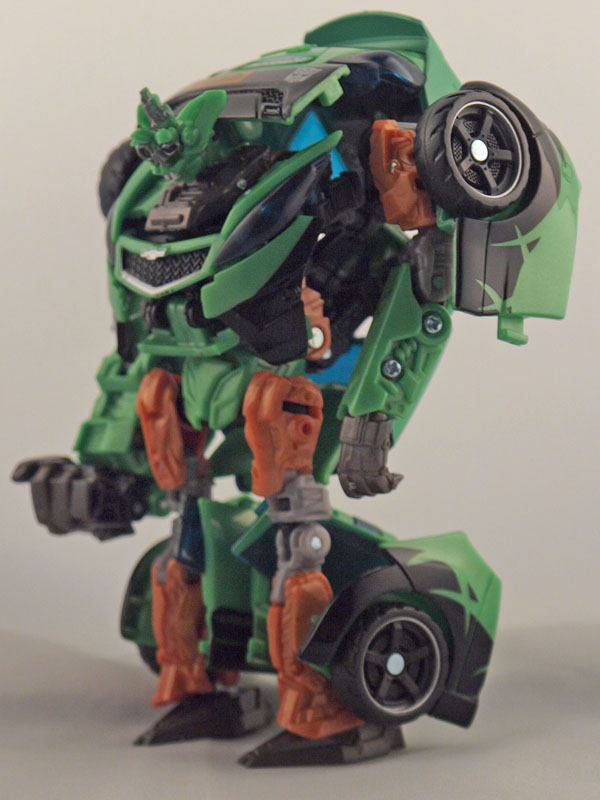 The robot mode also gets a more tasteful color palette. Gone is the medium green in the limbs, replaced by a copper paint job. His extremities are now done in dark gray versus the light gray in the original. Even the head sculpt, which is unchanged, looks better in the darker green. 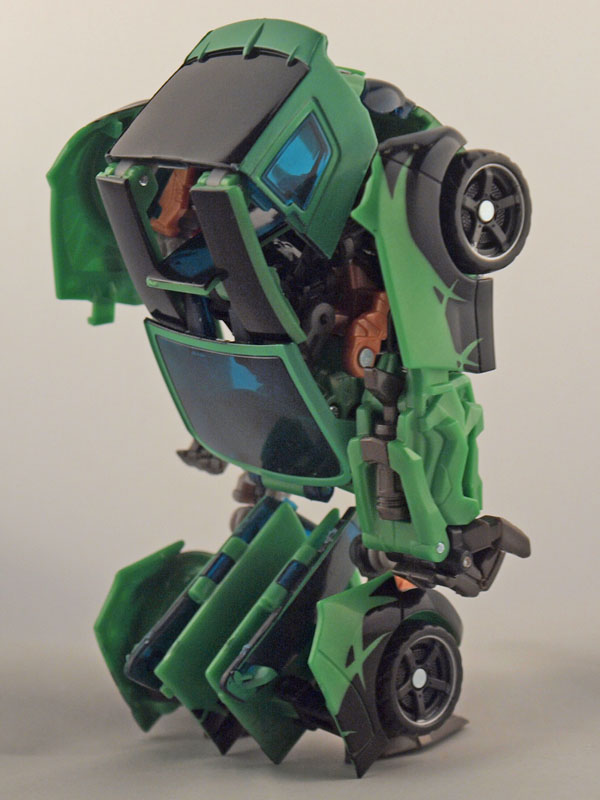 If you were looking for any retooling or added features, stop looking. This is merely a repaint. However, it is a well thought out repaint. Where the original stood out as bright and somewhat garish, Tuner Skids is much more pleasing to the eye. Hopefully, he won;t end up clogging the shelves like his brother still does.. 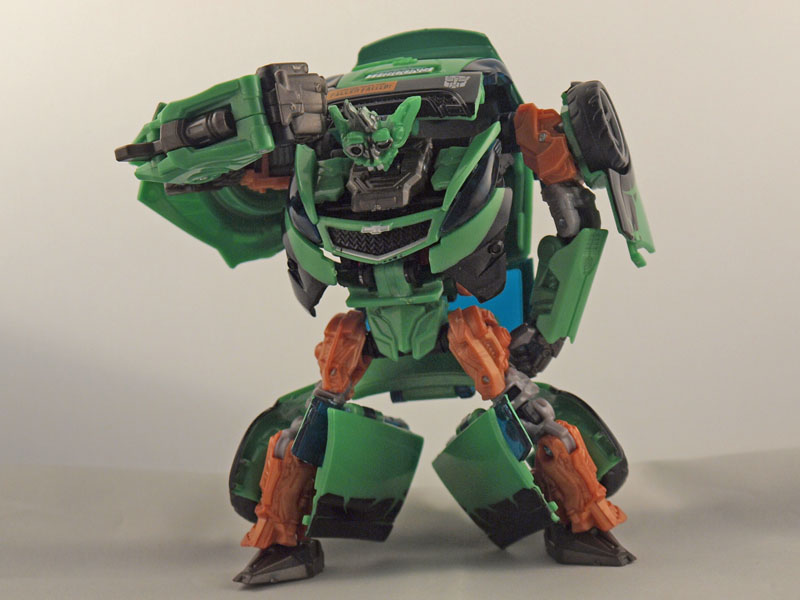 
There is kibble to contend with, mostly on the lower legs and back. However, he is quite flexible and allows for some good posing.

Panel fit is the only sore point, as with the original
Robot Mode:

The head still is the ugly point, but it's now surrounded by a much better paint scheme.