Some people are so busy fretting about what G1 homage is going to be paid next that they forget there was a Generation 2 line. Well, it looks like Hasbro hasn't forgot, as they have included a tribute to one such G2 character for the Power Core Combiner line. This time, however, Leadfoot makes do with a minicon partner.

Leadfoot gained fame among the Autobots as a first class infiltrator. Combined with Pinpoint, he becomes invisible to Decepticon sensors. His hypertuned engine gives him the speed he needs to be in and out of an enemy base before a single alarm can be tripped. 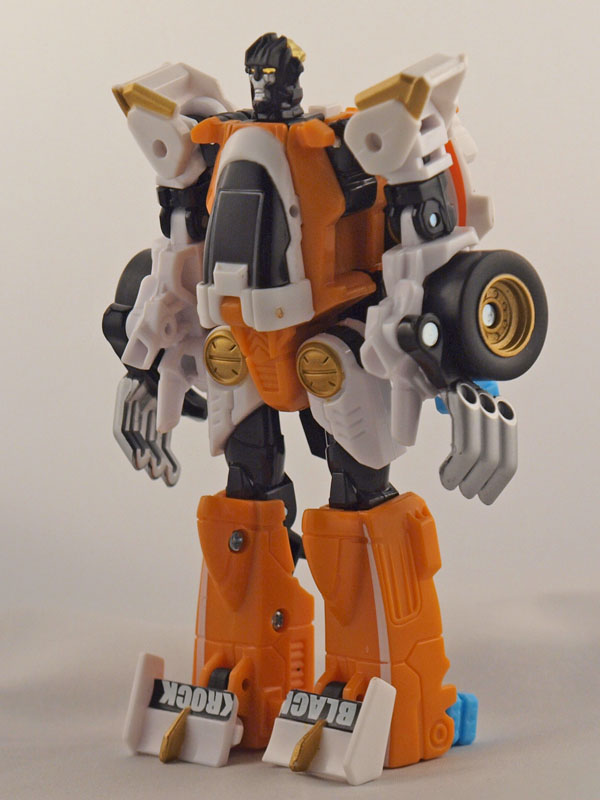 The first thing you will likely notice about Leadfoot is he has, um, some big hands. That aside, his light orange and white motif suits well on the figure. What doesn't suit so well is the head sculpt, which is rather mundane, if not small. 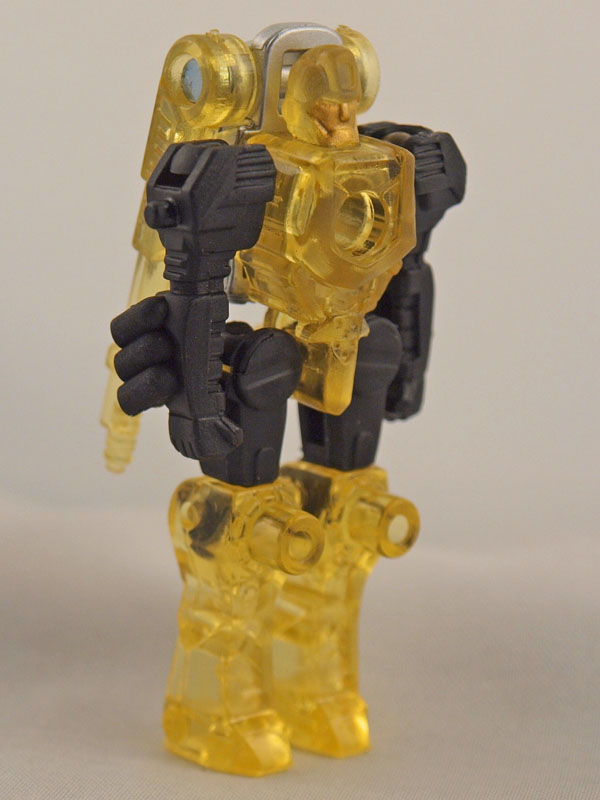 For his minicon, Leadfoot has Pinpoint. The name was previously for a G1 Targetmaster, which suits just fine being he can form Leadfoot's hand weapon. Leg articulation is good, and besides the lack of elbows the arms have good joints. He is also well armed, as he can hoist shoulder cannons from his back. 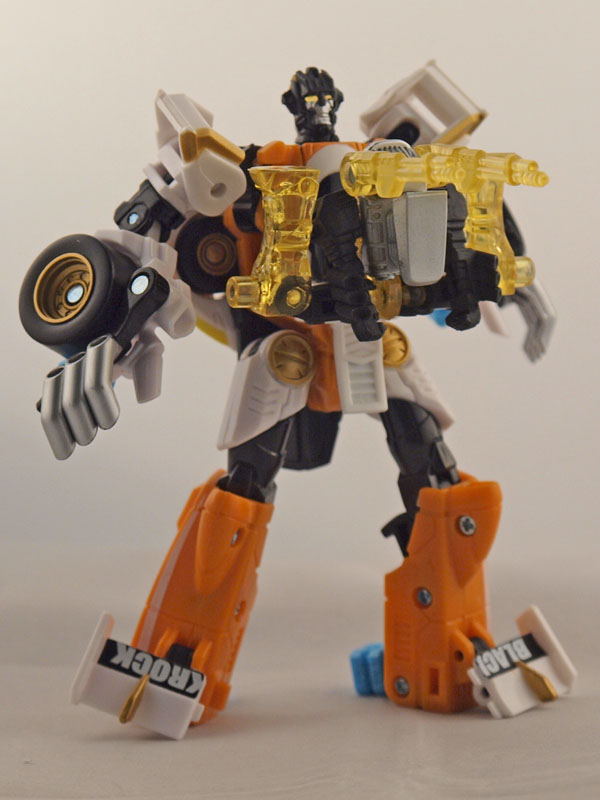 Push the arms back slightly, spread out the legs, bend the knees and twist the hips so that the legs side alongside his head. Flip open the trap door on Leadfoot's chest to expose a minicon port. Plug in Pinpoint and you now have his chest armor. You can also flip up the gun barrels to have a weapon. 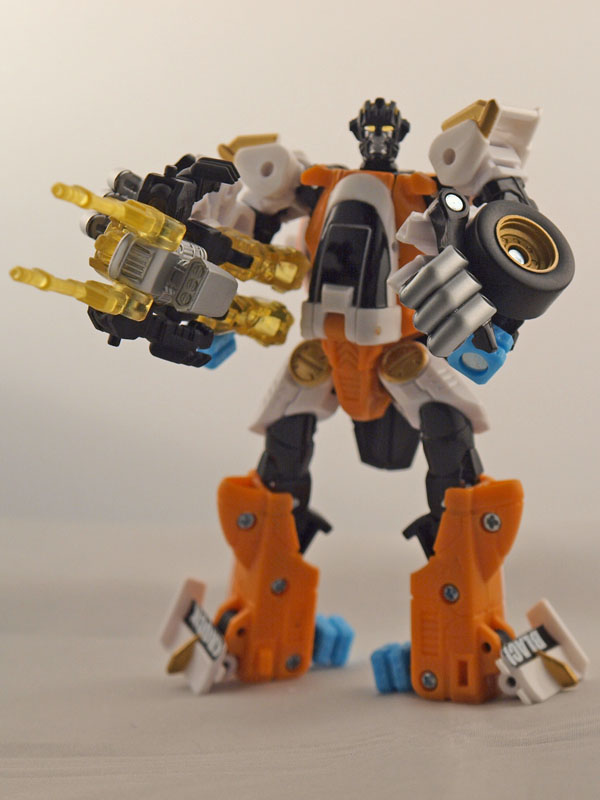 For Leadfoot's hand weapon, simply point the barrels straight up. There is a minicon peg near each knee on Pinpoint where he can plug in to either of Leadfoot's forearms. Not the most creative use..


To get rearward leg bending, you'll have to move his backplate a bit. The legs are incredibly stiff, so they might take some effort to pose. Which can be a good thing.

Take the combiner ports that support his feet and flip them down. Pull the shins away from the knee until you hear a "snap". You can then fold the shins into the thighs. Peg the legs (and the spoiler) together. Pull on the arms and cantilever them so the shoulders sit near the waist. His fingers will half-moon over to form the exhaust. If you look where his fingers were, you'll see a peg. Insert the peg into the small tab under his lower legs to lock the rear wheels in place. Fold up his shoulder plates until they flush in with the cockpit area. Bring the nose of the car around from his back and peg into place. Lift up the front wheels to finish. 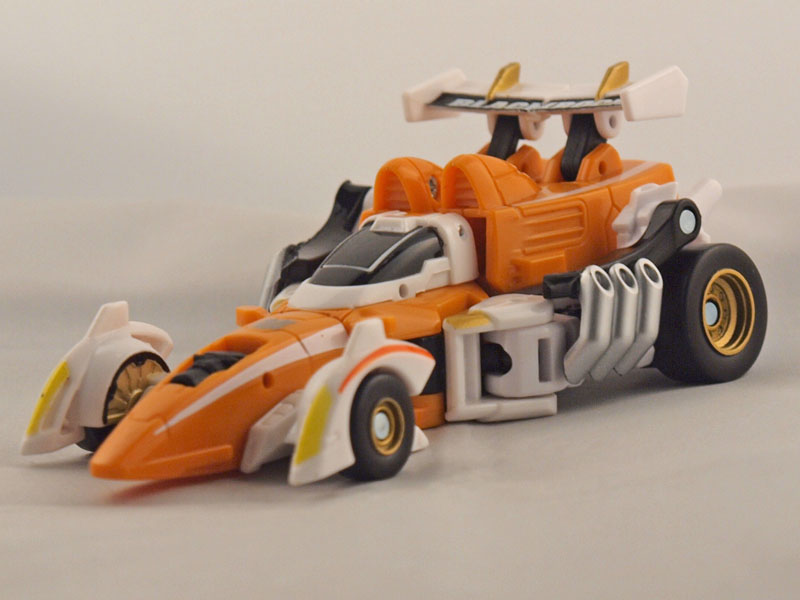 His alt mode resembles a Formula 1 race car. The orange and white motif remain, although there's less white in alt mode. Also note the "Blackrock" script on his spoiler, a throwback to the Marvel G1 comics. 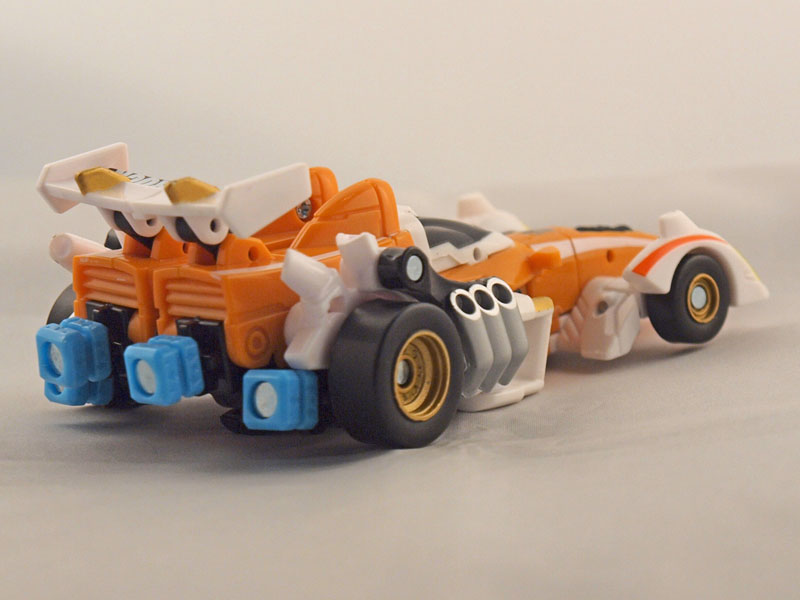 The combiner ports do a good job of doubling as exhaust ports. This is on top of the 6 exhaust pipes already on his sides. A very well thought out alt mode, overall. 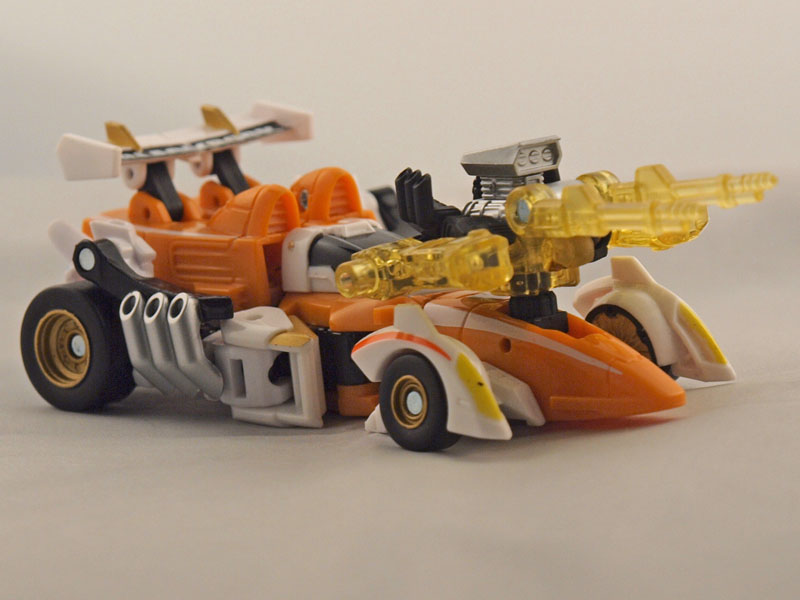 With Pinpoint in his Armor mode, you can plug him into the nose of Leadfoot via a concealed minicon port. The combined look sports a blower motor. Now, you get extra speed and, if you flip the barrels forward, extra firepower.

To convert to Combiner mode, Pull down on his chest plate. Spin the Commander mode head around 180 degrees to expose the Combiner mode head. Close the chest plate. Spread the legs out 90 degrees. Twist the knees 90 degrees so that the front of the legs bend down and point to the back. Fold down the combiner ports. Fold in the shoulder plates, then twist the shoulders 90 degrees so that the tires face the nose of the alt mode. This is the front of the combined mode. Bend the elbows so that the exhaust pipes point straight up. Position the combiner ports on the forearms to finish. 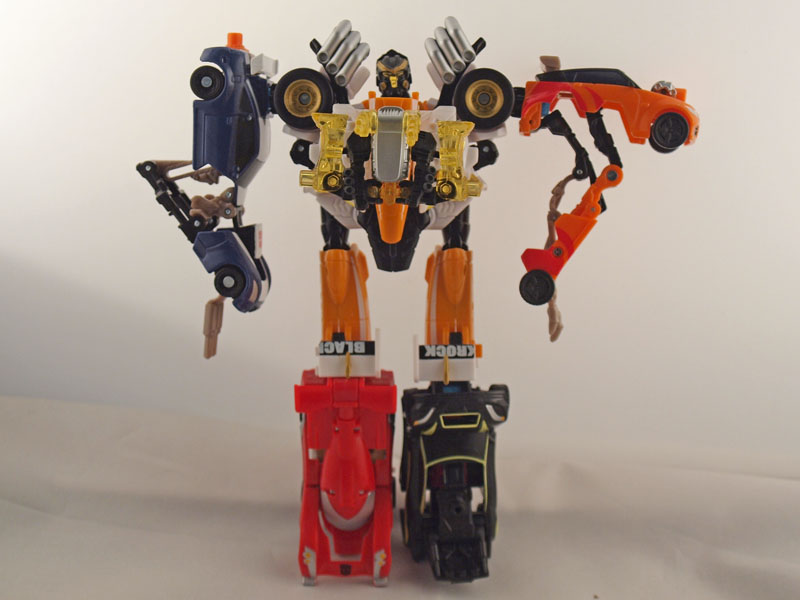 It still holds true that the 2 pack combiners make better combiner bodies than the 5 packs. Although the head sits a bit farther back than I'd like, overall he's probably the best Autobot combiner body currently. The only nag is that the shoulders don't lock in place.

Score another one for the 2pack combiners in the combined mode.
Overall:

While the minicon might be shortchanged, Leadfoot himself makes a triumphant return to the TF universe.